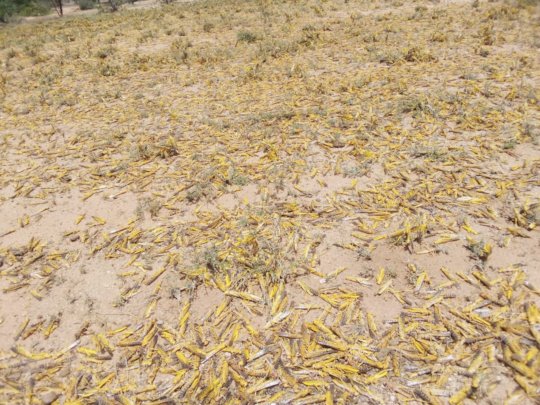 Concern Worldwide has launched an emergency appeal for funds to prevent a major humanitarian crisis in East Africa as massive swarms of desert locusts threaten food supplies of 13 million people.

“Swarms of locusts are sweeping through the region eating everything in sight – leaves, crops and grass,” Concern’s Director of International Programs Anne O’Mahony said. “A swarm can strip a field in minutes.”

“For pastoralist farmers it means they have no fodder for their livestock. Farmers who were preparing to harvest crops have watched as locusts devoured both their plants and the seeds they need for next year’s crop. It is a disaster.”

“It is just so unfair for these vulnerable communities who have come through years of drought and were then hit by flooding to see them lose everything in this way.”

Massive swarms of locusts are devouring entire fields of crops in as little as 30 seconds and fueling fears of a major food crisis in some of the world’s poorest countries. Communities in Kenya, Ethiopia and Somalia are facing alarming food shortages with the crops they grow to survive being eaten in seconds by flying desert locusts.

“It only takes 30 seconds for a swarm to eat an entire field,” said Concern Kenya Country Director Amina Abdulla. “Millions of locusts are eating all vegetation in their path including food crops that are absolutely crucial for survival here.”

Amina said the devastating swarms – which have made headlines around the world as affected countries declare national emergencies – recently split into two directions in Kenya, heading west and south.

“This is extremely worrying and has major implications for Kenya in terms of food security,” she said.

Concern staff in Kenya are assessing the damage and planning to support families through cash aid and seed distribution to try and avert a food crisis.

Similar locust swarms in Ethiopia are the worst the country has seen in 25 years, with an estimated 235,000 hectares of crop, pasture and forest invaded by the infestation so far.

Meanwhile in Somalia, rural communities already struggling to cope following unusually heavy rains and flash floods in the second half of 2019 are especially vulnerable now to the effect of the massive locust swarms. In several locations, precious crops have been destroyed and Concern’s team in Somalia are conducting an assessment of the damage and the needs of the people affected.

The UN’s Food and Agriculture Organisation (FAO) has estimated that the locust swarms will grow up to 500 times their current size by June if sufficient measures to tackle them are not taken soon. We need your continued support now to prevent this emerging disaster from becoming a catastrophe in the coming months. Thank you. 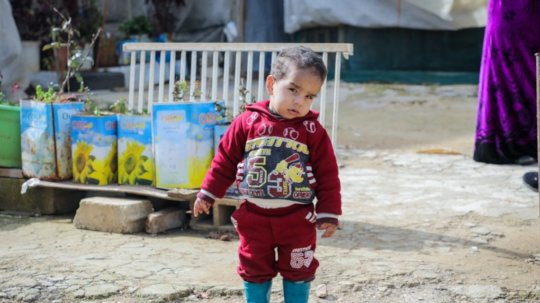 Below you will find an update from Lebanon written by Concern's Tony Cuddihy. Read on to learn the story of just one of the 55,000 Syrian refugees in Lebanon supported with shelter assistance by Concern in 2019. All thanks to generous supporters like you. Thank you.

With 1.5 million people having fled Syria for neighboring Lebanon in the largest refugee crisis since World War II, your support has been crucial in helping some of the world’s most vulnerable people.

The nine-year Syrian crisis has taken a huge toll on families who have fled from their home country to Lebanon in search of safety. Those arriving in Lebanon have lost everything; their homes, their possessions and often, tragically, their loved ones. Thousands of people are now living in makeshift shelters, having difficulty accessing clean and safe drinking water, and struggling on a daily basis as they try to create a better life for themselves and for their children.

Thankfully, our supporters are helping us to make a difference as we endeavor to provide safety and security to those who need it the most. Your help means that these families can start to recover from the trauma of living in fear of their lives and restore their sense of dignity and confidence.

For 30-year-old Rana, life changed dramatically once she and her family were left with no choice but to leave their home in Syria. Rana and her husband Ibrahim had enjoyed a happy, quiet life at home before conflict broke out. When violence reached their town, the family was left with no choice but to leave with nothing but the clothes on their backs and cross the border into Lebanon.

“We brought nothing when we fled from Syria, just my children and the clothes that I was wearing,” she tells Concern. “We used all of our savings and we were left with nothing. We paid everything we had to get here.”

Left with nothing on their arrival in Lebanon, the family had no choice but to set up home in a flimsy tent with no protection from the cold. Lebanon’s punishing winters mean that a bitter chill runs through the shelter.

“When the winds come, we cannot sleep at all and when the rains came, the water came across the room. We put the children on the pile of mattresses to keep them safe from the water and my husband had to go outside to try to make a drain to stop the water from coming into the tent. We also put stones on the roof to try to keep the tarps from blowing off in the winds. We get very afraid that the whole roof will collapse on our head.”

This was no way for a family to live but, with your help, Concern has been able to provide life-saving essentials to Rana and her loved ones. We will continue to check in on the family to make sure they receive the support they need.

“Concern have given us tarpaulins, mattresses, blankets and diapers. The team regularly visit us and see what we need,” Rana explains. Giving Rana the means to look after her children has empowered her and enabled her to live with dignity.

From Tragedy to Recovery: A Refugee Story from Bangladesh 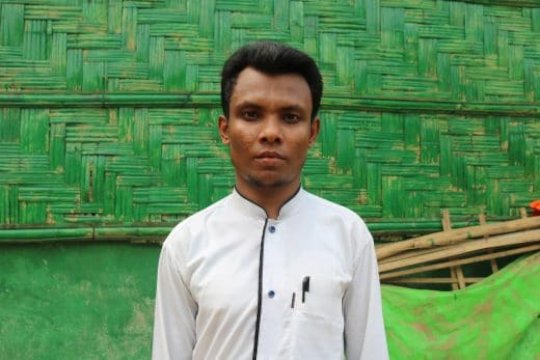 For this months's update, I'd like to share with you a story about a Rohingya refugee, one of the tens of thousands supported by Concern in Cox's Bazar, Bangladesh. But this refugee is special because he went from being a recipient of humanitarian assistance to a full-fledged humanitarian himself.

The story below was written by Concern's Clare Ahern and is evidence of the incredible impact your support has, but also of how Concern's staff of nearly 4,000 humanitarians worldwide all have their own inspiring stories.

At home in Myanmar’s Rakhine State, Amir* never imagined he would one day become a refugee. In mid-2017, his wife had just given birth to their first child, a little baby boy. Life was relatively good and they were discovering the joy of parenthood. However, that joy was to be short-lived. In August of that year, as part of a major escalation of racial tensions, their village was attacked and they were forced to flee.

Amir’s mother, wife, and son managed to make it to a boat making towards Bangladesh. He and his father became separated and were taken captive, but managed to escape separately. Amir was badly injured. “They stabbed me in my back and my leg to ensure I could not leave.”

Amir and a group of his fellow captives eventually found a way to escape from where they were being detained. Heroically, they risked their lives to rescue others before they fled. “We knew that they were not going to spare a single female, no matter what age she was,” he says. “So we tried to get the females out first. No matter if it cost our lives.”

Tragically, Amir would learn that the boat carrying the rest of his family capsized. In agonizing pain from his stab wounds and close to unconsciousness, he searched for two days but never found them.

In October 2017 Amir reached at Balukhali refugee camp in Cox’s Bazar, Bangladesh and was admitted to a hospital to be treated for his wounds. Slowly he began to rebuild his life. He now works as a volunteer in one of Concern’s nutrition centers, which provide recovery support for young children who are severely malnourished.

Visiting households, he screens children and refers those who show symptoms to the nutrition centers.

He says, “I never imagined I could stand back up — I was traumatized from the death of my family. I feel much better now. I like working with the children.”

Amir has since re-married and he and his wife now have a young baby boy. Together, they live alongside his grandmother, father, and younger sister and he finds joy both in his work and spending time with his family. “I lost my own child and then gained another, but I also watch over so many in the camp.”

*Name has been changed for security reasons.