Clean Water for Families in Syria 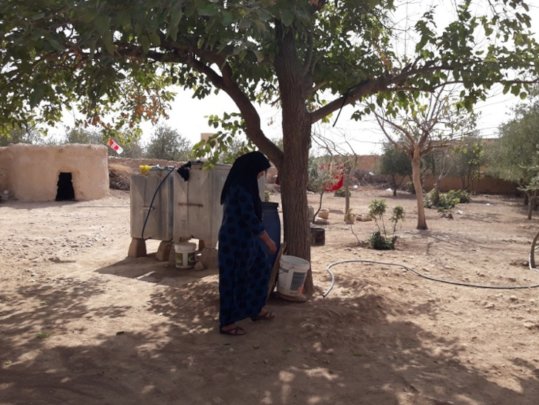 Thanks in part to your generous contributions, Concern Worldwide continues to work with Syrian refugees and internally displaced persons (IDPs) in Syria, Lebanon and Turkey, providing basic needs such as clean water, food, clothing and shelter. We also provide education, psycho-social support, and community based protection efforts. Today, I would like to take the opportunity to highlight the situation inside Syria, along with Concern's response.

Over 13.5 million Syrians inside Syria are in dire need of humanitarian assistance, and 4.6 million people in need are trapped in besieged and difficult to reach areas. Inside Syria, Concern has provided access to clean water for 130,000 people through the rehabilitation of existing water supply networks. We have also provided tens of thousands of people with hygiene kits containing soap, toothbrushes and toothpaste, nail clippers, hair combs, and personal hygiene items as well as diapers for small children.

Concern’s efforts have made a big difference in the life of Maya*, who is a 30 year old widow and mother of one from northern Syria who has been living with her step-parents since the outbreak of the Syrian war in 2011. Her husband was tragically killed in a mine explosion in 2017 and the household is now solely reliant on his monthly pension of 25,000 SYP ($48), along with food vouchers provided by Concern.

Until this year, Maya’s family was like many others in Syria; they lived in a partially destroyed house that lacked basic running water for drinking and washing. This meant that they were forced to spend what little money they had on unsafe water from wells in neighboring villages. This lack of water further impacted the family’s crops as, without water, their trees became withered and produced barely any fruit.

However, in February 2017, Maya and her local community came together and approached Concern to repair the town’s water station. Subsequently, Concern successfully repaired the water station which now provides 80,000 liters of safe, clean water to 1,750 individuals.

“The water from the station has renewed our life again. I feel comfortable when we are using the water network now, because I know the water is safe for my child to drink.”

Thanks in part to your contributions, Maya’s family and the local community no longer have to purchase unsafe water from neighboring villages, which drastically reduces the risk of waterborne disease and also means that they have more money to spend on essential items. Additionally, access to regular water has rehabilitated the family’s trees, allowing them to harvest fruit again and creating a sustainable source of food. 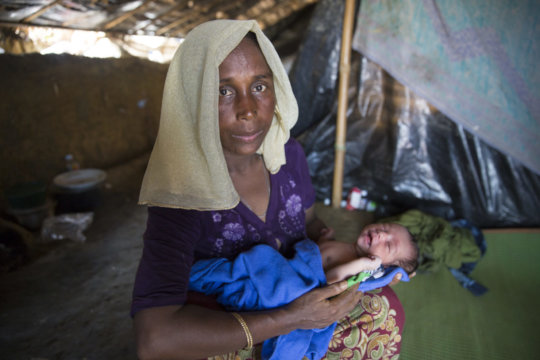 Shaju with her day-old daughter, Noor

Thanks to your generous contributions, Concern Worldwide continues to provide assistance to vulnerable Rohingya refugees in Bangladesh.

An estimated 582,000 Rohingya have fled Rhakine state in Myanmar and crossed the border to Bangladesh since the latest outbreak of violence at the end of August. This brings the total number of Rohingya refugees in Bangladesh to an estimated 882,000. Concern has been working in Bangladesh since 1972 and we have swiftly ramped up our response to meet the needs of recent Rohingya arrivals. We’re targeting four camps in the Bay of Bengal, and focusing initially on providing food and emergency nutrition to children and pregnant or breastfeeding women.

I want to now take the time to share with you a few stories about the beneficiaries whom your donations are helping:

Thirty year old Shaju gave birth to her eight child, Noor, just after she arrived in Cox’s Bazar. Violence forced Shaju and her husband to flee their village, despite the fact that she was heavily pregnant. “My brother in law was ahead of us when they caught him.” She says. “He was brutally killed- we found his body.”

It took them three days to reach the Hakim Para settlement where her family now stays. Open defecation is common here, malnutrition levels are high, and the water and sanitation facilities are under pressure. But Shaju says there is nothing to go back home to. “Everything has been burned.” She explains.

Despite the hardship she’s facing, Shaju is grateful her family found safety. “Now I am at peace,” she says. “There was killing and fighting over there- here we have peace.”

Rama and her husband, Abu Sayed, reached Cox’s Bazar with their son Habiron after making a nearly 30-mile journey to Bangladesh on foot.

The family ran for their lives after witnessing intense violence in their home village in Myanmar.

“They were shooting at us and dropping bombs from a helicopter,” says Rama. “People were beheaded.” Her mother suffered a bullet wound in her arm. As they fled, they saw their village burning behind them.

Though Rama and her family arrived safely in Bangladesh, they have nothing but the clothes they are wearing, a few phones, and a small amount of cash. A local landowner agreed to let them use a small patch of land and helped them build a crude shelter from bamboo and black plastic. Inside, the temperature reaches well over one hundred degrees.

Rama says the Bangladeshis have been very generous, and she has received gifts of clothes, cash, and food. But the family is struggling and Rama is forced to beg for money on the side of the road.

Food is also extremely limited. “At home we would eat three meals a day — here, we have a very small amount twice a day.”

Despite all they’ve experienced, Rama and Abu Sayed hope they can one day return home — “as long as we can be left in peace.”

Concern plans to continue to scale up our response in Bangladesh in order to reach as many beneficiaries as possible for as long as the refugee crisis continues. On behalf of Concern and the people we serve, we thank you for your generous support, which helps to allow people like Shaju and Rama to sleep at night without fear. 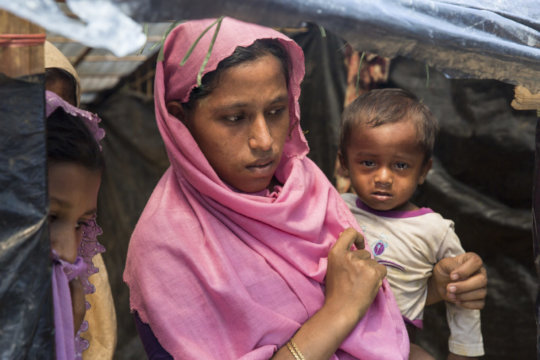 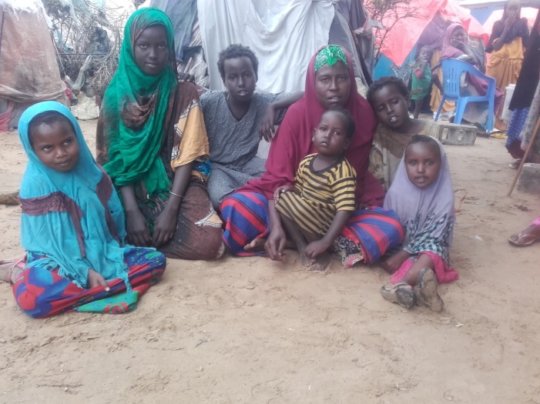 Uba and her children at the IDP camp.

Concern Worldwide continues to respond to the hunger crisis in Somalia, South Sudan, Ethiopia, and Kenya. Thanks to your generous support, our 1,200 staff members on the ground throughout these four countries continue to provide emergency nutrition programming, safe drinking water and latrines, emergency cash transfers, and other life-saving interventions. Today, I want to spotlight Concern’s work in Somalia.

Somalia has been suffering from an ongoing drought, due most recently to poor consecutive rainy seasons. The lower than expected rainfall of the “Deyr” rainy season in October through December 2016, followed by the shorter than expected “Gu” rainy season in 2017, leading to a serious drought, which has resulted in crop failure and loss of livestock, causing a spike in food insecurity and malnutrition. The situation has caused many to leave their homes in search of food and water, and most of these people eventually end up in internally displaced persons (IDP) camps, outside of Mogadishu. People arrive at these camps with only what they can carry, and are acutely in need of assistance.

An important line of assistance for IDPs is unconditional cash transfers (UCT), which are an effective intervention during droughts when markets are still functioning, as they allow people to purchase life-saving food, water, and non-food items for themselves. This gives them choice and dignity while also supporting local livelihoods and markets by providing cash inputs into the local economy.

This system is especially beneficial because it protects staff and beneficiaries in Somalia’s highly insecure environment, as no actual cash exchanges hands. Concern and partner staff work closely with the community and IDP camp leaders to identify the families most in need of cash support and subsequently select households based on a number of key vulnerabilities. The cash transfers take place using mobile money systems, with families registered through their phone numbers.

I want to now take the time to share the story of one of our beneficiaries, Uba.

Uba was living with her elderly husband and six children in Furuqlay in the Lower Shebelle region of Somalia when encroaching violence and fighting forced her family to leave. In Furuqlay, Uba’s family had a farm and livestock, but they left everything when they fled. They ended up in a camp for internally displaced persons in Mogadishu.

“It is not something that I imagined having to one day think about, running and staying with my children in a place that doesn’t belong to us.” Says Uba.

To make matters worse, Uba’s ninety-year-old husband became sick in the camps. Uba was able to borrow money from a neighbor in order to take him to the hospital, but even after he recovered, he was malnourished. Uba could not afford to feed her family more than one meal a day, if that.

When asked about her life since receiving the support, Uba says, “My life is much better than the life my family and I had in Furuqlay. If I compare both, today I’m eating at least two times a day while before there was only a 50% chance to get something to eat once a day. Now I am comfortable and enjoying a less stressful life that Concern Worldwide has enabled inside the camp.”

The cash transfers are not only enabling Uba and her family to eat more full meals every day. With the leftover cash, Uba has also started a small business selling fruits and vegetables. She is currently selling the produce outside of her shelter because she does not yet have enough money to buy a table, but she is hopeful that in the coming months her business will grow.

Uba says that her greatest pleasure is being able to feed her children every day, and thanks to your support, Uba and her family can look towards a brighter and more stable future. 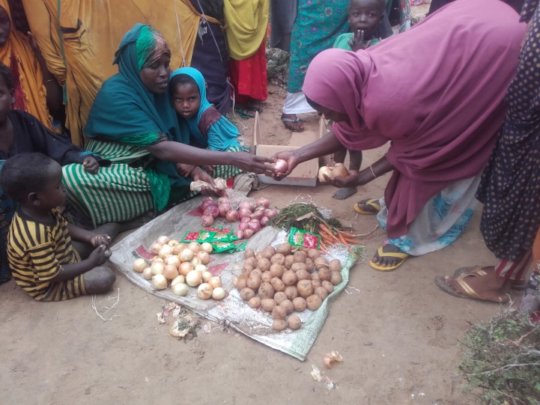 Uba and her children sell vegetables.
‹ 1 ... 8 9 10 11 12 13 14 15 ... 21 ›
WARNING: Javascript is currently disabled or is not available in your browser. GlobalGiving makes extensive use of Javascript and will not function properly with Javascript disabled. Please enable Javascript and refresh this page.