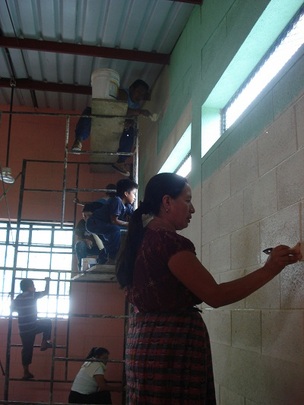 The past week the library has been receiving a make-over with a fresh coat of paint. The school community got involved and lent their help to make this transformation a possibility. Teachers, students, and even the principal rolled up their sleeves and grabbed a paintbrush. After a morning of setup, during which the teachers assembled scaffolding and mixed paint, the work was ready to begin. The teachers and students climbed on scaffolding to reach the highest sections of the walls and by the end of the first day three of the walls were completed. Groups of teachers and students returned two additional days to complete the painting. The space has already begun to brighten up thanks to the new colorful walls. A transformation has truly begun in the library and we all cannot wait to see the finished product! 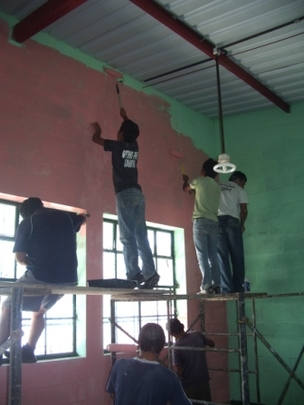 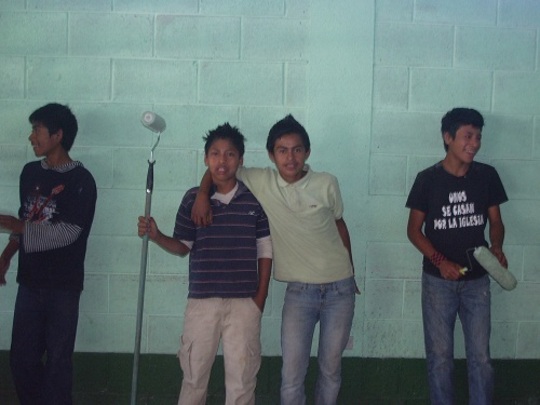 A Postcard from Pueblo a Pueblo in Guatemala 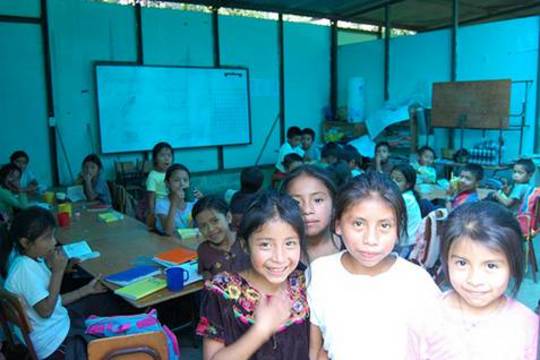 In February, six GlobalGiving donors traveled to Guatemala for a week of exploration, cultural submersion, and welcomed visits to four GlobalGiving projects.

One of these projects was Pueblo a Pueblo where they are building a library/reading room at a school damaged by Hurricane Stan and induced landslides. Here’s one account of the group’s visit:

“Over to Lake Atitlan which is stunning if not infected with cyanobacteria and used as a dump for pretty much everything dumpable. Pueblo a Pueblo is a smaller operation focused on helping indigenous families whose village was destroyed in the mudslides of 2005. They're building a library for the school and just started a large organic garden to supplement the healthy lunch program where a different town mother cooks lunch for all of the school children each day.

One of the largest problems in Guatemala is the malnutrition. Ironically farmers whose livelihood is growing fruit and vegetables are better off selling it since it brings in more money, so they subsist off of very little food and not nearly so nutritious - primarily corn. They also have two sponsorship programs both of which are 300$/year - one to support one child throughout the school year to provide them with supplies and to support their classroom and teachers. The other is a maternal program for pre and post natal care and nutrition through the first 5 years of the child's life. 10% of children in Guatemala die before the age of 5. TEN percent. That's nearly incomprehensible.”

If you want to visit Pueblo a Pueblo’s project page click here: www.globalgiving.org/3666

And just if you’re curious about the rest of the trip and where they were headed after Pueblo a Pueblo: 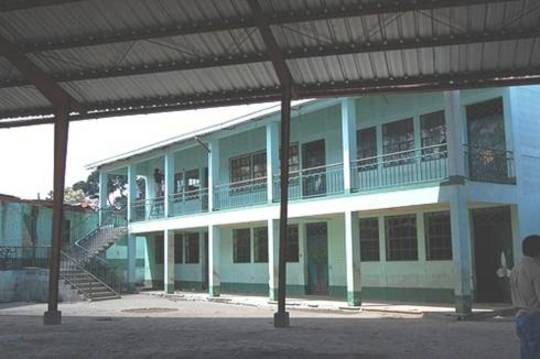 In this poor region of Santiago Atitlán, Guatemala, where even books are of great value to thieves, a local blacksmith recently installed metal bars to the windows and doors of the school library, making the Panabaj School Library safe for the library’s belongings and its visitors. The next step in the renovation of the school library was the set up of electricity. Panabaj Elementary was fortunate to have one of its own teachers volunteer his previous electrical engineering experience in assisting in the electrical wiring of the library. Very soon, they library will be ready for painting and furnishing; allowing for a pleasant and safe place for its students to study and read. The School Library Coordinator Johanny Queiju (pictured on the right with President of Pueblo a Pueblo Kristen Van Zandt) is currently overseeing the school library project. She works closely with a committee of students, parents, and teachers of the Panabaj Elementary School to ensure that the community is actively engaged in the planning process of their school library. Recently, the Board of Directors made a visit to the site to observe its progress and was encouraged by the enthusiastic number of volunteers and staff who have not only been working hard on the project but also promoting Pueblo a Pueblo’s mission statement and vision for the future of the Guatemalan community.

Attachments:
‹ 1 ... 69 70 71 72 73 74 75 76 77 ›
WARNING: Javascript is currently disabled or is not available in your browser. GlobalGiving makes extensive use of Javascript and will not function properly with Javascript disabled. Please enable Javascript and refresh this page.