By Pueblo a Pueblo - Water, Sanitation and Hygiene (WASH) 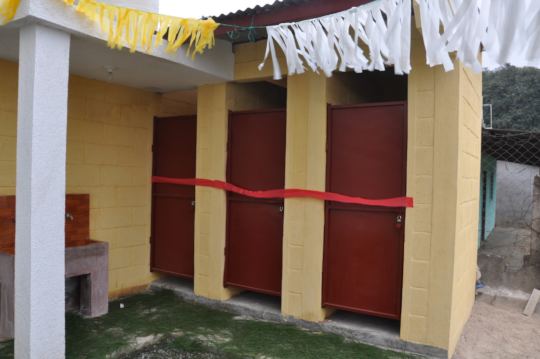 The new stalls decorated for the inauguration

Tomás Pacay Mendoza is the coordinator of Pueblo a Pueblo’s Water, Sanitation, and Hygiene  (WASH) in Schools project. For months, Tomás and his team have been coordinating efforts between administrators at Agua Escondida Primary School, local community groups, international funders, and a construction team to build a new bathroom facility for students. On May 14, after months of planning and weeks of execution, Tomás and members of the Pueblo a Pueblo team traveled to Agua Escondida to celebrate the inauguration of the school’s new bathroom facility!

The school is attended by almost 600 students from Kindergarten through high school. For years, there have only been five working toilets in the whole school for students to use. But during recent construction, contractors tore down a bank of two unused toilets and built a new bank of stalls in their place. The girls' side of the new facility has three new toilets and a handwashing station, and the boys' side has two new toilets, a urinal, and a new handwashing station. These new facilities will double the number of working toilets at the school, creating a safer and healthier learning environment for the students of Agua Escondida—certainly a reason to celebrate!

The inauguration ceremony began in the school’s large multipurpose room. The walls were covered with posters made by students, each which depicted a different way in which students can take care of their earth and their school. Several were variations on the theme “How We Can Take Care of the New Bathrooms” and encouraged students to place trash in the trash can, sweep the stalls each day, and remember to flush!

During the ceremony, school administrators honored Tomás and Pueblo a Pueblo Administrative Director Ana Cabrera. After brief remarks from a variety of school and community leaders, the audience was treated to two different performances related to the themes of the day: environmentalism and hygiene. First, a third grade class performed a short musical parable called “The Earth has a Fever” about a planet and the humans that nearly destroy it—and then save it! Then, a group of sixth graders performed a play about the danger of pollution to our health—and the importance of keeping our homes, businesses, and streets clean.

Afterwards, the ceremony moved outside to the new bathrooms, decorated for the occasion by members of a local community group. The school’s principal invited Ana to cut the ribbon on the five new stalls and two new handwashing stations now available for students to use! Once he had unlocked the bathroom stalls, the principal encouraged the students gathered around to take a look inside.

Building these five new bathroom stalls is only the first phase of Pueblo a Pueblo’s collaboration with Agua Escondida. Next, our team will help to coordinate the demolition and reconstruction of a second bank of bathroom stalls in the school’s lower level, where Agua Escondida's youngest learners attend class. Thanks to donors like you, we were able to complete Phase One—now we need your help to carry out Phase Two! Your support fuels our success—thank you for believing in the power of proper sanitation to keep kids happy, healthy, and learning every day. 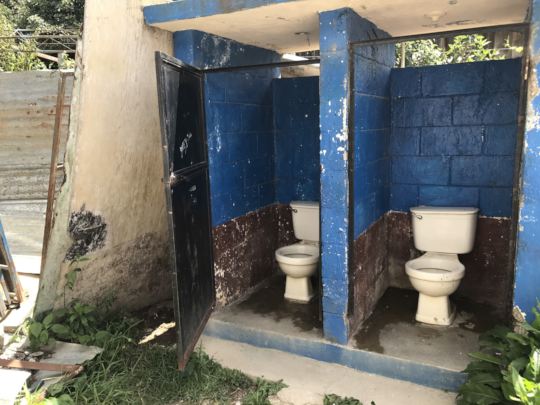 Before the new construction 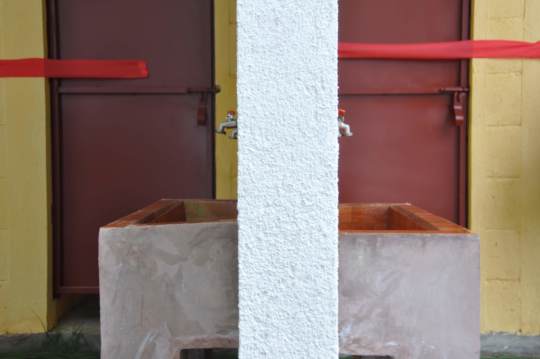 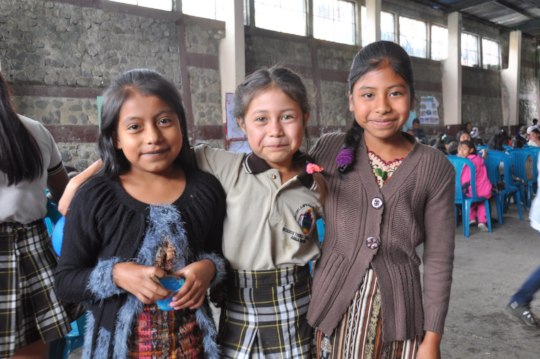 Students gather for the inauguration ceremony 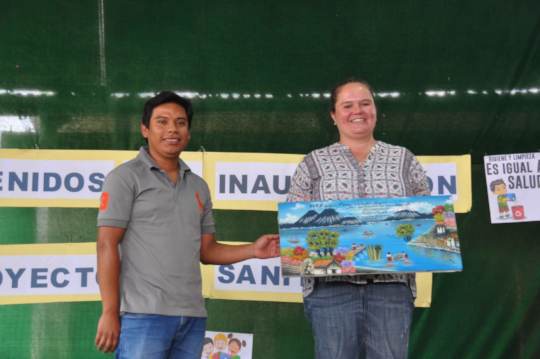 Tomas and Ana receive a gift from school leaders 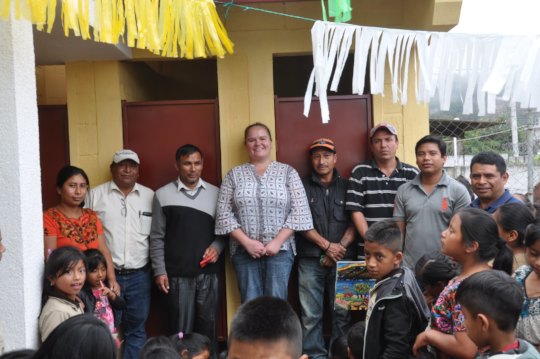 School and community partners at the new stalls 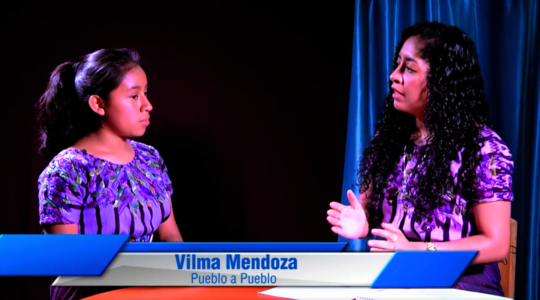 Vilma and Rebeca are the team behind Women’s Health Champions, Pueblo a Pueblo’s newest initiative to promote sexual and reproductive health education among women in and around Santiago Atitlán, Guatemala. In anticipation of the project’s launch, they have been working with local organizations and government institutions to spread the word about the project and build relationships with potential partners.

They just wrapped up a successful collaboration with the Municipality of Santiago Atitlán, the seat of local government here in Pueblo a Pueblo’s host community. The Women’s Health Champions team members were invited to participate in an episode of “Hablemos de...” (“Let’s Talk About...”), a local television series dedicated to raising awareness of public health issues. Vilma and Rebeca were featured on an episode called “Hablemos de la Salud Sexual” (“Let’s Talk About Sexual Health”). Since this program is made by and for members of the Santiago Atitlán community, "Hablemos de..." is almost entirely in Tz'utujil, the local Mayan dialect and most residents' first language.

Rebeca kicked off the segment by introducing the topic of sexual health and the day’s special focus: puberty. Vilma then spoke about the four types of changes we go through during puberty. Puberty involves physical changes, she explained, changes to our bodies inside and out that transform us from children into adolescents. But it also brings psychological changes, like the intensification of emotions and a tendency toward anger and frustration; emotional changes, like romantic and sexual attraction to others; and social changes, like the desire to relate to the world as a young adult rather than a child.

Puberty prepares the female body to carry children, Vilma explained, but although a teenage girl’s body is ready on the inside, she still isn’t physically or mentally ready to be a mother right away. Once a girl has begun to menstruate, she can get pregnant, but her body still has growing to do—her hips need to grow wider and her body bigger and taller—before she can give birth safely. She also needs to be psychologically mature in order to handle the emotional challenges of parenthood, Vilma noted.

Vilma then spoke directly to her teenage audience. No one else has a right to your body, she said. Although your body has changed, you have the right to say no if someone wants to touch your body or asks you to do things you don’t want to do. This is an important message to promote among young people, she told the Pueblo a Pueblo communications team, because educating teens (both boys and girls) about consent can help prevent future abuse and assault.

In addition to their work on the segment, the team recorded an advertisement for the reusable cloth menstrual pads that will play a key role in Women’s Health Champions.  Vilma used this additional airtime to introduce viewers to the cloth pads’ health and environmental benefits. The product helps women practice good menstrual hygiene at the same time that it reduces the amount of waste created by disposable pads, she explained. Not only has Vilma’s advertisement been played on local television stations and shared on social media, but it can even be heard in the streets! From time to time, the municipality drives an ad-mobile around town playing Vilma’s message for all to hear.

So why reusable pads? At Pueblo a Pueblo, we believe that economic empowerment is a key step toward improving health outcomes among women. That’s why Pueblo a Pueblo is helping to incubate the social enterprise that supplies the pads: a small business made up entirely of local indigenous women from Santiago Atitlán! The economic benefits of this product will spread even further when peer educators, or “Champions”, distribute the pads to women in their communities, producing additional income for the Champions’ households and promoting good menstrual hygiene in their neighborhoods.

Vilma and Rebeca are determined to bring sexual and reproductive health and rights (SRHR) education to the women of Santiago Atitlán—and they need your help! Your donation promotes women’s health advocacy and economic empowerment here in rural Guatemala—consider a gift to Women’s Health Champions today. 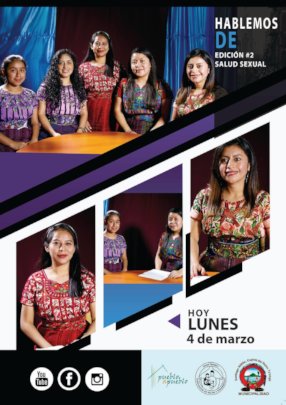 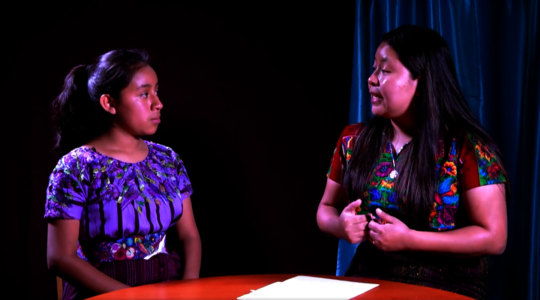 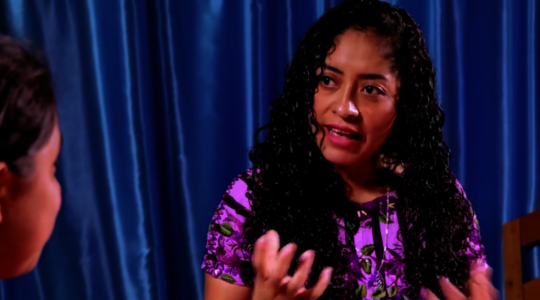 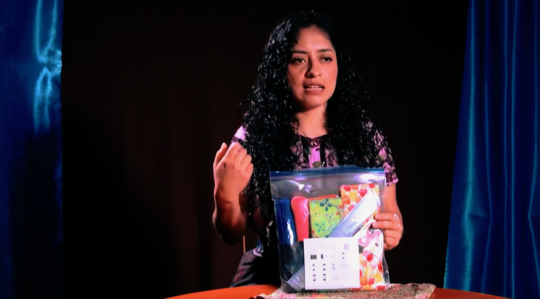 Girls Will Build the Future 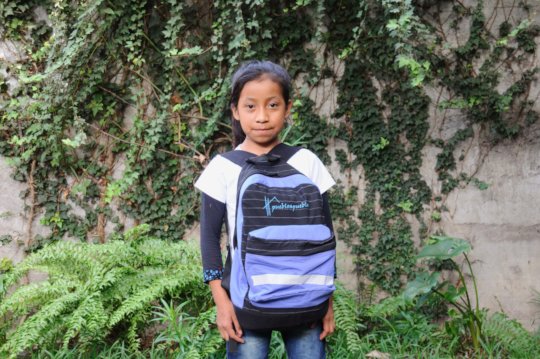 Elena with her school backpack

The students who are sponsored through the Primary Education Scholarships project overcome countless obstacles to getting an education every day. We believe that education empowers young people to build positive change in their communities—that’s why our team works hard to support passionate young learners with the resources they need to attend school and succeed. Elena and Dorcas are two students sponsored through the project whose education is made possible by donors like you. Below are the messages of hope, ambition, and gratitude that they would like to share with you, our extended Pueblo a Pueblo community.

Elena is a fourth grader at Panabaj Primary School. She writes about her neighborhood, “In Panabaj we are always happy.” To the donors who support her, she writes,

My goal is to be a teacher and give a good education to the children in my community and to give a good example of success for them. It makes me so happy to talk about my dreams and goals. With nothing more to say, I say goodbye.

Dorcas is a fourth grader at Chacayá Primary School. She has a cat named Mateo and a dog named Monkey. To the donors who support her education, she writes,

I am in the fourth grade thanks to my parents because they have supported me and they look after me and my siblings so that we can reach our future goals and take advantage of our schooling. I’m also grateful that there is a little school in my community, because without that school my family would have to pay a lot more for me to study somewhere else.

If God wills it, in sixth grade I will have the power to study how to prevent violence in our community so that it does not go any further. In the event it happens, my parents will be very grateful. With the support you have given me, my father says that one day I can be the professional of my family because not only boys are able to study and we have the same rights.

Your support fuels Dorcas and Elena’s success. Thank you for believing in young students like them and in the power of education! 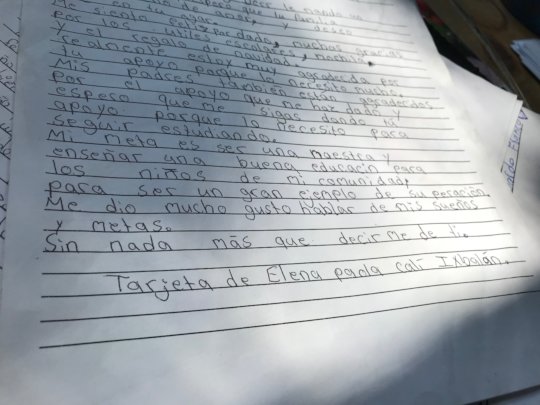 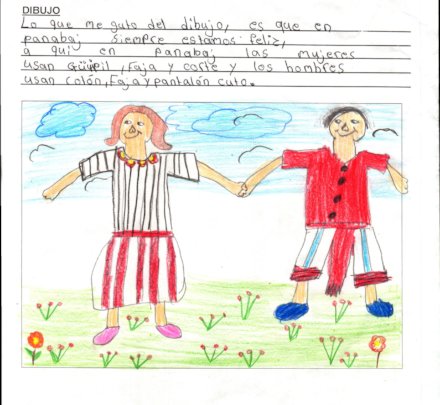 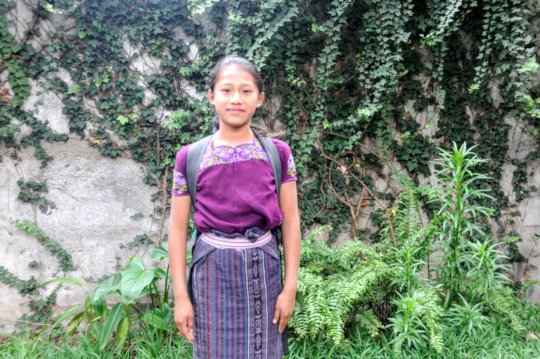 Fourth-grader Dorcas with her school backpack 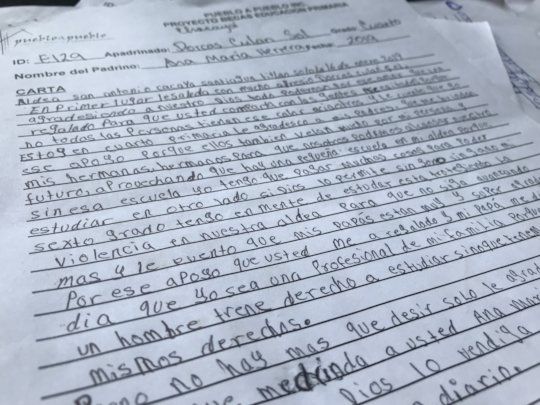 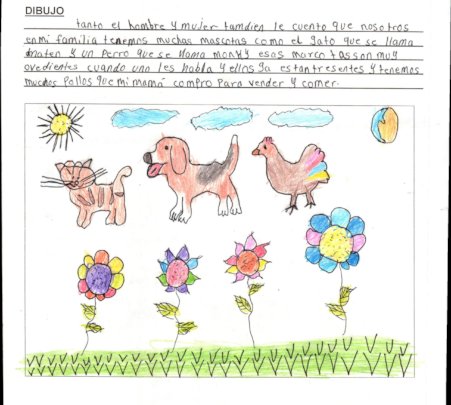 ‹ 1 ... 5 6 7 8 9 10 11 12 ... 77 ›
WARNING: Javascript is currently disabled or is not available in your browser. GlobalGiving makes extensive use of Javascript and will not function properly with Javascript disabled. Please enable Javascript and refresh this page.