By Sarah Kennedy and Rick Goodlander - Baark Director and Volunteer 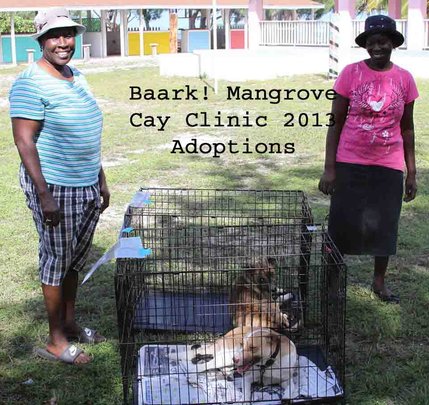 2013 was a fantastic year for Baark! as we exceeded our goal and ended with a count of 1,061 spay and neuters. Thank you for all of your donations last year, your contributions really did make a tangible different and saved literally THOUSANDS of puppies and kittens being born into a life of suffering.

We kicked off our 2014 program with a return visit to Mangrove Cay, Andros.   As you'll read a MASH (mobile animal surgical hospitals) clinic is not always straight forward, changes are often made last minute and the teams need to work together and adapt.  Everyone joins to work for one goal, we all start and finish together at the same times, no man (or animal) is left behind.  They are especially important on our 'family islands' of the Bahamas who dont have regular access to a veterinarian.

Resident of the area and Baark! volunteer Rick Goolander gives us an insight into the clinic.

Convinced that volume would be much less for a maintenance clinic given the success of Baark!'s first clinic in Mangrove Cay (101 procedures), Baark! planned accordingly. After two postponments due to high sea state preventing the transport of the Baark! truck and necessary accompanied gear Baark! were not to be dissuaded nor discouraged and the team set another date. At seemingly the last minute, it was discovered that there was a scheduling conflict with the intended clinic location. Island residents in support of Baark!'s efforts scrambled for an alternative location and found that the Mangrove Cay Homecoming site could be an acceptable alternative and things were set to go.

The Team arrived in Mangrove Cay (Andros based on 09 Jan 14) and (Nassau based on 10 Jan 14). However, the truck and gear had yet to arrive.......Weather of course. In the mean time, the clinic location was prepared for the upcoming days and was opened late afternoon, 10 Jan 2014. The following two days were full on non-stop furthering of Baark!'s educational out-reach, trapping of strays at the community dump, collections from residences without transportation and of course walk-ins. Of those walk-ins, we were quite pleased to see the smiling familiar faces of members of the Mangrove Cay Community, walking in with their very healthy Potcake yearlings who had been adopted at the Baark! 2013 Mangrove Cay Clinic.

In less than 15 working hours of the clinic being fully operational, 50 procedures were performed and 10 (some semi-feral when we first collected them) puppies found new and loving homes through adoption. Administrator Knowles himself (and his daughter) adopted two. The Baark! Team on the ground performed miraculously under adverse conditions and circumstances, especially considering that they were working with two less personnel than expected.

The People of Mangrove Cay, Andros absolutely embrace the Baark! influence and impact to their communities. The proliferation of feral/stray and unwanted Potcakes in Mangrove Cay has definitively been reduced as a result. 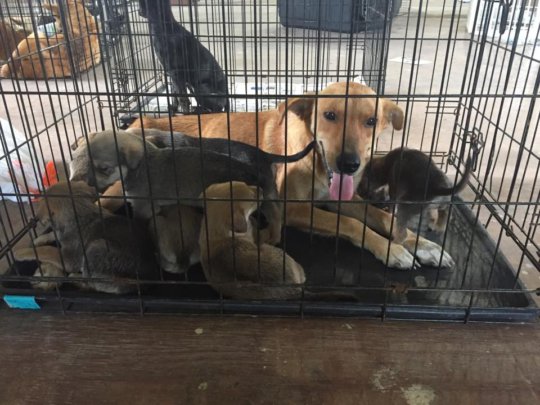 Dog labeled and ready to go ! 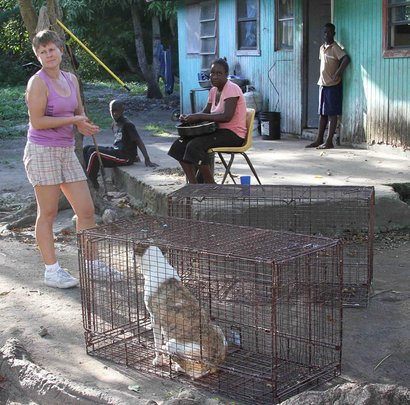 No more puppies for this Momma dog 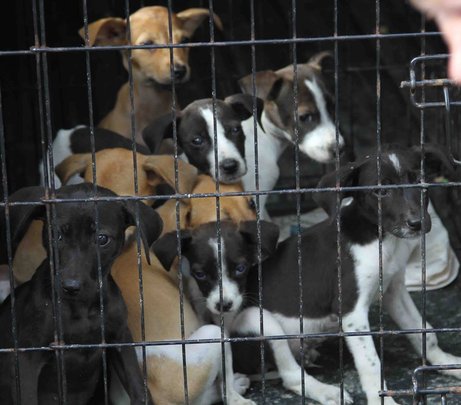 Puppies ready to be fixed 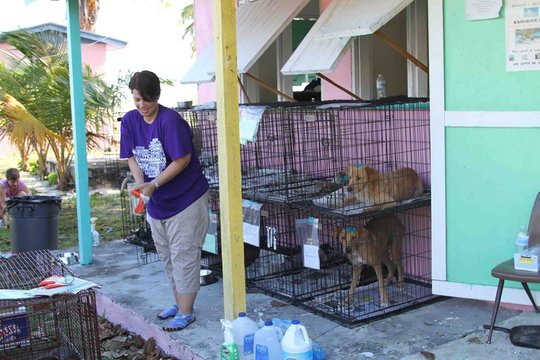 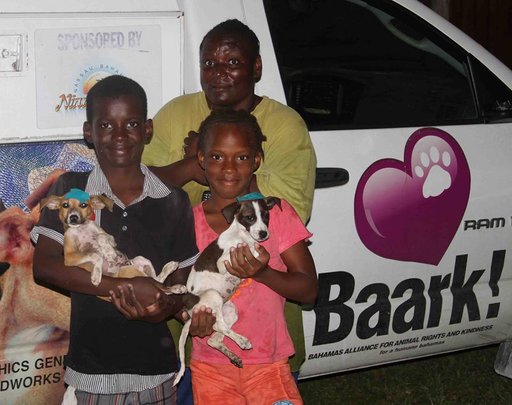 2 lucky pups from the clinic getting a new home 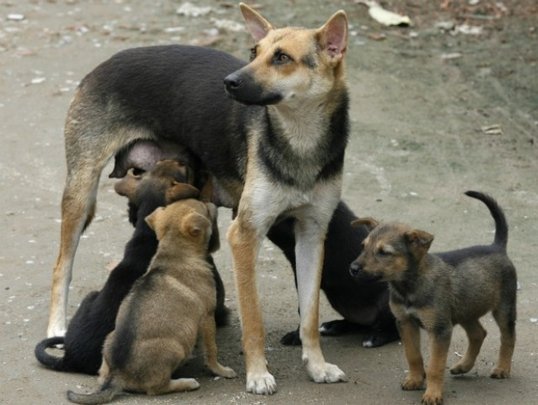 Thank you for the quick surgery

At the end of October 2013 Baark! had completed 784 (either free or subsidized) spay and neuters in the Bahamas. This is a combination of owner calls in, 'stray busting' pickups and our MASH clinics in the family islands, most recently in Marsh Harbour Abaco where 151 spay/neuters were done in just one weekend.

Our goal for this year is to complete a massive 1,000 spay and neuters, we are close to our goal and with your continued help are very confident we can achieve this.

We know that spay/neuter is the only (and most humane) way to effectively reduce the animal overpopulation in a community. Each sterilization Baark! completes literally saves thousands of unwanted puppies and kittens from being born into a life of suffering.  With each surgery we also give each animal a vaccination and worming medicine.

A Special Thank you Message

Firstly a big thank you to ALL of you who have donated to our projects.  No amount is too small! We wanted to share this special thank you message from the point of view of one 'patients' hoping to give you a glimpse into how life changing a simple spay or neuter can be.

Thank you for deciding to help us,

Six months ago I had been struggling to feed myself and my five puppies for quite some time before you caught us. I was tired, sick and hungry. My puppies were filthy and always in danger. When we were found by you, all of that changed. You reassured us that we would be taken care of and you were right.

I have had four litters of puppies and all of my years of being a mother I have never been able to provide my puppies with safety, we lived on the street and wandered the neighborhood for food and drink. I have seen five of my puppies pass away from various diseases and two of them die from the horrible traffic we live near. I know now my last five puppies have a home that is safe. As a mother I want to thank you from the bottom of my heart.

I also want to thank you for the quick surgery you did for me. I understand that this surgery will save me from having any other litters. I have loved all my puppies but the toll it has taken on my body is enormous and I could not fathom having another litter without serious consequences on my health and that of my puppies. Thank you for taking the time to support Baark! and the wonderful work they are doing, I owe my new chance at life to your kindness . Thank you ever so much 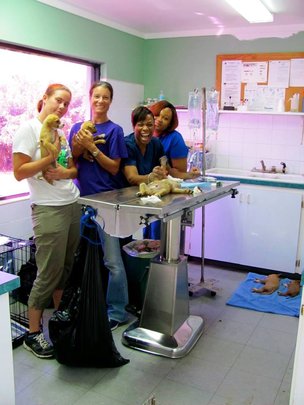 Vets and volunteers at the Abaco clinic 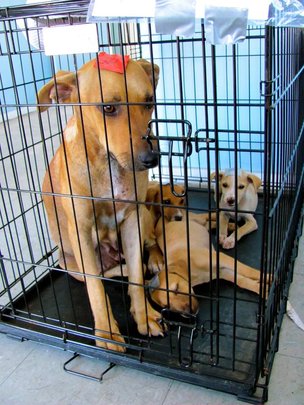 Mom and Pups ready to be spayed 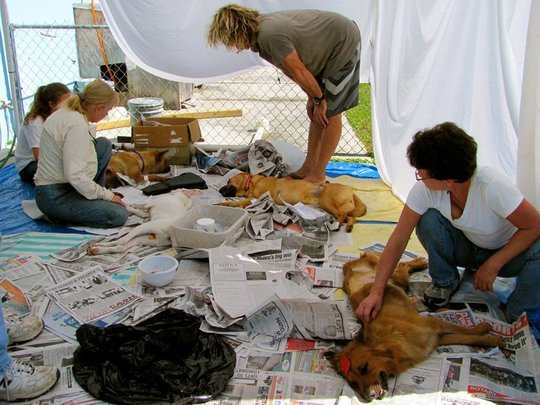 In the recovery area 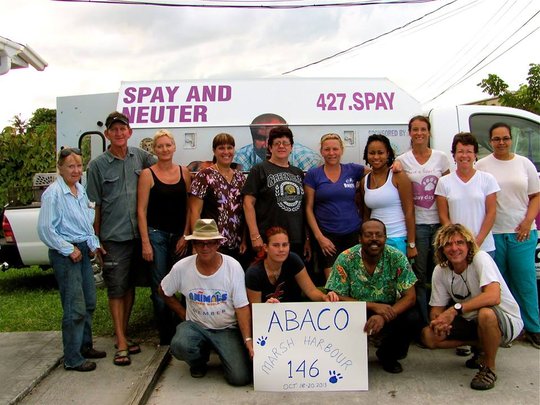 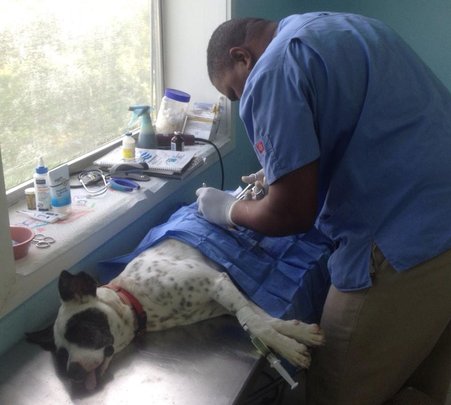 Sparkles being spayed by Dr. Dorsett in Andros

In Nassau and the Family Islands in The Bahamas adequate animal care and guardianship is limited.  Driving around the islands there are stray and roaming dogs.  As a result dogs are hit by cars, suffer from diseases, human neglect and abuse, and untimely euthanasia at the Government Pound.  People also poison dogs with rat poison, coolant and other toxic chemicals.  We also have a large number of feral cat colonies.

Spay & Neuter programs are the only humane way to reduce the number of unwanted animals and therefore the suffering they are subjected to in The Bahamas.  Baark! strongly believes that due to our manageable land mass it is realistic to believe we can end the suffering of cats and dogs in The Bahamas and we are working tirelessly to accomplish this!

With the current economic climate, unfortunately animals do not rank very high on people’s list of priorities.  It is so important for us to be able to assist.  There are times when people get very overwelmed with a litter of puppies or kittens and surrender the mother along with her babies to the shelter.  If they are not surrendered they are typically left uncared for, without vaccinations and subject to a life of suffering.  It is crucial that we are able to step in and spay and neuter as many dogs and cats as we can in order to prevent this heart wrenching cycle.

Baark! offers a hotline - our number is 427-SPAY.  We have an awesome volunteer that answers the calls and fields them as needed.  Some people that call do have transportation so we set them up to go into a vet located near to them.  We ask them to make a donation of any amount that they can afford and then we pay the balance of the bill with the local vet.  Other people call who do not have a way to transport their pet to the vet, so we log their call on a spreadsheet and systematically respond to them by grouping them in areas and then targeting an area.

Baark! has coined a word called ‘straybusting’.  This is when volunteers have a day or two available and go out in the truck and target an area, following up on calls that have been made to our hotline.

Our local vets are very supportive and the local private vet practices participate in offering the reduced rate for the spay or neuter surgery ($60 including deworming and vaccination).   Even during their trips to the family islands, separate from our MASH visits they will fit in some charity rate spay and neuter surgeries for Baark!

It is absolutely crucial for the cycle to be broken of so many unwanted puppies being born.  Our shelter is always full and the only way to change that is through your support of our continued spay and neuter efforts.  Thank you for your help!