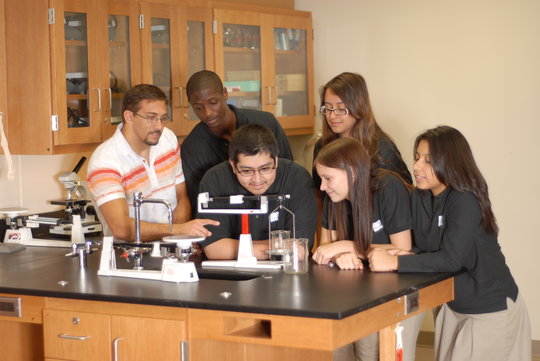 Thank you for your support of ‘Help Inner City Youth Visit and Apply for College.’ Because of your generosity, a group of six 11th grade students from Christel House Academy South (CHAS) had the opportunity to ‘head off to college’ and visit universities in Chicago, IL.

On March 16th, CHAS students and a CHAS teacher set out on a MegaBus from Indianapolis to Chicago to visit Roosevelt University and Loyola University for the weekend. The teacher who took them said the schools rolled out the red carpet for our students. Many inner-city students attending CHAS rarely travel outside their immediate areas, so the thought of attending school away from home is often very daunting. This trip not only enabled our students to move outside of their comfort zones and explore a new city, the students all walked away with a much better understanding of how they might manage going away for school.

Christel House Academy South is a public charter school on the near south side of Indianapolis serving a student body of 600+ inner-city, at-risk youth in grades K-12. More than 90% of these students qualify for free or reduced lunch. These students come from families facing great challenges including: unemployment, underemployment, substance abuse, incarceration, absence of parents, and lack of positive adult role models.

Your generosity is helping CHAS students realize their dreams for the future. On June 7th, Christel House Academy South will hold its first graduation. Most of our seniors will be the first in their family to graduate from high school and for the majority of their families’, college has not even been a consideration. 88% of our soon-to-be graduates have already received college acceptance letters. With your support, future CHAS graduates will be prepared for the steps ahead. Thank you for impacting lives. 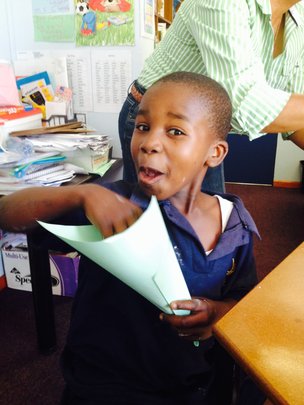 Chi Nguyen is an In-the-Field Representative with GlobalGiving who is visiting our partners’ projects throughout Southern Africa. Her “Postcard” from her visit to Christel House International in South Africa:

I watched as the children used words such as "taste", "smell", and "touch" to describe the popcorn. I couldn't help but smile as I saw that they were practically salivating as they jumped up and down, watching the popcorn pop in the microwave.

The children earned this popcorn party because they were able to spell the word "because" using what they called a "rhyme" to help them:

When they finally received the popcorn with some sugar dusting in their green cones, it seemed as if they could not eat it all quickly enough. As they ate, they shared stories, and a debate quickly popped up regarding whether little Cwendi was 8 (he maintained that he was) or if he was really 7. Without them knowing it, teacher Chamelle provoked their critical problem-solving skills and teamwork for them to find out Cwendi's real age. (He is indeed 7, as he turns 8 in July). They concluded the lesson with a quick review of how to spell "could", "would", and "should". They dusted the sugar off their hands and ran off, bellies full of popcorn, to the playground to join the rest of their classmates - no doubt eager to share their most recent "lesson" with their friends.

I stayed behind to chat with teacher Chamelle, and I quickly found out that I would be hard-pressed to find someone who speaks so lively and passionately about her profession. She gave me example after example of her past lessons for the children with enthusiastic gestures and an enormous smile on her face. When I commented on how impressed I was with the creativity of the lesson plans as well as how the children responded to them (with pride in what they had learned and how far they had come), she told me:

"These children are told all their lives that they can't do this, they can't do that right. It's not about can't - it's about all the little differences in each child. If there is one thing that I want these children to leave Christel House with by the time they graduate, it's the self-confidence to just try."

What drives you to succeed? 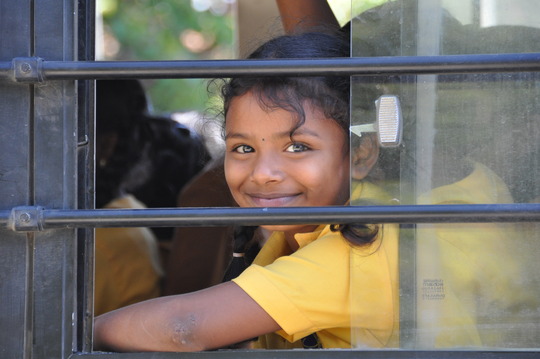 Geetha on her way to Christel House India

Christel House students often live in extremely unsafe environments. For example, Geetha is a bright 3rd grader at Christel House India - Bangalore. She lives with her family in an area that has been declared a slum by the government. Walking is dangerous. Bicycles are frequently stolen. Taxis rarely travel the areas where our students live—and even if they do, our families cannot afford cab fare.

According to the India National Crime Records Bureau, Bangalore has the second highest rate of crime against girls and women in India, including rape. These are the conditions our students must journey through on their way to and from school. But, the Christel House bus arrives every day to pick up Geetha and her classmates.

Transportation is a lifeline for our children and families trapped in poverty and crime that extends for miles. Every year, Christel House spends over $800,000 providing transportation to and from our schools in India, Mexico, South Africa and the United States. Without these buses, many students would never reach school because of the distance and danger.

Our children are motivated to do whatever it takes to break the cycle of poverty. Will you help drive them along this journey? Join us in an effort we are calling “DRIVEN TO SUCCEED,” and help us provide transportation to the students of Christel House.

‹ 1 ... 35 36 37 38 39 40 41 42 ... 49 ›
WARNING: Javascript is currently disabled or is not available in your browser. GlobalGiving makes extensive use of Javascript and will not function properly with Javascript disabled. Please enable Javascript and refresh this page.