The youngest member of the FSP 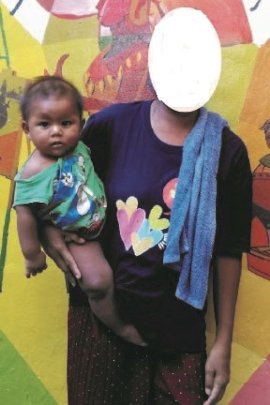 Ms. K and her son
Do you remember this devoted mother, Ms. K ?
Last year, we featured Ms. K a member of our  Family Support Program. We mention her again this year because it is important to understand how your support has helped Ms. K and her family over the past year.
Ms. K is a 40 year old mother with AIDS who has been in our program for many years. For much of her adult life Ms. K has supported herself in a subsistence lifestyle by collecting recyclables on the streets of Phnom Penh. As a single mom, she also supports her two sons:  the eldest , now age 10 and the youngest, a one year old baby. This photo was taken shortly before the birth of her son.
Some history about the baby boy
In early 2019, Ms. K decided, without our input, to leave Phnom Penh to go to live with her sister in northeastern Cambodia. For several months she was not being monitored by our staff. While visiting her relatives during the Cambodian New Year holidays in April 2019, Ms. K was raped by the husband of her aunt and she became pregnant.  The man does not deny his responsibility but he and his wife refused to provide any support for Ms. K or the baby, so she returned to Phnom Penh .
Where our program comes in
Ms K, returned to the care of our program where our field staff person worked to connect her with an organization which provides free infant formula to mothers who work, as she does, in trash recycling. This is a real blessing as the estimated cost of infant formula power is about $ 30 per month, additionally as a mother with AIDS, she could not safely breast feed her infant.
Ms. K continued to work throughout her pregnancy, pulling a cart around the city streets most days collecting recyclable materials such as bottles, cans, cardboard and scrap metal to sell to supplement the support from our program. High blood pressure some times limits the number of day when Ms. K can do such hard work but she works whenever she feels able, about an average of 3 or 4 days per week.
Previously, when Mark had asked Ms.K how she expected to do such work after the baby was born, Ms. K explained that when her older son (now age 10) , was born, she stayed in the hospital for three or four days and then immediately resumed working on the streets, keeping her newborn infant son in the same cart in which she hauls her recyclables. Ms. K explained, that once again, she intended to return to working on the streets very soon after the birth of her new baby.
We continue to provide support and assistance but Ms. K , determined to work to support her children, returned to her work with her baby, very soon after his birth. Ms.K is now , again , working hard , out on the streets where she continues to collect recyclable materials on the streets with her cart, reluctant to give up her tiny income and  independence , not becoming totally dependent on a program like ours which she fears could one day possibly end.
.
Your generous support really does make a difference. It means that we can continue to support fragile families like Ms. K, her son and her new baby and provide the living and the educational support that is needed to break the cycle of inherited poverty.
We are deeply grateful to you for your wonderful support.
Barbara & Mark 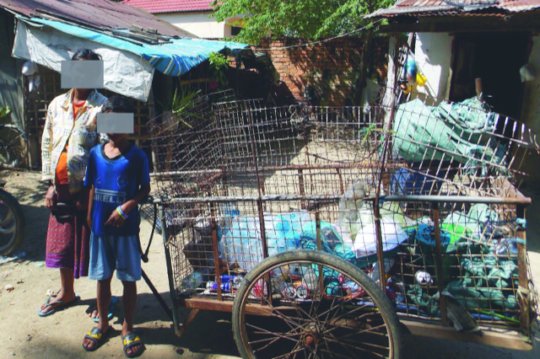 A Kasumisou Scholar who gives back to others 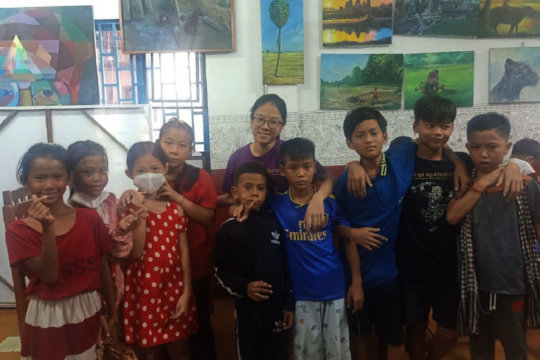 A Kasumisou Scholar gives back to others !

Earlier this year we  had reported that  in response to the Covid-19 threat, the Cambodian  government shut down much of the economy including  all of  the  schools and universities for the month of April.  In recent months, some things in Cambodia , such as the schools, have  returned to normal.  The government re-opened the schools and universities in August and our  five Kasumisou Scholars have all returned to classroom learning.  However, the economic impact of COVID  on the country has been severe, gravely impacting the two biggest drivers of the  "new" Cambodian  economy, the garment industry and  tourism, both of which remain in a severe recession.

This month we would like to  put a spotlight  on one student, Ms. S, currently age 24.

Ms. S  is studying English language education and she aspires  one day, to  become an English professor.  She is hopeful that she will be able to complete her Bachelor’s degree program at  the beginning of 2022.

Ms. S supports herself by working  full time  in the office at Champey  Academy. Juggling studies with work,  Ms. S continues to work hard toward her degree, hoping that upon completion, she will be able to go on to graduate school in pursuit of her dream of becoming a professor.  Ms. S. continues, as she has done for years , to work  extremely hard to  improve her own  life.

We are excited to report that recognizing  the opportunities that education can offer to kids from disadvantaged backgrounds like so many of the young students at our Champey Academ of Arts, Ms. S has recently decided to “ give back” and  to help others by volunteering to teach English to a roster of about 10 students from our art and dance school during her lunch hour.

Your generous support of our program has given  Ms. S and our other students  an opportunity  to transform their lives, giving them a real chance to break the cycle of inherited poverty.

We are so very grateful to you all for your support. 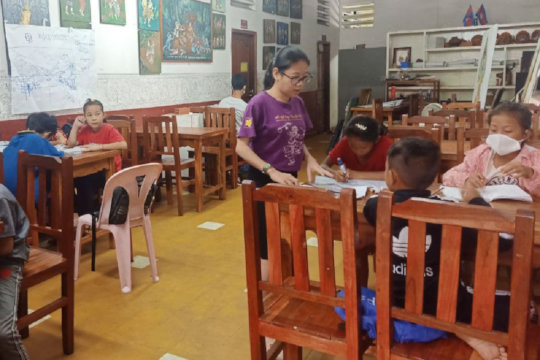 Ms.S and her lunchtime English Class 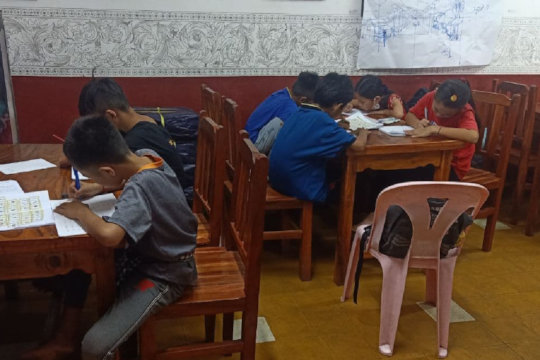 A Safety Net Put to Good Use!

We first started our AIDS Patients Family Support Program (FSP) in 1999. At that time, the streets of central Phnom Penh were populated by large numbers of homeless people, men, women, children begging, with  many of them  afflicted by AIDS . Some of our earliest FSP patients were women whom we found dying on the city’s sidewalks.  In those early days anti retroviral drugs were not available in Cambodia so the diagnosis of HIV infection was justifiably viewed as a death sentence.

We started our FSP program in direct response to the rampaging HIV infection rates in the population of Phnom Penh and the twin crises of homelessness and hunger which were by-products of the AIDS.

We encountered many, many AIDS afflicted women who had been widowed or abandoned and left destitute. As a result of this, we decided to focus our efforts only on women and mothers and only those women who were suffering from mid to late stages of AIDS.  From time to time, however, we encountered  a woman whose situation was so desperate and  so hopeless, that we would make an exception to those parameters and admit that mother  and her children into our program even though AIDS may not have been a factor in her poverty.

Early in September one of the young students in our arts school approached the school director to explain that although she would not be coming to class for a while , she wanted to ask him not to remove her name from the student rolls.  She explained that her father, who  had been imprisoned on drug charges, had been released from prison and had threatened to murder her mother.  The mother had quickly decided to take her three young kids – ages 2 years to 10 years – and hide for a while.  Things moved pretty fast  and the family left the one room shack which they had been sharing with another family. Their extremely limited resources forced them to start  living on the street, not very far from the location of our arts school where the oldest child, age 10,  had been an enthusiastic and often joyful dance student.

Once we had come to understand the family’s situation, we were able to locate them on the streets and   our team moved quickly to rent a small room for them and to enter them into the list of women in our Family Support Program.  Our program now pays the rent ($50 per month) for that very small room and provides the mother with an additional $75 per month for food support to supplement the small monthly income (approximately $100 to $150) which she earns from selling bird seed, snacks and soft drinks to tourists on the riverside in front of the Royal Palace.   We also purchased school kits (school uniforms, book bags, and required school supplies) for the two older  children who are  currently enrolled in primary school.

There is no guaranty that the woman’s husband will not come looking for them and we cannot be sure that they are no longer in danger. However,  our team is ready to swing into action again if it becomes necessary in order to protect this fragile  family and to try to provide a stable living situation for this courageous, hardworking  mother  and her three young children.

It is important to remember, families like these do not choose abject poverty and its  unpredictable additional misfortunes, but without resources they have no way out when something does occur.  Our goal , since the inception of Kasumisou Foundation, has been to find  ways to help fragile families manage their  current challenges with a longer term goal of enabling the children in those families to break the cycle  of inherited poverty by providing essential  social support to  their families   and  by creating access to educational opportunities for the children.

Out of respect for privacy, there are no photos available to accompany this update.

As is always the case, we deeply appreciate your kind and generous support of the families in our program. Your support really does make a difference in their lives.

1 2 3 4 5 6 7 8 9 ... 57 ›
WARNING: Javascript is currently disabled or is not available in your browser. GlobalGiving makes extensive use of Javascript and will not function properly with Javascript disabled. Please enable Javascript and refresh this page.