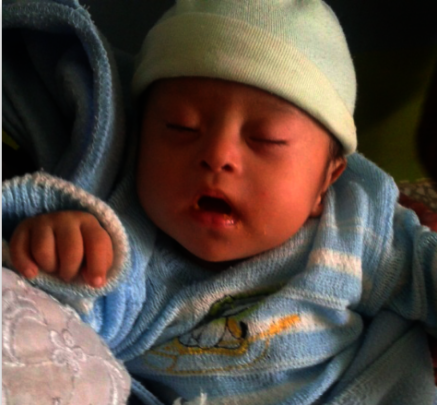 Carlitos is the second son from two young parents who were looking forward to their second child. His mom takes care of  the children at home and she takes Carlitos to all his appointments. His father is dedicated to work for wages with the neighbors and working at the cornfield.

Carlitos was born at home with a midwife but as time went by his mother noticed that  the breastfeeding was not the same and also that he was not growing the way he was supposed to.One day he got sick and  he was taken to see a doctor in the town. The doctor told the Parents that Carlitos had Down's Syndrome. He also had cataracts in his eyes and doctor said that he needed surgery, they also detected a heart murmur in Carlitos  and the family was very impressed with the news , they didn't take him back to the doctor.

From that first contact with the doctor the mother and the family did not know that to do with Carlitos so he could grow normally , so the mother began to give him oatmeal  but Carlitos had trouble eating it. The family was desperate because they saw that other children of Carlitos' age were growing very well and besides that they had never heard of Down's Syndrome .

Also they  were concern about what people  In the community was muttering. The family, especially the mother, began to be indicated by  people in the community because they believed that when a mother gives birth to a "special" child is because she is suffering consequences from  something she did wrong earlier in her life.

All this had the family very tense to the point that they were trying to hide Carlitos at home and stopped attending church and community activities so they wouldn't be not to be pointed out.Carlitos mother knew from a friend  about Wuqu Kawoq and looked for the offices to ask for help to understand what was happening with her  son. When they just arrived to Wuqu Kawoq Carlitos, was 10 months old and in severe acute malnutrition since his diet was inappropriate for his age so he was immediately referred to the center of Tecpán  for nutritional recovery where he recovered very quickly.

Since then Carlitos has had nutritional follow-up in home visits which include growth monitoring, supplementation, dewormer, formulas Nutrition and education, his mother has received nutrition classes from the program. Regarding the Down's Syndrome , he also had medical follow-up since he was 10 months with periodic medical checkups, laboratories and medications, it ruled out the heart murmur and performed eye surgery for cataracts, in addition to the placement of an internal lens which has helped him improve his view.

As time went by  the family understood, how a child with Down syndrome develops, how to stimulate him and how to nurture him properly. The family is very close now , the mother says “Carlitos has the support of his paternal and maternal grandparents, his aunts and uncles, he is a very dear child who has  been taught to overcome many obstacles in life”

Carlitos currently lives at his grandparents' house with his parents his older sister and his little brother, Esmelin who is the older sister is her teacher she says, since what she learns in school she teaches to  her little brother. Ana, the mother says she wants her son to grow well and get ahead, tries to do everything as she is advised so that Carlitos can have a better quality of life. 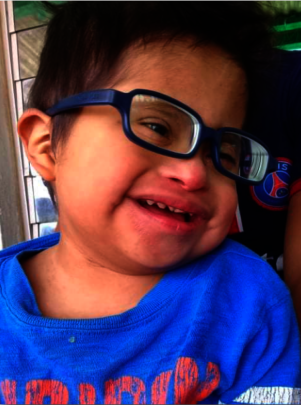 The Story of Juli and How she is fighting Malnutrition 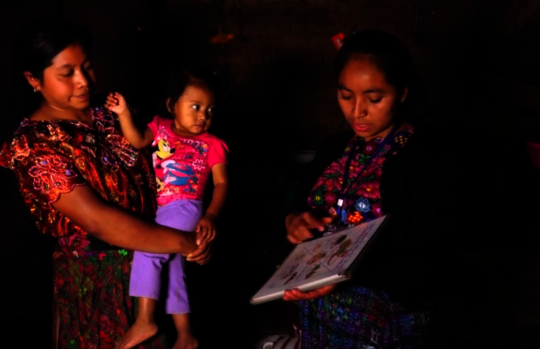 Rosa Working with Juli on the Field

Juli is a 1 year 10 month old little girl that lives in the remote village of Paraxquin, Guatemala. Her favorite food is eggs and black beans! Juli is the the first daughter to her parents and Juli's father is a farmer who works in the fields every day, sowing green beans and corn. At times, he will work for others in their fields. Juli’s mother is a master weaver. She weaves traditional women’s blouses on a backstrap loom. Sometimes her mother goes with her husband to work in the fields as well.

Juli was brought to the attention of our nutrition team, after being weighed and measured in one of our co-clinics with the Ministry of Health. We identified her with chronic malnutrition in April of this year. Chronic malnutrition is such a difficult situation for Juli because if we do not attack it quickly, it is irreversible, by affecting Juli’s brain growth and development, it means she will be more likely to be slower to talk, to run, to read and write and more likely to remain in the cycle of poverty and have lower life long earn income. We can change that through our personalized nutrition intervention that works with the child and parents to get their growth back on track.

The Wuqu' Kawoq | Maya Health Alliance team went to visit Juli’s mother to explain our nutrition program and inquire if they would want to participate. Juli’s mom agreed to participate in the six month home-visit program. She said she looked most forward to learning what else she can feed Juli. The program includes monthly nutrition classes for her mother as well as monthly food supplies for Juli, such as: beans, eggs, and nutributter, a supplement to encourage child growth.

We are thrilled to report that right now, Juli has normal weight and height, she is no longer suffering from chronic malnutrition, thanks to the committed effort of her mother. Juli’s mother was proactive in implanting the new diet for Juli, providing her with beans, eggs, and vegetables. Juli’s mother explained that she wanted to do the best for her daughter so she can grow up and graduate from high school, as no one in her family has yet to do. She wants to see her daughter become a professional. She wants to fight for a healthier future for her daughter. Juli’s mother also said she very grateful for being part of the Nutrition program, as she felt respected and listened to by Rosa, our nutrition technician. She felt that the services were personalized and so helpful because every visit was in her home, in her language and provided her with easy examples that she could implement for her daughter. We are very happy with Juli’s progress and we can’t do this without you! Due to your continued incredible contributions you make our life-saving work possible. You create a future for children like Juli. You are helping transform the next generation in Guatemala. 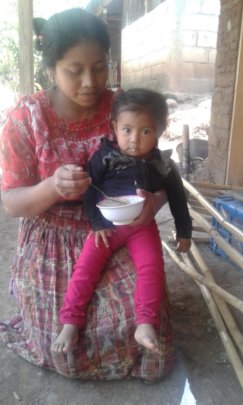 Juli having a nutritive meal 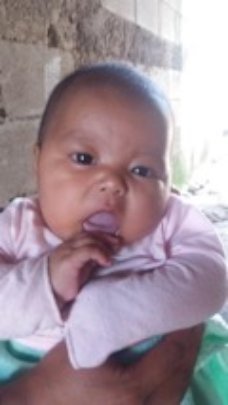 Candy was one month old when she entered into the Wuqu' Kawoq | Maya Health Alliance Nutrition Program. She is from the remote village of Paquip in the Guatemalan Highlands where rates of malnutrition have historically been greater than 70% among children under five years old. Working with the nearby health center, our local nutrition technician Rosa arranged a visit to Candy's home shortly after she was born. After being weighed and measured, it was determined that Candy was suffering from chronic malnutrition. While her weight was within normal level, she was very short for her age, suggesting that she was at risk for child stunting.

Over the next 18 months, Rosa made regular visits to monitor Candy's weight and provide her mother with support. She counselled Candy's mother about nutrition, helping her to plan out healthy meals using the resources available to her. In addition, Candy's mother began attending regular nutrition classes with other mother's in the nutrition program forming a community of mutual support. She also received monthly supplies of beans, eggs, and nutributter, a supplement to encourage child growth.

By the end of her time in the program, Candy was within normal weight and height for her age. Her mother is very grateful to have been part of the program and for the consistent attention she received from Rosa. 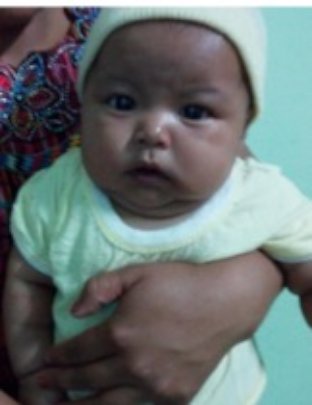