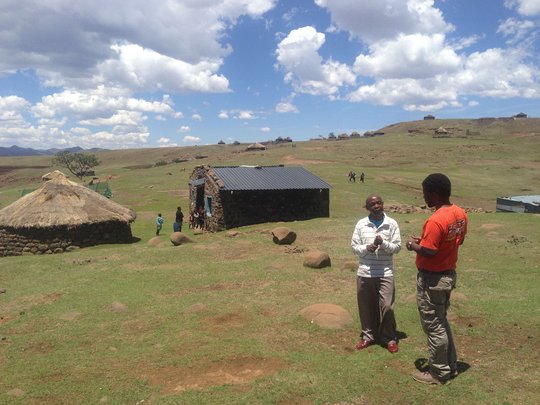 Speaking with a village chief.

The weather in Lesotho is finally starting to warm up, just in time for another update!

I shared progress on many fronts in my last letter: work on a new prototype, an energy monitoring program, new team members, and more. All of these projects are still ongoing, with the addition of a new initiative in the development stage with the Lesotho Ministry of Education, but this month I’d like to dial in on just one topic to keep it brief. (We are working to keep the website up to date for those of you looking for more! New photos should be up there in the next few weeks.)

I thought today I would share with you the pre-feasibility work our team in Lesotho is doing to identify rural (unelectrified) villages that are great candidates for receiving electrification through burgeoning programs aiming to promote minigrid development in Lesotho. The challenge is that the Government of Lesotho (and all governments, everywhere) currently has no reliable model for estimating (1) how much electricity a village will need or (2) how much it will cost to provide that amount of energy to the community. Enter Team STG! Here in the US we have been working for the past year to build an engineering model that can design a cost-minimizing system to electrify any village, anywhere – all we need to know is its location and something about the demographics and physical layout of the buildings. Our team in Lesotho has concurrently spent time in a number of rural villages between Maseru and Semongkong (relatively near to a newly-paved road), working with the village Chiefs and Google Earth satellite images to tally how many houses, businesses, institutions, and individuals are contained within each village. With the data they are collecting and the model we have built, we will be able to provide not only cost estimates but lowest-cost system designs to the government to support their new initiatives! This is a game-changing way of thinking about rural energy system design, and we are extremely excited to see it all coming together.

Final news is a "changing of the guard" in Lesotho.  Sadly (for us here at STG), Tamer left Lesotho in July to start his PhD this fall.  We are incredibly proud of what he learned and accomplished during his tenure with STG, and we are wishing him all of the best with his studies.  In response, in the interest of promoting an ongoing program of developing energy engineers and entrepreneurs and helping STG's work in Lesotho grow, the Board decided this summer to create a new Energy Access Engineering Fellowship program!  This program embodies all the learning and experience acquired through Tamer's time in Lesotho (his successes and challenges, our reflections on implementing this new level of management), and we are extremely excited to see this move forward.  We are very pleased to announce that our inaugural Fellow, Jordan Stephens, will be arriving in Lesotho this September - expect more about Jordan and his experiences in the next update!

As always, I would like to communicate how much it means to our entire team to have the support and following that we do - thank you again for being a part of our work. 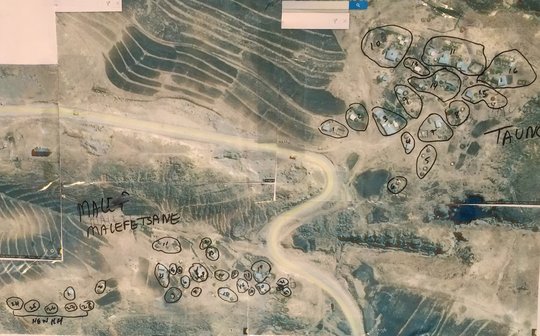 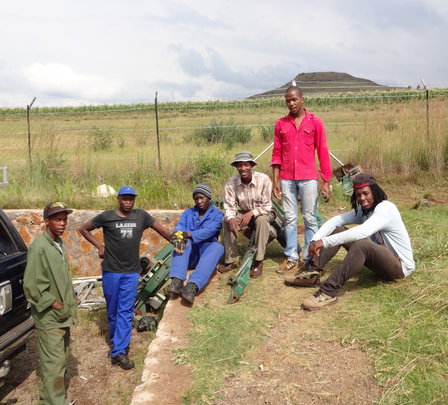 STG field team at the end of a long day. 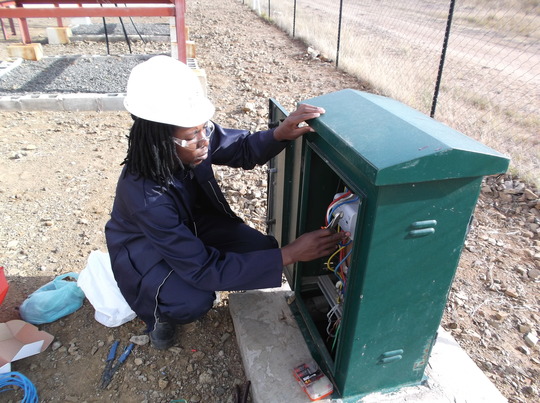 The months fly, hard to believe it has already been three months since our last update.  But much news to share from Lesotho, as always!

Most exciting is the recruitment of a number of new team members in Lesotho since February, including installation of our first full-time Project Manager in Maseru in March!  Tamer, who completed his master's degree at Harvard in 2014, had been working with STG in the USA since last June but was excited to gain some on-the-ground experience in solar research so was promoted to Team Leader in Lesotho.  So far he has been doing a fantastic job, and it is has been great to find someone willing to take on the challenges of this role.

Along with this promotion, we also hired a new Mechanical Engineering Technician and have two new interns working with us, all young and enthusiastic Basotho with technical interests and the drive to have an impact on the challenges they see facing their country.

Together, the Lesotho-based team has been tackling some big challenges, including designing and building out the production-line equipment for our newest version of solar collector.  They have been working from a computer-based model of the new collector to envision the molds and jigs required to create the correct shapes, build lists of the components required and determine the most efficient way to create each component, and thinking about how to most efficiently complete assembly of all of the sub-components.  We are working toward a first assembly of the new design by early fall, which will be unveiled at the Solar Paces 2015 Conference in Cape Town!

At the same time, we continue to push forward our work in rural energy system design, and one of the biggest challenges here is determining what size system will be needed for a place that currently has no access to electricity.  Writing out a list of what might be plugged in at the clinic and in the houses has been shown to be relatively unreliable (since you don't know how many hours each day people will use each item) - we at STG instead believe that there is much to be learned from how villages, clinics, and schools connected up to the national grid are using electricity!  We have thus started a systematic effort in energy monitoring, installing wireless (cell phone communications) electricity monitoring stations at a number of clinics and communities around Lesotho to learn what the daily pattern and volume of electricity consumption actually is.  From this data we will be able to more accurately estimate the needs of rural communities, allowing the government to optimize sizing for community systems and therefore ensure electricity availability while also maximizing the number of communities that can be reached with limited funding.

Of course still activity going on in many other directions, including the new manufacturing facility, working with the Government of Lesotho to push forward their vision for (and then implementation of) rural electrification using optimized solar minigrids, and much more.  We are working to keep the website up to date so that you can visit there any time to keep abreast of our activities.

Thank you again for all of your continued support, and we look forward to more exciting developments during the rest of this year! 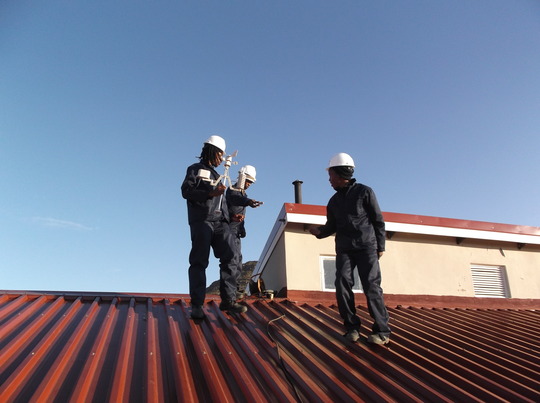 STG Interns install a weather station at a clinic 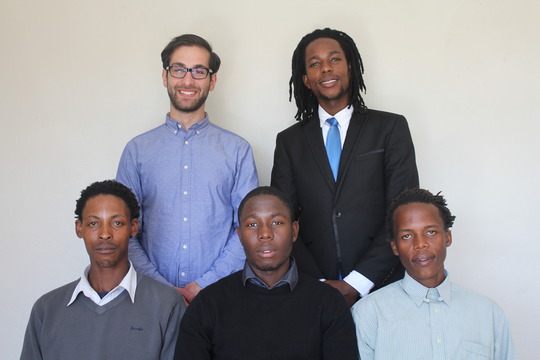 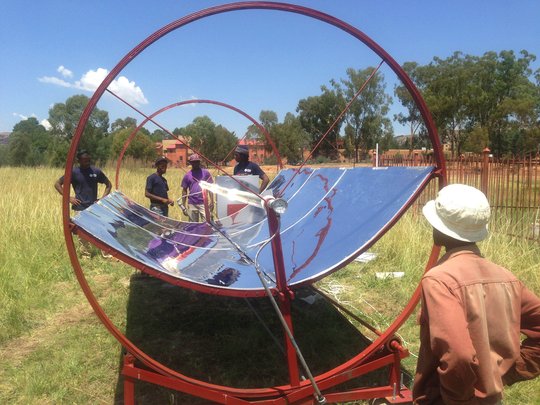 Lots of exciting news to share this month.  February was slated for completion of the educational system at the National University (NUL) that you have been hearing so much about.  Amy and I arrived mid-month to find that our team had things mostly complete, so we have been working on dotting i's, crossing t's, and getting the electronic automated tracking system installed.  Today everything really came together - the system was following the sun on its own, heated up the water reservoir to almost boiling in under half an hour, and looks great!  (Pictures included!)  Tomorrow is the hand-off meeting where the faculty at NUL will take over from us - as of next semester, this will be integrated into one of the project courses for the Physics and Electronics students as a hands-on example of both thermodynamics and embedded programming and controls.  You'll see in the picture we ran a "test lab" on our own team - our interns are reading the temperature and flow gauges on both ends of the trough to observe the temperature differential from one side to the other.  Science is so much easier to grasp when one can SEE it!

In other very, very exciting news, our new website and video are finally ready to share.  They both went live this week - please go see what's new!  The web address is the same as always (www.stginternational.org), and you will find our short video linked from the front page or under the "What We Do" section.  Comments and suggestions are very much welcome as we optimize the new look and environment to match people's interests!

As we wrap up these two projects, you may be thinking:  what comes next?  The answer is:  a new manufacturing facility!  We actually broke ground already this week adjacent to our workshop, preparing a 10m x 15m area for a new concrete slab.  As long as things go well with Lesotho's elections this weekend (!), the concrete will hopefully be poured in March.  Designs are still coming in for the building itself, but it is our hope that this solar-dedicated facility will be ready by mid-2015.  The new space is going to be optimized for solar construction and prepare the team for any number of new projects to come...!

Very much looking forward to sharing more photos and stories as they develop - and we are working hard to get more photo galleries up on the website as well to keep you informed.  Thank you again for all of you who have followed us this far and continue to provide a backdrop of support and enthusiasm for our work! 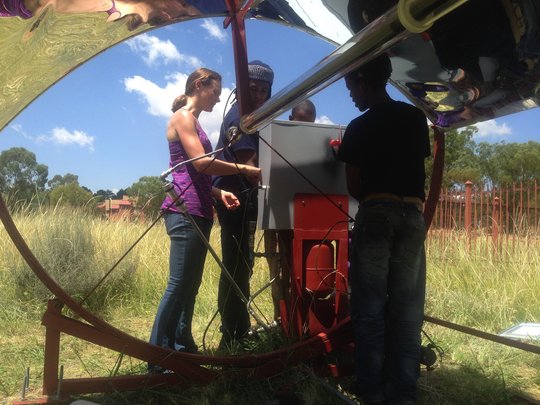