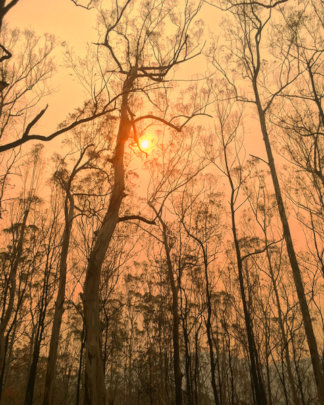 In the wake of the disastrous fires we have encountered across Sydney recently, I accompanied one of our great Sydney Wildlife volunteers, Senka Pupacic along with Frances Pike, founder of Australian Forests and Climate Alliance to help the wildlife affected by these terrible bush fires. Most of the places we walked and drove through still had smoldering earth where roots were continuing to burn underground.

Due to the intensity of these fires the authorities were not letting volunteers into areas until deemed safe. This could sometimes be a week or so after the fires before we are able to go in and help the native animals that had managed to survive.

We traveled to some of the worst hit areas towing trailers full of supplies to try and help the wildlife in need. While doing the "Black Walk" through the burnt-out bush in search of animals needing medical aid and attending to their needs we also, remarkably, identified some surviving wildlife communities.

This is where the trailer load of supplies really helped as we were able to put out fresh drinking water for the local wildlife that had survived as well as pelletized herbivore food and other important support feeds for animals needing this till the native habitat could start growing again and begin providing the food they need.

This food needs to be put out on a regular basis to continue to support the animals until their food grows back. Australia’s bush is built for quick regeneration after fires and within 2 weeks, new shoots were pushing through charcoal trees and fresh grass was reaching through the ashes.

We saw very little “life” but life loves the dead stuff. The enormous cooked forests were strangely beautiful, especially where you could see how quickly life would (and indeed already was) taking it all back.

Tiny pockets of living things did exist. Small oasis’ (by creeks and rivers) have given safety to animals during the fires and now food and water for the time being.

The existence of these places, and the survival of these animals, was entirely dependent on how human beings had treated the creeks, rivers and their surrounds.

In just a couple of hours we saw:

So life goes on for nature as it always does and where it has been nurtured, it gets a head start! 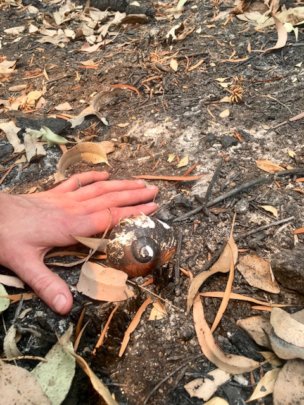 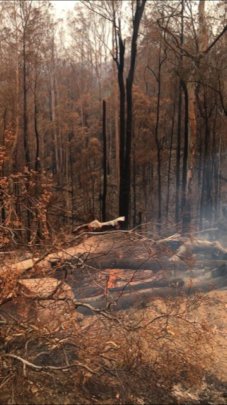 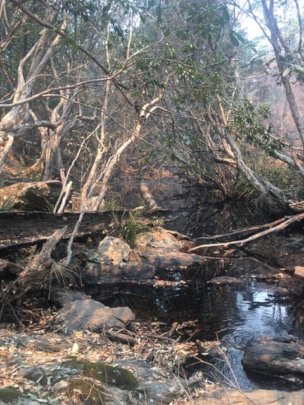 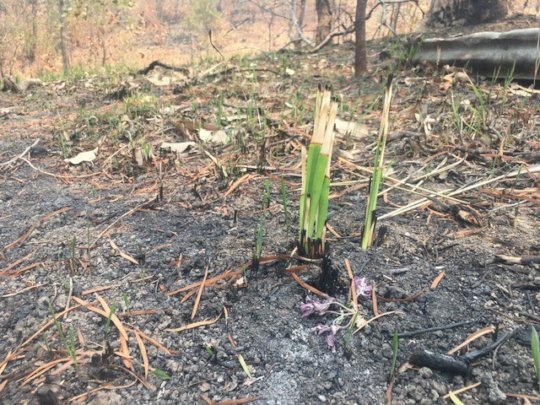 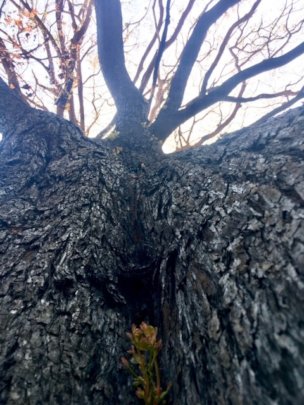 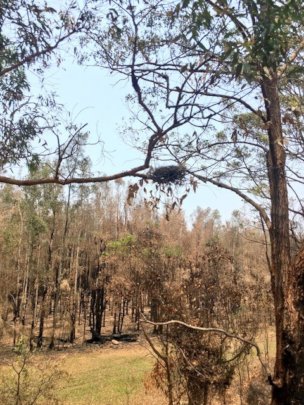 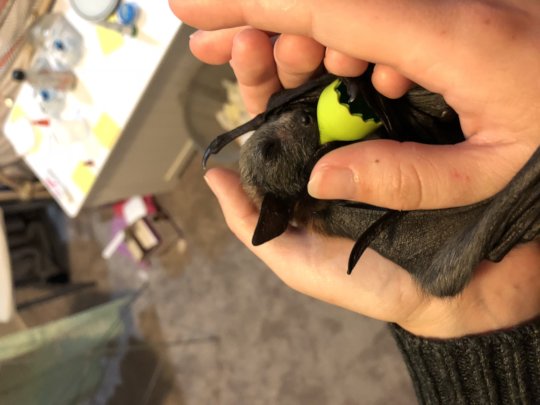 We have had a busy and long winter season, caring for about 300+ adults and juveniles that have managed to get themselves into trouble. We have released out last group with only 5 bats still hanging around and we are support feeding them.

Hopefully these last stragglers will leave soon and then we can begin the maintenance work around the facility, in preparation for the pup season that will start in around 6 weeks. We need to give the cages a thorough clean, repaint the cage floor surfaces and generally tidy up the surrounding area.

One exciting new addition to the facility that we hope to get done will be a concrete pathway. During the height of pup season we can be cutting between 50 and 80kgs of fruit daily to feed the little cherubs in care. This is between 350 - 560kgs of fruit every week - converting this for you -770 to 1235lbs! This is a huge amount of fruit we have to move from the cutting room to the aviaries, which currently we carry up to the cages in large buckets- hard on the backs of our volunteers. A concrete pathway from the cutting room to the cages will allow us to use a trolley to take the fruit right up to the cage door.

We have a just completed our yearly training course, which saw a number of Sydney Wildlife bat carers doing their mandatory refresher course and 5 new flying fox carers (hooray!), just in time for pup season.

Thank you so much for all your generous donations that enable us to continue to rescue, rehabilitate and release back into the wild our beautiful bats. We could not do it without your help. 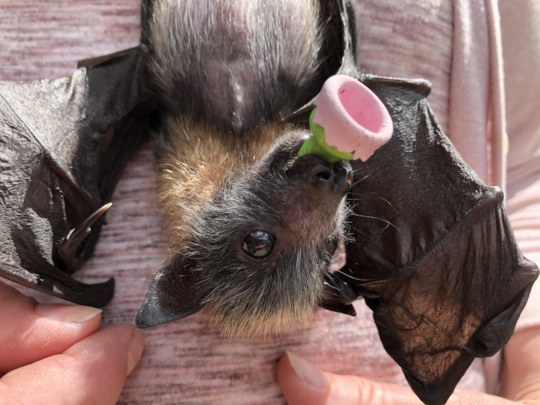 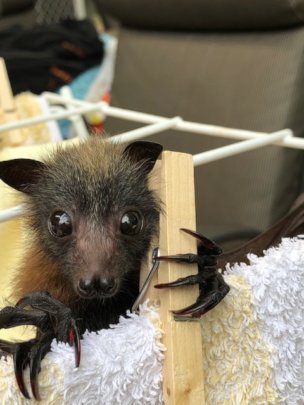 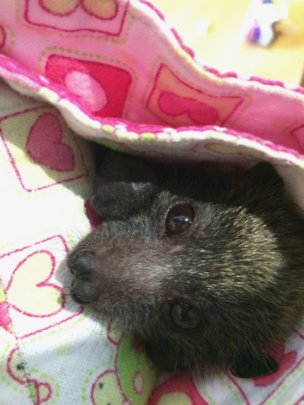 Happy Ever After Story 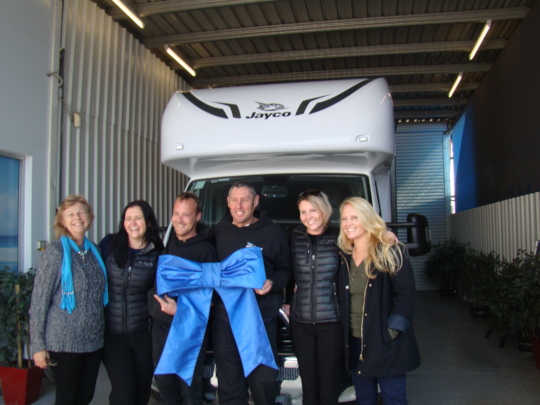 In addition to the wonderful work Sydney Wildlife does in the community and the rehabilitation facilities we are able to provide at Waratah Park, we have spent the past two and a half years working hard towards purchasing a motorhome to be converted into a Mobile Wildlife Clinic.  The clinic will be used for the treatment of injured and sick native wildlife in Sydney.

Excitement reached fever-pitch on 14th August when we finally drove our brand new van back from the factory!

In April we found exactly what we wanted - a Jayco Conquest FA 25-1. And because Jayco Sydney gave us such a good deal, we were able to afford a brand new one!  We were allowed to make a few decor choices but the main thing would be getting internal modifications done.  The team at Jayco were so helpful that they offered to do the modifications for us at their cost and they threw in a generator!

We are now working on getting all the equipment installed and getting the logo and graphics onto the vehicle but the hardest part is over.

Now we are coming into spring we receive a lot more calls for wildlife rescues.  Once they have been checked by a specialised wildlife vet in the new mobile clinic and have been nursed back to health, they will then be able to complete their rehabilitation in our facility before being released back into the wild. 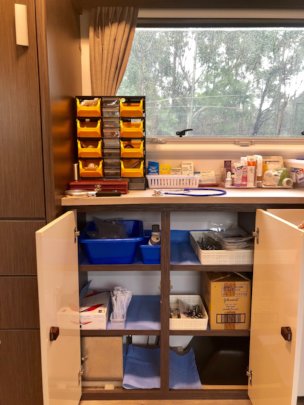 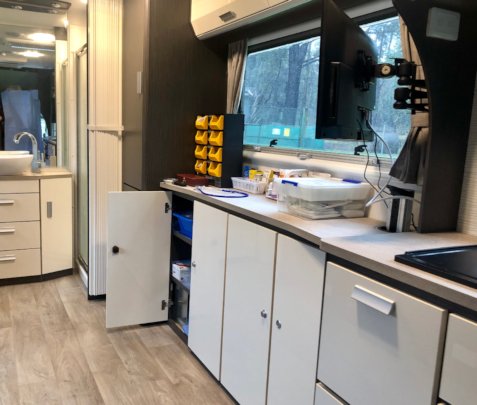 Inside the clinic. More equipment to come. 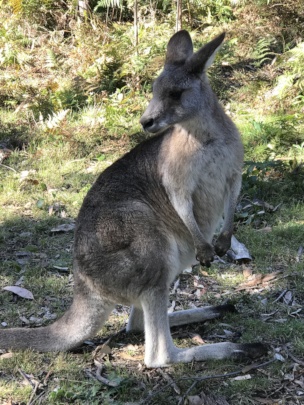 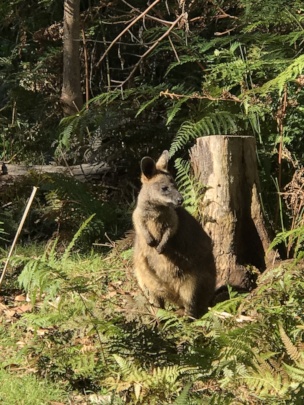 Swamp Wallaby in rehabilitation facility
‹ 1 2 3 4 5 6 7 8 9 ... 22 ›
WARNING: Javascript is currently disabled or is not available in your browser. GlobalGiving makes extensive use of Javascript and will not function properly with Javascript disabled. Please enable Javascript and refresh this page.