We Are There for Manyatta Youth 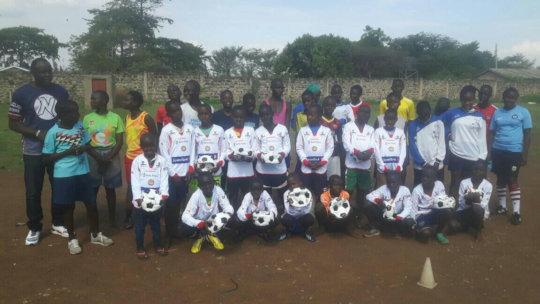 After the partial Covid lockdown was imposed in March 2021 throughout Kenya, schools were allowed to reopen in early May. That term is almost complete, and after a week’s break, a new term will begin at the end of July 2021.  This return toward normal is a welcome relief for the young people of Kisumu and our program participants with the Manyatta Youth Resource Centre, principally funded by Equip Manyatta.

We have always done everything in our power to make sure our youth can attend and stay in school.  We also make sure to honor our students who have outstanding achievement like Grace, who scored very high on her school exams this term.  We also invited Grace’s mother to be recognized, as we know the family can make all the difference to a student working hard in school.

The MYRC recently received several important donations from folks who have visited our programs.  Visitors from Norway have provided soccer balls and fresh team jerseys for our younger teams of girls and boys. The pitches we play on are very rough, so it is always a big plus to get an infusion of new equipment. And it’s a vote of confidence when visitors are moved to provide us with such welcome donations.

In May, a small group visited the MYRC from the US State of Illinois and generously provided sizeable donations of food for our youth and their families.  With the economy still deeply affected by Covid, food donations are greatly appreciated. Visitors to our programs can be confident that their donations will go to those for whom they are intended.

Even during the pandemic, our Senior Team continues to compete in FKF Division Two, currently placing third in the Division. The costs of competing include transportation and accommodations while at away games and are always a stretch for the MYRC budget. But playing for teams in this division have proven to be a springboard for player advancement. One of our long-time players, Benson O, is a young man who now has a successful professional career and is playing for Sweden Division 1 team Lingcoping City, based to the southwest of Stockholm. Quite a long way from home, but a terrific career opportunity thanks to the MYRC and lots of hard work!

Our Graphic Arts group continues to create vibrant posters and promotional materials that highlight the programs available to youth through the MYRC and the achievements of our participants. Their experience and portfolio development are serving these artists’ professional goals in a field that has many potential opportunities.

Access to computers and the internet at the MYRC office provide our youth with experience and knowledge they would have no other way of attaining. While trying to work in a Covid safe manner, our young women and men gather in small groups at the office to research information that will help them in creating a better life.

It’s a difficult time in Kisumu and throughout the world. But the Manyatta Youth Resource Centre continues to provide a safe haven for our young people thanks to committed leaders and your continuing support.  We’ve gotten this far thanks to you.  Please help us keep building a better life for our youth and our community.  Thank you! 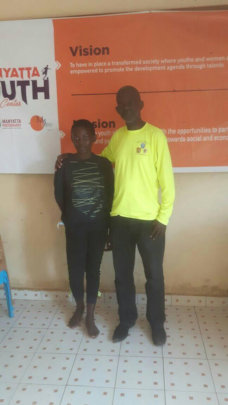 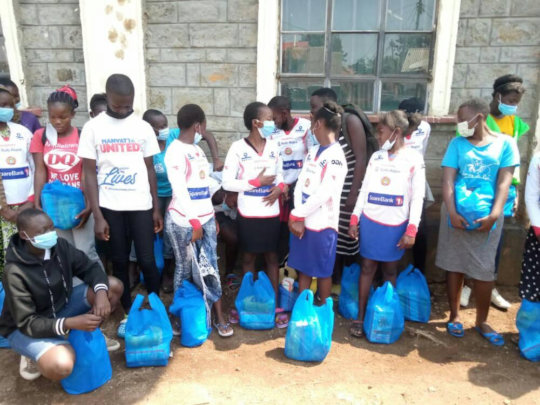 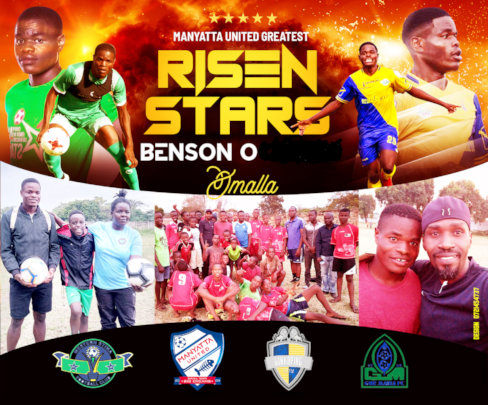 Benson, a football success and now in Sweden 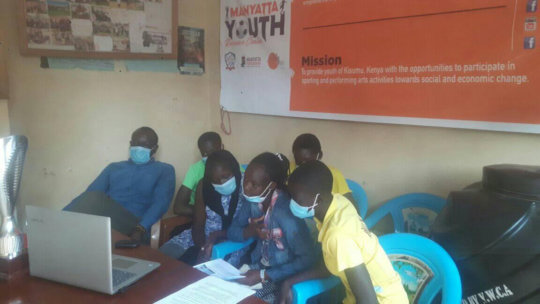 Learning how to gain knowledge with the computer 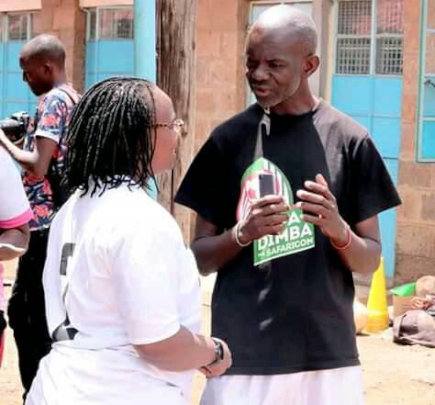 A Bright Spot for Kids at a Difficult Time 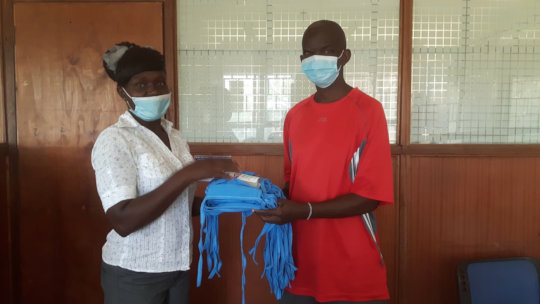 In the midst of troubled times the Manyatta Youth Resource Centre (MYRC), with major funding from Equip Manyatta, continues to be an island of stability for young people and their community. The Covid epidemic is still raging in Kenya, mercifully a bit less so in Kisumu than other parts of the country.  As of 10 days ago only 20,000 doses of vaccine had been administered nationwide.  A newly approved scheme will furnish two doses of the Russian Sputnik vaccine for 11,000 Kenya Shillings, or a little over USD $100, obviously a price few can pay.

The MYRC provides a focus for distribution of supplies needed by the community.  Handwashing stations continue to be available at the office.  Masks and sanitizers were recently donated by the Seline Children’s Office for distribution in the community.  The MYRC makes sure that these potentially life-saving supplies are easily available to our young people and their families.

Developing girls’ potential continues as a major focus for MYRC activities. Girls’ soccer is played at several skill levels and clinics occur regularly.   The basic needs of girls are considered. When needed, the MYRC has put out a call for donations of sanitary products and that call is answered, as happened recently.  Thanks to donor Leah O, our girls were able to get much needed supplies this month.

Our young artists continue to produce vibrant posters to publicize events such as the FKF Division 2 Senior Team Fundraiser, which will be held March 27.  The new soccer season is starting and the expenses of travel and transportation will have to be raised for our team to successfully compete.  Playing at this level has been critical for our players to advance to a professional level so it is important to keep this team in front of recruiters.

This sort of exposure is how one of our long-time players Benson came to be picked up by Kenyan Premier League team Gor Mahia.  Soon he will on his way to Sweden, playing on loan to FC Linkopings from April to December 2021.  What a life changing experience for a young man from Manyatta! He was one of our stars in the most recent Chapa Dimba na Safaricom tournament, where our team took the national championship.

Our former players who have moved on make sure to visit the MYRC when they return to Kisumu.  Ian S, who is currently playing for Kenyan Premier League team KCB recently came by with a donation of equipment and to demonstrate to our youth what could be possible.  The younger players can dream big when they can see what Ian has achieved.

And not all of our successes revolve around soccer.  Our former player “Drogba” is now, himself, working with children.  He now runs a children’s home in Kisumu for some of the many who find themselves orphaned due to HIV, malaria, and now Covid.

Recognizing the lessons that can be learned at the MYRC, the Kisumu National Polytechnic Institute has begun fielding interns to work with us.  They recognize the important work we are doing and the interns themselves provide an example for our young people who see that with hard work, they can continue on with post-secondary education and find a career that will lift themselves and their families to a better life.

Through all of this, our leadership team continues to look for every advantage they can bring to the MYRC young people. The MYRC is a bright spot of energy and creativity that your donations help to keep going.  It’s never been more important to keep the positive energy flowing for the girls and boys of the Manyatta Youth Resource Centre.  Thank you for whatever help you can provide! 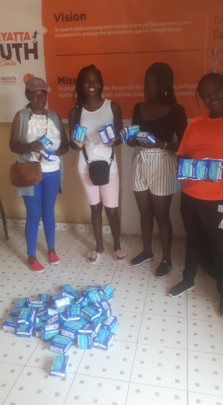 Our Girls Get Needed Sanitary Supplies 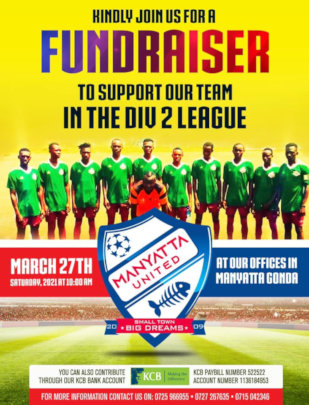 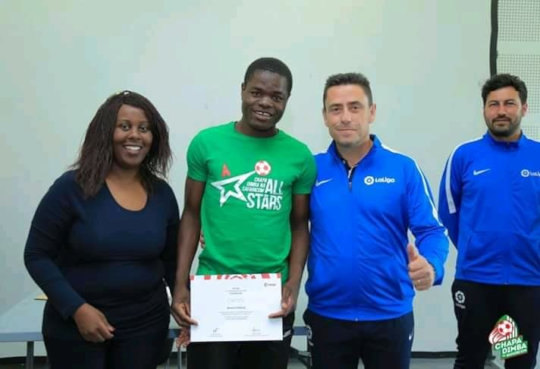 Benson at Chapa Dimba and Now a Pro 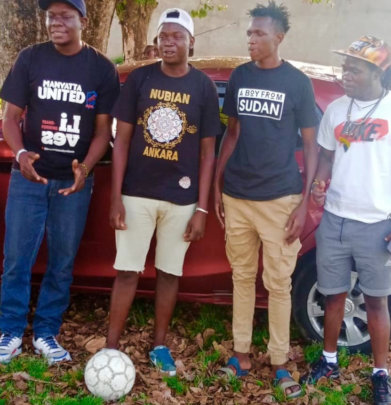 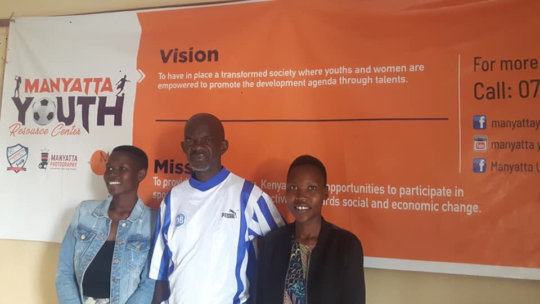 The MYRC's Work is More Important than Ever

As it has all over the world, Covid-19 has presented life changing challenges to those living in the Manyatta slums of Kisumu. The Manyatta Youth Resource Center has been there throughout to help young people and their families cope. Among the very first actions taken by the MYRC after the onset of Covid-19 was setting up a rudimentary hand washing station at the MYRC office, which functions as a de facto community center. This consisted of a water tank and soap along with instructions on how to effectively wash hands. In a community where running water is scarce, this was a vital step and it involved not only the youth already associated with the MYRC, but family members and the community around the office. The local YWCA, which has been partnering with the MYRC on health, women’s, and gender issues for a number of years, recognized the importance of hand washing and was able to provide a larger water holding tank, which was set up at the office for community use.

As they became available, the MYRC distributed masks along with directions on how to properly use them and on the importance of maintaining distance among people. By regularly wearing masks, the leaders were able to demonstrate their importance.

One of the first actions taken by the Kenyan government was to put in place a curfew, which was strictly enforced for a time, closing many small businesses and the local marketplaces. This left some without the ability to procure food. The MYRC was able to get permission to step in and drop food bundles to the most needy and infirm in the neighborhood. The curfew was later modified to run overnight from 9 PM to 4 AM.

The academic year in Kenya runs from January to November and primary and secondary schools were completely shut in March due to Covid. Without school, the Manyatta youth are turning to the MYRC for guidance and safe activities and the MYRC leadership has been working hard to provide them.  Soccer continues to provide an outlet for both girls and boys from primary aged into young adult. Although players on the field do not wear masks, when off the field they do. Not only is soccer a worthwhile activity in itself, the team building and cooperative skill learning continue to be a crucial aspect of the program.

The recognition received by the MYRC soccer program and particularly its National Championship win at last year’s Chapa Dimba Na Safaricom tournament has yielded many benefits both on and off field. For instance, in late September, the Safaricom Foundation provided food and provisions for more than 500 Manyatta households with special needs or elders, which the MYRC distributed.

More recently, soccer balls and food were donated to the MYRC for distribution by The Honorable Ms. Rozaah Buyu, who represents Kisumu in the National Assembly.

Meanwhile, our program graduates Sidney and Benson both signed with club Gor Mahia, also known as K’Ogalo, a pro club based in Nairobi that has won the Kenyan Premier League a record 18 times. Both Sidney and Benson started as youngsters with the MYRC and have seized the opportunities the MYRC provided to create better lives for themselves and their families.

In MYRC art programs, the Naweza Films miniseries Anita about life in Manyatta continues to film episodes, which are available on YouTube.  Graphic Arts are also being explored with the creation of posters honoring MYRC graduates.

Even, and especially, in these trying times the funds provided to the MYRC by Equip Manyatta thanks to YOU keep the Manyatta community engaged in vital programs in Football/Soccer, HIV/AIDS education, Drug and Alcohol Abuse Prevention, Health Education, Prevention of Gender Based Violence, and Peace and Conflict Resolution. Many lives have been changed thanks to you.

Please remember Equip Manyatta as this year closes, and Thank You for all you have done in the past. May the year 2021 be remembered as a time of peace and new beginnings! 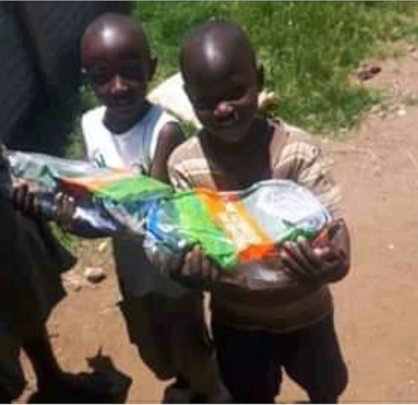 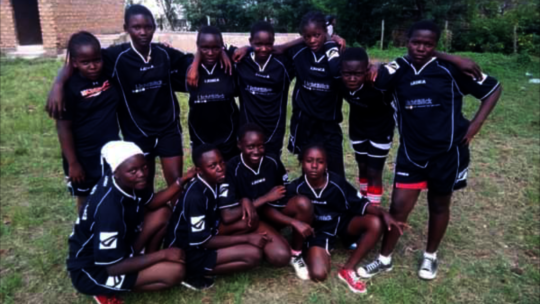 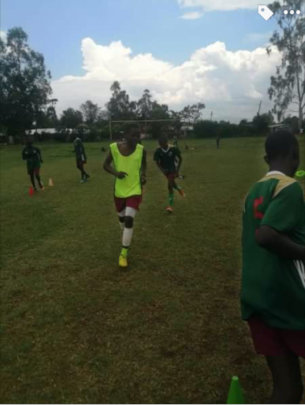 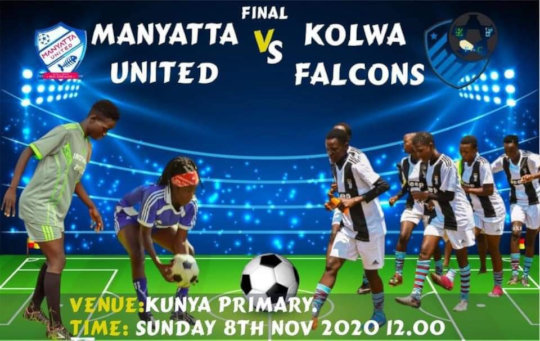 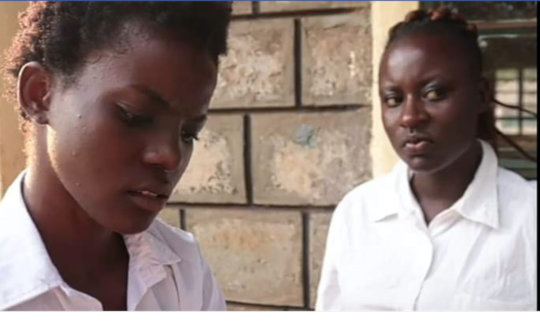 Screen Grab from Anita Miniseries
1 2 3 4 5 6 7 8 9 ... 12 ›
WARNING: Javascript is currently disabled or is not available in your browser. GlobalGiving makes extensive use of Javascript and will not function properly with Javascript disabled. Please enable Javascript and refresh this page.