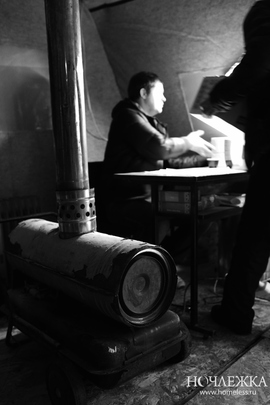 Winter has come – the most difficult time of the year for those who have no place to stay.

The average winter temperature in St.Petersburg is -11’C. And it can be not warmer than -20’C for several weeks a row in the day and -28-30’C in the night.

Even according to the official statistics, 1042 homeless individuals died in Saint Petersburg between November 2012 and March 2013. Hundreds of people became disabled due to limb amputations

This is why Nochlezhka asks you for help. Since 2007 Nochlezhka opens winter “Heating Centers” for homeless. A Heating Center is a large tent, which can accommodate 60 people. Anybody who needs a place to stay warm during cold winter nights, can get a shelter, two meals (dinner and breakfast), clean clothes, medical assistance and a consulting session with a social worker there from the beginning of December to the end of March.  From December, 1th two such centers were opened.

We suggest that during the month of December you make a donation via Global Giving web site at Nochlezhka page: http://www.globalgiving.org/projects/support-the-rehab-shelter-for-russian-homeless/

Global Giving offers NINE bonus awards to the top projects that raise the most money from their supporters in GlobalGiving’s first-ever Year-End Campaign. The campaign begins at 12:01 am EST on December 1stand runs through 11:59 pm EST on December 31st.  Projects must raise at least $3,000 from 30 donors in order to qualify for a bonus award. Bonus awards will be given to organizations that have met the designated thresholds and raised the most funds respectively.)

During the last 12 days of the year, GlobalGiving will be offering a one-time 100% match on all new recurring donations of up to $200 per donor!

Dear Friends! The holiday season is the best time to help those who do not have a family to rely upon. Let’s make the upcoming winter a little bit warmer for the homeless, and let’s help homeless individuals stay alive. Thank you for your continuous support!

Here are some of our news from the last three months:

The results achieved by the counselling service  in September – November

19 employed (including those with accommodation provided)

Assistance in going back home to a different town  37

Assistance in obtaining a medical policy provided to 4 people

Placement at a rehabilitation centre  2 people

Placed at a rest home  3 people

Food packages given out to  428 people.

Clothing given out to 761 people.

The renovation of the rooms in the shelter has been finished and all of our residents have moved to renovated and more comfortable rooms.

We are still renovating our building. In November reconstruction of the rooftop has started and is still in progress.
Using the money subsidised by the municipal committee on social policy (1 million RUR/30 303 USD), Nochlezhka bought a portable toilet which is now placed in the court yard of the organisation. Besides, we ordered double doors to install them at the entrance to the building.

The annual music festival organised by Nochlezhka was held on 2 November in A2 Club. This year the performers included Boris Grebenshikov, Zhenya Lyubich, Nogu Svelo! and Zorge. The set was designed by famous artistic group Mitki (Dmitry Shagin, Nikolay Vasiliev and Andrey Kuznetsov).

1017 tickets were sold for the event and the venue was practically full. The total amount of money raised is 922 647 RUR/27 959 USD. This money is enough to fund the work of the shelter for the homeless in 112B, Borovaya str. for three months.
We are very grateful to everyone who made this festival happen: the musicians, who performed for free, the artists, who did not charge anything for their designs, the club that provided the venue at no charge. We would like to thank all the sponsors of the festival, our volunteers and employees. Owing to all these people, the shelter keeps running! The festival was broadcast and covered a lot in mass media.

Campaign in the Summer Gardens

On 20 September Nochlezhka organised a campaign called Marble people against hearts of stone. The campaign was run in support of the homeless – who knows better about living on the streets than statues? Just as the homeless, statues have no other home but streets and parks, no other roof but the skies above.

For several hours little signs were put next to the statues living in the Summer Gardens in order to draw people’s attention to the issue of homelessness. They had slogans on art and homelessness. For example, ‘Standing in the street is easier than living on it’, ‘Art is under protection. Man is defenceless’, ‘Even statues get sheltered for winter’.

This campaign was widely covered in media and we had a good photo session with the signs. In the following months we are planning to use these photographs as posters which will be put around the city as social advertising.

Nochlezhka’s projects in social advertising got the first prize at the P.O.R.A. International festival

Nochlezhka’s projects were awarded at the 7th International festival of social advertising P.O.R.A. The ‘This side of life’ graffiti campaign received the golden award among professional projects and the Marble people against hearts of stone held in the Summer Gardens took the second prize in the same category.

The graffiti campaign called This side of life was held in August. Images of homeless people were sprayed over temporary fences of the city accompanied by an inscription saying that over 4,000 homeless people die on the streets of St. Petersburg every year. The signs remind those that warn the people of Leningrad living under the Siege during the WWII of the danger during shell attacks. During peace, however, the most dangerous side of life is the one where the society is indifferent to homeless people.

Nochelezhka’s legal consultant has finished his analysis of regional legislation in 40 regions of Russia. In each of these, the rights of people without registration and/or papers are violated on the legislative level and there are hundreds of them.

Nochlezhka’s report is already been submitted to President’s Council on Development of Civil Society and Human Rights and to the Commissioner for Human Rights in Russia, Vladimir Lukin. The charity is hoping that the council will propose a total inspection of the legislation in all subjects of the Russian Federation by the Public Prosecution Office of the Russian Federation.

At the end of October, the director and the lawyer of Nochlezhka met with officials from the municipal committee on social policy. They discussed the most important issues that need to be resolved in order to make the lives for homeless people more comfortable.

At the end of September Nochlezhka was visited by the Commissioner on Human Rights in Leningrad Region. As a result of the meeting, it was decided that in November Nochlezhka will hold a round table with the Governor of Leningrad region. The main subject will be opening two or three social institutions in the area.

In late October our legal consultant had a meeting with members of State Duma. This meeting took place on the International Day for the Eradication of Poverty and was organised by Oxfam.

Nochlezhka took part in the 23rd International Film Festival Message To Man, which took place in St. Petersburg on 21-28 September. The programme included a Polish documentary Albert Cinema about people living in a shelter who are keen on films and start shooting their own ones. This film was kindly provided to us for the screening by the Polish director Agnieszka Zwiefka, and this was the Russian premiere. All the money raised from ticket sales was forwarded towards running our shelter. 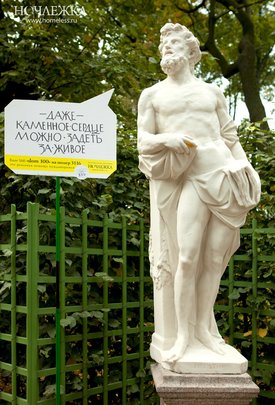 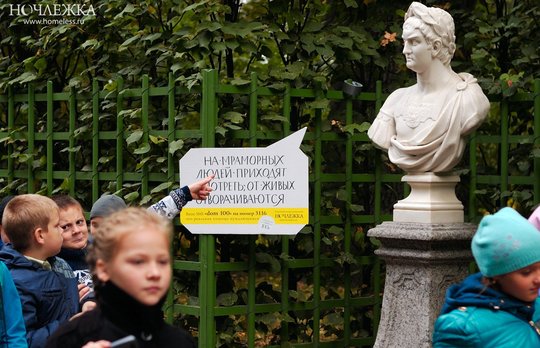 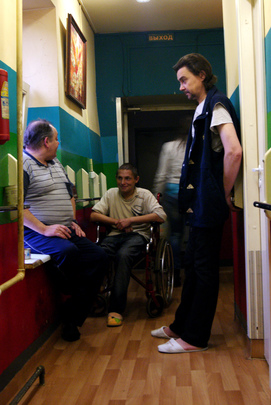 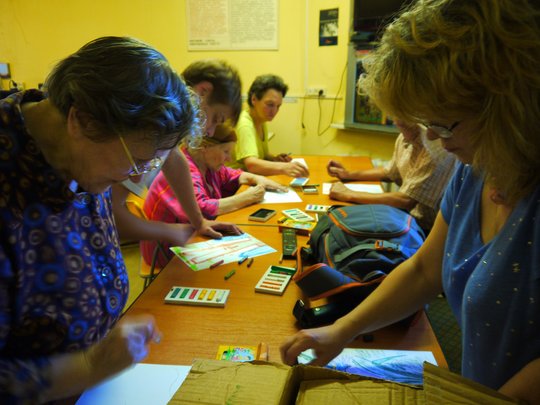 Art-therapy in the shelter

-       Assistance in obtaining job (including workplaces which also include housing): 15 people

-        Assistance in obtaining a replacement Russian passport (including those requiring legal assistance) provided to:  22 people

-        Assistance in search and acquiring accommodation (or registering for a waiting list as those in need of accommodation) provided to:   8 people

-        Assistance in obtaining treatment and disposal to hospitals:  10 people

-        Assistance in identification of citizenship or in obtaining a foreign nationality passport: 2 people

-        Assistance in obtaining a replacement Taxpayer’s Identification Number (or obtaining a new one after registration): 2 people

-        Assistance in applying for a disability allowance and placements into waiting line to rehabilitation centers: 3 people

-        Placement into rehabilitation centers for elderly and disabled people: 3 people

From May till August our shelter hosted 105 people

During July and August volunteers and employees of the project fed 1220 persons, 7566 portion of hot dinner were distributed.

During August Nochlezhka realized the social graffiti campaign "This side of life", which was developed by the advertising agency Great – long term partner of our organization. Nochlezhka’s volunteers have put over fifty pictures on temporary fences.

On many temporary fences around the city one can see images from daily lives of the homeless with the following text: ‘Beware! With our indifference, this side of life is the most dangerous one. Each year over 4,000 homeless people die on the streets of St. Petersburg. Find out how to help on homeless.ru’.

One of the results of the campaign is the initiative from Moscow authorities to put social graffiti in the streets of Moscow that would point at the nearest shelters and canteens for the homeless.

‘The number of articles and reports on our campaign is an achievement in itself. It is too early to speak of victory over people’s indifference towards the homeless but we have definitely managed to break the information blockade. We are expecting initiatives from the municipal authorities designed to help the homeless during the cold months. It is time we thought about it,’ says director of Nochlezhka, Grigory Sverdlin.

Last year there were only four heating stations in the city, and two of them were badly located and homeless people could not get there. The total capacity of all the tents did not exceed 120 people. Whereas according to the official census alone, the homeless population of St Petersburg amounts to over 28, 000 people. The real number, according to experts, is about 60, 000 people. 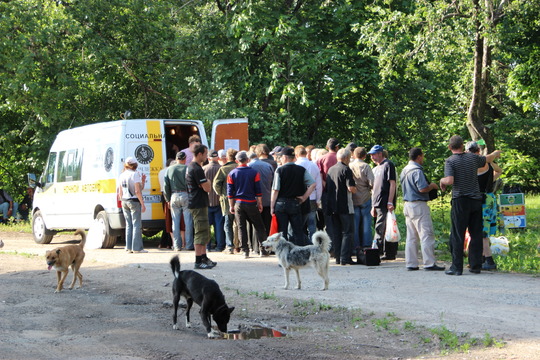 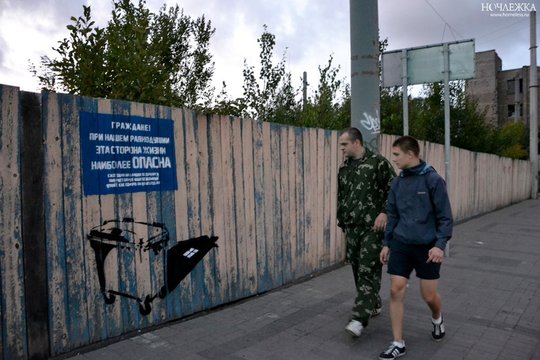 Social graffiti "This side of life" 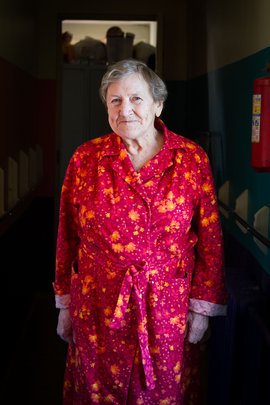 - Assistance in obtaining treatment and in acquiring medications - 26 people

- Assistance in getting back home in a different town - 2 people

- Assistance in registering in the night shelter - 6 people

- Assistance in applying for a pension – 10 people

- Assistance in applying for a disability allowance – 15 people

In March and April the shelter hosted 83 people. 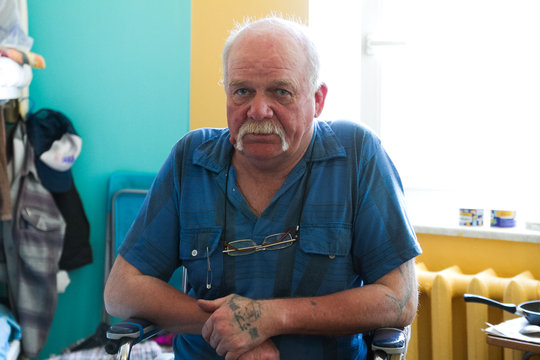 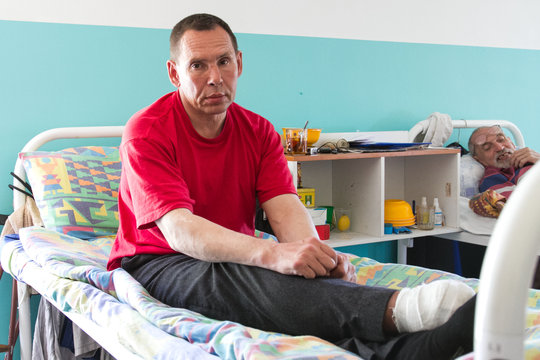