A Headmaster Sees the Change Brought by the Teen Girls Club 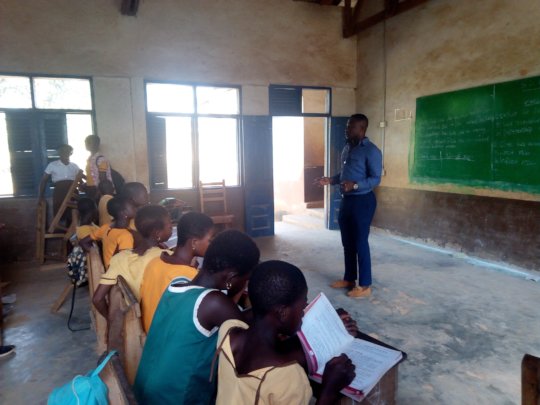 The Teen Girls Club is competing for a spot in the 2020 GlobalGiving Girl Fund, and we need your help! Between March 6-13, Self-Help's Teen Girls Club project on is competing for one of eight year-long slots in the GlobalGiving Girl Fund. The eight winning projects will receive monthly funding from the Girl Fund. Girl Fund winners from the past three years have raised between $10,000-$15,000 during their 12 months of funding.

How can you help? By making a gift of $10 or more on GlobalGiving.org to the Teen Girls Club between March 6-13 and urging your friends and family to do the same! Click here to see the terms and conditions.

Nkontomire is a small community located in the Atwima Nwabiagya Municipality in the Ashanti Region of Ghana. It is about 40 kilometers from Kumasi with a population of approximately 500 people. It is a rural community with basic social amenities such as safe drinking water, electricity, and a school. Most of the people are into farming; they cultivate large quantities to feed their households and also for commercial use. Some people are also into cash crop farming such as cocoa. Due to the great contribution the community makes to the agricultural sector, it has attracted many community development interventions from non-governmental organizations such as Solidaridad, MOPCCA, and Self-Help International.

One of the active interventions in the community is Self-Help’s Teen Girls Club which was introduced in 2017. The club is focused on young girls, and its main purpose is to help teen girls achieve academic success and go on to senior high school. The club also teaches skills for girls to support themselves and lessons in self-esteem.

Nkontomire M/A primary school is a government school headed by Headmaster Ernest with about 350 students, 55 percent of which are girls. It lacks adequate reading materials, computers and other learning equipment. The headmaster is an advocate for the school’s development, so he has encouraged his students to join the Teen Girls Club. He has also given Self-Help an opportunity to meet club members for reading practice and other lessons at the school.

When the club began, the girls were challenged in many ways. Nearly all of the club members could neither read nor construct simple sentences as a result of the school lacking reading materials to teach properly. Also, girls’ enrollment was decreasing because most of the girls lacked information on what to do during menstruation. During their periods, some did not go to school at all while others sought permission to go home. Personal hygiene was another issue the girls faced. They had low self-esteem and confidence. Most of them were too shy to ask questions during meetings or in class.

Despite the challenges that could have hindered the girls, they understood what the Teen Girls Club was about and were committed from the start. As part of the program, Self-Help provided the school with standard reading materials to enhance the girls’ reading and writing skills. Life support skills and other training, such as self-esteem, goal setting, personal hygiene, reproductive health, etc. were added with the hope that these lessons would change their lives. They developed the habit of reading and started making progress in class. This encouraged the headmaster and three other teachers from the school to volunteer to teach the girls after school hours.

Now, the ‘old’ girls are gone and a great change is here. Almost all of the girls are able to read and write. They understand their menstrual cycle and do not miss school during it. Participants have higher self-esteem and confidence, and nonmembers are feeling inspired to join the group.

The headmaster expressed his profound gratitude to Self-Help, noting that the intervention has indeed created more awareness of girls’ issues at the school, increased girls’ enrollment, provided reading materials for the school, and created structure and discipline for the girls. Everyone at the school involved with the Teen Girls Club program would like to convey their appreciation for the great impact and support. 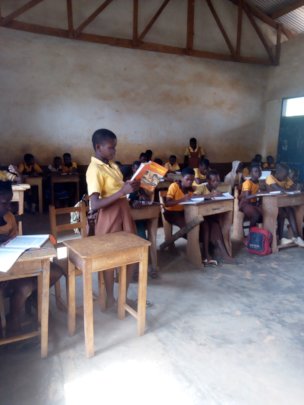 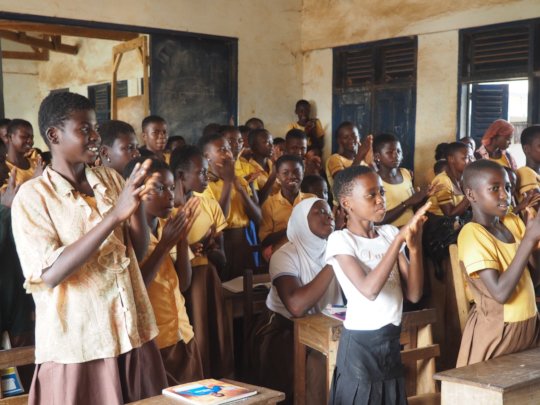 Felicia Takes Any Opportunity to Expand as an Entrepreneur 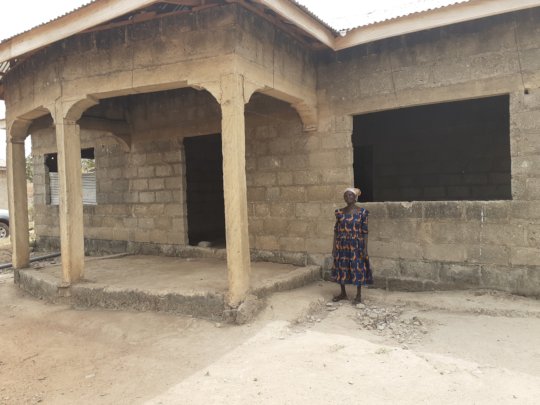 Felicia in front of her new home.

“This organization is a wealth creation organization. When you become part of it, whatever you touch prospers and your children become well-off. Even the people around you flourish. It’s just contagious and very holistic!” - Self-Help Micro-Credit Program beneficiary, Felicia.

63-year-old Felicia is a resident of Bedaabour in the Ashanti region of Ghana. She is a mother of five and a farmer. Felicia has been with the Self-Help International Micro-Credit Program for the past ten years. Felicia missed learning about the program during its first visit to Bedaabour, and mutual friends briefed her afterward about the introductory meeting.

“My response when I learned about the micro-credit program was an outright, ‘No, no way!’” Felicia said. “I even tried to discourage the women who had signed up, but Maame Kokroko [the woman who brought Self-Help Ghana staff to the community] said we should just try to take out a loan once. If it didn’t work, we would quit; so, I reluctantly joined, and my start up loan was 200 GHS (approx. $37 USD).”

Felicia invested her first loan into her farming. This investment enabled her to access more farming land, which helped her increase her crop yields. She was able to use her increased income for her family, and three of Felicia’s children were able to enroll in the senior high school two years after she joined the micro-credit program.

”Previously, it was very difficult for my husband and me to take care of three boys at a time. Thanks to the loan I was receiving on a regular basis, we were able to support them through their education,” Felicia said. “They all want to be police officers; one has already gained admission into the Police Academy. The remaining two are also hopeful.”

In 2015, Self-Help trained the women in Bedaabour in soap making as a part of enterprise development.

“I needed extra income for my family, so I paid attention during the training. Self-Help helped set me up when I decided to take on the challenge of soap making. The business flourished so much that people from the neighboring communities came to buy from me on a wholesale and retail basis,” Felicia said.

“In 2016, business was doing really well and more people were purchasing my soap. My husband and I decided to acquire a plot of land in Sepaase, a suburb of Abuakwa near the city of Kumasi. We want to move the family from Bedaabour to the city in the future, so we bought land closer to the city.

“We have been able to put up an eight-bedroom house. Even though only three of the rooms are totally complete for living, it has been roofed entirely. Hopefully, by the end of 2020, the entire building will be ready for our family,” Felicia said.

Now, Felicia takes loans of 3,000 GHS (approx. $550 USD), which she reinvests in her soap making and farming businesses. She has also introduced the micro-credit program to other people, including her two sisters and their three daughters in a different community where Self-Help Ghana operates.

“I can handle large sums of money because Self-Help has taught me how to save and not mishandle my money. I have introduced two of my younger sisters and their daughters, and now they are better off than before,” Felicia said. “One of them has even bought a piece of land in the city of Kumasi. She hasn’t started building yet, but I know she will build along the way.”

“I would have never forgiven myself if I had let the opportunity to join the micro-credit program pass by me. What I like most about this program is that, if you are diligent in the loan repayment, it is assured that the amount loan will be increased in the next disbursement,” Felicia said.

“I also like that, if I use the money for the reason I took the loan, Self-Help’s staff will help me if I have an emergency or fall on hard times and need flexibility with my loan repayment,” Felicia said.

“Self-Help has helped us women feed and take care of our families. It has given us hope, and I feel empowered,” Felicia said. “I hope Self-Help can reach more women like me and give them something to live for - like Self-Help has done for me. The other women and I are forever grateful.”

Love to support Self-Help International? Then make sure to participate in the 2020 Girl Fund from Mar. 6-13 and vote for Self-Help's Teen Girls Club with a $10 donation! Terms, conditions, and details can be found here, and keep your eye out for more information next week! 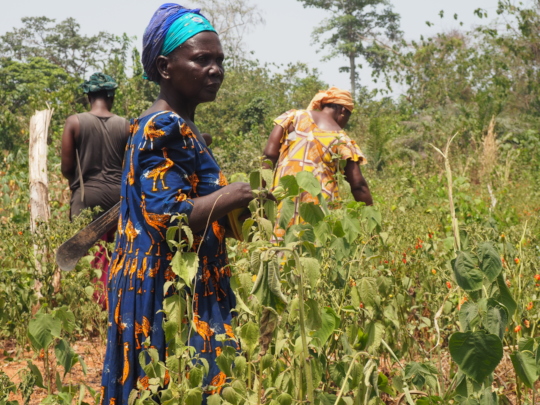 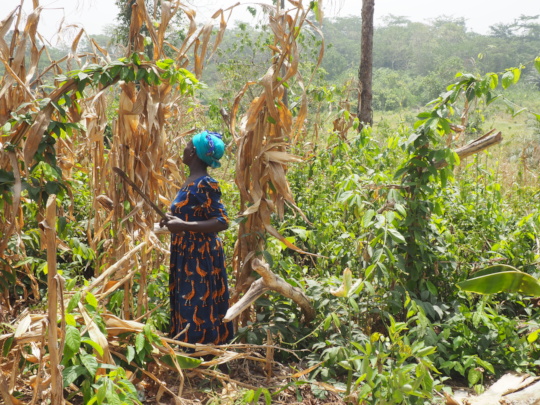 Alima Sees How Nutrition Has an Impact Today, Tomorrow, and in the Future 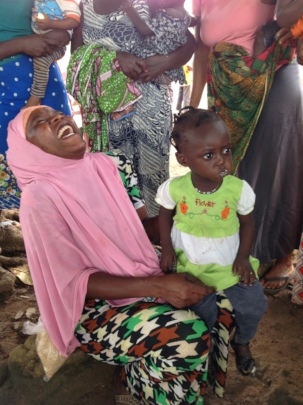 Alima and her child.

Nutrition plays a key role in the development of individuals, families, communities, and the nation of Ghana as a whole. The United Nations’ second Sustainable Development Goal calls for the total elimination of hunger and all forms of malnutrition across all ages. Poverty has rendered a great number of people food insecure, which has caused inadequate dietary intake, diseases, and malnutrition.

Alima feels that Self-Help’s GHFGHC program has benefited her entire family. Alima is not a resident of the village of Kukubuso where Self-Help has a GHFGHC group, but she attends the mosque in the community every Friday. In 2019, she was one of the women who enrolled in the GHFGHC program in Kukubuso. Although she has to walk over 5 km (over 3 mi) to Kukubuso on Tuesdays to attend the meetings, the distance does not prevent her from attending.

According to Alima, she is motivated to come to the meeting because of the counseling and the food supplements she receives weekly. She said that she and her husband could not afford to give her child eggs, so she sees the program as a means to ensure that her children have access to good nutrition.

“The supplement I receive from Self-Help is able to provide breakfast for my family every two days,” Alima said. “My involvement with Self-Help has helped me learn how to provide a nutritional weaning diet for my child using locally available foods, and I’m able to prepare them for my family. This has really eased the burden of providing food for the family in the morning and has also helped improve our standard of living.”

Good nutrition is an important part of living a healthy life, and food choices impact people’s health and how they feel today, tomorrow, and long into the future.

“With the help of Self-Help, my family is able to get adequate nutrients in our diet,” Alima said.

Alima shared that every aspect of her life has seen a positive change as a result from the nutrition education she is getting from Self-Help’s nutrition staff. Alima is one of the mothers who is able to provide helpful answers to questions asked during nutrition counseling sessions - an indication that she has learned something from her time with the program.

Alima has moved from thinking that every food is merely food to adopting a more conscious thought process for selecting what she feeds herself and her family. Alima gratefully thanked Self-Help for helping her family and her enjoy good, nutritious meals.

Love to support Self-Help International? Then make sure to participate in the 2020 Girl Fund from Mar. 6-13 and vote for Self-Help's Teen Girls Club with a $10 donation! Terms, conditions, and details can be found here, and keep your eye out for more information in the next couple of weeks! 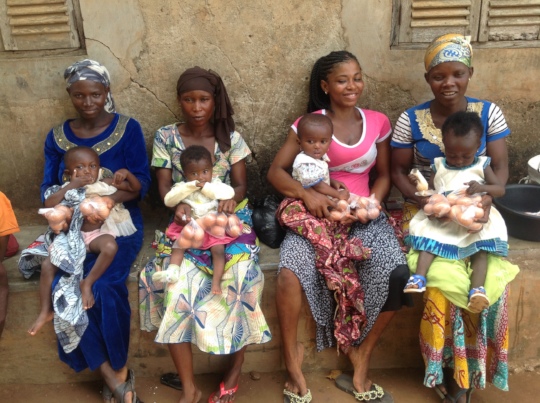 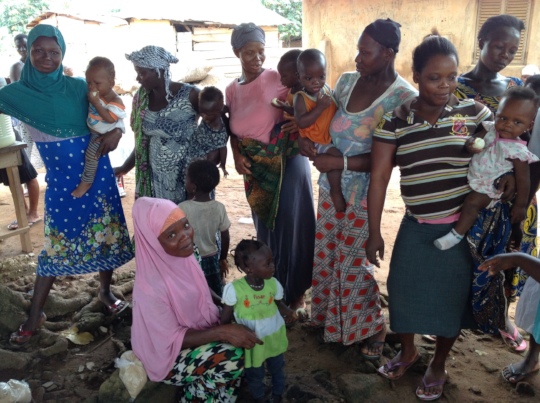 Alima & other mothers in Kukubuso GHFGHC program.
‹ 1 ... 5 6 7 8 9 10 11 12 ... 93 ›
WARNING: Javascript is currently disabled or is not available in your browser. GlobalGiving makes extensive use of Javascript and will not function properly with Javascript disabled. Please enable Javascript and refresh this page.