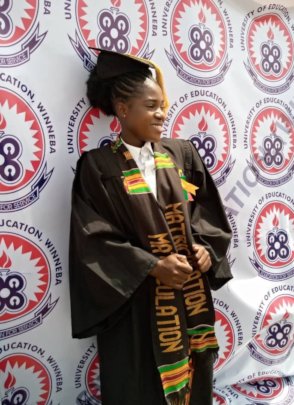 In 2021, Najaahat became the first girl from Bedabour, Ghana to be admitted into university.

Najaahat was one of the first Teen Girls Club members when the club was founded in Bedabour in 2016. After completing Junior High School, she went on to attend Islamic Senior High School in nearby Kumasi. In early 2021, Najaahat was admitted into Teacher Training College to study education, becoming the first girl from her community to go to college.

In September 2020, Najaahat gave a speech during the Junior High School graduation in Bedabour, which you can watch on YouTube by clicking the link below. In her speech, Najaahat is encouraging girls to get involved with the Teen Girls Club.

"If you educate a woman, you educate a nation," Najaahat says in her speech. "Can you imagine the number of nations that have emerged out of the Teen Girls Clubs...how many are still emerging?"

The Graduate Entrepreneurship Program is Undergoing Some Changes 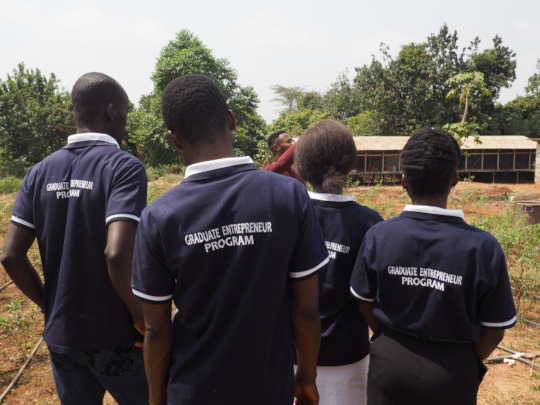 This project is undergoing some programming changes during 2021-2022. For that reason, fundraising for this project is being discontinued. Any recurring gifts to this project will be directed to its sister project, "Take Best Practices to Farmers in Rural Ghana," which supports the Agriculture and Entrepreneurship Development (AED) program in Ghana. If you would like to still support agriculture in Ghana, we encourage you to make a gift to the AED program! We will keep you updated when we know the future of the GEP program.

The following report focuses on what prior GEP cohort members are doing as of early 2021.

Justice joined the Graduate Entrepreneur Program (GEP) with a project focused on cultivating maize and vegetables and an additional interest in raising rabbits. His team was very successful with their project and made a significant profit from the projects they implemented. After completing their GEP project, Justice started a business venture in vegetable production, rabbitry, and poultry. Eager to continue fostering engagement in the agriculture sector, Justice accepted a part-time job with the Kumasi Institute for Tropical Agriculture, his alma mater, as a project manager to help other students learn about agriculture.

Justice now works with Self-Help International as a Community Livestock and Crop Specialist. He is a valuable addition to the Self-Help team, and his hands on knowledge of agriculture is a valuable asset in our partner communities. Ever the entrepreneur, Justice keeps 100 birds and 10 rabbits at his own home for additional income.

Dennis completed the GEP with projects in maize, vegetable, and rabbit production. After completing the program with Self-Help, Dennis ventured into maize cultivation in Adansi Fomena in the Ashanti Region. Dennis encountered some challenges in his first season, so he applied to other organizations for additional training & support.

Dennis applied and was accepted to a Ghana/Israel greenhouse agriculture training program; but, due to COVID-19, he was unable to travel to Israel to participate in the program. Unsure of what the future would hold, he went into poultry production. Dennis started raising egg-laying poultry by beginning with 700 birds. After his first three weeks, he had only recorded three mortalities, putting him on track to make a profit. In addition to his poultry business, Dennis works as a Project Coordinator for VIS Ghana, an NGO into greenhouse agriculture and other social interventions like nutrition and women's empowerment.

Isaac joined the 2019-2020 GEP cohort with a focus on pepper production. He started his production in the minor season and, through the support of Self-Help’s Ag Extension team, success became his hallmark. He planned to produce pepper powder but later decided to sell the dried pepper before grinding it. Isaac made a profit at the end of the project. After the program, Isaac entered into a business partnership to cultivate five acres of land in the eastern region of Ghana. He is into vegetable production, and he has hired five part-time workers to assist him on his farm.

Eva was also part of the 2019-2020 GEP cohort. She joined the program to learn and try poultry production. Because of her extensive knowledge in poultry production, Eva was linked to a poultry farmer in the Ashanti Region to provide extension services. Eva's performance at the farm was so excellent that the farm’s owner recruited her to be the farm’s manager during her time with the GEP program.

The knowledge Eva gained during this time informed her decision to establish a farm in the Upper East region of Ghana. She now has 450 layers and has recruited two people to support her farm. Her production rate is 76.45% as of March 2021.

Richmond served as a team lead for the four-member VCJR team in his GEP cohort. Their project was maize and mushroom production. Richmond led the team to success. He worked to ensure that the team had a positive cashflow. In his spare time, Richmond rented a two-acre piece of land near the Self-Help Agriculture Training Center to start a private maize farm. He was successful, and he used his profit to purchase three piglets to starta pork business in the Western Region.

Richmond applied for a job with Agri-Impact as a greenhouse supervisor. Through the knowledge he gained from the Training Center and the Self-Help team, Richmond passed the interview. Richmond was linked to an investor through Agri-Impact, and he is making a lot of progress. He was given a target to produce 8 tons of tomatoes within four months. Richmond's second harvest fetched him 4 tons and the plant is yet to reach its peak stage at the time of this report.

Juliana was also a member of the VCJR project. Julie was the master of marketing the mushroom that the team produced. She contributed a lot, especially in the area of mushroom production. Juliana also applied to be part of Agri-Impact, but she was not successful in securing a spot. Currently, Juliana is undergoing another training in greenhouse technology with Agritop, a Government of Ghana and Israeli Government initiative to train young agripreneurs.

Thank you for your support that made these success stories possible! We are excited for what the future holds! 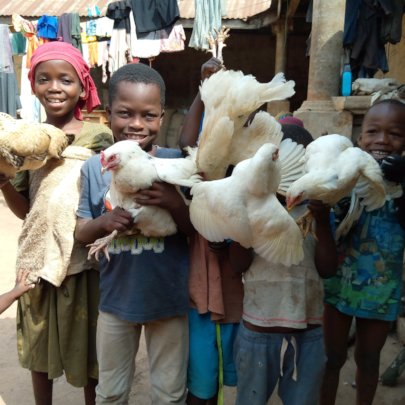 Rural poultry production is recognized as an important agricultural activity in many countries. Poultry is generally owned and managed by women and children, and the major source of animal protein in a rural family’s diet is poultry. Traditionally, the weight of village chickens and their egg output are low. Both of these things can be improved with factors like housing, disease control, management, and supplementary feeding.

Self-Help International estimates that over 90% of rural households in Self-Help’s partner communities in Ghana own poultry.  Accessing veterinary services for poultry in these communities is a challenge in Ghana, and this causes them to lose their birds, especially during a disease outbreak.

One of the outbreaks that causes high poultry mortalities in Self-Help’s partner communities is the annual Newcastle disease. The Ghana Ministry of Food and Agriculture (MOFA) states that this disease kills more than 90% of unvaccinated birds during outbreaks between December and February.

Around November 2020, women that owned birds in some of Self-Help’s partner communities expressed concern about how they had lost almost all of their birds during previous years. Self-Help’s Agriculture Extension team did due diligence data collection in five partner communities to confirm the issue the women raised. From the data, Self-Help realized these communities lose over 5,000 birds annually. For sustainability reasons, the team also involved the Department of Agriculture and the Veterinary in dealing with this challenge.

In March 2021 during a follow-up on bird's response to the vaccines, the communities were thankful to Self-Help and the community poultry vaccination because they saw a great drop in bird mortality in 2021.  This development will improve poultry output and household nutrition in these communities. 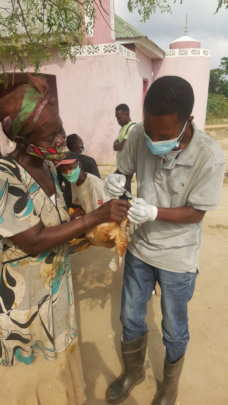 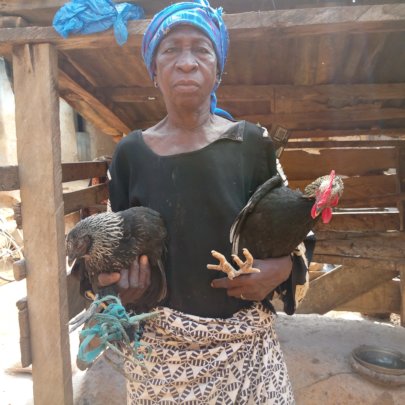 Household poultry.
‹ 1 ... 3 4 5 6 7 8 9 10 ... 105 ›
WARNING: Javascript is currently disabled or is not available in your browser. GlobalGiving makes extensive use of Javascript and will not function properly with Javascript disabled. Please enable Javascript and refresh this page.