Getting young people involved in ag!

GlobalGiving is matching gifts up to $50 by 50%! Make a gift to your favorite Self-Help project between now and the end of Friday, Sept. 17 and GlobalGiving will match the first $50 at 50%. Full terms and conditions here.

In Self-Help International’s partner communities in Ghana, it is common to see children helping their parents on the farm during the weekend and after school. The produce grown on these farms serve as the major source of food for families and provide an income at the local market. One major challenge faced by farming families has been low yields, which has sometimes been caused by not being able to implement good agricultural and environmental practices.

Getting rural farmers to adopt new agricultural practices is one of the major challenges the agricultural sector currently faces. It is difficult for rural farmers to access new or best-practice information, so they do not always know that modified practices could positively impact their crop yields. Their children grow up and either migrate to the cities or take over the farming business, continuing to use the farming practices they learned from their parents.

Equipping rural children with science-based agricultural and environmental practices plays a vital role in improving the quality of agriculture in these communities because they are directly involved in the agricultural activities on their families’ farms from a very young age.

To teach children about agriculture, Self-Help introduced the Youth in Agriculture Program in 2018 through the Agriculture and Entrepreneur Program. Currently, eight schools are enrolled in the program, and membership is composed of students from upper primary schools and junior high schools. The eight schools are located in rural communities in the Ashanti Region where Self-Help operates: Nkontomire, Nyamebekyere, Kyereyase, Timeabu, Bedabour, Beposo, Nkawkom and Kukuboso.

Through the program, the students in these communities are equipped with resources, knowledge in good agricultural practices, and entrepreneurship skills training. Emphasis is placed on hands-on and experiential learning methods. Each club identifies and implements a field project throughout the school year to practice what they are learning and to generate an income to sustain the club.  Lessons learned during the club activities and field visits are carried on to their parents’ farms and their communities. Some of the students have even started their own individual projects at home with support from Self-Help and their club advisors.

Self-Help’s team knows that the future of Ghana depends on the quality of agriculture and by engaging young people in learning about agriculture, Self-Help hopes to improve family nutrition and local community markets. 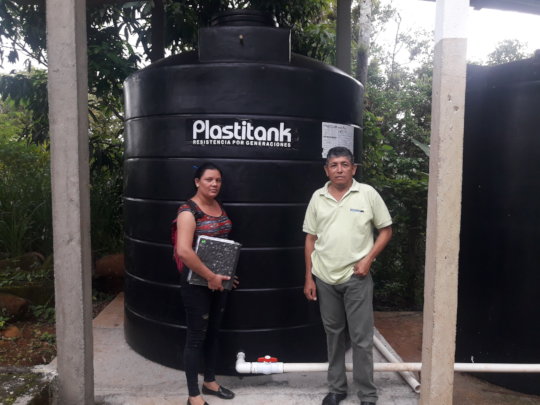 Geovany and Arlen in front of the water system.

Nueva Guinea is one of nine municipalities served by Self-Help International’s Clean Water Program in Nicaragua. In this area, 27 rural communities have had chlorinators installed in their water systems. In one of these communities, Los Angeles, there are 1,130 residents and water is distributed through a pipe network to 210 homes.

As of 2021, the Los Angeles CAPS is led by five directors, but three of them haven’t been actively participating. The remaining two, President Geovany and Treasurer Arlen (who has also assumed the secretarial responsibilities), have worked very hard to administer and ensure the sustainability of the Los Angeles water system. Geovany has also taken on putting chlorine into the chlorinator, monitoring the chlorine, and doing all CAPS-related errands on his motorcycle .

In June 2021, Self-Help staff went to Los Angeles to talk with Geovany and Arlen and learn about the work they are doing as CAPS leaders and the sustainability of the water system. This is what the leadership shared:

“We have been leaders in the CAPS since October 2017. By October 2021, we will have served four years, which is two terms - we were re-elected by the community after our first term for administering the CAPS well.

“In each training, we received explanations on how to apply what we learned, and we were supplied with manuals on the chlorinating system so that we could study and strengthen our knowledge.

“The training sessions have helped us to improve the administration of the CAPS and to assess a water rate that is both affordable for our community members and allows us to cover expenses. This ensures the maintenance and sustainability of the water system that we have.

“Each month we spend between C $ 735 to C $ 1,000 in order to purchase between seven to ten chlorine tablets. This makes sure that our water stays chlorinated so that community members have safe drinking water.

“We charge for water services on the first day of each month and charge again after eight days. Anyone who doesn’t pay after the second charge falls into default and is given up to two months to pay the balance. If, at this time, the user doesn’t pay, water service is cut off. At present we have a 15% payment delinquency.

“During the period that we have been managing, our CAPS has pooled its own funds together to make  investments in our community’s water system. The chart below details what we have done.

"We also have monthly expenses due to the operation and maintenance of the water system, which you can see in the second chart below.

“We have an average monthly income of C $ 12,000 and a monthly disposable fund of C $ 5,000 after all of the expenses for maintaining the aqueduct. Since assuming our leadership roles three and a half years ago, our CAPS has accumulated C $ 155,488 cordobas, which is in the bank. We have been able to save that amount thanks to the rate we charge for water, which we learned from all of the training and support Self-Help has provided.” 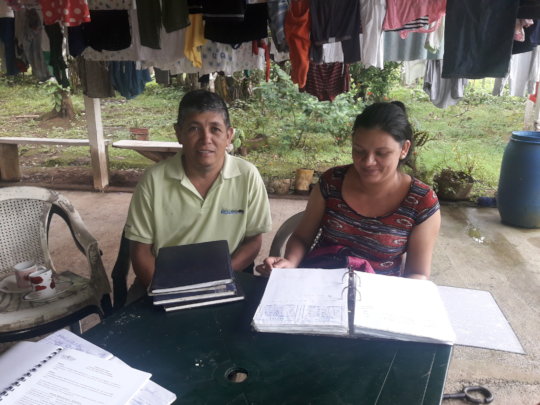 Mabel Bounces Back from COVID-19 Challenges 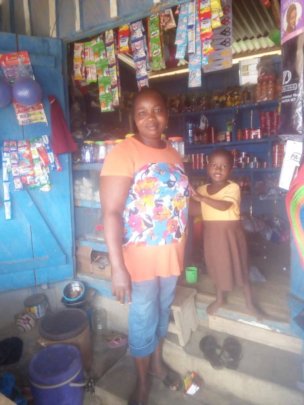 Mabel and her daughter in her shop.

In 2012, Mabel joined the microcredit program in Timeabu, a small farming community in the Ashanti Region of Ghana. As a single mother, the loans Mabel has received have helped her enroll all five of her children in school. She has also been able to expand the shop she owns in the community, and she has been able to build a new home for her and her family.

Over the years, Mabel has distinguished herself as a sort of catalyst in the community: nothing good or important happens in Timeabu without Mabel’s involvement. Self-Help International staff refer to her as the, “Chief of Timeabu.”

In the midst of the COVID-19 pandemic, Mabel almost went bankrupt because fewer people purchased things from her shop. Many people preferred to stay at home to maintain physical distancing or were using the resources they already had available. In addition to losing her shop income, Mabel wasn’t able to earn money as a cook for the government’s school feeding program in her community because the schools were closed for most of the year.

In order to provide for her family, Mabel chose to use some of the few remaining items in her shop instead of buying from others or outside the community. When Self-Help staff visited her shop in March 2020, they found it virtually empty. She came to Self-Help again for help to restart her business in June 2020.

“I had hit rock bottom and looking at things then, recovering from my losses felt almost impossible; but I wasn’t willing to let this pandemic clamp me down like this,” Mabel said. “I wanted to fight back, and Self-Help was there with me through that fight.”

“Self-Help assisted me in restarting [my business], even though I still owed them from my previous loan,” Mabel continued. “I identified the commodities the community needed most and invested the loan there. In no time, I was recovering faster than I thought was possible. I made gains within a short period of time.”

When Self-Help visited Mabel in June 2021, she had started building a store with two shops, the very first of its kind in Timeabu.

“I hope to finish this building by the end of the year so that I can move my shop there for 2022,” Mabel said.

Mabel is not only a partner in the microcredit program - she is also a Community Coordinator for the Teen Girls Club in Timeabu. She is a strong advocate and mentor for TGC participants.

“I am very happy to be a coordinator. I don’t only facilitate the girls’ club; I also learn a lot. For example, when the girls are having their reading classes, I sit in with them,” Mabel said. “Through those lessons, my English is improving, I am able to form and also understand simple sentences, something I thought I would never know how to do.”

“I have been to have so many new experiences as a club coordinator - the list is never-ending,” Mabel added.

“I have felt so empowered since partnering with Self-Help. I am consulted whenever the chief is seeking any form of community development- whether from the government, NGOs, or individuals. I like the life I am living.” 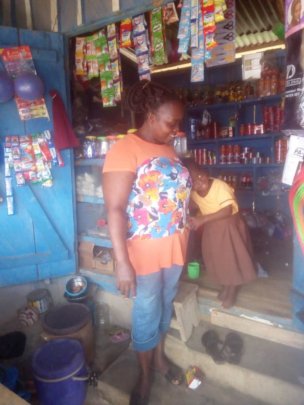 Mabel is able to keep providing for her family!
1 2 3 4 5 6 7 8 9 ... 104 ›
WARNING: Javascript is currently disabled or is not available in your browser. GlobalGiving makes extensive use of Javascript and will not function properly with Javascript disabled. Please enable Javascript and refresh this page.