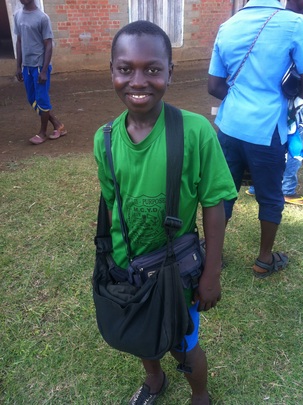 So excited to participate in end of year games!

School’s our for summer…

But what our kids learned in CFDP programs during the last few months will stay with them forever. Thanks to your donation to our project on Global Giving, we successfully completed our third year programs for boys and girls in Kumba. With your support, CFDP clubs operated effectively in 11 schools, 2 sporting academies, 1 neighborhood, and 1 village. In each of these communities, 20 to 30 students gathered each week to learn and play with volunteer leaders who served as educators, role models, mentors, and most of all: FRIENDS.

Every CFDP session includes ice breakers, warm ups, soccer drills, a small group discussion, an activity or game, and a small scrimmage. CFDP has seized this opportunity to transform the unique atmosphere which encompasses soccer fields in Meme Division, South West, Cameroon into a safe learning environment by infusing soccer drills and games with educational discussions and activities. Every week from January through April, boys and girls gathered in their respective areas with a volunteer leader, be it a teacher or a coach, to learn and play in the CFDP session.

This past semester we focused on topics such as adolescence, reproductive health, HIV prevention, and gender equity. Before students go home from every session, they collectively agree on a “take home message” and how they might apply whatever was discussed in the session in their everyday lives.

CFDP partnered with 15 institutions to successfully reach nearly 400 kids each week. Girls made up more than 30 percent of registered participants. Sessions were held with each club on various days of the week.

Government Bilingual High School, a site with some of the most girls involved, ran on Friday afternoons and was led by CFDP staff Caroline, who has been working with the organization since Day 1.

Other leaders who participated in training sessions in the summer of 2012 continued to run educational programs in their respective communities thanks to your encouragement via GlobalGiving.

On May 15th, more than 100 youth – 26 girls and 79 boys, precisely – came together representing 11 of our 15 partner institutions in a friendly competition to see who would come out on top for the 2012-2013 school year. The teams, most of which had 10 representatives from their CFDP clubs, moved around 13 stations which combined an activity or game of skill with an educational topic previously covered in a session this semester.*See links below* The groups were scored on their ability to successfully complete the activities and respond to questions.

Mile One Community won First Place in the Sporting Component

All members of first place teams were awarded jerseys and soccer shoes (WOW!) donated by friends in the USA. Teams who placed in second, third, and fourth were also awarded prizes in the form of soccer equipment.

NOTHING LIKE THIS HAS EVER BEEN DONE IN KUMBA! WITH YOUR HELP, WE ACHIEVED SOMETHING GREAT THIS YEAR!

A whole new bunch of institutions have already submited requests for partnership next year. We look forward to building upon the great success of this year and expanding in our fourth year of after school programs. Until then, please check our website to see what other exciting activities we have planned for the summer! Thank you! 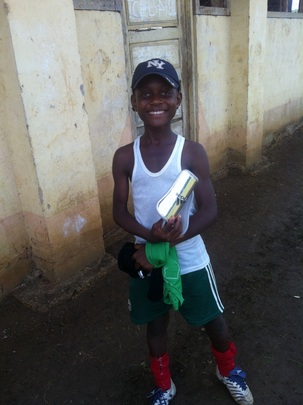 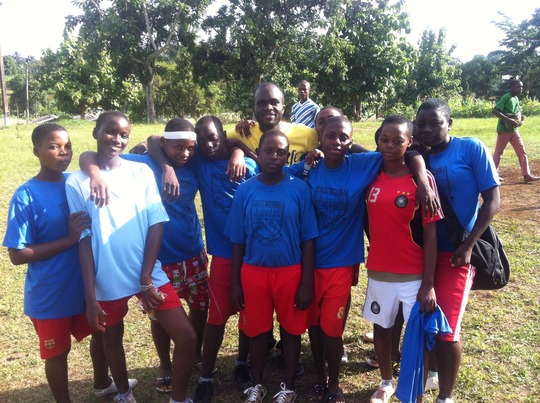 Martin stands with his team from Presby HS

First Official Update on Your Impact in Cameroon! 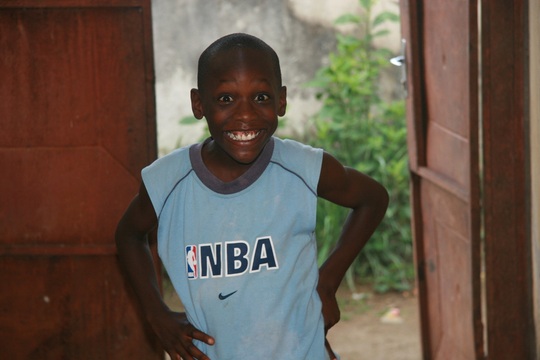 Jaden is all SMILES on Games Day. Need MLS shirt!

You are inspiring hope and creating change in Kumba as supporters of Cameroon Football Development Program. We understand change takes time and it’s not always easy to see. However, the impact you help create in the lives of boys and girls in K-town can be seen. The impact is the smiles on our youth’s faces after successfully completing that one soccer drill that seemed impossible. The impact is when the light bulb goes on during a discussion about protecting oneself from negative influence of peers. The impact is the number of youth who turn out on World AIDS Day, more than 500 students this past December 1st, to play soccer and learn strategies to prevent HIV infection. We collaborated with Global Conscience Initiative, a local human rights organization, and the US Peace Corps to engage youth in a full day of fun educational activities which they will never forget.

Later in December, we hosted our 2nd Annual Games Day to round up the first semester of after school programs. Youth representatives from 10 schools, 2 villages, and 2 neighborhood soccer clubs participated in activities which included fun soccer drills and a rigorous quiz to test what they had learned from the health and educational discussions from the previous months. Diligent Bilingual Academy (DLA) emerged victorious with a total of 89 points of a possible 100.

One participant, Gina, age 14, said of the day “I have never experience anything like this. The CFDP have come to town with something different. I learned so many things to help me in my future. And with my friends, we are stronger because we work together.”

As we look ahead to a bright year in 2013, we find our partnership with the US Peace Corps creating new opportunities already. In early February, CFDP was invited to appear on Cameroon Radio Television (CRTV), the national broadcast network, to discuss how volunteerism can combat poverty and improve the situation for youth in Cameroon.

The second semester of after-school programs are in full swing thanks to your support within the GlobalGiving community. We are excited to have you on our team as this year is shaping up to be our best ever. Please continue to stay connected with us as we have some exciting months ahead! 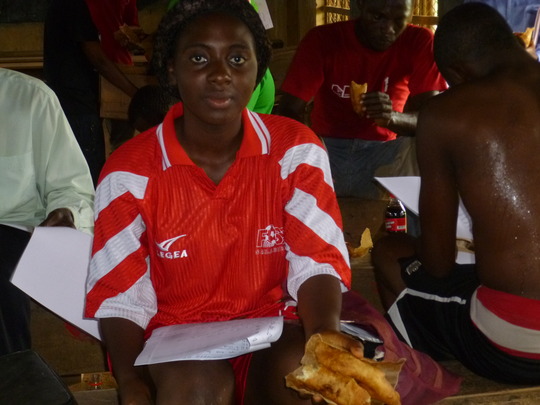 Marie encourages girls to know they can play, too!