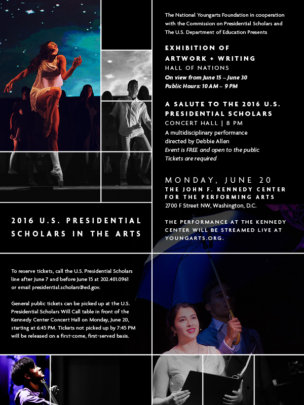 2016 U.S. Presidential Scholars in the Arts

June is an exciting month for the National YoungArts Foundation as it celebrates the 20 U.S. Presidential Scholars, welcomes its new President and CEO, and looks back on two successful regional programs in March and April.

“This year’s class of Presidential Scholars continues a more than 50 year trend of honoring students who have shown excellence in their educational, artistic and civic pursuits,” said U.S. Secretary of Education John King. “Thirty years ago, the program was expanded to include students in the arts, which is critical to providing students with a well-rounded education.” The National YoungArts Foundation, in cooperation with the Commission on Presidential Scholars and The U.S. Department of Education will present an exhibition of scholars’ artwork and writing, as well as a multidisciplinary performance and salute to the 2016 winners.

On May 2, 2016, the Board of Trustees of the National YoungArts Foundation announced the appointment of Carolina García Jayaram as President and Chief Executive Officer. Ms. García Jayaram comes to YoungArts from United States Artists (USA), one of the nation’s largest grantmaking and advocacy organizations supporting performing, visual, media and literary artists, where she has served as President and Chief Executive Officer since 2014. Among her other achievements at USA, Carolina oversaw the formation of a new Fellows Alumni Advisory Council, the establishment of new partnerships with leading national organizations and festivals and the production of USA’s annual two-day convening, the Artists Assembly.

Ms. García Jayaram said, “The establishment of the campus in Miami, the expansion of the program’s outreach into other cities, the involvement of magnificent artists as advisors and role models—all this and more has made YoungArts the organization to watch. I’m extremely proud to have been chosen to advance YoungArts in realizing its indispensable mission.”

The National YoungArts Foundation’s 2016 YoungArts Miami program (March 8 to 13) and YoungArts New York program (April 12 to 17) offered YoungArts Winners, selected from a record 12,000 applications from emerging artists ages 15-18 (or in grades 10-12), the rare opportunity to learn, connect and collaborate with fellow peers and luminaries in their artistic fields. During YoungArts Miami, participants worked with renowned artists including director, producer and creator of “The Technique” Joan Scheckel, YoungArts alumni Yara Travieso (2005 Winner in Dance) and Jen Waldman (1993 Winner in Theater), who offered them support, mentorship and encouragement to pursue their passions and careers in the arts. These promising young artists also had the chance to share their talents with the public through multidisciplinary performances, writers’ readings, a cinematic arts screening and a visual arts exhibition on the YoungArts Campus and at The Colony Theatre on Lincoln Road. 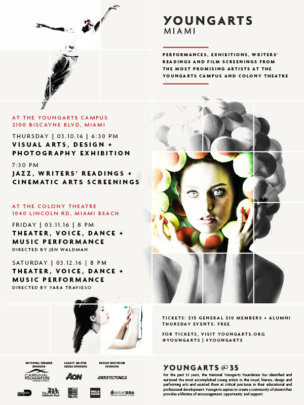 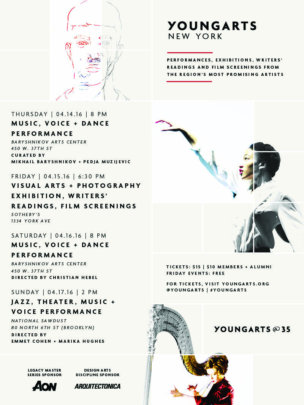 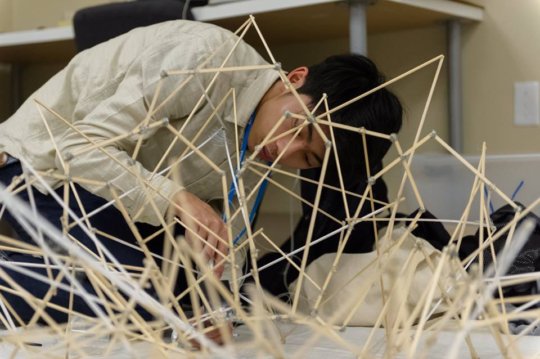 For 35 years, YoungArts has been offering emerging artists the support and encouragement they need to follow their dreams of becoming professional artists. During this time, we have developed a strong alumni network of more than 20,000 artists, many of whom value the encouragement they received at a young age so much so that they are now paying it forward as YoungArts master teachers,” stated Lisa Leone, Vice President of Artistic Programs for YoungArts.

National YoungArts Week culminated with the organization’s largest annual fundraiser, the YoungArts Backyard Ball, which was emceed by Tony and Grammy Award-winning actor, singer and director, YoungArts Alumnus Billy Porter (1987 Winner in Theater). During the event, YoungArts honored director and actress Rosie Perez and director Robert Wilson with the Arison Award, as well as performer, Tony Award nominee, YoungArts Master Teacher and 1997 YoungArts Winner in Theater Tony Yazbeck with the Arison Alumni Award, for their outstanding contributions and indelible impact on the arts.

To reach out to more students, YoungArts also offers regional programs in Miami, New York, and Los Angeles, which are modeled after National YoungArts Week. Each regional program engages YoungArts Winners from all award levels—Finalist, Honorable Mention and Merit—and exposes local audiences to emerging artists in their community.

The YoungArts Miami and YoungArts New York Regional Programs are still to come, and will be highlighted in our next report. For more information on our current and upcoming programs, visit www.youngarts.org. Thank you for your support! 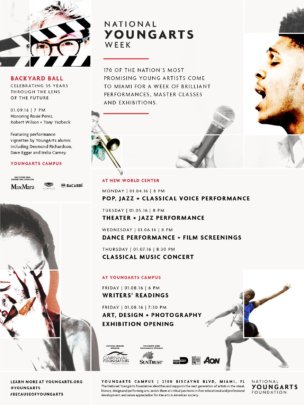 819 Students from 42 States Recognized for Excellence in the Literary, Visual, Design and Performing Arts

MIAMI, FL (November 19, 2015) – The National YoungArts Foundation (YoungArts) today announced its 2016 YoungArts Winners. From more than 12,000 applications—the largest number to date—819 young artists from 42 states have been selected for their outstanding work and accomplishments across the literary, visual, design and performing arts. Winners receive cash awards of up to $10,000, validation by renowned mentors, opportunities to participate in YoungArts programs, a strong professional network, and guidance in taking important steps toward achieving their goals. A complete list of the 2016 Winners is available online at http://youngarts.org/winners.

Each YoungArts Winner is designated as a Finalist, Honorable Mention or Merit Winner through a blind adjudication process by an independent panel of highly accomplished artists. Some Winners are awarded for excellence in multiple disciplines. 2016 Finalists have the opportunity to participate in the 35th annual National YoungArts Week in Miami from January 3 to 10, 2016, and all Winners are eligible to participate in YoungArts’ regional programs, including YoungArts Los Angeles (February 16 – 21, 2016), YoungArts Miami (March 8 – 13, 2016), and YoungArts New York (April 12 – 17, 2016), space permitting.

“On behalf of everyone at YoungArts, I want to congratulate all of our Winners and look forward to welcoming the Finalists to our campus in January,” stated Lisa Leone, Vice President of Artistic Programs for YoungArts. “As we kick off our 35th anniversary, we’re thrilled to see that YoungArts is continuing to grow and develop into a remarkable and vibrant community of more than 20,000 artists who are making contributions to the art world today. I am excited to see how this year’s winners thrive as they participate in our transformative programs.”

Of the 819 Winners, approximately 165 Finalists from around the country will come together for National YoungArts Week, which aims to foster cross-disciplinary collaboration and community while offering the guidance needed to prepare for the next stage of their careers. During the weeklong intensive, participants across 10 disciplines take master classes and workshops with internationally renowned leaders in their field, including MacArthur Genius Tarell McCraney (1999 Winner in Theater), Hip Hop feminist writer Joan Morgan, The Royal Ballet of London’s Sarah Lamb (1998 Winner in Dance and U.S. Presidential Scholar in the Arts), celebrated contemporary visual artist Jose Parla, and Academy Award winning filmmaker Doug Blush (1984 Winner in Cinematic Arts), among others. Throughout the week, their work will be further adjudicated to determine additional award levels, including a monetary award of $1,000 to $10,000. Finalists also share their talents with the public through performances in classical, jazz, voice, dance and theater, as well as film screenings at New World Center; an art, design and photography exhibition in the YoungArts Gallery; and writers’ readings in the YoungArts Jewel Box.

“To have such a formal organization acknowledge you as a young artist, saying that you have talent, was highly motivating for me,” said Terence Blanchard, multiple Grammy Award-winning trumpeter and composer and a 1981 YoungArts Winner in Music, the inaugural class of YoungArts Winners. “I was part of YoungArts when it first started, and the mentoring and scholarships I received definitely took my artistry and career to new heights which may not have been possible otherwise.”

YoungArts supports its alumni by providing opportunities to participate in the organization’s programming nationwide, including its annual YoungArts Awareness Day, a national advocacy campaign that promotes the arts as a rewarding and viable career path. The organization also seeks to support the artistry of its alumni and their projects throughout their careers; builds a community of YoungArts winners across generations; and establishes connections with partner institutions across the country, including the John F. Kennedy Center for the Performing Arts, American Ballet Theater and the Metropolitan Museum of Art. 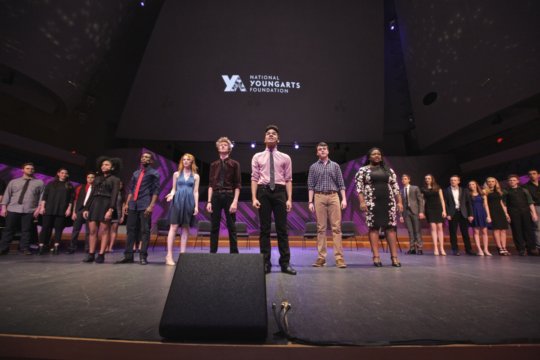 2015 YoungArts Theater Performance
Attachments:
‹ 1 ... 3 4 5 6 7 8 9 10 ... 15 ›
WARNING: Javascript is currently disabled or is not available in your browser. GlobalGiving makes extensive use of Javascript and will not function properly with Javascript disabled. Please enable Javascript and refresh this page.