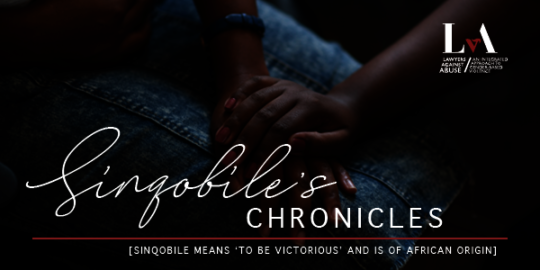 Andiswa’s story began in early 2019 when she was just seven years old.

Statistics reveal that South Africa has some of the highest cases of GBV in the world, including high prevalence rates of violence against children. Most often, the perpetrators are known to the victims. In the case of Andiswa*, her story began in early 2019 when she was just seven years old. She and a friend were walking home from the public swimming pool when a man known to their family asked them to come over to him. Andiswa recalls that they refused, and that he ran after them into a secluded area where he raped both girls. The children immediately told their families of what happened to them and they reported it to the local police. The perpetrator was arrested shortly thereafter and Andiswa was referred to LvA by the Court Preparation Officer with whom LvA has a strong relationship.

During the initial consultation, Andiswa’s mother was resolute in her determination that the perpetrator be held to account for his actions and that LvA provide her daughter with every type of support available to help her cope with and recover from the trauma endured. LvA knows that this determination and caregiver support are crucial elements in every client’s long journey to justice and recovery.

Over the next two years, LvA’s legal and psychosocial teams worked closely together to provide Andiswa with comprehensive support. Andiswa began receiving individual therapy from LvA’s therapist in 2019 and, in early 2021, also began participating in a group therapy process with other children her age who had also experienced some form of sexual violence.

During her individual therapy sessions, Andiswa shared that she faced several challenges at home which increased her overall vulnerability, such as her mother’s chronic medical condition which resulted in Andiswa often having to care for herself from a young age. As a result, she struggled to express her needs at first because she had become accustomed to being self-reliant. In response, one of the therapy goals was to strengthen her ability to trust that other people would provide the support she needed. Over time, LvA witnessed a positive shift in Andiswa’s ability to trust others for support. For example, Andiswa felt comfortable to share that she and her mother were struggling to adhere to their medical treatment due to ongoing financial and food insecurity. LvA was able to work with health practitioners from a local clinic and social workers from the Department of Social Development to provide Andiswa and her mother with the necessary assistance. Through this process, Andiswa saw that her needs could be met and that she deserves to be safe.

At the same time, LvA’s legal team provided comprehensive support to Andiswa and her family in the criminal case against the perpetrator. Throughout the investigation and pre-trial stage, LvA’s legal officer liaised with the investigating officer and prosecutor assigned to the case and updated Andiswa’s mother on its progress. The trial was scheduled to begin in early 2020 when South Africa was hit with the global COVID-19 pandemic, resulting in ongoing postponements of most criminal cases for the remainder of the year. Despite these postponements, Andiswa and her mother’s commitment to pursuing justice remained strong, largely attributed to their consistency in accessing psychosocial support from LvA.

In late 2020, Andiswa’s case was transferred to another Sexual Offences prosecutor. This required her to complete a second pre-trial consultation with the new male prosecutor. Andiswa remained her energetic and outspoken self during the consultation and even shared her apprehensions with the prosecutor about testifying.

The day finally arrived for Andiswa to testify.

In March 2021, the day finally arrived for Andiswa to testify. While there was some nervousness, she was mentally and emotionally prepared thanks to the tools provided by LvA over the two-year period, and her recognition of court officials with whom she had engaged previously. Her testimony exceeded everyone’s expectations. She was able to articulate her story clearly and respond to the questions from the defence attorney without wavering. After completing her testimony, Andiswa confidently pointed out the man who had raped her and her friend two years ago. She later shared how seeing the perpetrator on the monitor had scared her, but she remembered that she was safe and that he could not get to her. The criminal trial is still proceeding.

LvA celebrates the strength, courage, and resilience that Andiswa has demonstrated over the last two years in her dual pursuits of seeking justice and personal healing. Andiswa was recently awarded with a Certificate of Bravery by the National Prosecuting Authority (NPA) for the completion of her testimony in the criminal case. But perhaps, most importantly, Andiswa shares that she now believes that safety is not a privilege but is a human right which belongs to every child including and especially her. 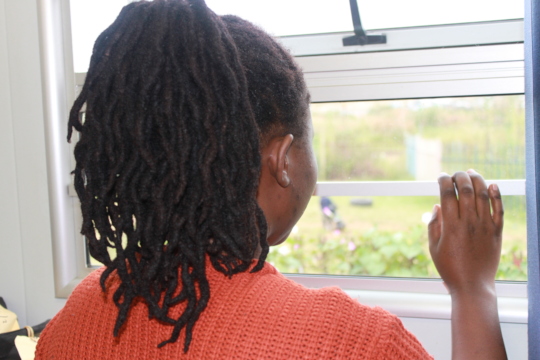 Through our work, we have the privilege of working with some exceptional women. Women who have overcome extraordinary challenges. Women who have acted boldly to stand up against their abusers. Women who have taken steps, both small and large, to improve their lives and the lives of her children. In honour of International Women’s Day, we would like to take a moment to celebrate two of these extraordinary women.

Kuhle* was referred to LvA for counselling in connection with an ongoing abusive relationship.  When she first started meeting with LvA’s social worker, she struggled to express herself during her sessions. However, through these sessions, she became more confident when expressing her feelings and was able to understand and articulate the origins of her trauma. In addition, the client was empowered to leave her abusive partner and thereby, restore a safe environment for herself and her children. By the end of her sessions, the client appeared to be in a positive space and was thriving in her newly secured independence and freedom from her abusive partner.

Sophie* was abused by her boyfriend and would occasionally even have to miss work due to the severity of the abuse. She was referred to LvA for assistance. Sophie began meeting with LvA’s social worker for individual counselling sessions and initially presented feelings of fear, shame and guilt. Through these sessions, LvA’s social worker helped Sophie to understand the nature and impacts of trauma which helped to normalise the reactions and emotions she experienced. This understanding helped Sophie regain a sense of control over her life. Over time, she demonstrated gradual improvements in her mental state including regaining an interest in her work, establishing regular sleeping patterns and implementing healthier coping strategies. At the same time, she decided to stand up against her abuser and secured a protection order against him with the assistance of LvA’s legal team.

Today, we celebrate their courage.

We celebrate their resilience.

We celebrate their strength.

And we are honoured to have played a small part in their story.

Empowering Communities to Stand against GBV 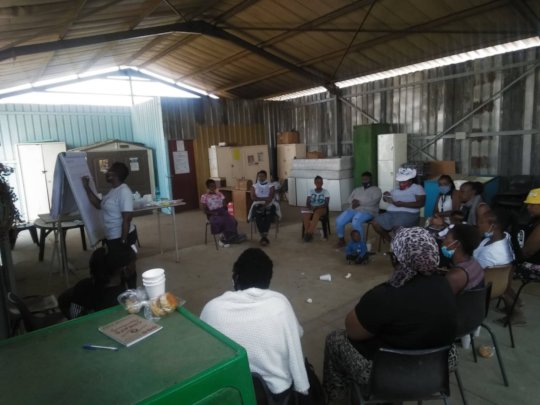 In July 2020, LvA launched a new 12-month project funded by the African Women’s Development Fund (AWDF). The objectives of the project are two-fold: to increase the capacity of young women to understand and challenge the structural drivers of GBV and to shape community attitudes on GBV; and to mobilise community members to take action against GBV.Under the project, LvA is facilitating quarterly workshop series for women aged 18 – 35. These workshops explore concepts of power, patriarchy, misogyny and gender norms and stereotypes and interrogate their respective roles in the perpetration of gender-based violence. They also look at available legal rights and legal remedies in cases of intimate partner violence and/or sexual violence. Lastly, they participate in a reflexive journey where participants are invited to map their lives events, reflecting on key moments and sources of strength (whether internal or external).

Following the completion of these workshop series, graduates are invited to form a Community Action Group (CAG). These CAGs are then further capacitated to take a stand against gender-based violence in their own community. CAG members receive training on key principals, tools, and techniques of community mobilisation and then plan and implement their own community activation event designed to raise awareness about gender-based violence in their community.

To date, LvA has facilitated workshop series for two groups of women. During these workshops, the participants were able to speak from personal experience about the abuse they had experienced in their own live and the ways in which patriarchy and harmful gender norms and stereotypes oppress women in their community and suppress their voice. They further noted how women are more vulnerable to abuse due to economic dependence on their abusive partners. Throughout the workshops, participants were eager to learn so that they could help other women in the community. Following each of these workshop series, each set of graduates formed a CAG. These groups then met weekly for the additional capacitation as discussed above.

The groups are currently planning two community activations to take place during the upcoming 16 days of Activism against Violence against Women and Children, taking place between 25 November and 10 December. The first activation will be at a mall in the community where the CAG, in partnership with local police and other state actors, will set up stands where they can engage community members about GBV and available support services. The second planned activation will be a door to door campaign where group members will go into the community in order to engage community members on an individual basis to raise awareness about GBV and available support services. LvA is encouraged to see project beneficiaries take ownership over these events and to witness their determination and dedication to addressing GBV in their community. 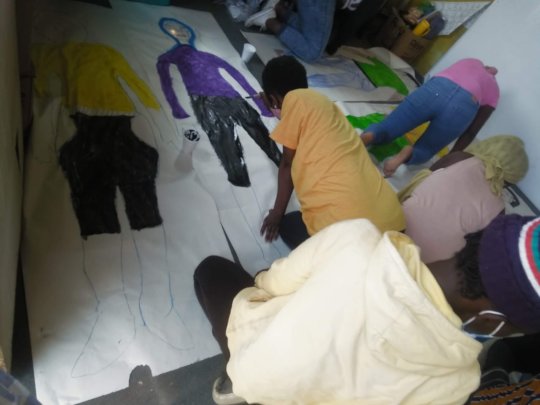 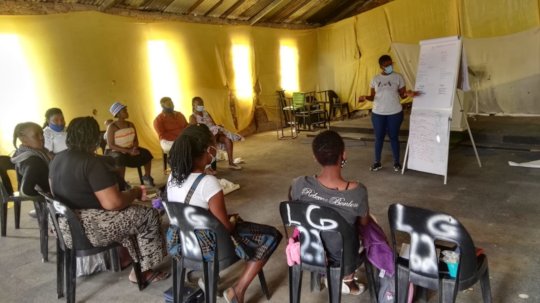 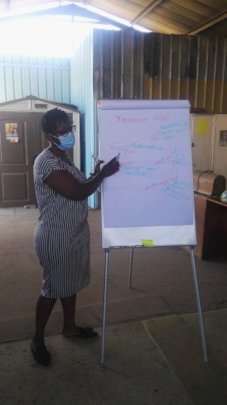 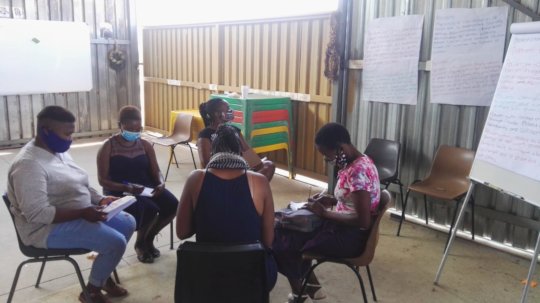 Participants break out in small groups