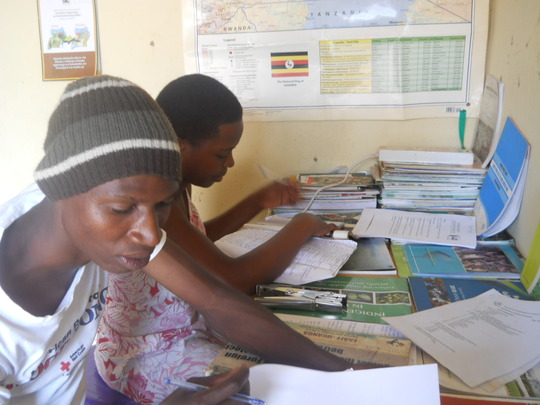 Some of the students at the Centre studying

Since we started the campaign for fundraising for the resource Centre, I have been reflecting and evaluating the love, generosity, knowledge, advice and guidance support you rendered to us to start the community resource Centre. I again thought of finding appropriate words to say thank you but failed, but I would only say thank you very much for what you have done for us so far, the community is very grateful with all what you have done.

Allow us to wish you and your families a very wonderful Easter season.

We are so excited to have the doors of the Resource Centre open and farmers, students and community members going through computer literacy courses. But we lack the consistent funding to fill the modems to connect the Internet and internet services in the resource centre for the entire community.

The center was launched on 20/12/2012 and is doing well with a lot of challenges. It is a multi-purpose Centre where information is generated, disseminated, managed and shared. It is a place of reference and referral whose main target is the local community, researchers, and government and non-government organizations.

It is equipped with 5 computers though to serve the community we need at least 10 computers. We recruited 10 students and 5 farmers on full scholarship and are training to be computer literate and will be graduating at the end of April 2013.We have registered 45 youth and 20 farmer who want to become computer literate but without more funding to facilitate the centre, we cannot go ahead with the programme, therefore we are soon to be stuck.

Since the time we opened up the resource center, we met a lot of challenges. These ranged from financial to every day challenges that arise from change of environment.

Due to the above mentioned challenges, we have decided   launch a second campaign to solicit more fund and to recruit at least 50 recurring donors by 31st 15th 2013 who can give $10 or $ 25 or more every month through GlobalGiving so that we can meet some of the above mentioned challenges. It will be an exciting day - we can have consistent Internet and know that the Community Innovation Resource Centre can be open every day to provide services to the community.

We are so thankful for your support. So thankful! Your  donation is so exciting to the whole community each time we receive it. I want to humbly ask you if you would be able to donate to us more and also become our recurring donor and again help us to recruit 2 or more donors who are your friend and willing to help people in great need like us so that we can achieve our objectives.

That is why we are launching another campaign to get 50 recurring donors by 15th April 2013 who can donate to the Centre at least $10, $25, $50, $100 or more per month or once, get more computer, get a photocopying machine and 2 bicycles for the volunteers. These donations will help us to connect to the Internet, service computers every month, and ensure our resource Centre tutors (attendants) can be there every day, in order to serve our community diligently.

We want you to join the struggle to make the Kikandwa community computer literate and also help us to sustain our services. Please write me back with questions or responses. I would love to stay in contact, send photos, and send our financial plans if you would like to see as our partner.

Thanks AGAIN FOR YOUR GREAT LOVE YOU HAVE SHOWN US.

The whole of the future is built in global partnerships and we are so honored to have this relationship.

Items which are urgently needed per year for the resource Centre to be fully operational.

Allowances for the computer trainer 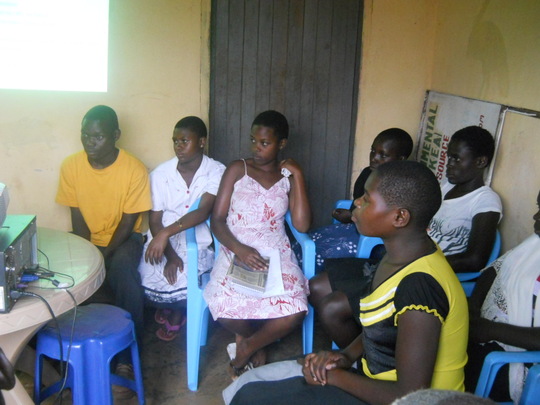 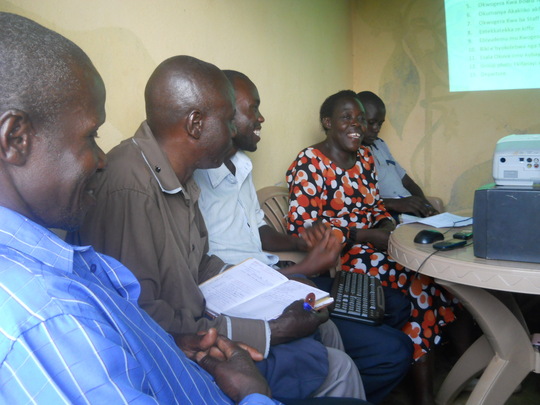 Board members of the Centre briefing the students 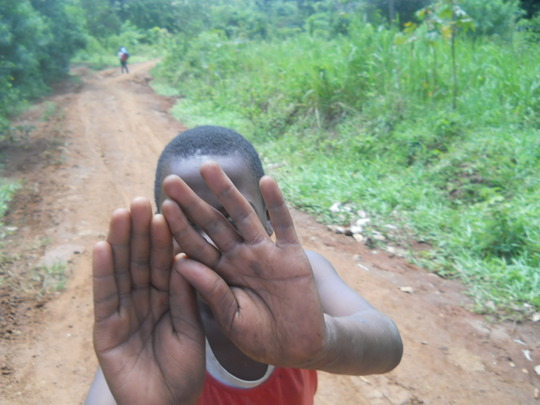 One student saying NO to computer illiteracy 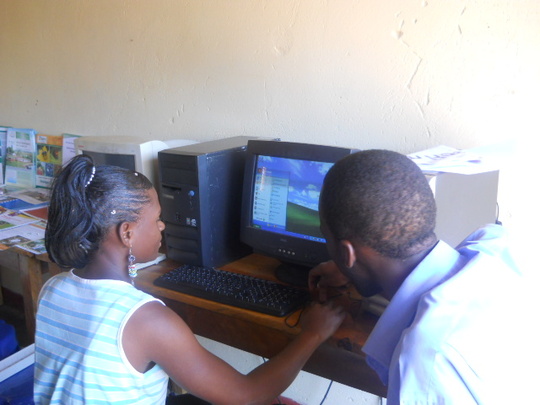 People of Kikandwa community will celebrate the new year 2013 with a lot of joy and jubilation due to the opening of the long awaited community innovation resource center which was launched on 20th December 2012.

The people along with their lead person and community leaders have been working hard to build a resource center in Kikandwa Sub County so that local residents can have access to internet, media and up to date information not only in the field of computing but also in the field of farming since Kikandwa is an agricultural oriented sub county.

The resource center will be a multi-purpose center where information will be generated, disseminated, managed and shared. The center will be a place of reference and referral whose main target is the local community, researchers, government and non-government institutions, nationals and people from outside the country.

With the resource center which is equipped with computers and other secretarial tools, people will be able to access internet where they can access new farming practices and ideas for low cost green construction, natural ways to fight pests and diseases. People through the resource center will be able to establish working relationships with farmers from around the world and join networks that have information on everything on sustainable development from food diversity to primary education curriculum.

Within the radius of 50 kilometers of Kikandwa, there has been no resource center of this kind. Currently Kikandwa residents have been travelling 3.5 hours by bus to the capital city of Kampala to access internet services.

The center will therefore cut on people’s expenditure on transport to the city since it is open to the public and it is easy to access as it situated along the main road from Kampala to Hoima district in Uganda. It will serve more than 15000 people when it is fully operational.

The resource center will act as an information Centre for a number of activities including agriculture and food security, environmental awareness and sustainability, climate change adaptation, marketing and marketing skills, policies and laws in applicable sectors, education, health, land and food rights, gender and gender main-streaming and the promotion of local innovation.

During the opening of the resource center, the political head and the chairman of Kikandwa Sub County said that “generating, dissemination, managing and sharing of knowledge on various pillars of development is the key to economic, social, political and environmental sustainability”. He urged the community to utilize the resource to improve and sustain their livelihood.

He also requested the community to join him to thank all the people who donated the funds, time and knowledge to the establishment of the resource center. He thanked Kaganga John who came up with the wonderful initiative which will contribute a lot to local, national and international sustainable development.

He said that “the resource center is not fully equipped as it was planned therefore he requested all parties who donated the resources to continue and donate more.”  He also requested those who did not donate on the first round to donate so that the resource Centre can be fully equipped with what is remaining such as internet, radio and television where the community will access current information from their local areas and around the world through books and e-books, newspapers and other publications such as newsletters, factsheets, posters, policy beliefs and position papers.

The community innovation center received a donation of $4305 while it was forecast to cost $8750 dollars to be fully functional.

Items which are urgently needed for the resource Centre to be fully operational.

Total amount we are requesting as per item is as follows 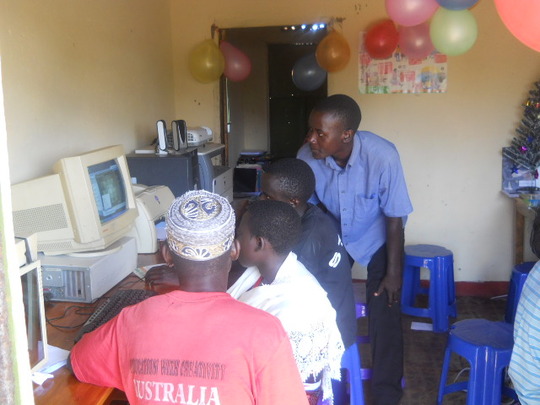 Other students getting some hands on training 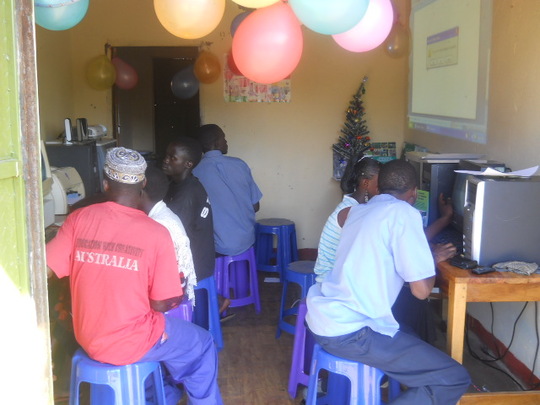 Students and their instructor. 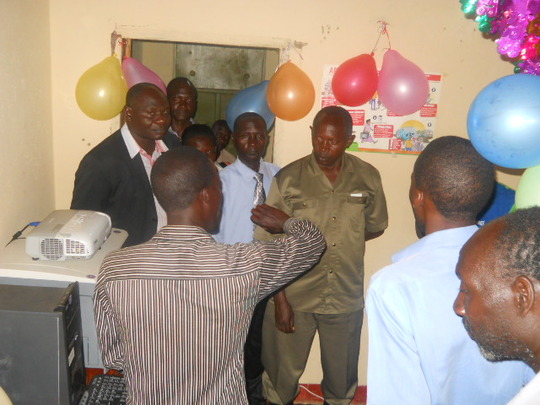 Community leaders during the grand opening 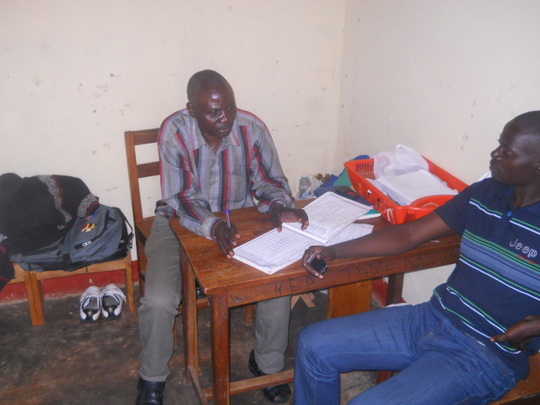 Kaganga John and one of the community members 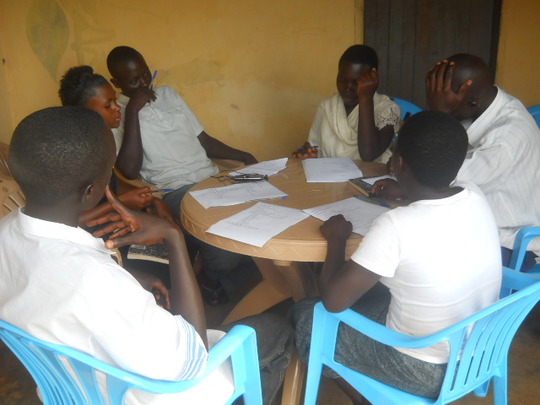 Students having a group discussion at the center 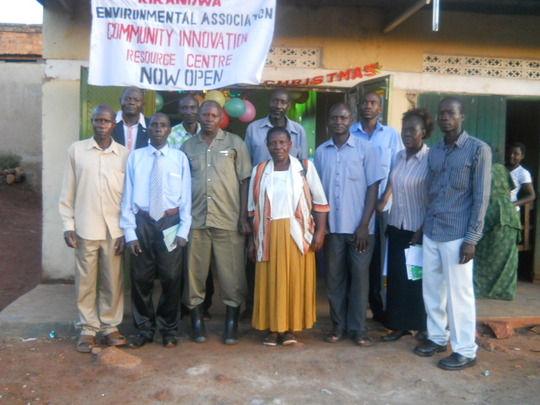 staff and community leaders at the grand launch 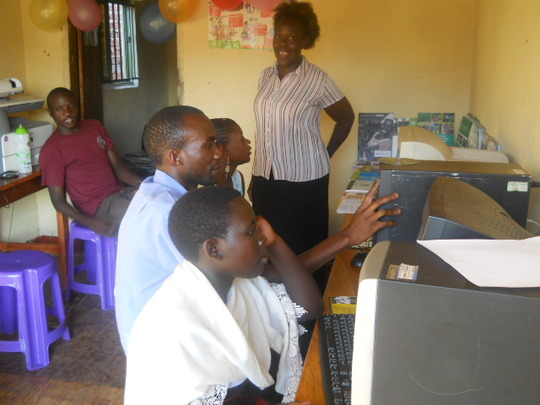 A lady farmer admiring the trainees at the center
‹ 1 2 3 4 5 6 7 8 9
WARNING: Javascript is currently disabled or is not available in your browser. GlobalGiving makes extensive use of Javascript and will not function properly with Javascript disabled. Please enable Javascript and refresh this page.