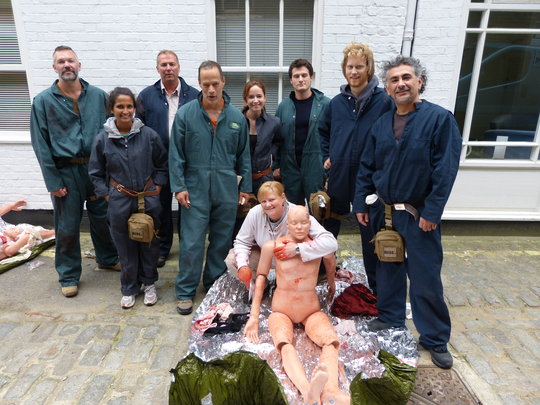 Sebastian Junger and colleagues in London

Marking a major milestone for our organization, RISC held its first course outside of the United States in October. We trained 24 mostly Europe- and Middle East-based journalists at the Frontline Club, a hub for correspondents in central London. Among our trainees was Manu Brabo, part of the team of AP photographers who won a Pulitzer Prize for their coverage of the Syrian civil war, and Sebastian Junger, RISC's founder. "Not only was it a very powerful experience for me," said Junger, "but I was able to evaluate, first hand, the course that I concieved of almost three years ago, after Tim got killed." Junger is working closely with our instructors to make small but important changes in the course that will make the experience even more realistic and valuable to our trainees.

We are now working to establish partnerships with venues in the Middle East to train more journalists there. Syria remains the most dangerous country in the world for journalists, according to the Committee to Protect Journalists. Unrest in Egypt continues, sporadic car bombs rock Beirut, and renewed clashes in Libya have brought more danger to reporters in the region. November 22 marked one year since journalist James Foley, who participated in our first RISC course last April, was seized in Syria by armed men. Our thoughts and prayers are with his family and friends. Please sign the petition for his release at www.freejamesfoley.com.

RISC's "War Correspondents at the Brooklyn Brewery" series has continued to pack the house with audiences eager for stories from the front lines. CJ Chivers of The New York Times spoke on September 11 about his experience covering the World Trade Center attacks 12 years ago, reporting in Afghanistan and Iraq following the attacks, and working in Syria today as the spate of journalist kidnappings has reached unprecedented levels. On September 30, ABC News's Bob Woodruff told his incredible tale of survival after being wounded in an IED explosion in Iraq. And on November 9, Jon Lee Anderson of The New Yorker interviewed veteran photojournalist and RISC alum Robert Nickelsberg about his experience covering Afghanistan over the past quarter-century. Our last event of the year features photojournalist Ashley Gilbertson and VICE Editor-in-Chief Rocco Castoro. If you're in town, come on out for beer and war stories: http://www.togather.com/community/details/32.

It has been just over a year since we started collecting donations here on GlobalGiving. Please consider making a year-end pledge to help us train more journalists in more locations. Even the small amounts make a difference for these freelancers. Your support is greatly appreciated.

Best wishes for a happy and healthy holiday season! 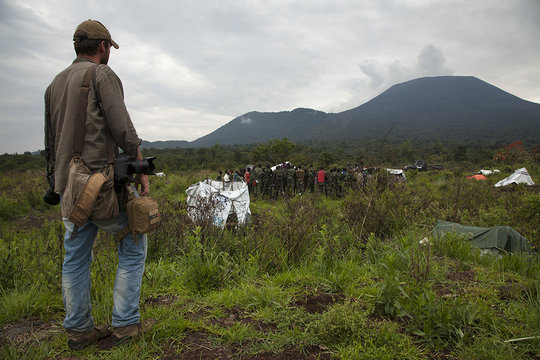 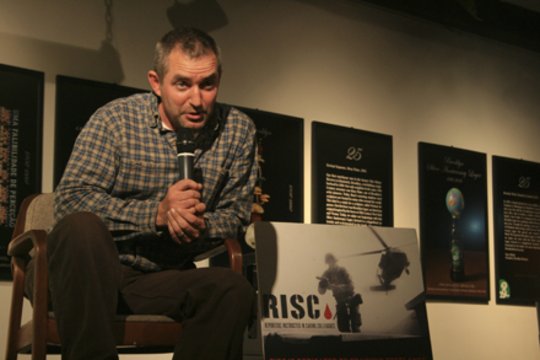 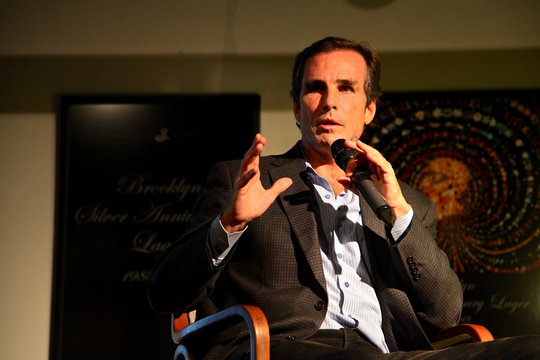 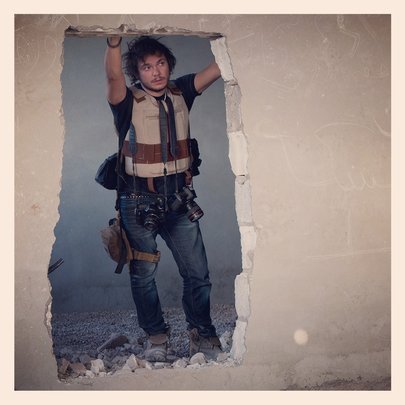 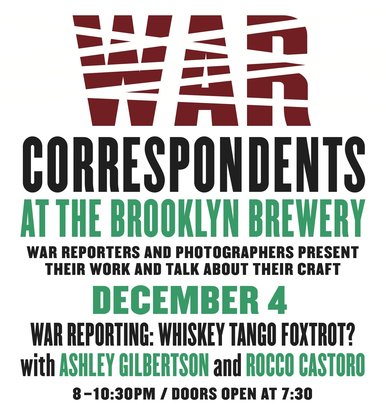 The last War Correspondents event of 2013

RISC heads to London for first course outside the US 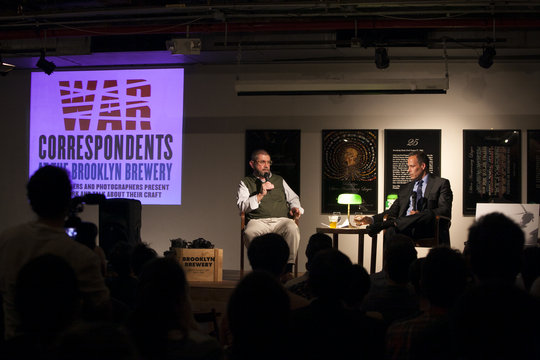 RISC will hold its first training session overseas this October 6-9 at the Frontline Club in London, marking a major milestone for us. Making RISC courses more accessible to freelance reporters based outside of the United States has been a central goal since our founding. We were only able to make this course a reality thanks to our generous donors and a consistently strong relationship with our dedicated team of instructors at Wilderness Medical Associates International.

We held our fourth first-aid training session early this summer at the Bronx Documentary Center in New York, bringing to 96 the total number of journalists we've trained since our first course in April 2012. We continue the tradition of organizing a group show on the last night of each training, to showcase our trainees' recent work for the public. The group show in June featured work from Mali, Syria, Burma, Iraq, and other areas in conflict, as well as two moving tributes to missing journalists James Foley and Austin Tice.

We've had three packed events this spring and summer in our War Correspondents speaker series at the Brooklyn Brewery featuring Sebastian Junger, Janine di Giovanni and Jim Frederick, and Michael Kamber. The series will continue this fall with New York Times journalist C.J. Chivers on September 11, ABC's Bob Woodruff on September 30, and The New Yorker's Jon Lee Anderson in conversation with photographer (and RISC alum) Robert Nickelsberg. Please join us for these events if you are in the New York area. All ticket proceeds go to help us train more journalists in first aid. Tickets can be purchased at http://www.togather.com/community/details/32. 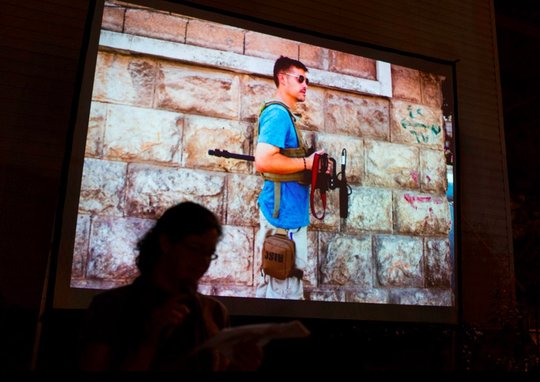 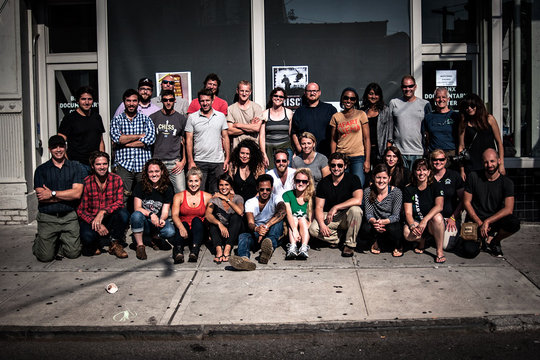 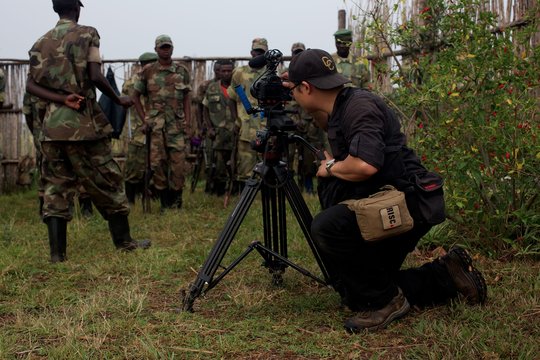 RISC alum Mike Shum reporting in the Congo in June 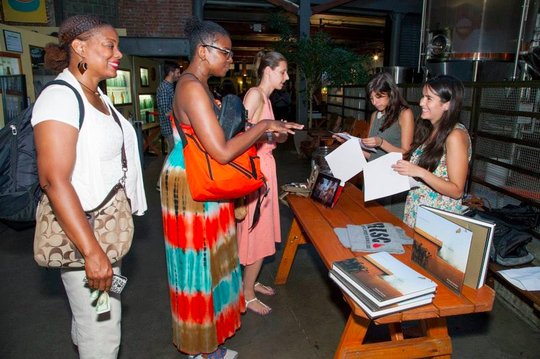 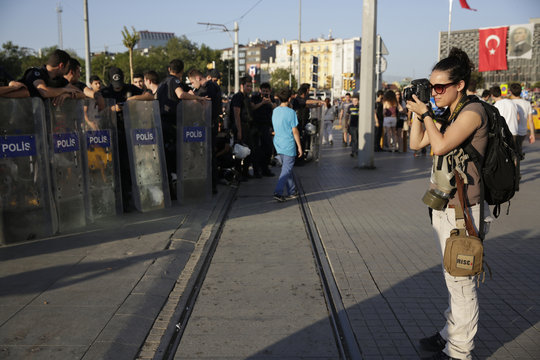 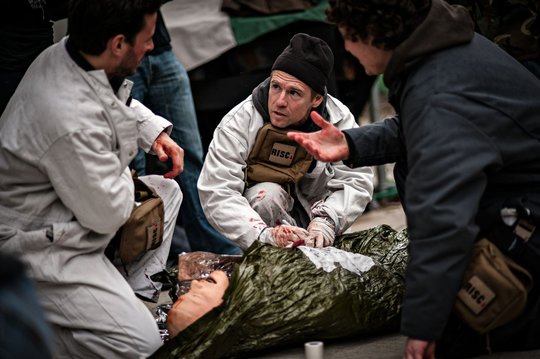 RISC held its third first aid training session for freelance reporters on March 26-29 at the Bronx Documentary Center, bringing the number of RISC trainees since our founding in April 2012 to 72. The group included Fabio Buciarelli, who was awarded the Robert Capa Gold Medal and World Press Photo award this year, along with other prizes, for his photos of the Syrian civil war. RISC will hold its fourth training session on June 18-21.

RISC founder Sebastian Junger’s documentary film, “Which Way is the Front Line From Here? The Life and Time of Tim Hetherington,” premiered on HBO on April 18. On May 2, RISC Deputy Director Lily Hindy participated in a World Press Freedom Day panel at the United Nations in conjunction with a screening of the film. RISC alum James Foley remains missing in Syria. Please consider joining in the appeal for his release at freejamesfoley.org.

On May 8, we launched the War Correspondents at the Brooklyn Brewery speaker series, a monthly event to benefit RISC. The series launch featured Sebastian Junger in discussion with Steve Hindy, the co-founder and president of Brooklyn Brewery who was a foreign correspondent in the Middle East in the 1980s. A slideshow of Tim Hetherington’s photography was shown at the reception. The second event in the series will take place on June 12, with Bob Woodruff and Janine Di Giovanni, followed by Michael Kamber on July 10. Please join us for these events if you are in the New York area. Tickets can be purchased here: http://www.togather.com/community/details/32. 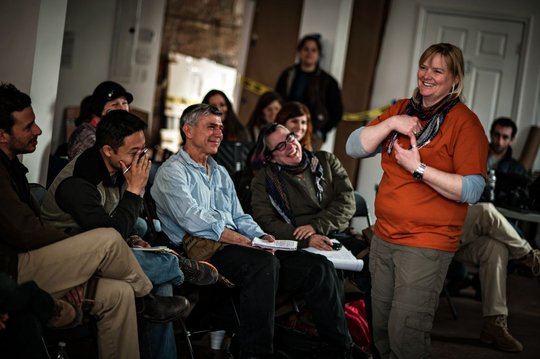 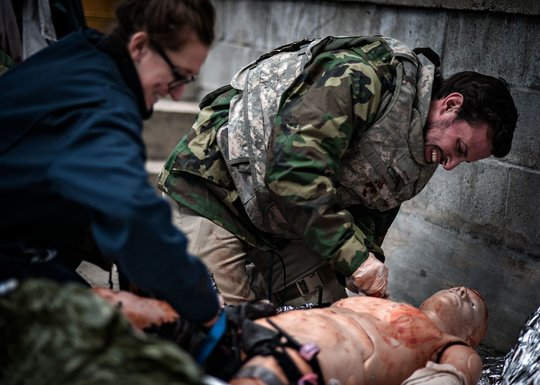 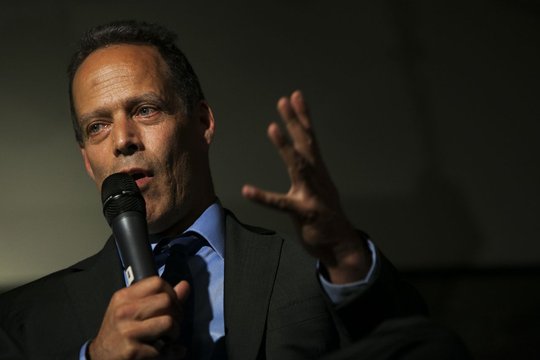 Junger tells war stories at the Brooklyn Brewery
‹ 1 2 3 ›
WARNING: Javascript is currently disabled or is not available in your browser. GlobalGiving makes extensive use of Javascript and will not function properly with Javascript disabled. Please enable Javascript and refresh this page.