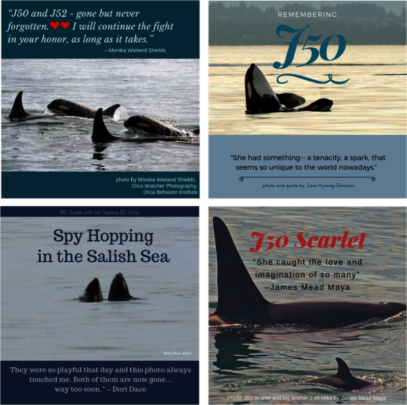 J35 Tahlequah's Tour of Grief
On July 24th, Endangered Southern Resident J35 Tahlequah gave birth to a baby girl who died within the hour. The sad loss of a much needed new calf, especially a female, was hard enough to witness ~ but then J35 Tahlequah carried her deceased daughter's body for at least 17 days after her birth and death, not letting go of the tiny calf as she continued swimming with her family all around the Salish Sea, as if to make sure we all saw and felt her suffering. The Center for Whale Research's account of J35 and the loss of her calf can be found here.

We include Ken Balcomb's brief statement here, to give some direction to the grief we're all feeling right now. There are so many conflicting theories and agendas that some clarity is needed, and we believe this focus on restoring wild chinook is sorely needed:

"The larger environmental question reflected in the J35 story is that both the USA and Canada MUST redouble efforts to restore wild salmon (particularly Chinook) throughout Washington State and British Columbia for a food supply for the SRKW in this region. Whales in this Endangered population are dependent upon Chinook salmon for their primary food source. Unfortunately, Chinook salmon are also Endangered. We have long demonstrated that these fish-eating whales are getting skinnier and skinnier, and the death rate is increasing. This baby whale (and 100% of the pregnancies in the past three years) failed to be viable because the mothers do not have sufficient food. Period. We've got at most five more rears of reproductive life in this population to make it happen, but if we don't do it in those five years, it isn't going to happen. My energy is going toward advocating restoration of wild Chinook salmon populations as a priority."
- Ken Balcomb, Founder and Senior Scientist, Center for Whale Research

J50 Scarlet, ailing, announced missing Sept. 13th
Along with the devastating loss of J35's baby, J pod suffered another heavy blow in June with the news that J50, Scarlet, the near four-year-old fiery little youngster was observed to be not doing well, and likely near death. An effort was launched to take samples to try to determine what was wrong with J50, and NOAA Fisheries attempted administering antibiotics, something never before done in the wild to a free swimming whale. But J50's health continued to deteriorate, and on September 13th the Center for Whale Research announced that J50 was missing and presumed dead.

With the loss of J50, the total number of Southern Resident killer whales now totals 74 whales.

"This is what extinction looks like, lack of reproduction and poor survival in the young age whales. We're witnessing it. If we want to avoid it, we start recovering the wild natural Chinook salmon that are essential to their diet."- Ken Balcomb

And while these tragedies were unfolding, the Governor's Task Force on Orca Recovery was meeting and learning and talking about how to help the orcas and the salmon they need. They have just released their DRAFT REPORT of potential recommendations and are  ACCEPTING PUBLIC COMMENTS THROUGH OCTOBER 7th.

To help everyone to better digest and understand the Task Force document, we bring you:
A SIMPLIFIED GUIDE TO THE SOUTHERN RESIDENT ORCA TASK FORCE DRAFT REPORT PUBLIC COMMENT SURVEY

Compiled through a partnership between Orca Network and several other organizations, we are providing this guide to help you navigate the task force draft report and participate in the public survey. Click on the link above for a simplified, easily digestible version of the potential recommendations and an explanation of how to complete the survey.

It is important the Task Force hears our thoughts about proposed actions, and which actions are the most important to the survival of the Southern Resident orcas. We hope you will comment on the draft document.

And the news is not all bad - there are several Southern Resident females who are in late term pregnancies, and there is hope yet for a new calf or two to be born in the months ahead. They have made their first two forays down into the inland waters of Puget Sound, the beginning of their fall/winter season following the chum salmon runs in Puget Sound. So we all watch and hope, and each do what we can in our own ways to save the Southern Resident orcas.  To learn what you can do to contribute to recovery actions, please visit our Orca Network Action Page. 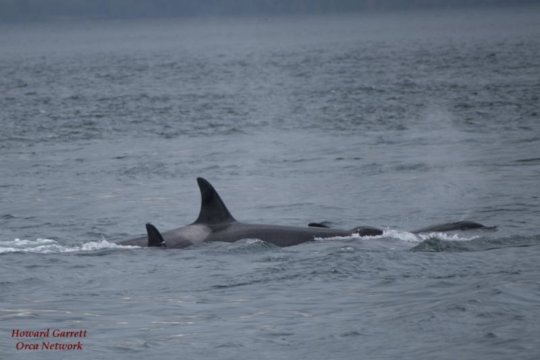 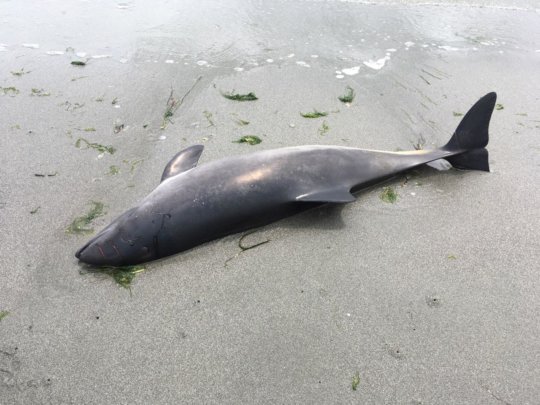 Thank you so much for your generosity this year on helping fund the various projects we are pursuing. The Central Puget Sound Marine Mammal  Stranding Network is gathering a great deal of information about the diseases affecting our local marine mammals and the health of their environment.

And now I am excited to tell you about a brand new extensive research project on Antibiotic Resistance we have just begun, funded through the Wildlife Disease Association's crowd-funding grant program. Our goal was to raise $7000 for the project, we met that goal, and met our stretch goal of $9000, and won a prize for the most backers for our project (this crowd-funded grant program has now ended, but your support through GlobalGiving will pay the costs of CPSMMSN staff who respond to collect dead stranded seals and porpoise for this study, and the costs of other testing done on the marine mammals we necropsy).

Antibiotic resistance is an important health issue of both humans and animals. Resistant bacteria come from land animals, humans and agricultural practices.

Our mentor Dr Stephanie Norman, DVM, PhD has initiated a three year study to determine if antibiotic resistant bacteria are present in harbor seals and porpoises in our local urban waters.

Resistance may be created when water carrying antibiotics and resistant bacteria enters the Salish Sea. (which is the name for Puget Sound and US and Canadian inland waters)  As you know, whatever we ingest on land eventually ends up in the marine environment. To learn more about how antibiotic resistance happens, read this informative article by Dr. Norman.

This project is designed to collect selected samples at necropsy of multiple species, from all age classes and from all locations in the Salish Sea. Bacterial colonies that grow in the laboratory will be identified and tested against a collection of common  antibiotics used in veterinary and human medicine.

The three goals in the study are (1) describe the presence and extent of antibiotic resistant bacteria, (2) determine difference in resistance between seals and porpoises and (3) determine geographic patterns.

Starting immediately we will collect and sample as many seals and porpoises as we can over the next year. The following year is to complete the compilation and data analyses and summarize results. The final step is to complete the write up of the results and submit it to a peer reviewed journal for publication.

We thank you for all your past support, and hope you will continue to support us in this worthy project. 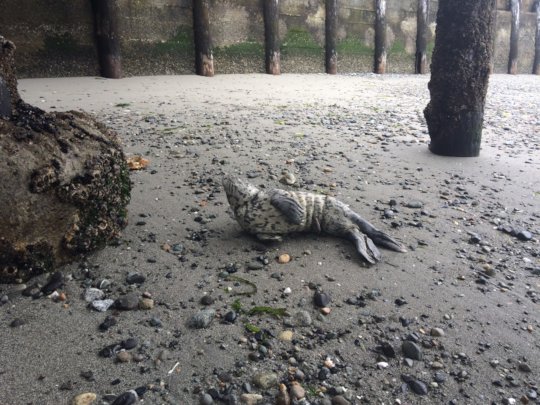 Changes in cetacean use of the Salish Sea 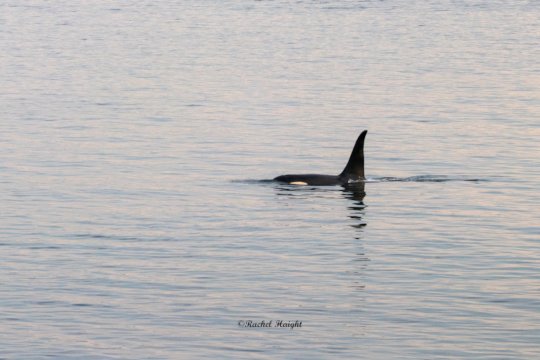 Joy reverberated through the community when J pod and most of L pod came to the inland Salish Sea on June 11th, the first by any Southern Resident orcas for nine weeks. Their presence was bittersweet with the sad news from the Center for Whale Research that 23 year old L92, Crewser was missing and presumed dead. L92 is usually seen with his aunt L90, who was seen in recent encounters, with L92 nowhere in sight.  With the loss of this lovely young adult male, the population of the Southern Resident orcas is now down to 75 individuals.

Since their June 11th arrival, J pod and most of L pod have come and gone several times. K pod has yet to come inland, but was seen off the west coast of Vancouver Island one recent day, and all three pods have been seen in western Juan de Fuca Strait this first week of July, but none have come inland. The absence of J, K and L pod in their historical summer core habitat speaks clearly to the current conditions; no spring Fraser River Chinook salmon, no Southern Residents in the Salish Sea.

On one of the few days Js and Ls have been inland, members of L pod chose to exit through Cattle Pass on summer solstice Thursday, which is a rare occurrence. Here is VIDEO of them tightly grouped exiting the pass.

Early April one of our Whale Sighting Network volunteers was first to photograph a new calf in Puget Sound later determined to be T65A6, the sixth calf of T65A, one of the more "resident" Transient pods to this region. After a short stay in the Sound, they spent two weeks in Hood Canal, and have traveled deeper into Puget Sound and stayed inland Salish Sea ever since, primarily around the San Juan and Gulf Islands the month of June.

You can meet the new calf T65A6 in these videos, first when she is just weeks old and a month older: May 1st in Hood Canal and June 5th Carr Inlet, southern Puget Sound.

The ongoing presence of Bigg’s (mammal eating orcas) has become the norm. Some of these families have been seen nearly every day for the past many weeks in the Salish Sea. Sometimes they are joined by families who haven’t been seen for many years (if at all) which is the case this past week when the T176s and T175 showed up providing researchers an opportunity to get out with these whales we know little to nothing about, and our Whale Sighting Network the opportunity to assist in documenting their travels while here.

2018 was an extraordinary year with the returning Sounders (North Puget Sound Gray whales), who as reported in our last update were joined by one known (Pacific Group Feeding Group #185) and two unknowns who fed along with them in the mudflats of North Puget Sound. Through our Whale Sighting Network, volunteers, and cooperation with others, we were able to get great documentation on travel patterns, feeding hot spots (record number of feeding pits), socializing behaviors, etc. throughout the spring. This summer we have also been tracking and documenting the continued presence of PCFG 185 who is feeding in Possession Sound (see July 3rd video), as well as the second unknown who is keeping to the Oak Harbor area of Whidbey.

The changes over the past several years: residents forced to shift their core feeding areas; mammal eaters keeping year round presence in the inland waters; two new gray whales taking up residence in North Puget Sound; humpbacks recolonizing; and other species showing up, like the bottle nose dolphins, has kept our Whale Sighting Network extremely busy.  Participation in the WSN is ever growing and continues each year to be more active than ever. Our Whale Sighting Network provides a central place to collect data for our Whale Sighting Reports and for reserachers and agencies across the NW Region, but also provides an inclusive public place for anyone to contribute sightings and keep current with the latest research and updates on all of the many cetaceans who call this place home.

We simply could not do this work without support from people like you! With heartfelt appreciation on behalf of the whales, thank you ~ 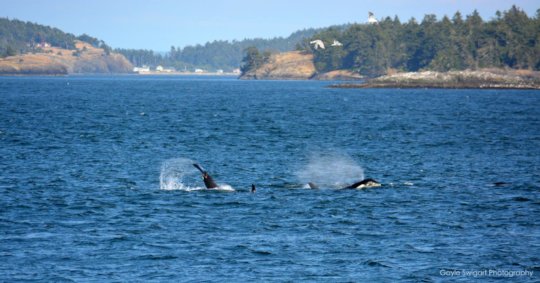 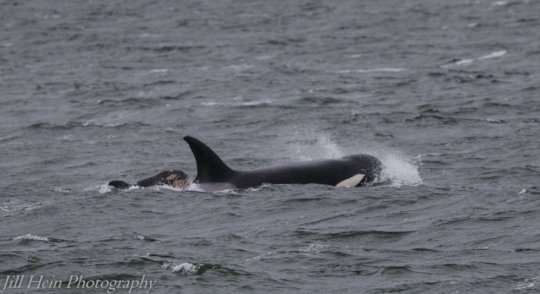 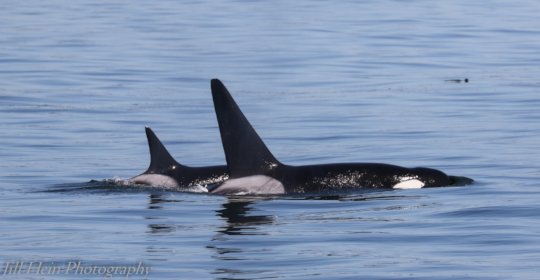 ‹ 1 2 3 4 5 6 7 8 9 ... 21 ›
WARNING: Javascript is currently disabled or is not available in your browser. GlobalGiving makes extensive use of Javascript and will not function properly with Javascript disabled. Please enable Javascript and refresh this page.