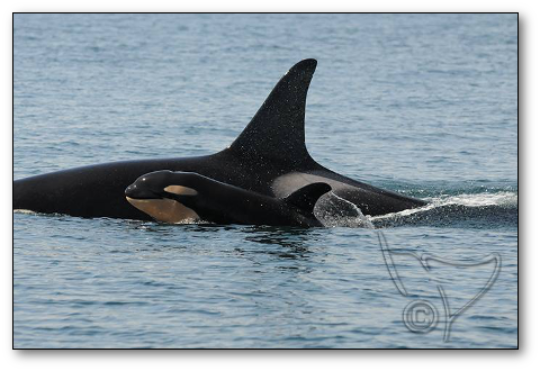 Each of our last two reports brought the amazing news of newborn Southern Resident orca calves, and we are amazed and thrilled to again report TWO MORE NEW CALVES!

Baby L122 was born in September, first photographed September 7th by the Center for Whale Research. The calf is a male, born to L91, "Muncher".

Baby J53 (the FOURTH new J pod baby this year!) was first seen by researcher Mark Malleson on October 24th, born to J17, "Princess Angeline". The gender of J53 is not yet known.

Researchers who have been measuring the orcas' girth via hexacopter, also believe there are several other Southern Resident females who are pregnant and likely to give birth soon - welcome news for this endangered population. And though this is exciting news, we must remember that there were NO births for two and a half years before this "baby boom", and it will depend on the robustness of future salmon runs all along the Pacific coast whether or not all the new babes will survive, or whether there will be more deaths in the community (50 year old L27 is listed by the Center for Whale Research as "missing" as she was not with her family during several encounters in late summer/early fall).

But these new calves give us much hope for the future of the Southern Resident orcas, and we hope the next report will have news of even more births. The Southern Resident orcas typically begin their fall/winter forays into Admiralty Inlet and Puget Sound in early October. They were a month late this year and didn't appear in the inland waters until November, but they have been sighted and tracked by Orca Network's newly trained Whale Sighting Network volunteers and many "citizen scientists" and whale watchers along the shores of Puget Sound and on board the many ferries that criss cross these waters several times a week so far this month.

Along with the excitement of new calves, we are pleased to be seeing an abundance of Humpback whales in the inland waters of the Salish Sea - there have been one to two Humpbacks feeding daily between N. Kitsap Peninsula and South Whidbey Island for the past several months, and more sightings near Gig Harbor and the Tacoma Narrows. Six to eight different individuals have been documented, including a mother calf pair. The humpbacks with their majestic pectoral fins and acrobatic breaches and tail lobs have provided much delight for shoreside whale watchers. Humpback sightings were rare in this area until recent years, and this is the first year we have had a number of them sighted daily in the inland waters. We believe this is a sign of Humpbacks beginning to re-populate former habitats as their population continues to rebound, after being severly depleted by hunting many decades ago.

It is wonderful to have these success stories to share, and we have one last success story for this report:                Orca Network's Langley Whale Center after a successful year and a half has now moved into a larger building next door to our former location (now at 115 Anthes, Langley, Whidbey Island, WA). This larger area provides room for additional displays, and space for holding presentations, classes and events. It is a big step for us, but we have already seen an increase in visitors, and it provides a much needed larger facility to share our displays about the whales of the Salish Sea, and educate people year round. The Whale Center is open Thursdays through Sundays, 11 am - 5 pm, we hope you can stop and see us sometime soon!

Your donations enable us to keep up with the whales in the Salish Sea, and to educate the public about them and how lucky we are to have them in our midst - thank you! 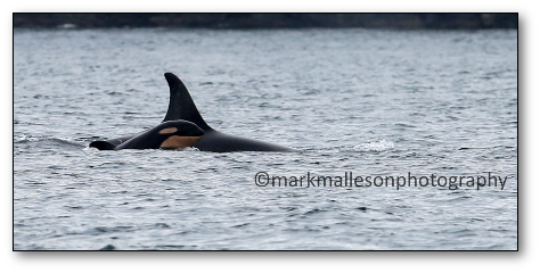 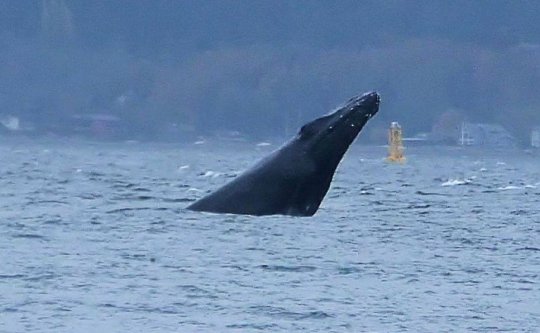 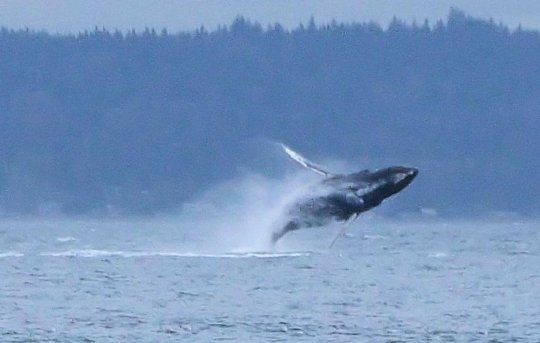 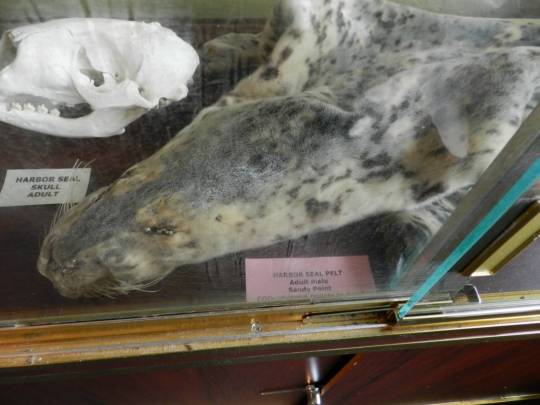 Harbor seal skull and pelt on display at Whale Ctr

Since 2002 the Orca Network/Central Puget Sound Marine Mammal Stranding Network has been authorized by NOAA to investigate dead and stranded marine mammals and collect specimens from them for testing, research and public education.

In our Langley Whale Center we have many of these specimens ranging from tiny half inch long porpoise teeth to a 17’ long jawbone of a blue whale. We have skulls of seals, sea lions and small cetaceans, harbor seal pelts and baleen and vertebrae from gray whales.  Several of our specimens have been donations from folks who had collected bones off the beach decades ago. Among these is a humpback vertebra and a walrus oosik (anyone who has ever been to Alaska knows what an oosik is).

The15,000 visitors we have had at the Langley Whale Center since we first opened in spring 2014 have enjoyed learning about the displays and many, in turn, have related their own personal experiences. (education is a 2-way street). In mid-October Orca Network's Langley Whale Center moved into a larger building, to accomodate more visitors and exhibits, and to have room for monthly presentations. We will be receiving additional specimens from the Center for Whale Research this month to add to our displays, including baleen from a Humpback whale, which is a species just recently becoming more common in Puget Sound.

In addition to collecting specimens for our own use, we have provided many tissue and skeletal specimens to other NOAA approved institutions like universities, research labs both civilian and military, major aquaria and state parks, among others.  We have provided an entire gray whale skeleton with baleen to the Smithsonian Institution for study. One of our major projects took years to complete- the collection, cleaning, preserving and reconstruction of the entire skeletons of a gray whale, Dall’s porpoise and Steller sea lion for display in the neighboring town of Coupeville.  We hope to prepare the skeleton of a harbor porpoise soon for display in our new Whale Center facility.

Along with the display specimens at the Whale Center is a notebook containing a pictorial history of the results of our investigations into the cause of death of these animals. This notebook is of particular interest to those visitors with a medical or other scientific background.

It is illegal to ever receive any remuneration for collecting and distributing marine mammal specimens, so we give a hearty and heart–felt thank you to our donorrs for enabling us with your generous donations to purchase equipment for necropsy, harvesting, cleaning and preserving specimens for education. 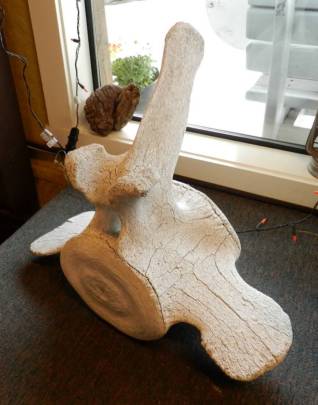 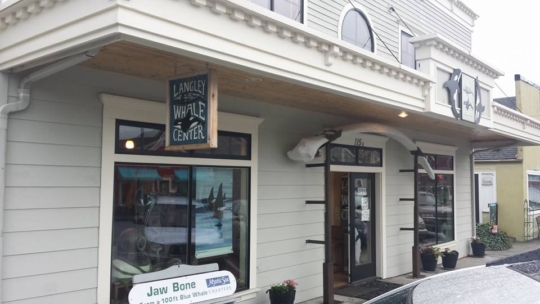 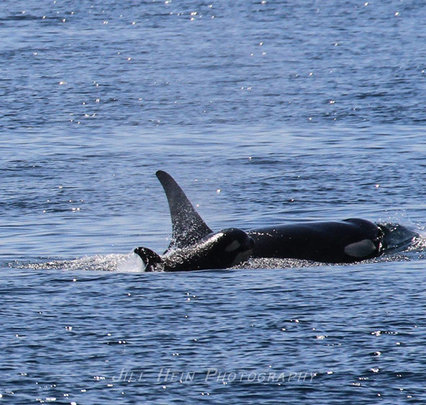 Our February orca update included welcome news of two new calves, J50 and J51. We are pleased to share the happy news of an additional two calves. L121 was thought to be just a few days-old when first seen by NOAA near Westport off the Washington coast on February 25th swimming with his mom, L94. And, as if our euphoria over a third calf wasn’t enough, the Center for Whale Research confirmed the arrival of a fourth calf, J52, first seen with his mom J36 on March 30th by the keen eyes of a naturalist out tracking J pod. With the return of all members to inland waters this spring/summer season (including all four calves) the Southern Resident population stands at 81 members. This number is far more hopeful than last year, but still a fragile and unsustainable number for this clan.

As of August 9th, the gender has been determined and confirmed by the Center for Whale Research (CWR) for 3 of the 4 calves. J50 is the only female. J51 (unconfirmed), J52, and L121 are male. One naturalist did get a good photo of J51’s under side that determined his gender as male, but CWR has not yet obtained their own belly photos to call it official. We continue to receive consistent reports all calves are looking active and healthy while foraging, traveling and socializing the inland waters this spring and summer with their families. And of course they are endearing themselves to everyone with their unique traits and individual personalities.

On August 1st a contributor to our network forwarded her photographs of twelve-year-old male J39 (Mako) with a salmon lure stuck in his mouth. We forwarded the photos to NOAA, the Center For Whale Research, local stranding networks, and our sightings network. NOAA-Fisheries naturally had concerns and took immediate action, “NOAA Fisheries will provide additional interim funding to the Center for Whale Research in Friday Harbor to further monitor the whale, which will help assess the impacts of the lure and possible means of addressing the situation.”

CWR staff encountered J39 on August 6th and shared this update: "We went out yesterday with the mission of checking up on J39 who was seen earlier this week with a fishing lure hanging out of his mouth. As of yesterday we were able to determine that his new found accessory was no longer attached. Whether he swallowed it or it fell out on its own, we may never know. He appeared fine yesterday, and was behaving normally." Staff continues to closely monitor J39.

Our sightings network was unusually busy during late spring and early summer with more frequent and longer visits by Bigg’s/Transient orcas (mammal eaters) in the inland waters of Puget Sound. The T125s were among the many matrilines who spent time in Puget Sound during that time. They are unique in that they had not been seen in the inland waters west of the Pacific since the early 90’s and T127 has a serious injury to his dorsal that made him very recognizable and popular. The T125s traveled throughout Puget Sound but primarily spent their time (most of June) in the inlets and bays in the deep reaches of south Puget Sound. Their prolonged stay presented many viewing opportunities both by land and on the water. In the south Sound public viewpoints are limited and people with boats are numerous. We had several reports of humans on watercraft crowding the pods and interfering with the orcas natural movement. These reports prompted us to review our real-time postings and increase boater education and awareness through the Be Whale Wise campaign. We reached out daily, consistently sharing the current laws/ guidelines when around marine mammals via our Facebook page and our Sightings Reports published 1-3 times a week.

Orca Network's Whale Sighting Network is instrumental in keeping track of the orca's movements, educating the public, and sharing information that helps others make connections. Once they have made a connection they care more and are eager to expand their knowledge of the life and needs of these beings. We very much appreciate your support that enables us to educate and assist others in learning to be good stewards toward the whales and their habitats. 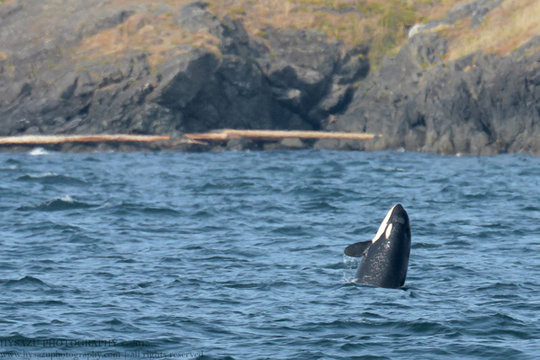 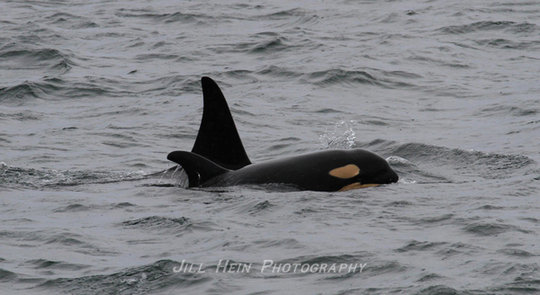 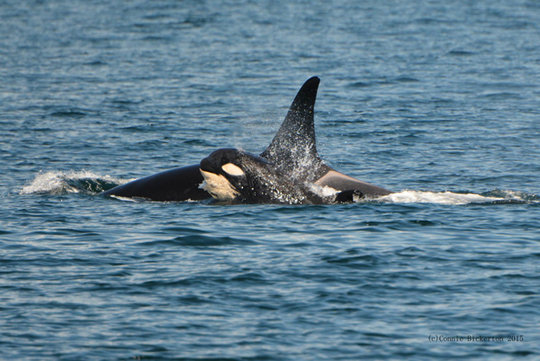 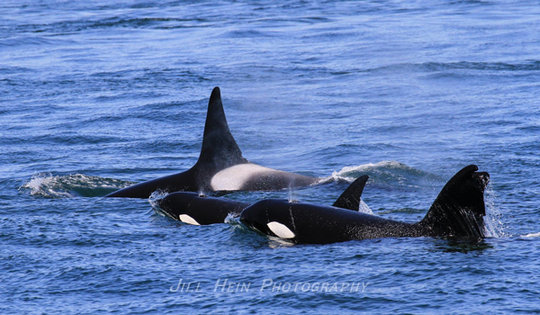 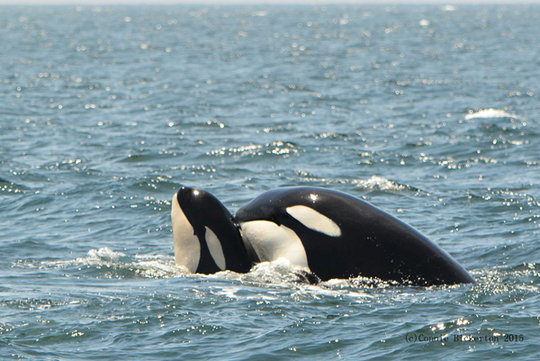 ‹ 1 ... 10 11 12 13 14 15 16 17 ... 21 ›
WARNING: Javascript is currently disabled or is not available in your browser. GlobalGiving makes extensive use of Javascript and will not function properly with Javascript disabled. Please enable Javascript and refresh this page.