Chiedza Child Care Centre’s 25 students from urban areas of Mbare, Ardbennie, and Sunningdale received instruction throughout the 10 weeks covered in this report. The class met twice a week for 3, 5 hours after school on Fridays and Saturday mornings. The following topics were covered during this quarter:

The student visited the National Art Gallery, in Harare. This was the first time for all 17 students who came on this field trip. The students were privileged to have a guided tour of the Art Gallery. They were particularly impressed with the exhibition on the city’s water sources and another on the progression of an artist’s life from a young woman to a mother. Another exhibition that stimulated much thought and discussion was an exhibition titled “Objects of Mediation”. This was an exhibition that showcased various drums, xylophones, instruments that were used in Southern and Western Africa to worship ancestors. The guide at that gallery asked the students to draw a comparison with religious places of worship now like churches and how they too use musical instruments. Many of the students come from a Christian background and it was enlightening for them to see the similarities in different belief systems/ faiths. We also discussed how the US is made up of many different religions and the importance of different religions.

16 Days Activism against Gender Based Violence

To mark this day, the class discussed what Gender Based Violence is and watched a 30 minute local film titled “Pfuma” which brought to light other issues such as HIV/ AIDS, early marriage for the girl child and the importance of education for the girl child. At the end of the film students listed various examples of Gender Based Violence that occurred in the film and how they can stand up against them in their own lives. Students were also taught on where to go if GBV does occur and how to counsel their friends if they go through a similar case.

Naison Jakana a Access student participated and won an interschool’s debate competition. The title of his speech was “Life is what you make it” Naison excels in this English class and he is a great role model to the rest of the class. He chooses to assist his colleagues with class assignments and often encourages them to read books from our library. We are very proud of his achievement!

Our Drama group had a chance to participate in the Drama Festival competitions held on the 30th of November at Churchill Boys High School.15 children accompanied by two staff members and one mentor, were present at the event. There were many events done including poetry, choir and drama .Many schools were participating though some of the school failed to attend. The event was sponsored by the Let Them Trust. The World Aids Day Drama Festival competition was mainly for the awareness of the rapid spread of the pandemic disease HIV and Aids. The theme of the event was ‘Let Them’, which called for the free participation of the children in this present world.

We had good time! Different schools performed well and this made the competitions more tough and challenging. Our Drama group was the first to be on the stage and the guys did well .The time our Drama group entered the stage the atmosphere in the hall changed as they entered in style. Even the spectators and judges confirmed this. We saw confidence in our children and this led them to be awarded with more marks. They only performed for less than 20 minutes and the judges were left with no option but gave what we deserved. The play was short and precise. The performance left the people craving for more; a clear indication that they really enjoyed the play .The play was full of exhibits and its content fell in line with theme of the event. The attire the children had dressed also contributed to the success of our group .This was the uniqueness of our Drama group over other drama groups. Churchill Drama group was our fear and they performed very well but did not manage to be judged the winners. More to that, some schools participate but their plays were not that good. Also Genius Mhlanga and Naison Jakana presented their poems and it was great. After all the schools participated the judges announced the winners and every participator got a certificate as a way motivating them. We were very excited to be nominated winners and all our children were very impressed about what they did.

We also took this opportunity to market the name Chiedza Child Care Centre and many people were eager to hear more about the centre. Many people promised to visit the centre and to our surprise we were invited to attend the launch of Harare City Library by Swedish Embassy on Thursday the 6th of December as guests. 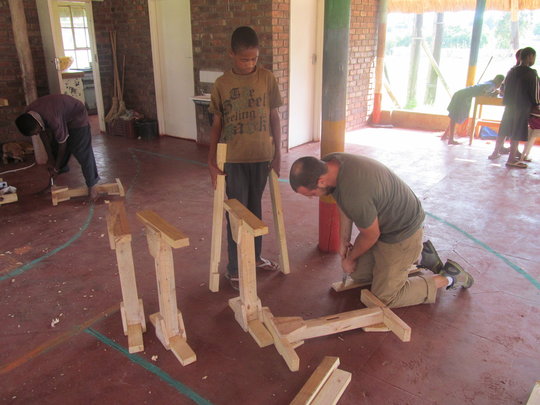 We continue to link the centre with various “elite” Schools who have access to resource that can benefit Chiedza children. During this period we had visitors from Heritage School and St. Johns College.

Sixty children (age between 8-12 years) visited the Lion and Cheetah Park and spent the day at the park. The children were almost feeling like staying at the park because 99 % of them had never been to Game Park before. They never saw some of the animals in reality but only in televisions and books. The trip went beyond the point of entertainment as it also, opened up the mind of the children. It was not surprising to hear some of them calling a buck, a goat. This exposure was of significance as the children came back knew some of the things they never came across. Interestingly, the children had some piece of papers and pens to jot down notes about what they saw and learnt an indication of maturity in our children. We also learnt that exposure is much better than reading books though it creates a foundation.

After the tour we left the park and led our way to have lunch with the children. The whole day was awesome as the children enjoyed the food at maximum. After lunch at the chicken Inn the children played the “Ajig jah” for free. After all the funnies Edith Douglas gave a vote of thanks to the sponsors and they were surprised by the way she presented her speech.

We are holders of the JCI flag in debate and public speaking. Chiedza children had a great experience when they participated in the JCI debate and public speaking competitions held at Prince Edward High School. We were four institutions together with Dzikwa Trust, Blossom and Bindura. Rachel Mhlanga competed in the juniors group and Genius took on the seniors and three other guys were for the debate. In public speaking participants were given a notion to work on which reads; ‘A world fit for children, eradicating extreme poverty’, which was a prepared speech. Our children endow with more content on the topic than any other competitors. The children clutched the chance to expose their talents in front of many people. More to that, they learnt to scrap against the stage fright and self-confidence seems to be part of their nature. They stand their ground full of poise and came out as champions at the end of the event. Rachel Mhlanga representing the juniors came as second in public speaking and Genius Mhlanga representing seniors came as the first in public speaking. Also the other three guys who were working as a team in debate came first and the day proved to be made for Chiedza children. Every contestant from Chiedza walked out with something in his or her hand. This demands more exertion to train our children so as to equip them with leadership qualities. Also this event gave our children the chance to shine in front of respected people like the JCI Senator of East Africa.

The trip was for the English class group as part of their education. Before we took on our tour in the reserve we had a 30 minutes lecture with the guys who were responsible for that. The children benefited a lot from this lecture as it touched much on the ecosystem. Our children were very participative in this lecture. Those who are taking on geography took advantage of the trip as the lecture opened up their mind on natural resources conservation.

The children enjoyed a lot, above and beyond entertainment the trip was of importance as it opened up the children about the history of the country. In the gallery, children saw many of the tools and artifacts which were used long ago. The children were more excited because they came to know how the people were living past back. We had good time and the children learned a lot from the Art Gallery. The social life and economic life of the people of the past was that amazing as the children commented. The trip was an evidence of what the children learn in history as a subject at school, so many of children were helped. More to that, the trip proved to be of significance as most of the children did not even know some of the tools which were used in the past.

We had Dylan Ranch, a volunteer from the USA spending 3 weeks training our children in basic carpentry skills. A total of twenty desks were produced. These desks will be used by the out of school children at the centre.

Our netball team has again qualified to represent the region at national competitions that are going to be held at United College of Education in Bulawayo on the 6th-9th December 2012. We know them well, they have lifted the Chiedza name at national competitions twice, and they are going to do it three times in a row. These competitions have instilled so much confidence among the girls. Chiedza netball team is heading to Bulawayo (the second largest city in Zimbabwe) to defend their national title championship. The girls have so much confidence and it is our hope that their self esteem will make them retain the trophy. They have gained so much experience and resilience in these competitions. 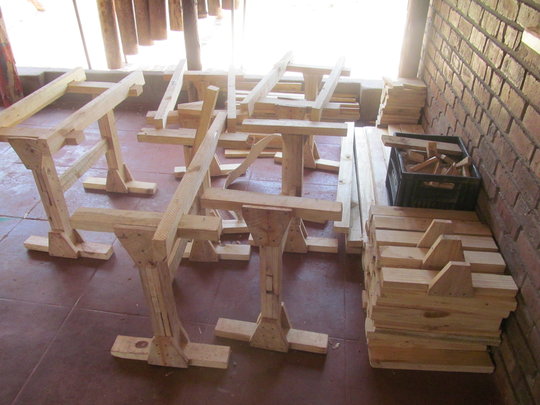 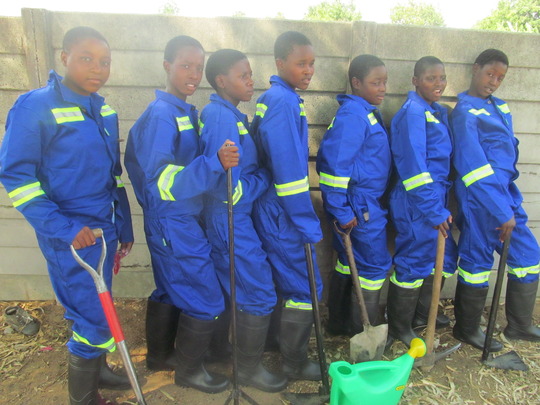 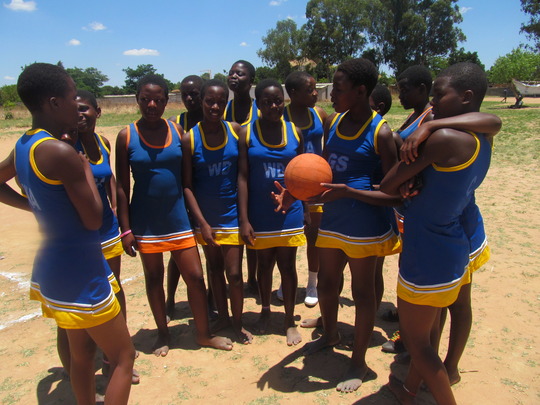 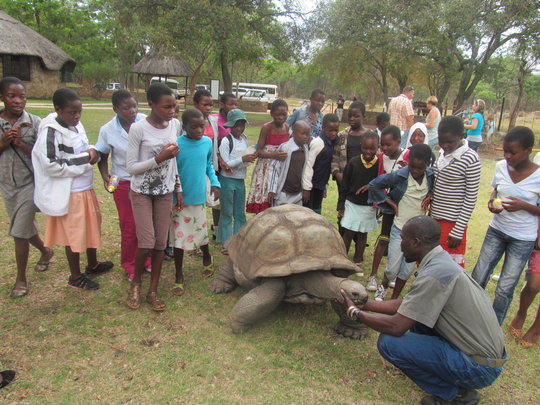 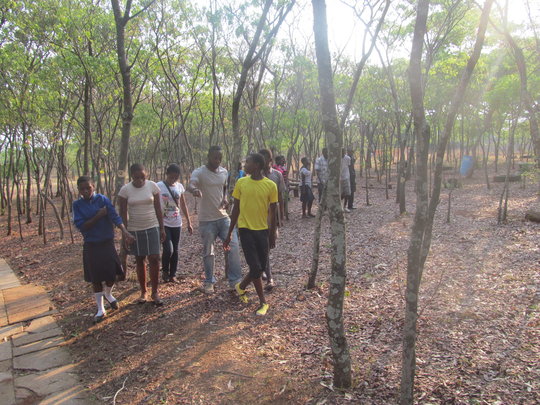 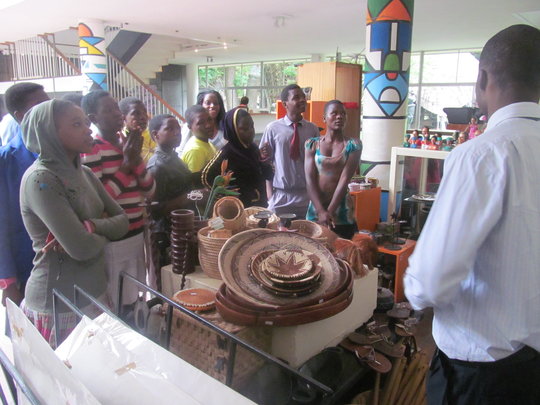 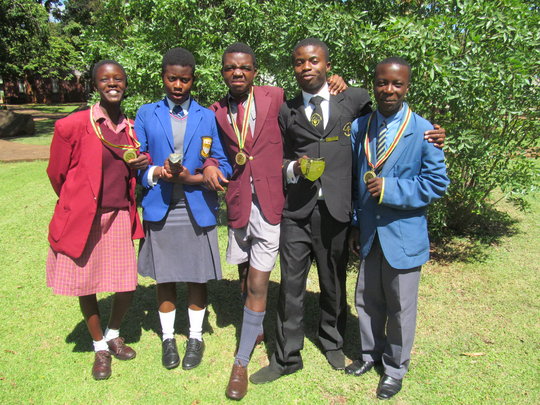