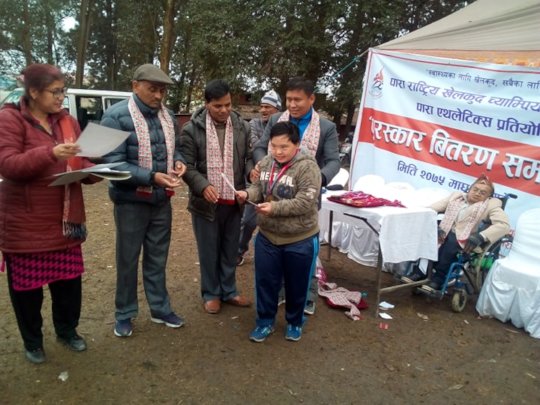 Hello everyone warm greetings from children and youth with disabilities of Patan CBR. Your contribution is helping to change their lives. We look forward to your kind support in future as well.

Three children from Patan CBR participated in a sports championship called Para National Sports Championship- 2018. It was a para athletics competition in which they participated. The event was held at Laboratory School, Kirtipur on January 26, 2019.The program was organized by Nepal Para Olympic Committee and was supported by National Sports Council. There were several events for 4 categories of youth with disabilities (physical disability, intellectual disability, visual impairment, hearing impairment).

The winner, 1st runner up, 2nd runner up were provided cash prizes worth Rs 1000, Rs 700 and Rs 500 respectively. Medal and certificates were also distributed. One girl came third in soft ball throw category (for girls). One boy came fourth in 100 m race category (for boys). The game was managed by Athletics coach of National Sports Council. The participants were very happy to participate in such a mega event.

One of the teacher of Patan CBR said "Participating in sports will increase the confidence of participants and improve skills in relationship building and working as part of a team. It also helps in weight management which is very common in children with intellectual and physical disabilities. Participating in sports and leisure activities will lead to better emotional and psychological health as well as improved social skills". One of the children with intellectual disability said" We like to go to these events because we meet other friends. Sports is interesting to me." 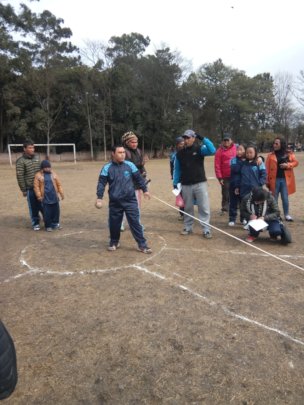 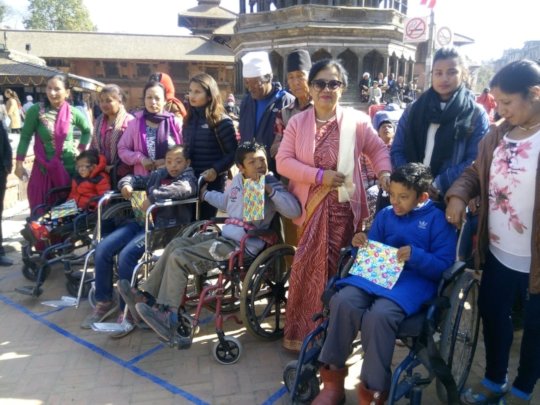 Namaste, we are very happy to tell you that we have raised US $21,600 till now through GlobalGiving. There is no doubt that the journey till here would not have been possible without the warm support and good wishes of our donors. So we take this chance to thank all of our donors and supporters.

This time we bring you the update on boccia ball competition held for children and youth with disabilities. United Nations International Day of Persons with Disabilities (IDPD) has been annually observed on 3 December around the world. The theme for 2018 IDPD was “Empowering persons with disabilities and ensuring inclusiveness and equality”. In Nepal it was observed in a grand way with the slogan 'Count me in’, ‘Ensure inclusiveness and equity for the persons with disabilities’. Patan CBR organized a Boccia ball competition for children with multiple disabilities on the occasion of IPDP. The event took place on December 16, 2018 in the premises of Mangalbazar Durbar Square.

Boccia is played sitting in wheel chair. The aim of the game is to throw leather balls — coloured red or blue (which side uses which is determined by a coin toss) as close as they can to a white target ball, or jack. The jack is thrown first, then the first two regular balls are played (first, the player who threw the jack then the opposing side), after which the side furthest away from the jack goes next in an attempt to either get closer to the jack or knock the opposition's ball out of the way. In this fashion, each end will continue until one side has played all their balls, at which point, the opposing side will play their remaining balls. At the end of each round, or end, the referee measures the distance of the balls closest to the jack, and awards points accordingly — one point for each ball that is closer to the jack than the opponent's closest ball. The team/player with the highest number of points at the end of play is the winner.

The event started with a formal opening by distinguished guests ;MP of Provincial assembly (Province no. 3),representatives from ward office, representatives from Lalitpur Metropolitan, Pulchowk, treasurer of Boccia Game Association, Nepal. All the guests were welcomed and souvenirs were given. After coming to know about the work Patan CBR is doing, the political leaders were so impressed and they promised to allocate budget in the coming future for welfare of children and youths with disabilities and also avocate for their inclusion.

After the formal opening, the demonstration was given on how the game is played by the coaches. Then the game was started. In   each round, two teams played (each team consisted of three members). Around 300 people from community observed the event. In total 49 children and youth with multiple disabilities participated in the event. To make the event friendly, although the winners were declared, prizes were distributed to all the team members. 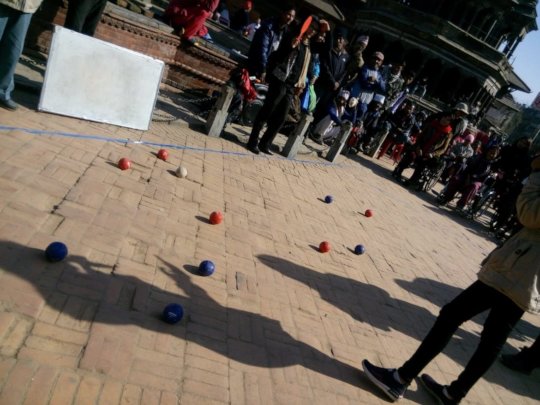 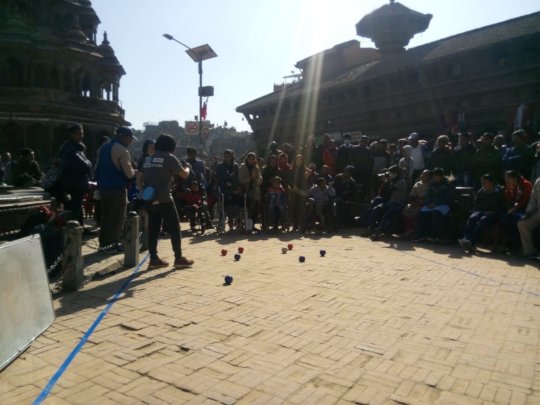 Outing for Children With Disabilities 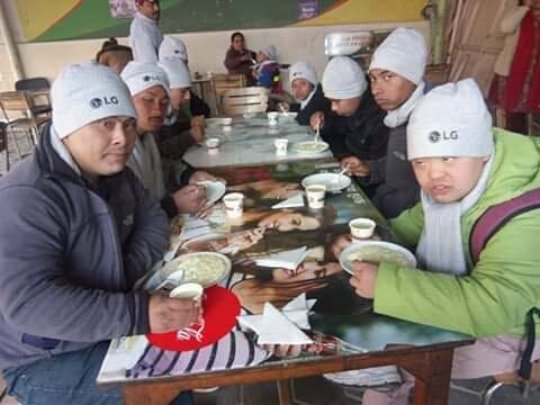 Children and Youth with Disabilities having lunch

Greetings from Nepal! We have raised US $21,261 from 202 donors till now through Global Giving. We want to thank all the donors and well-wishers for supporting us  and we believe that this collaboration will bring greater impact in the lives of Children with Disabilities.

Profit making institutions such as businesses, industries are directed by Nepal Government to spend some of their profits in social events or charity as a corporate social responsibility. Patan CBR has been collaborating with different profit making institutions to organize different events for Children with Disability. Chaudhary Group, invited children and youth with disabilities to one such event. Chaudhary group will feature this event in their magazine. It will also improve brand image.

15 Children and Youth with Disabilities, 5 staffs of Patan CBR and 6 guardians of   YwDs and CwDs visited LG showroom run by Chaudhary Group at Jawalakhel, Patan on December 31, 2018. The show room was decorated nicely. All the children and youth with disabilities as well as the guardians were warmly greeted by staffs and manager of the showroom and served welcome drinks.

In a big LED screen of more than 42 inches, different shows were put on in the request of the children. There were cartoon shows, national anthem and different songs. Children and youth danced to the tunes of the songs. They were very thrilled to see such a big screen and with different shows could be played by just one click. Another good motivational show was shown in which people with disabilities using wheel chair performed daring stunts in swimming pool, in sea and in big ramps. It also featured adult with different types of disabilities performing daring sports and stunts. Children and youth were so motivated to see that disabilities don’t restrict someone from   having adventure.

A big cake was cut and served to all. Children and youth were given carrom board, chess, ludo(Ludo is a strategy board game for two to four players, in which the players race their four tokens from start to finish according to the rolls of a single die). They played to their heart content. Later lunch was served to all. Warm cap and muffler were distributed to children and youth   with disability. Children had lot of entertainment in the event. They were so happy and amused .Later the sports material carrom board, ludo and chess were handed over to Patan CBR.

We thank Chaudhary Group  for organizing such a nice event full of entertainment and good food. Children with Disabilities also need to involve in leisure and sports activities as any other normal people but they get very less opportunity for same. Chaudhary Group had provided that opportunity. It also improved participation of children with disabilities in social activities. It will help in their physical and mental development. This helps to sensitize awareness and acceptance of children with disability in the community. 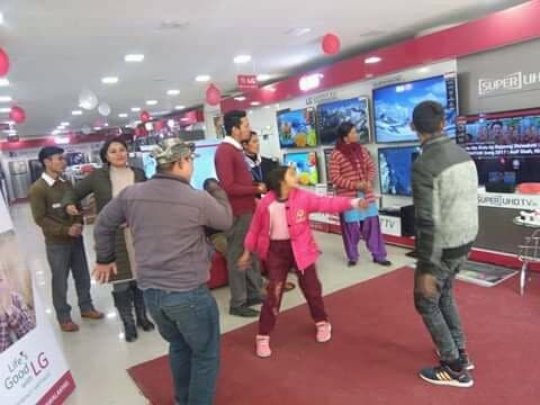 Children and Youth with Disabilities dancing 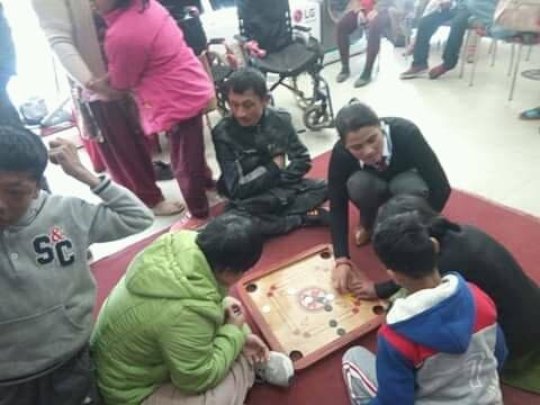 Children and Youth with Disabilities playing
‹ 1 2 3 4 5 6 7 8 9 ... 13 ›
WARNING: Javascript is currently disabled or is not available in your browser. GlobalGiving makes extensive use of Javascript and will not function properly with Javascript disabled. Please enable Javascript and refresh this page.