Being good and tough at the same time? We'll show you the trick! 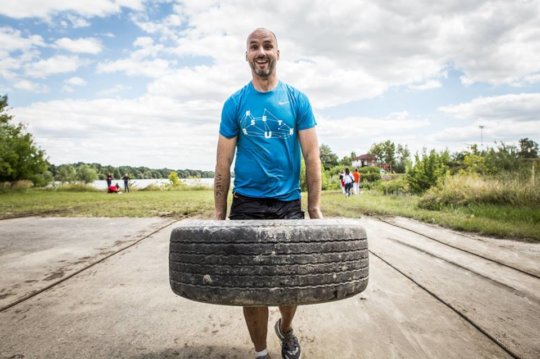 Runners at the Race Tvrdák (Tough Guy) proved that it is possible to be tough and have your heart at the right place at once.

Running through series of hurdles, swimming in ice-cold water and carrying buckets full of stones uphill – these are just some of the hurdles that this year's contestants of the race had to overcome. There is no doubt that creators of the race layout unleashed their creativity when they put together the total of 26 hurdles on 6 kilometers long track.

Even though the race really tests your stamina, for some participants there is more to it than just proving who is the strongest. The race traditionally has its charitable dimension. Participants can choose to donate their starting fee (30 Euros) to a non-profit organization (NGO), which they wish to support. Furthermore, they raise awareness among their friends, family and colleagues about the NGO's mission and activities and why they run to support it. These Tough Guys basically start a fundraising campaign of their own.

At the track, they all received a sticker saying, which organization they run for. Unfortunately the sticker sticked for no longer than few hurdles and then under the weight of mud, cold water and sweat hopelessly flew away.

How did we involve Great Country?

21 men and 15 women attended the race in Bratislava and Košice to support 4 Slovak NGOs, which are part of the "Great Country". Some of the attendants were experienced runners who take part in the race every year and some of them wanted to try something new - stepping out of their comfort zone for a good cause.

In the end, it was all worth the reward. Besides donating their starting fee to an NGO, there was another strong motivation for every Tough Guy. The fastest male and female runner won another 200 Euros for an NGO of their choice. This year, both cathegories were dominated by employees of software company ESET. Fastest Tough Guy and Tough Gal from ESET donated their reward of 200 Euros to project Generácia 3.0, which aspires to bring positive changes in education.

In total, Tough Guys donated an incredible amount of 2200 Euros which they fundraised from their friends and family as well. This contribution was donated to 4 Slovak NGOs from various fields: youth (Mládez ulice), education (Generácia 3.0), socially disadvantaged children (Ulita) and women in IT (AJ TY v IT).

Teaming up with the Tough Guy Race turned out to be a great fundraising opportunity. You can prove your friends and family that if you are willing to withstand this amount of mud, you really take your support of the organization seriously. And if they want to encourage you, they may too become donors of the NGO.

We congratulate to all the Tough Guys and Gals and are looking forward to next year! 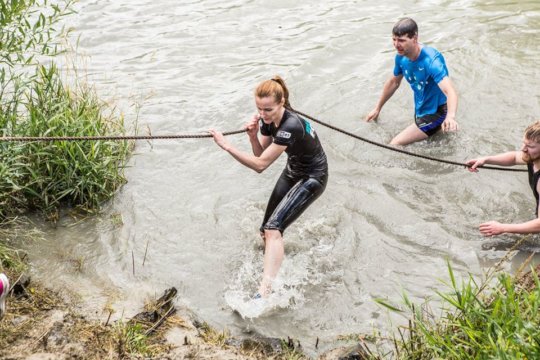 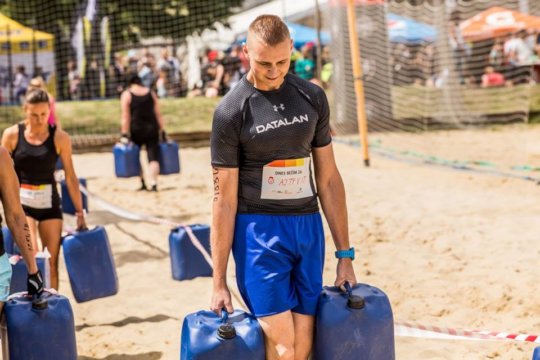 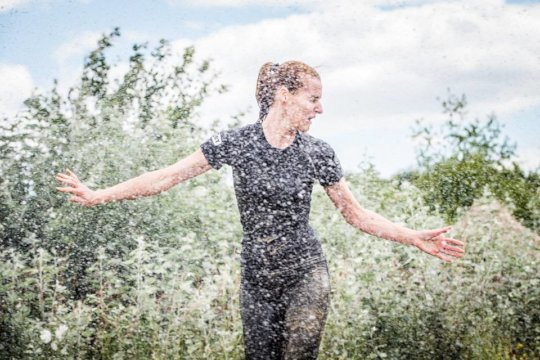 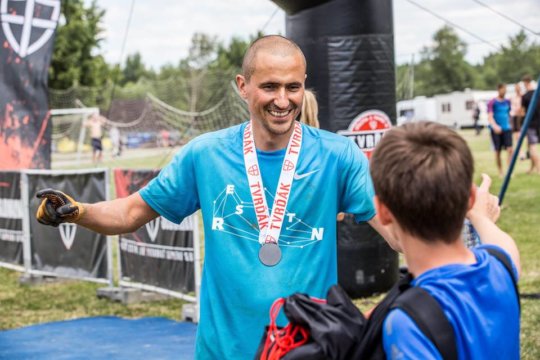 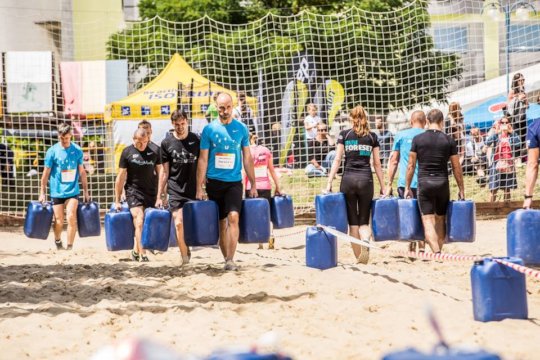 Three biggest highlights in our project 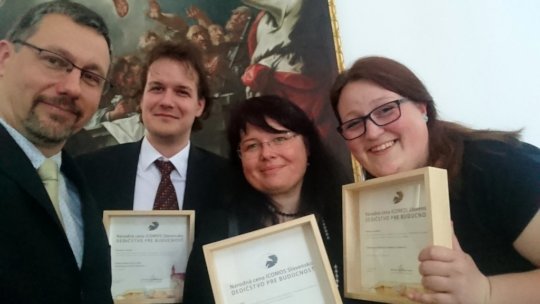 With the summer season gradually approaching, we would like to share three biggest highlights in the life of our project.

In March, more than 100 young volunteers attended our biggest and most important training course, the so-called Main training. This workshop was intended for all young people, who took part in our summer voluntary camps and have shown interest and eagerness to support our project in the next season. The aim of the training was to share the basic knowledge about the history, functioning and processes in our project, help the young people to understand our vision and key values and prepare them for the organization of the project events in the future. The training lasted the whole weekend and was filled with lectures, group discussions, role-plays and practical exercises, which were created in order to develop the organizational, communication and leadership skills of the attendees . At the end of the workshop, the young volunteers also took part in the funny teambuilding activity.
On 20th April, we could experience another highlight - representatives from our project Katarinka attended the award ceremony of the National Committe of ICOMOS (International Committee for Monuments and Sites) Slovakia, that took place at the Bratislava Castle. Our project received nominations in two ICOMOS categories for year 2017. At the ceremony we took home one of the main national awards titled „Heritage For Future for Year 2017“ in the category "Exceptional activity leading to the enhancement of information about the values of the monument fund and the public's awareness of these values“.

The prize was accepted by five members of NGO Katarinka, who represented various generations of the project volunteers - from the founders of the activities in 1994 to the young people, who are currently active in the leadership of the project. The award was dedicated to the hundreds of our volunteers, who took part in the conservation works throughout the years and thus helped to preserve the ruins of the monastery and the church of St. Catherine in safe condition until this day. We are very thankful for the award and regard it as a recognition of our longterm and extensive project activities that aim to save this rare historical and cultural monument for future generations.

Apart from receiving recognition from the professionals, we also experienced one another special highlight in April – the highest attendance of visitors on one of our traditional public events, the so-called White Sunday Pilgrimage. The tradition of the White Sunday pilgrimage dates back to 18th century, when thousand of pilgrims walked from Trnava town through the Carpathian forests up to Katarinka . In 2000, volunteers from our project renewed this tradition and started to organize the pilgrimage again on yearly basis.

The wandering itself began with the arrival of the train with the pilgrims at the station in Bukova and the iintroductiory word from of the organizers. More than 200 people walked through the Carpathian forests from Buková railway station and more than 300 visitors joined the event on the spot. The pilgrims were joined also by the Bishop of the Archdiocese of Bratislava Jozef Halko, who walked with them the full length of the route. The highlight of the program was the holy mass celebrated in the ruins of the Church of St. Catherine, which was attended by more than 500 pilgrims altogether. Apart from the bishop Halko, who was the main celebrant, the mass was joined also by several other priests who are close to the Katarinka project - Ondrej Chrvala, Miroslav Kovác, Ludovít Kubán, Jesuit Martin Halcak, Dominican Bartolomej Vladimir Hurnanský, Matej Juraj Šulík and Franciscan priest Zenius Félix-Mária Ziška. Many visitors, especially families with small children, enjoyed of the pleasant weather, stayed in the surroundings of Katarinka and spent there a pleasent afternoon. 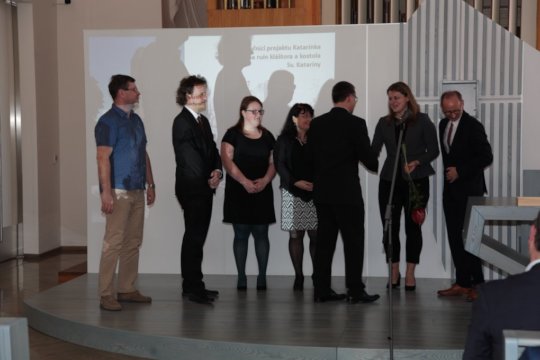 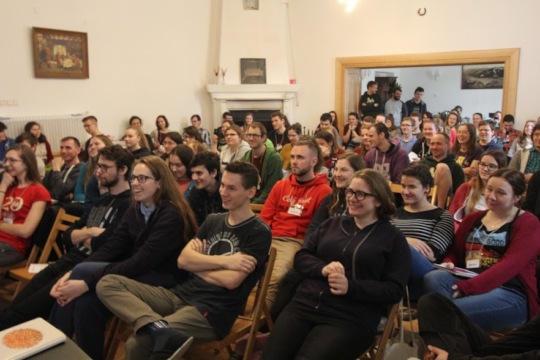 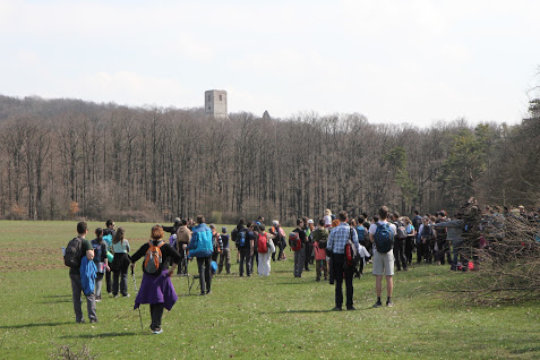 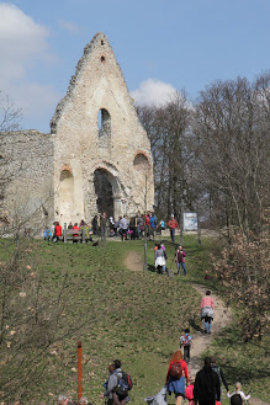 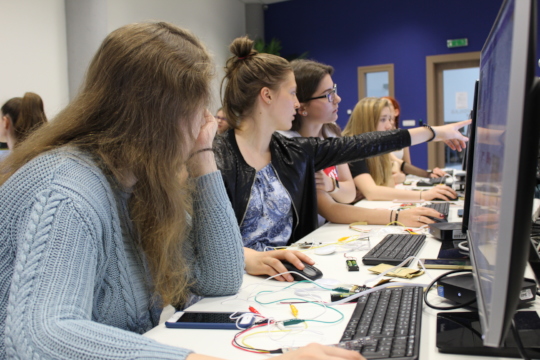 In the age of 12 to 16 year, the girls are very sensitives and start to create their first ideas about the life and their professional orientation. Wanted to influence their choice of extra school activities and specially our willingness to bring them into STEM fields, leaded us to start our project of Coding Academy. Coding Academy is based on physical computing, the methodology which we consider as important tool how to motivated them. Using micro:bites, girls can create their own models, “products”, they can instantly see results of procedures they are doing. Coding Academy is based on strong work with school teachers, because well-educated teacher can help us to educate more girls.

Girl’s Day in Slovakia happened fifth time this year! Under the patronage of Slovak president Mr. Andrej Kiska and Slovak representation of UNESCO office, more then 900 high school girls visited 45 technical companies, universities and institutions, specially oriented towards ICT. The photo contest covering the topic “My best IT day” showed us how girls perceive this day and what is the most attractive thing for them. Best photos were awarded by Ambassador of United States in Slovakia.

New educative projects for mature women answered the problem with lack of IT professionals in the field of Software testing and Data Analyses in Slovakia. Women Tester Academy and Women Data Academy bring the new opportunity for the women with non-technical background, wanted to skip into IT. We are looking for women strongly motivated into this change. After Academy accomplishment, we put them into the contact with companies looking for those profiles. The lessons take 50 hours during two months, where women need physically participate. International certification ISTQB is the conclusion of Tester Academy, for Data Academy the accomplishment are three different case studies done. Like this, we could place into companies 80% of women participated at Women Tester Academy 1. 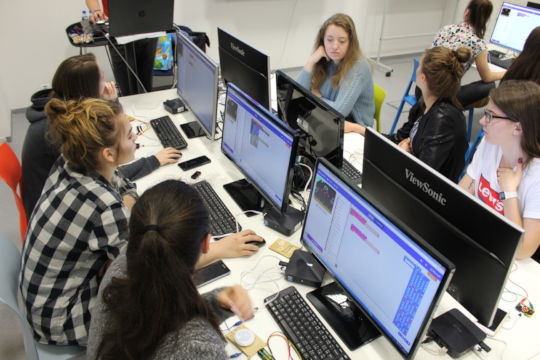 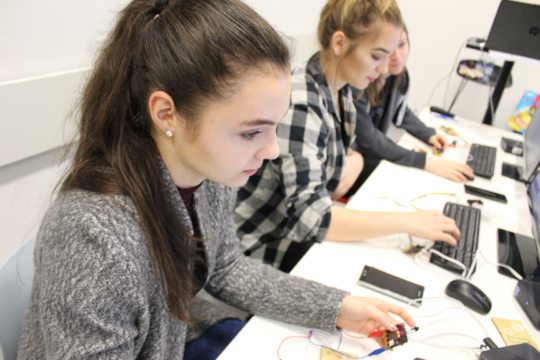 ‹ 1 ... 6 7 8 9 10 11 12 13 ... 30 ›
WARNING: Javascript is currently disabled or is not available in your browser. GlobalGiving makes extensive use of Javascript and will not function properly with Javascript disabled. Please enable Javascript and refresh this page.