Katarinka monastery is prepared for the winter 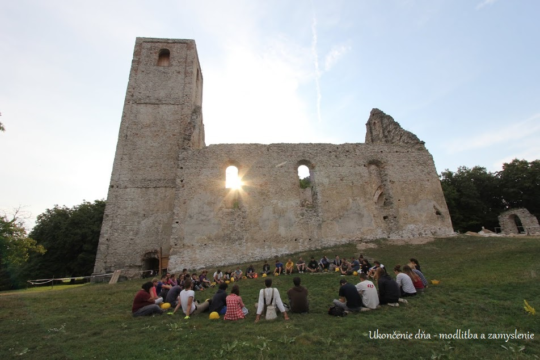 Katarinka and the volunteers together

The nature is slowly preparing itself for winter time and so is Katarínka – after very vivid summer, the fall came to be more calm, to finish the necessary works and to pack everything up for next season. From September to November, few events were organised to pack the camp, tents, and kitchen, finish each restoration sites. Everything needed to be packed and deposited in near village or in the roofed tower for next year.

This tower, 30m high, had being reconstructed to be an observatory one since 2010. This year, we finished wooden railing and installed 2 iron stairs to rich the top of the tower. This reconstruction was made according to original arrangement of the tower with addition of this iron stairs to the top with agreement of experts we cooperate with. From spring 2017 it will be opened for visitors as well.

Of course, another point of these events was to meet up again, be with friends, share some time together, empower relations we created during summer. And to celebrate what has been managed this season and to celebrate our patron St. Katarina from Alexandria, we had a great ball, thanked our supporters, had fun together and enjoyed the night. 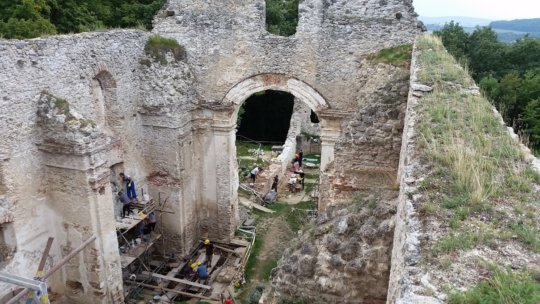 Finishing on the working spots 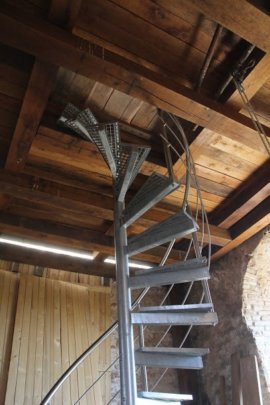 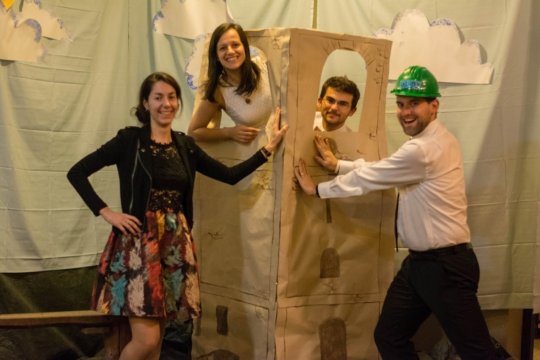 Our volunteers at the ball with model of Katarinka
Nov 23, 2016 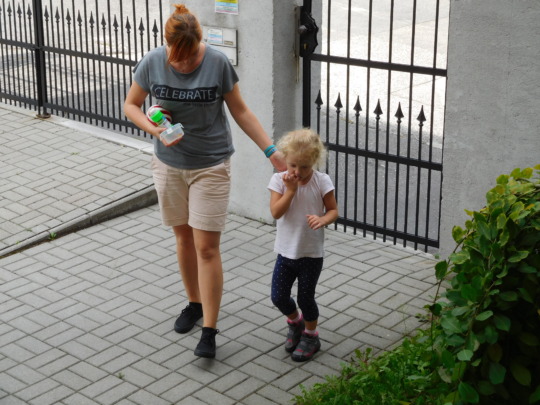 Coming back from a trip with Miska

In August 2016 Autistic Centre Andreas organized day camps for children with autism again. At the camp we had six children, each of them had their therapist. This is mainly because most children were from the external environment. Camp lasted five days, which is a really short time for exploring, but it is the time needed for parents to relax. Immediately after the camp we asked parents if they would like a two-week camp next year. Camp is financed mainly through project "For parents, without parents", and that means thanks to you, our donors. Thank you very much.

Lets look at the experencie through the eyes of our logopedics doctor Gabrielle. For her it was the first summer camp in our center.
"The first day on Monday, we were getting to know each other with Miška. We were in the therapeutic room in which Miška has regular therapy. Since she's been in the room he knew, she helped me discover what toys are hiding there. While Miska picked those toys, I named them and I've watched her play. Later, we made a little trip with other children to the monument on the nearby hills.

On Tuesday morning Miška brought her new friend the Bear to the center. It was almost as big as herself. Since the Bear was the main subject of fun and we had a prearranged plan for the day it had to come with us to see the park. In the forest park there were surprisingly many children. Miška just stood there and watched what was happening around. On the way back she was really tired and fell asleep immediately after lunch.

On Wednesday we went to firefighters station. Miška enjoyed the trip on trolley. Watching the road traffic and passing people interested her a lot. Of course the Bear was there to see it. She tried everything at the station. She even allowed firefighters to ride her on sliding platform. While we waited for the trolley Miška gave me first hug.

On Thursday we visited the zoo. Lion and tiger was her favorite animals there. When we returned back to Andreas I taught her how to do "Tap, Tap Tapuška" a nic game for kids. We were laughing and made eye contact.

The last day was divided into several activities. First we were in the garden where we were jumping on a trampoline and swung on a swing. Then we painted a painting with all the other children from camp. We ended the day on obstacle course in the gym, which she passed quickly. Finally, like all other children she ended up in a ball pool. " 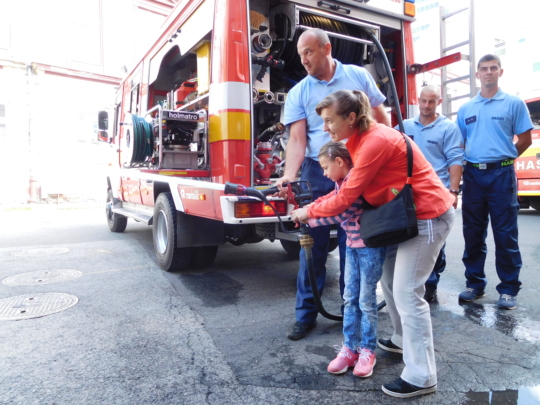 At the firefighters station 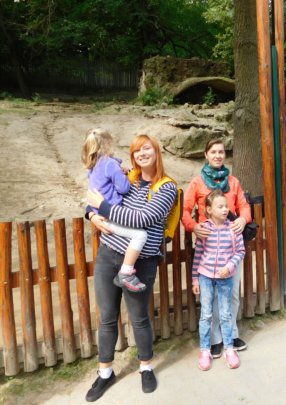 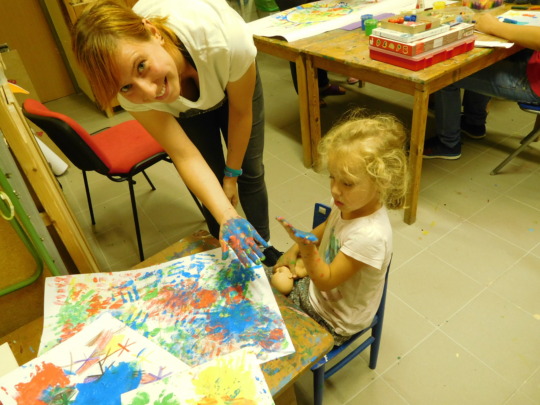 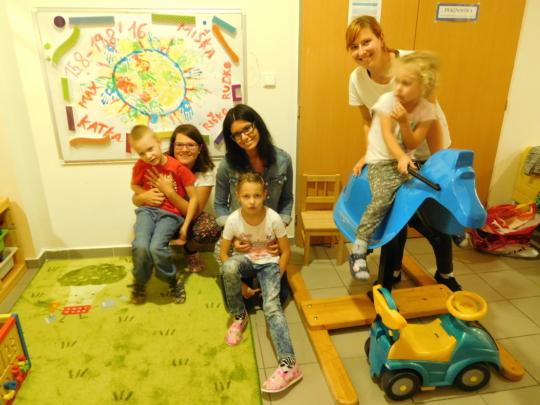 You should live in a family, after you are born 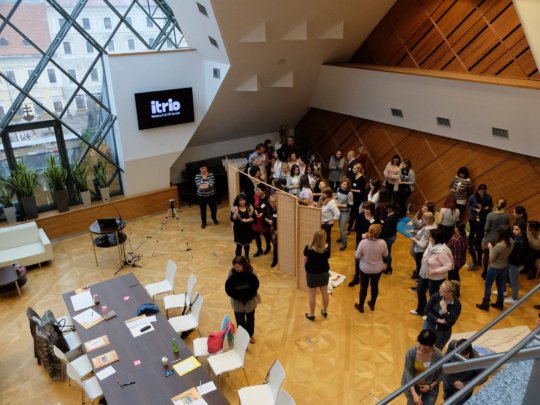 In Slovakia we currently have relatively well developed childcare system for kids without parents. The institutional care system has improved for decades, but it is regrettable that the "door" to it (in institutional care) is really wide open in Slovakia. The prevention in this area (everything before the "door") has still many shortcomings and reserves.

Therefore we arranged meeting in Banska Bystrica with 80 experts in social work, psychology, health and other helping professions, along with male and female students and the general public. They discussed how to build services to support pregnant women and parents with young children from vulnerable groups and to alleviate early-traumatized children after separation. Because it has negative impact on child development. It was proven by scientific research and the World Health Organization considers it as a first violence against a child.

Twelve guests from non-governmental organizations, local authorities and child care institutions presented their stories and experiences in preventing child abandonment and removal. They testify that helping abandoned children in the first days of life does not stand on major projects, but rather on the sensibility of those who are near them.
The protection of children is not and can not be only in the hands of state institutions. Vulnerable children now need the interest of he whole society.

Thank you, that this issue touched you and you help us work towards ensuring that children are not left in early childhood without their relational person. 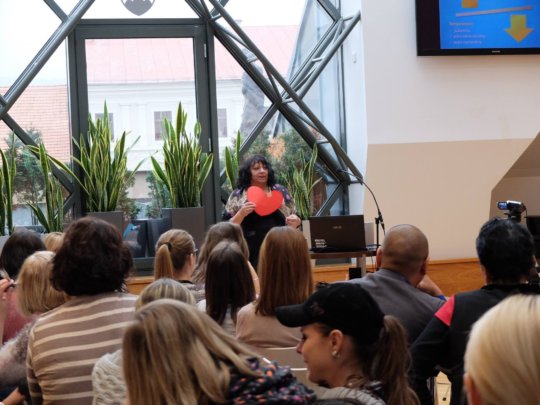 Child care needs a lot of hearth
‹ 1 ... 38 39 40 41 42 43 44 45 ... 70 ›
WARNING: Javascript is currently disabled or is not available in your browser. GlobalGiving makes extensive use of Javascript and will not function properly with Javascript disabled. Please enable Javascript and refresh this page.