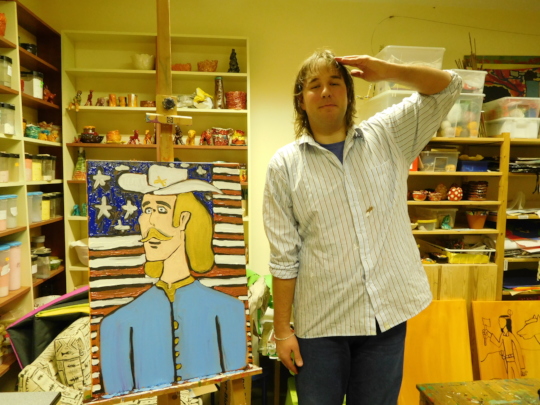 During their stay at Andreas Autism center we offer children and young adults with autism all kinds of therapy and leisure activities. Lukáš’ favorite are art therapy and music therapy.

Lukáš is a young man who celebrated his 27th birthday this June. He was diagnosed with atypical autism before the age of three. He would not talk and he appeared as if he was not hearing. He enjoyed stereotypes and his favorite pastime was spinning the wheels on an inverted bicycle. When he was five, he started drawing his first pictures. The drawings were simple at first, mere stick figures on which he learned to add the eyes, ears and nose. Through drawing pictures, he eventually started talking. He formed first sentences at the age of seven. His art was improving. Mostly, he enjoyed drawing cartoons of Tom and Jerry, or Spider-Man with a regular pencil. Although he would typically draw the same figures, he always captured a different facial expression. Only when he was satisfied with the outline would he proceed to finish the picture with color pencils.

When Lukáš was twelve, he started attending art therapy in Andreas Autism center. It was here where he began to paint on canvas with a brush and forged his own style. He really likes to mix colors to achieve just the right shades. He always arrives with a clear idea of what he wants to draw. Him and his therapist have a unique connection. Often, she only has to think what Lukáš could still add to the picture, and he starts painting it without her ever saying a word.

Lukáš loves traveling. Upon return, he records his experiences on the canvas. Paintings from his adventures include the Big Ben, the Eiffel Tower or the Statue of Liberty. He enjoys portraying faces of different ethnicities and attire – the Scotts or Mexicans among others, but also political figures such as Abraham Lincoln, Winston Churchill and Barack Obama. Currently, he mostly draws my dog and the Christmas holidays. All from the top of his head. If he goes to a concert and takes interest in a singer, he crafts a portrait of her during the next therapy session.

Lukáš also likes to communicate. In his own way, he keeps track of all social happening. He proudly casted his votes twice for presidential candidates. He understands political elections well. Although after the first round, he could not understand that a female can also become president. He learned and remembered that presidents were always male and took that for granted. Today he knows well enough (among many other people in our society) that a woman can represent a country as well as any man. And so to this day, there are three paintingshung on the walls of Andreas portrayingthe president of the Slovak Republic, Zuzana Caputová.

Lukáš typically presents himself in blue attire – blue t-shirt or shirt and jeans. Jacket and bag are blue by default as well. Lukáš is also good at skiing and horseback riding. When he paints his portraits, he talks to his characters and depending on his mood, adds wings or hearts. It is a great pleasure working with him!

Written by Lucia, sister of Lukáš

Project is managed by organization Andreas whose project ‘For parents without parents’ provides various leisure activities for people with autism. One hour of art therapy costs 10 euros. Many thanks for all your contributions. 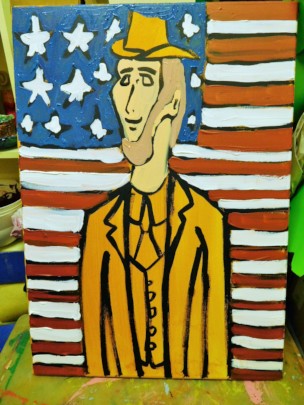 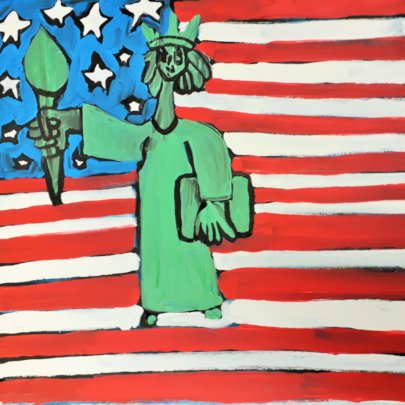 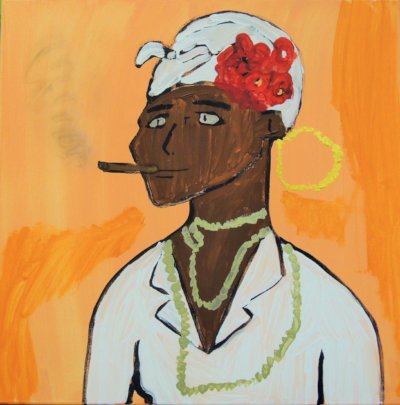 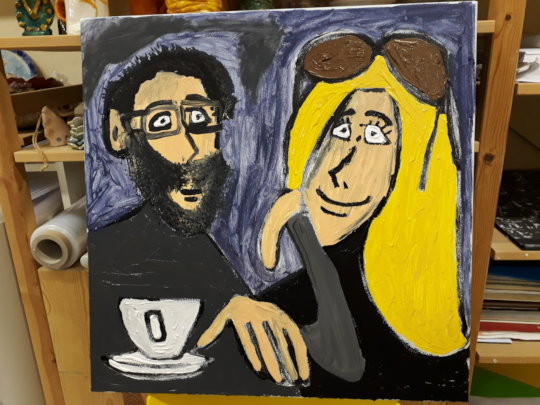 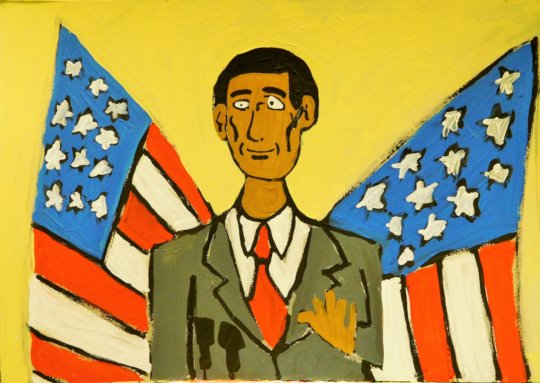 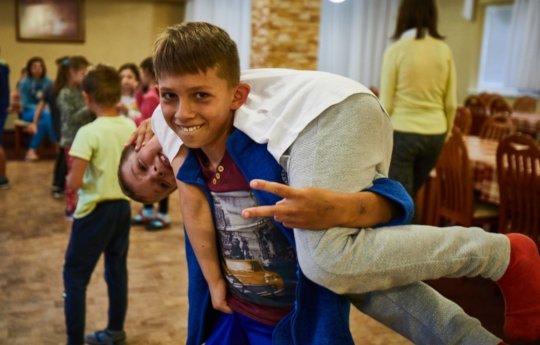 This year thanks to support of many people and institutions we were able to organize 10th Therapeutic summer camp for children and young people after the loss of their close relative. From 14th till 21st of July, 2019 in Lubietová 41 children from all over Slovakia attended the camp activities led by team of ten professionals (therapists and psychologists) and trained volunteers. Through the theme "Treasure Mountain“ we tried to help children and adolescents in their bereavement process.

We have the mountain inside and treasures that enriched us and we can share with others. Games, creative activities, trips and therapeutic sharing during the camp helped children discovered their own treasure mountain. In the pictures below they decided to create for us and our donors, maybe you can find inspiration for your own life. In this way we help each other and grow together.

We are pleased to be able to publish these pictures that demonstrate wisdom and inner transformation of many children and give us a lot of satisfaction.

This project is managed by Plamienok. Thank you for keeping up with us! 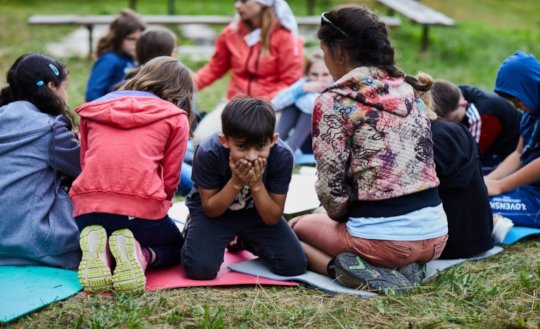 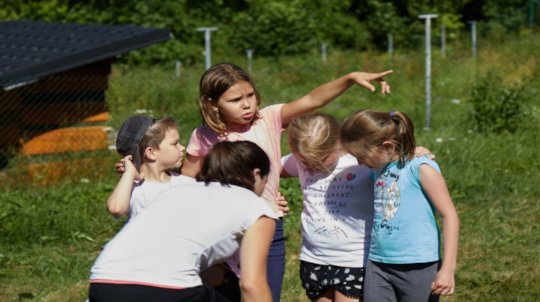 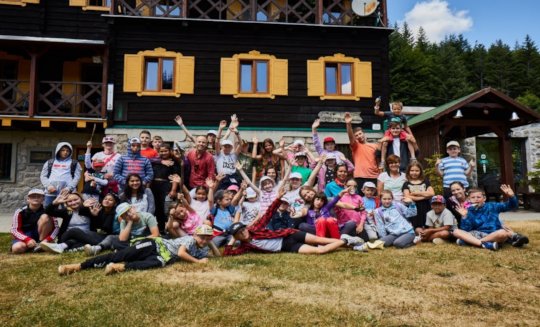 Summer in the monastery 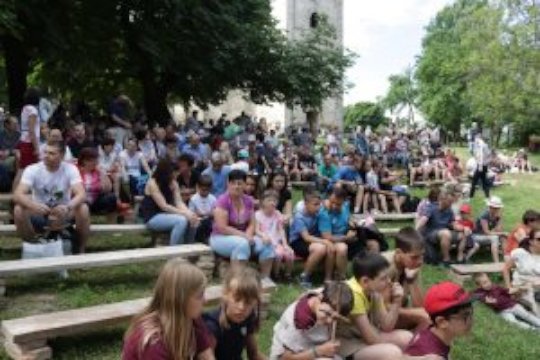 We succesfully finish another great summer season at Katarinka. The start of summer was marked with an amazing Open Doors Day. Our biggest public event attracted more than 1400 visitors, who came to the Church and Monastery of St Catherine to enjoy the pleasant atmosphere and unique program prepared by our volunteers, as there is special occasion we wanted to celebrate - we are celebrating the 25th anniversary of our voluntary project this year. With the aim of marking this extraodrinary milestone, we offered the tourists and visitors many ineresting activities connected to the history of our project and also some trivia and also facts about our day-to-day voluntary work. We believe everyone has had a n amayzing time and enjoyed the celebrations.

During July and August, we welcomed new young volunteers participated in the two-week volunteer camps, which are the highlights of our season. We managed to organize four summer workshops and each of them awas attended by 35 – 40 volunteers. The volunteer camps are typical for their simple lifestyle – we stay in the heart of nature and for two weeks live without electricity, cell phones or any other technical devices. The volunteers actively take part in voluntary work with the goal of preserving the ruins of the Church and Monastery of St Catherine – this includes conservation and reconstruction of the old ruins and also archeological research on the site. This summer, we were able to finalise the reconstruction of an old crypt and also finish works on the most damaged parts of the monastery. Apart from voluntary work, the participants could enjoy historically themed adventurous activities, fun, joy and a lot of laughter – we had a very positive feedback, therefore we hope to see many of the young faces of our summer volunteers also in next summer season, as they were eager to join our project and help in our longterm activities.

This year we keep our tradition of participating in the Slovak nation-wide public event „Night of castles and ruins“. The initiative is set up by the NGO Save the Castles – an organisation, that associates 28 organizations from Slovakia which are responsible for the reconstruction and rescue of ruins of castles and sacral buildings.The main goal of the mentioned event is to present the national and cultural monuments and bring them to public attention. The event, which regularly involves many castles and ruins from all over Slovakia, took place on August 17, 2019.

As usual, Katarinka also opened to public on this night and prepared an extraordinary program - it started with a holy mass celebrated at the sunset and was followed by short break and small refreshment offered by the volunteers from Katarinka. There was also possibility to enjoy the ruins which were lighted especially for the occasion. The highlight of the evening was the concert of the Chamber Orchestra ZOE, which was performed under the stars. As a surprise at the end of the event, we opened the newly reconstructed crypt for public for the first time, so the visitors could go inside and see the interior of it. We hope that everyone, who visited Katarinka this summer – as tourist, volunteer or organizer of an event – enjoyed its pleasant atmosphere to the fullest. 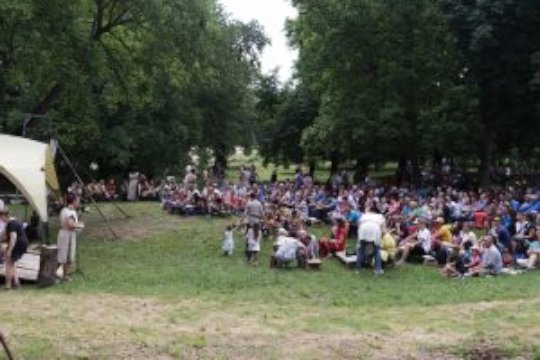 ‹ 1 2 3 4 5 6 7 8 9 ... 70 ›
WARNING: Javascript is currently disabled or is not available in your browser. GlobalGiving makes extensive use of Javascript and will not function properly with Javascript disabled. Please enable Javascript and refresh this page.