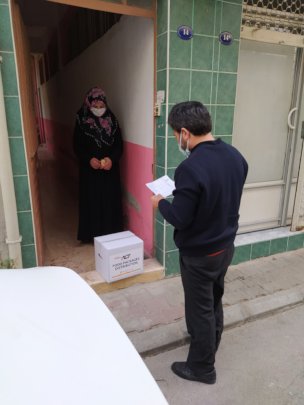 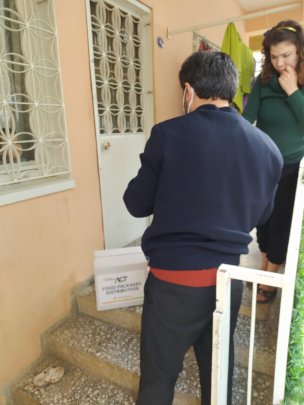 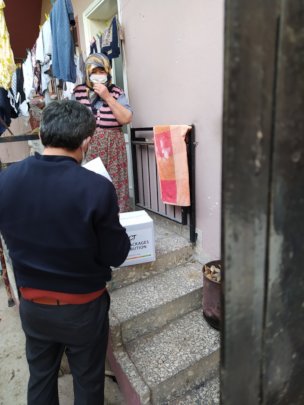 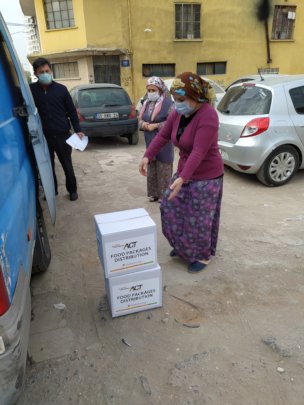 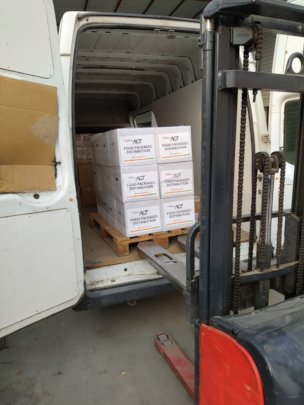 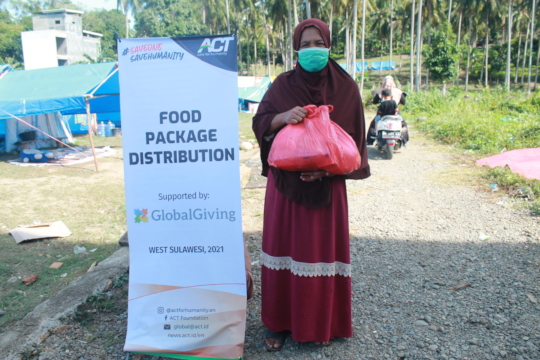 I am reaching you today to updates our response on the Sulawaesi's earthquake that occured in January 15th, 2021.

An earthquake struck Majene Regency in the province of West Sulawesi, on the Indonesian island of Sulawesi on 15 January 2021, at 02:28 WITA (18:28 UTC), with a moment magnitude of 6.2. This earthquake was felt as far away as Makassar, the capital of South Sulawesi, and Palu in Central Sulawesi. Strong shaking was reported in Majene and the provincial capital Mamuju for at least 5-7 seconds. It was preceded by a foreshock measuring 5.7 magnitude a few hours earlier.

Widespread damage was reported throughout 4 out of 5 regencies in the province. More than 6,000 structures were damaged or destroyed in region. Officials estimated that the earthquake caused damages amounting to Rp829.1 billion rupiah.At least 105 people were confirmed dead and more than 3,300 were injured, while thousands of residents were displaced due to the quake. An aftershock struck on 3 February 2021, killing a man and causing further damage.

Severe damage was reported across Majene Regency and in several areas in Mamuju Regency. West Sulawesi's Gubernatorial Building, which was located in West Sulawesi's capital Mamuju, was destroyed in the earthquake. Two people were reportedly trapped beneath the ruins.Parts of Hotel Maleo in Mamuju also reportedly collapsed. Meanwhile, a section of Mirta Manakarra Hospital, a main hospital in Majene also collapsed, trapping at least 6 people inside. Mamuju's main hospital also reportedly suffered extensive damage, with 50% of its structure damaged by the earthquake. Hundreds of patients had to be treated outside of the hospital due to fear of collapse.

The Mamuju penitentiary facility suffered damage as well, injuring at least 3 people. The perimeter fence of the penitentiary was reportedly destroyed. At least one Community Health Centre (Puskesmas) was destroyed in the earthquake. A military district office in Malunda was also severely damaged. At least two main hospitals in West Sulawesi were destroyed in the earthquake, while three hospitals remain operational. Further assessment revealed that three Community Health Centres had been destroyed by the earthquake.

A preliminary assessment revealed that the quake caused damage amounting to more than Rp821.9 billion rupiah. Damage in Majene Regency was estimated to be as high as Rp449.8 billion rupiah while in Mamuju, damages of Rp379.3 billion rupiah were inflicted. The assessment stated that more than 7,000 homes, 21 health facilities and numerous structures including a supermarket, a harbour and public offices were damaged or destroyed by the quake.

One of beneficairies expressed his happiness  and said that thousand thank to donors who support him and others at this difficult condition and he and other survivors still unable to start the daily life just before the earthquake. Your generousity is so meaningful for the survivors. 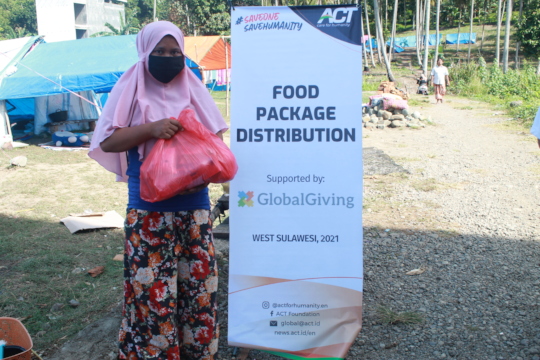 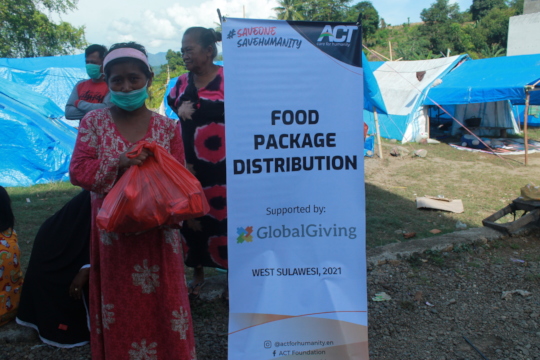 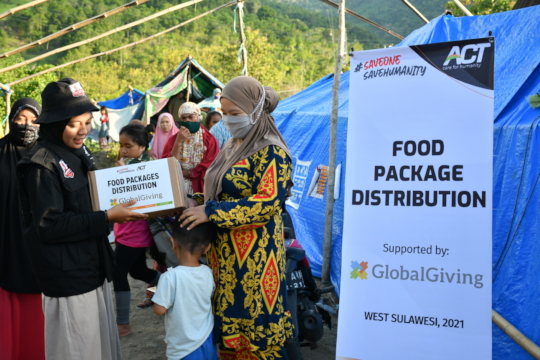 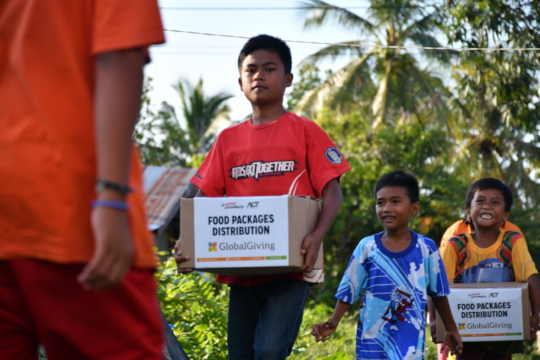 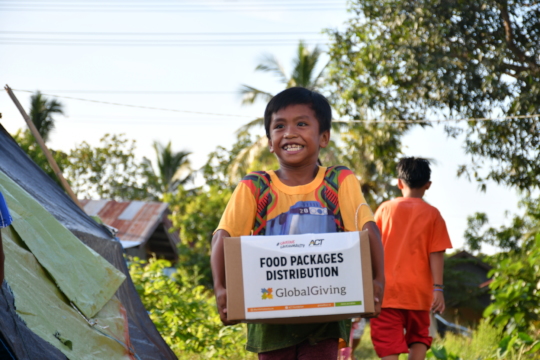 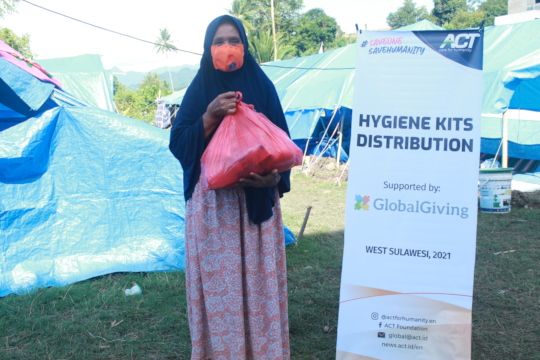 It has been more than one year, every country across the globe face the Covid-19 and millions of live have been passed away, and there are million unemployment numbers and face the difficulty in "new-life". Indonesia is one of the country in the world which is struggling hard to stop, to localize the outbreak because the Covid-19 has been affected to all sectors in Indonesia and the new variant of virus also exist in Indonesia. ACT Foundation as a non profit organization must not stop to distribute the humanitarian aid for the affected community in Indonesia.

In Indonesia, natural disasters occured frequently during the outbreak and the situation more difficult for vulnerable families to face daily life. The latest earthquake occured last January 15th, 2021 and ACT Foundation have been involved to distriubute the Covid-19 aid program for survivors.

The beneficiaries highly thank to GlobalGiving donors across the globe who generously support them at difficult time (natural disasters and the Covid-19).  Finally, all of your contribution really direct for the Indonesian community and we hope that the Covid-19 could end soon. Stay safe and healhty.... 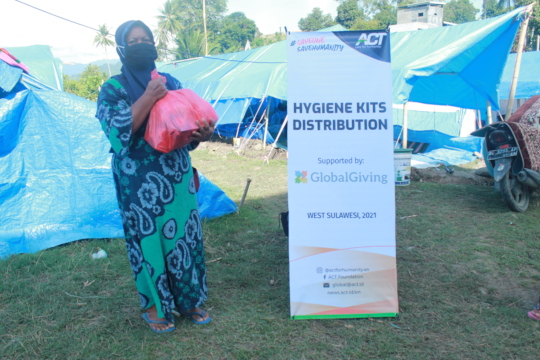 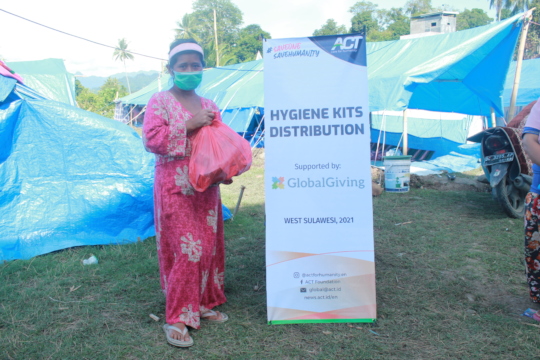 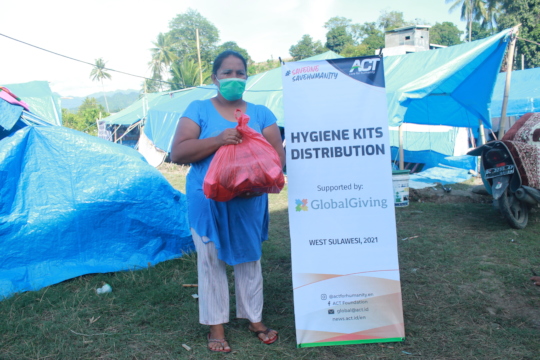 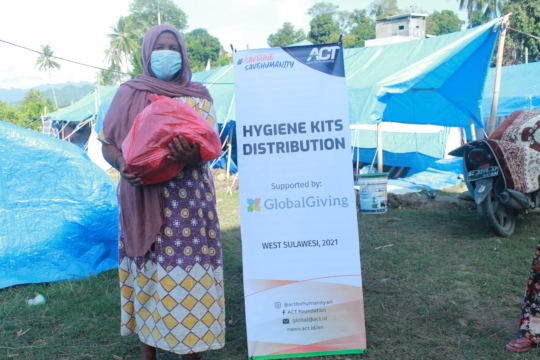 1 2 3 4 5 6 7 8 9 ... 14 ›
WARNING: Javascript is currently disabled or is not available in your browser. GlobalGiving makes extensive use of Javascript and will not function properly with Javascript disabled. Please enable Javascript and refresh this page.