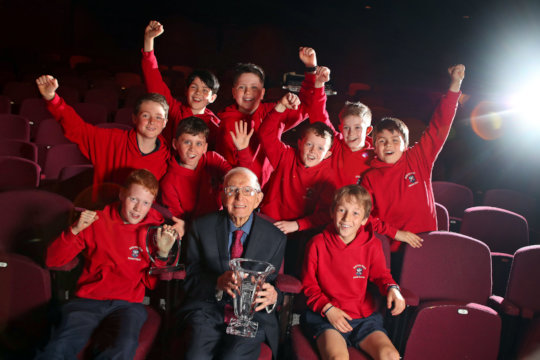 95 year-old Florence McGillicuddy from Rathfarnham, in Dublin, is the overall Age Action Silver Surfer Award winner of 2019.  Florence who blogs on GrandadOnline.com was presented with his award in recognition of his contribution to community life through his use of technology, at a ceremony on 28 May in Dublin City University, who co-sponsored the Awards as part of the DCU Age-Friendly University Initiative. This year celebrated the 10th Anniversary of the Silver Surfer Awards which raise awareness of the importance of digital literacy amongst the older population. The full list of winners is available here.

Florence, who also won the Golden IT Award as one of the older nominees, has developed a unique relationship with the children in the local Ballyroan Boys’ School over the past three years through the internet. Florence brings history to life for the young students as he researches historic facts about their city and composes the lesson in an email which the children’s teacher helps the students read. The students have learned about what life was like in Dublin when Florence was growing up and events such as what happened to Nelson’s Pillar, an airplane crash in Terenure, and he even organises school tours to cigarette factories. In turn, the children will write back to Florence in old fashioned handwritten letter format which is a wonderful display of generations coming together and learning from each other.

Getting Started IT Award winner Eleanor Lynch from Cork was profoundly deaf from the age of 40 to mid 60’s but 14 years ago, thanks to advances in medicine and technology, she had a cochlear implant operation. When she was “switched on” Eleanor had to learn how to hear again with the assistance of this new technology.  It took lots of perseverance, but she mastered it and can now communicate fairly easily. After she mastered the implant technology, she had the confidence to learn how to use a mobile phone and now uses a smart phone like a teenager! The laptop has made living alone a lot easier as she does her all banking and pays all her bills online and does not have to go out on wet cold days. Technology and her own bravery and determination has made an amazing difference to Eleanor’s life.

Community Champion Award winner Margaret Culloty from Firies Co Kerry is 77 years of age and is the County Secretary of Kerry Community Games for the past 23 years. As the National Community Games requires that all participating children be registered online, Margaret has had to learn how to do this for over 3000 children participating in sporting and cultural events at county level.

Margaret faced this challenge with vigour and is now responsible for the coordination of the online Kerry registration system ensuring that all children are registered for their individual or team events at local and National level as well as getting a web page up and running and a Facebook account. She has been described as one in a million and didn't let new technology put her out of the position of County Secretary.

Hobbies on the Net Award winners Paddy McAuliffe, Paddy Tobin and Paddy Buckley are ‘The 3 Paddy’s’ from Mallow in Co. Cork who learned how to shoot and edit short films, a skill they are now using to preserve a legacy of memories for peoples’ families to be passed on to future generations. They are documenting the memories of older people in their community, editing in photos or the person’s life and locality, to produce a film. The film covers the person’s life story which can then be shared digitally with the wider community and family members.  To date they have recorded the life stories of almost 30 older people in the region.

IT Tutor of the Year Award winner Sr. Margaret is a Sister of Mercy who worked as a principal nurse tutor for 14 years at the Mercy Hospital in Cork.   Following this she trained as an addiction counsellor in MN, USA. She founded Tabor Lodge - a treatment centre in Cork for persons with alcohol, drug and gambling addictions and it was here that she first saw the need for a computerised system.   Following a few lessons she mastered the PC.   Sr. Margaret observed that a number of staff and residents were struggling using smart phones and computers. She sourced funding for a tutor and initially she ran 10 four-week classes with 8 students per class. She is now a volunteer tutor with Age Action and manages the attendance records and presents certificates at the end of the courses.

Schools IT Tutor of the Year Award went to the students of the Transition Year class in Bandon Grammar School who have been tutoring older learners how to get online. At every lesson, the young TY students teach their older learners something new from how to use Google Maps to downloading music, looking up Government websites which are all sites of great relevance and interest to the learners.

The intergenerational nature of the class creates an energetic atmosphere in which to learn. People have remarked that the school break-time is a favourite where the older learners and younger tutors engage in conversation and swap stories

Winter is finally coming to an end and Age Action’s Care & Repair volunteers are busy calling to older people who would like to have their garden tidied up for the spring time.As we grow older and begin to lose mobility the garden is often the first thing that people struggle with. There are many older people who a huge interest in gardening and have kept their garden in pristine condition all their lives. Suddenly they find themselves unable to manage it. It becomes a source of great sadness when they see it begin to run wild.Care & Repair volunteers are happy to help! Every From March to October each year they do countless garden tidy ups. Weeding, sweeping, pruning, cutting, cleanig are just some of the jobs we do.The older people who call us can’t praise the Care & Repair team highly enough. So often we receive calls and letters saying how happy it makes them to be able to sit in the garden again or even just to look out the window with pride.This is what Care & Repair is all about. Helping people with simple tasks that we take for granted, but that can mean so much once we can’t do them anymore.

This year we are celebrating the 10th anniversary of the Silver Surfer Awards.  Age Action in association with DCU Age Friendly University are searching for Ireland’s top Silver Surfers. The Awards celebrate and showcase older peoples’ use of the internet and technology.

We are calling on people across Ireland to nominate a friend, neighbour or relative who uses technology for pleasure or as a way to enhance the quality of their life.

The winners of the Age Action Silver Surfer Awards will be announced at an awards ceremony on Tuesday 28 May 2019 at The Helix Theatre, DCU, Dublin 9