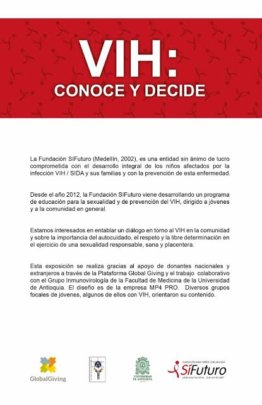 SiFuturo Foundation (Medellín, 2002), is a non-profit organization committed with the integral development of children with HIV and their families and the prevention of this disease.

Since 2012, SiFuturo Foundation has been working on an education program about sexuality and HIV prevention, aimed to young people and general public.

We are interested in establishing a dialogue about HIV among the community on the relevance of selfcare, respect and free choice of healthy, pleasant and responsible sexuality.

This exhibition has been developed thanks to national and international donors, through GlobalGiving, and the colaborative work of the Immunovirology Group at the Faculty of Medicine of the University of Antioquia. MP4 PRO designed this exhibition.  Several focus group of young people, some of them with HIV,gave us their suggestions about the contents of the exhibition.

The first photo:  "It all started when we decided to hunt them"

The origin of the Human Immunodeficiency Virus goes back to the beginning of the 20th century in central Africa, specifically in the region known today as Kinshasa, capital of the Democratic Republic of the Congo.

The initial infection occurred by transmission of the simian virus to humans, probably by direct contact with contaminated blood or tissues during hunting or handling of meat. Later, the spread of the virus was facilitated by the mobility of the population.

The first people who developed AIDS were men, detected in 1981 in Los Angeles, United States. The infection quickly spread, and since then more than 37 million people have died; at the end of the 2015, close to 36 million people were living with HIV around the world. 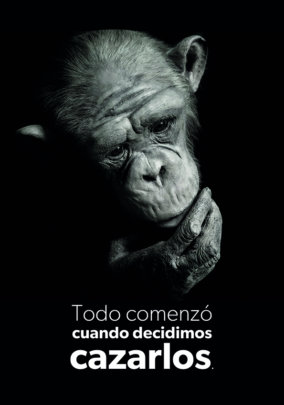 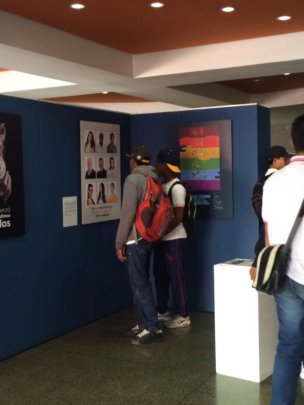 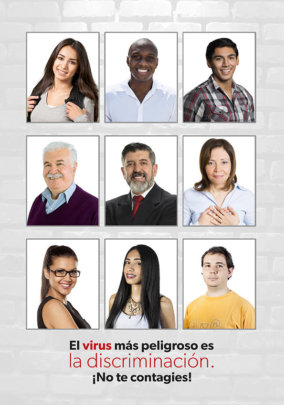 Discrimination: the most dangerous virus
Aug 23, 2016 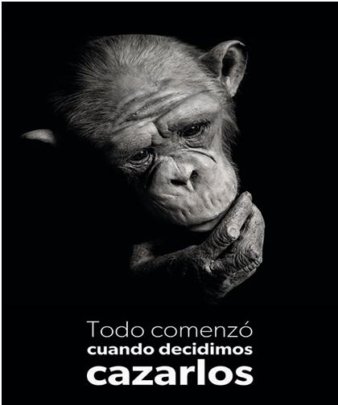 Between the 8th and the 23th of September 2016, a photo exhibition will be displayed “VIH, CONOCE Y DECIDE” (HIV, KNOW AND DECIDE), at the research headquarters of the “Universidad de Antioquia”. This art display includes 12 conceptual pictures taken by the audiovisual agency “MP4” with guidance from focus groups of people living with HIV and the Board of the SiFuturo Foundation.

The photos will be exhibited along with educational texts. The first photo of the exhibition and its corresponding text is attached. As of September 8, we will make a daily delivery of this exhibition. We seek to educate citizens on the importance of adopting self-care practices associated with a responsible sexuality. The expected public for this exhibition includes at least 500 high school students and an undefined number of college students. This exhibition will continue traveling to different educational institutions for supporting the workshops that we are currently doing.

In addition, we now have an open call for artists for two-dimensional works of art, which closes September 30th. The finalists and winners, will be exhibited from December 1 at the headquarters of the library of “Comfenalco” in Medellin. Promotional poster is attached.

To date, 690 adolescents, from 8 different educational institutions have been sensitized with workshops, strengthening their ability for taking decisions, with an emphasis on self-care and in a free, pleasant and responsible sexuality.

We enclose the testimonial video of one of them. For educational activities, we deliver a brochure with academic information regarding HIV/AIDS as teaching material that is distributed during the workshops at high schools, also at universities and different places where the message for HIV/AIDS prevention can be brought.

The Foundation has also continuous updating its educational blog (http: coconoceydecideaprendiendodelvih.wordpress.com) with at least 22 new entries since the beginning of the project. During the 2016 has received 1703 visits, 64 % from Colombia and the rest from 35 different countries. 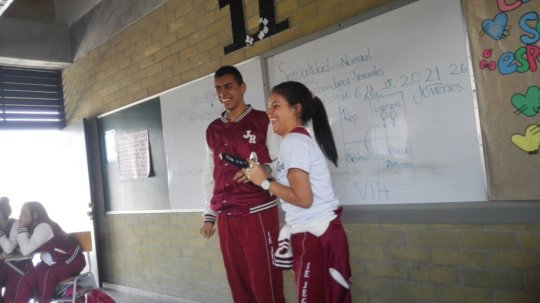 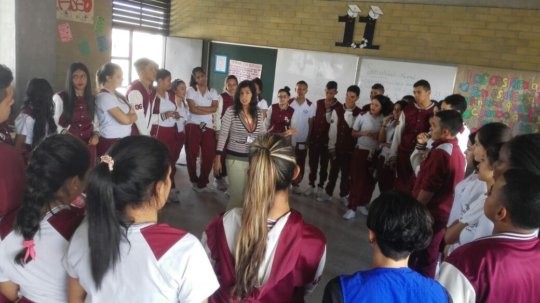 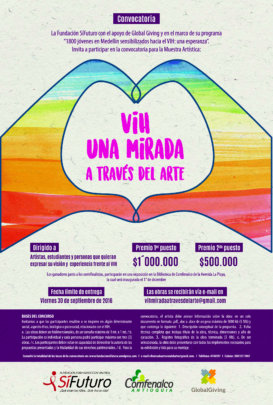 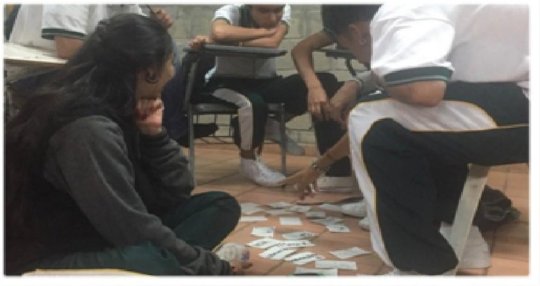 Through workshops of sensitization and reflection, at date, 430 young people from educational institutions and other community-based organizations in the city of Medellin became aware on responsible sexuality.

Each young person participates in two meetings to learn about what is HIV and its routes of infection, in order to use effective methods to prevent transmission

1.a Sensitization workshop: It is a space for reflection and awareness about responsible sexuality

1.b Documental: CINEMA- FORUM allow the analysis and reflection on risk behaviors and routes of HIV infection

2. Discussion: It is a space to talk and resolve questions about HIV, focused on responsibility.

During this training process, young people are invited to learn more about this topic and to visit our blog on HIV / AIDS

In this web site they might find information published by a group of medical experts, who frequently summarize important topics of interest on HIV / AIDS.

The educative institutions with our interventions are IE Luis Carlos Galán Sarmiento, Colegio Campestre La Colina, IE Alfredo Cock Arango. Additionality,  this campaign is extended to community-based organizations that have as mission to streghten the training process of young people by giving information on sexual responsibility. As a consequence, a  group of 20 young people from the Corporación  Picacho con Futuro, attended the meetings to learn about HIV and the ways to protect and prevent infection.