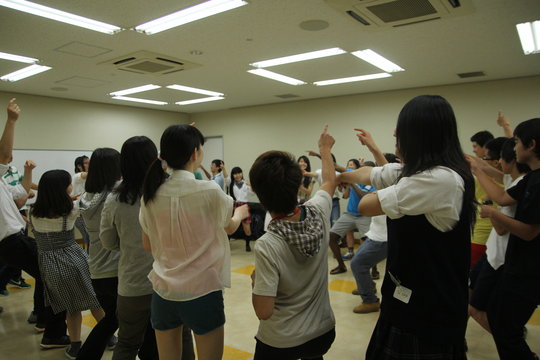 On July 13, JISP organized a leadership event with Benesse Corporations in Sendai for high school students in the Tohoku region.

Next month, together with ADRA Japan, JISP team will offer a photography workshop in Tokyo for 17 high-school students from Futaba high school in Fukushima prefecture. The students will meet with professional photographers working in Japan and abroad, learn about different techincs and power of visual materiels. The students will then conduct their own photo-shooting and present their work in the graduation ceremony of the high-school next spring.

JISP will continue enhancing its youth leadership trainning programs, and partner with other organizatino in order to rebuild the lives of Tohoku youth. Thank you for your long-term support. 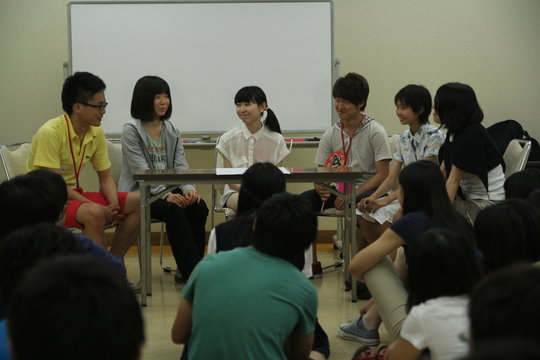 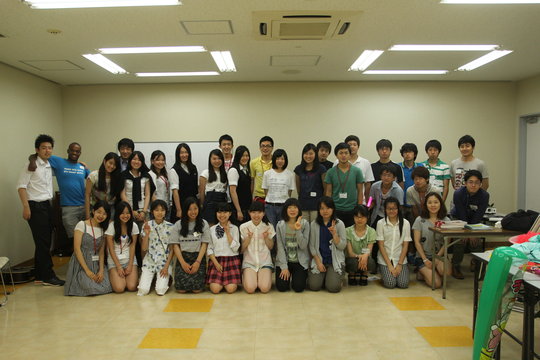 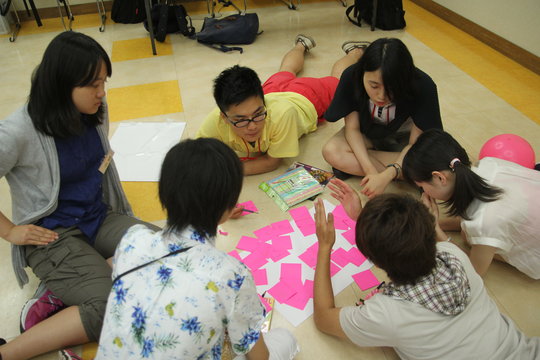 During the past three months, our work focused on three dimensions : (1) creating a network of partners committed to the project, in order to build local capacity, and (2) facilitating academic research that utilizes raw material received during previous month and (3) ensuring full transition between Project Directors.

(1) Creating a network of partners committed to the project, in order to build local capacity.
During the past three months, VOT presented its work on varioud occasions : in an academic conference in Nagasaki (May 25), at the University of Tohoku (June 9, infront of 60 researchers), in Musashino Art University (June 23, infront of 45 students) and at Meiji Gakuin University (July 30, infront of 14 researchers);

In addition, our team have presentated VOT related work in a board meeting of Ohneru project, a unique aid organization working in Tohoku area and in the mediatheque, together with "Center for Remembering 3/11".

On May 29th, Ms. Atsuko Fish from the "Fish Foundation" visited the local VOT archive in Ishinomaki, and heard from the museum manager about feedback recieved from visitors to the archive.

A research group composed of seven Japanese researchers in the mental-care field has been consolidated over raw material received from VOT interviews. The group will meet on a regular basis and further develop theoretical knowledge out of the data collected.

In the past two months, VOT has been seeing a transition between project directors : time was spend on trainning the new director with the "life-story interview" technique, introducing contacts, editing videos, and much more.
In the past week, interviews were re-started and 3 new interviews were done in Ishinomaki, Miyagi perfecture.
In the past month, our team has edited 5 videos.

We expect project outcome will significantly grow in the next three months. 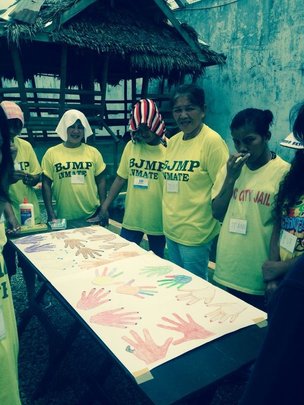 On November 8th 2013, the Philippines were devastated by what is being called the most powerful typhoon to have made landfall in modern times. With sustained winds of over 200 kph (peaking at 315 kph), typhoon Haiyan, locally called Yolanda, killed over 6,000 people, injuring more than 27,000 others, displacing approximately 4 million people, and affecting a grand total of 16 million people. 48 hours later, IsraAID's first emergency team left Israel.

IsraAID with Ormoc's City Health has conducted 8 days of MHPSS training to 3 groups. Each group had 12 participants from different key departments such as: Philippine Police, City Social and Welfare Development, Community Volunteers, Bureau of Jail Management, Consulters from Department of Education, Nurses and Mid-Wives. On March 31st we started our 4th batch of training, for 30 teachers from Department of Education.

On March 20, 2014, two core team members (Elia and EmEm) carried out an expressive arts psychosocial support intervention at Elia’s school – Linao National High School - with a group of 10 tenth graders, 8 girls and 2 boys. The participants had experienced some school-related stressful event. Using tools that they learned in the TOT, Elia and EmEm did a warm-up using movement, sound, and games. They then did an experiential called Body Map, in which the participants first explored their vulnerabilities and then their strengths. After the art work they had a sharing session in which the students talked about the stressful event in relation to what they had discovered in their ‘Body Maps’. Elia and EmEm clearly have internalized the approaches and techniques they learned in the Core Team training in January and adapted them to their population.

During March 24-31, core team member (Lynn) with the mentoring of the therapists Ruthy Lipman carried out an expressive arts psychosocial support interventions in the shelter for boys in Ormoc city, with a group of 6 boys (16-17 years old) and 5 staff members. Using tools that she learned in the TOT, Lynn did a warm-up using movement, sound, and games. She conducted many experiential activities that through expressive arts. After the art work she had a sharing session in which the boys talked about the power of a group, their "safe place", the use of metaphors to express feelings and the power of the individual in a group. All this sharing was reflected from the previous art session.

The boys and the staff came to our MHPSS training ceremony and received certification of attendance in the workshops.

During March 24-31, core team member (Lynn) with the mentoring of the therapists Mis. Ruthy Lipman carried out an expressive arts psychosocial support intervention to 11 female prisoners that are waiting to trail. Using tools that she learned in the TOT, Lynn did a warm-up using movement, sound, and games. She conducted many experiential activities that through expressive arts. After the art work she had a sharing session in which the boys talked about the power of a group, their "safe place", the use of metaphors to express feelings and the power of the individual in a group. All this sharing was reflected from the previous art session.

It was very powerful experience to the participants, because they never got any Psycho-Social support, and they experience many stressful time, while waiting more than 5 years to trail. (Notice that the pictures are just of internal use, due to its sensitivity regarding to the prisoners)

On the month of March 500 families were relocated to two temporarily sites (known as bunkhouses) in Barangays Conception and Can-untog, due to ongoing conflict about illegal constriction.  After the trauma of Yolanda, those families are dealing today with more challenges and difficulties in their lives. From IsraAID's need assessment it reflected that the residences and the workers in the bunk houses are experiencing trauma, stress and habituation problems. Adding to that, they experience today many hard conditions of living: A family of 5 people lives in a house of 8 square meter, 12 families shares two toilets, 2 bathrooms and 6 field ovens. Some of the people lost their jobs due to the relocation and some children find it difficult to attend school. Their leisure is also affected because there are hardly places with shade; so many people have to stay at home seeking for a shelter from the sun.

Hence IsraAID conducted there Psycho-Social relief activities with the tool of expressive arts, that was focused on the most needed population – the children and the mothers. The goals of the workshops were to Support, to empower and to create a group and community atmosphere.

The workshops conducted for four days, and reach 65 people. The sessions concentrated on introduction to each other (most of the residents do not know their neighbors), sharing of feelings, self discovery and using metaphors through house building from boxes.

These activities led to partnership between IsraAID and LDS, due to the fact LDS contributed the carton boxes. After that, we shared with them the photos of the activities, which led them to decide to donate shoes, clothing and food to the residents of the bunk houses. Each family received 4 items: one pair of shoes, one food product and one cloth. After this success LDS decided to return there and to distribute also shoes for the children.

Livelihood – Fishery and Agriculture
A large majority of the Ormoc population (203,540) relies on agriculture and fishery for their survival and source of income. The fishery industry suffered nearly 100% loss, poultry 97%, and agriculture was also nearly completely devastated. For those whose livelihood was based on these sectors, in addition to having no food, roof, or even home, they were left with no source of income for the foreseeable future.

IsraAID with the support of Philos Health is supporting 10 fishermen, and will distribute them ten motorized boats. On March we conducted interviews with fishermen from the village, and selected ten. Furthermore, IsraAID is creating within the beneficiaries a community saving bank account, each one of the beneficiaries will deposit each month 100 Peso, to the community. Each month the community will have a meeting to decide how to use the money in a way that will benefit all the community of the village. In these meetings, we will also conduct training to the residents of the village, on topics they had shown interest in such as: Finance, Family planning, Creation and management of cooperative, Education, Agricultural and more. The training will be based on volunteers from local Church.

Prior to the Typhoon, Ormoc was home to 50,488 students enrolled in 97 public schools and taught by 1,544 teachers. Yolanda damaged 95% of school buildings, destroying 92 (7%) classrooms and rendering 55% (692) of them roofless and unusable. Among these, Ipil Central School and Ipil National High School were severely damaged by the Typhoon and are in dire need of repair and reconstruction. IsraAID contracted a local engineer to assess the renovation costs in both schools. IsraAID on the Month of March almost finished the renovation of the science class (only painting is lacking). We also started in the Renovation of one building with 6 class rooms and another class. 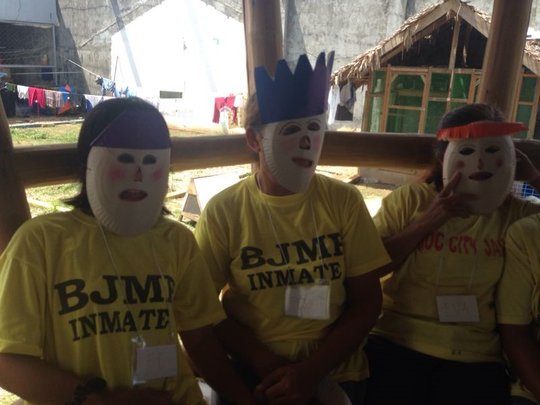 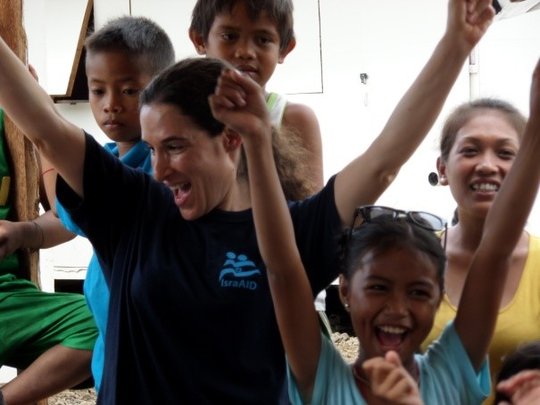 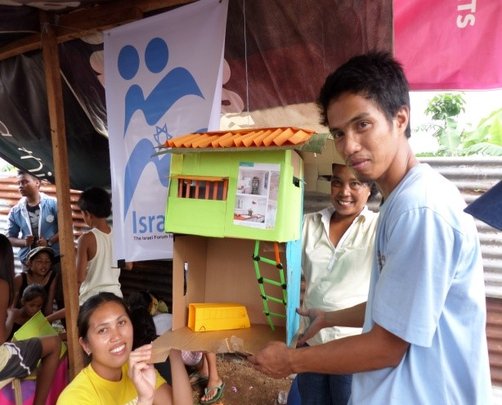 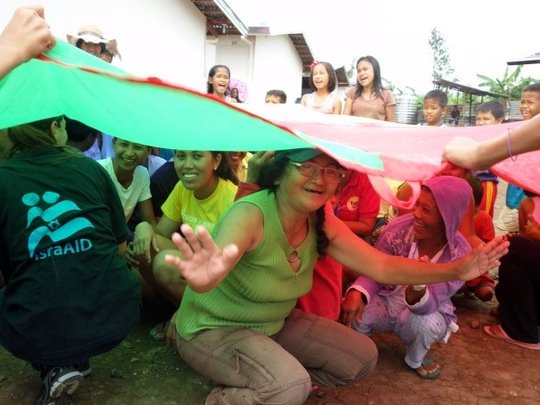 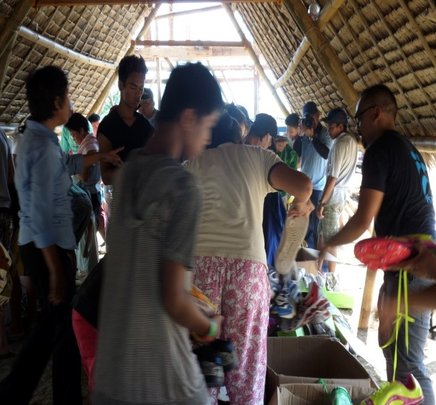 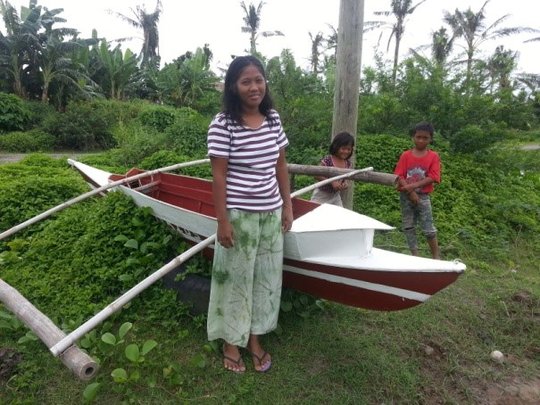 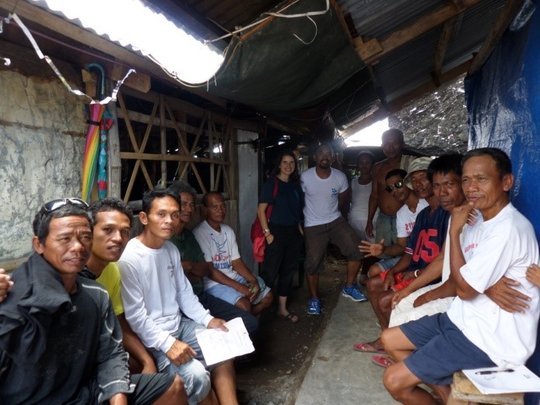 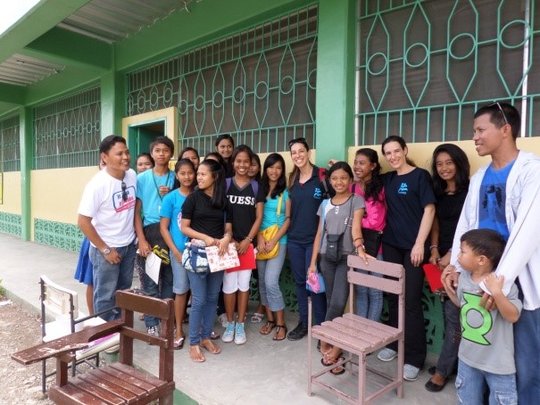 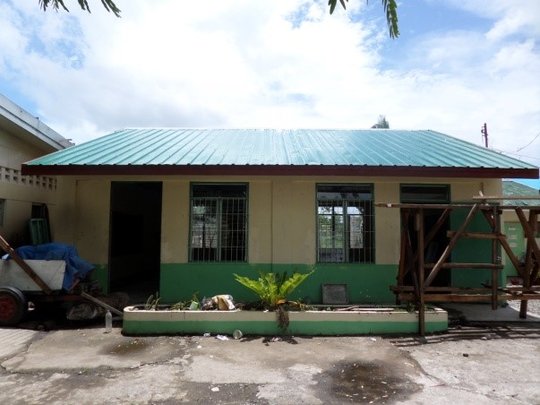 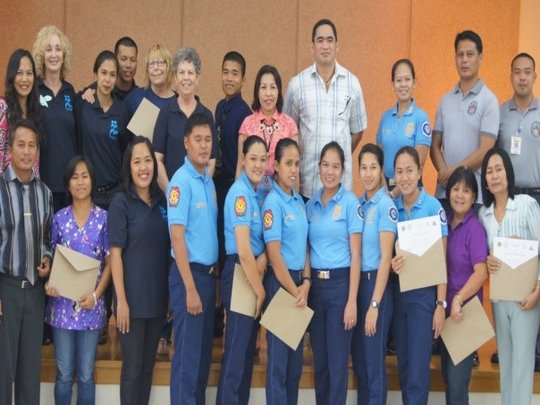 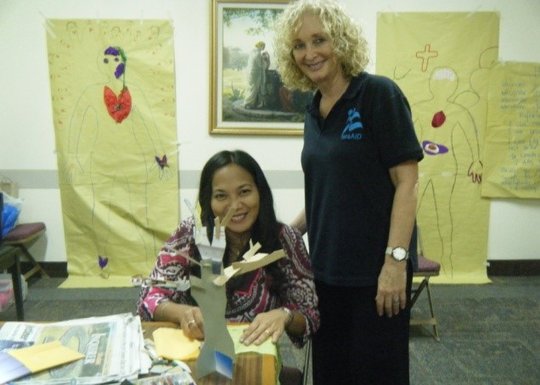 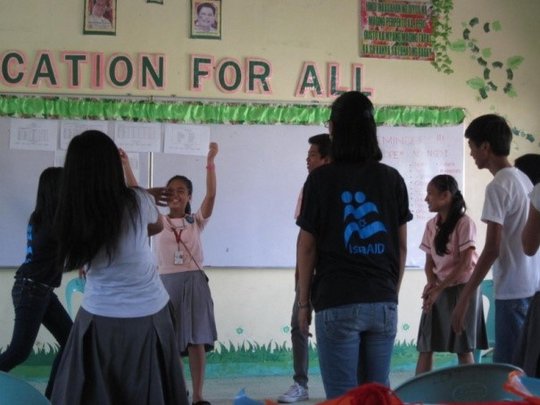 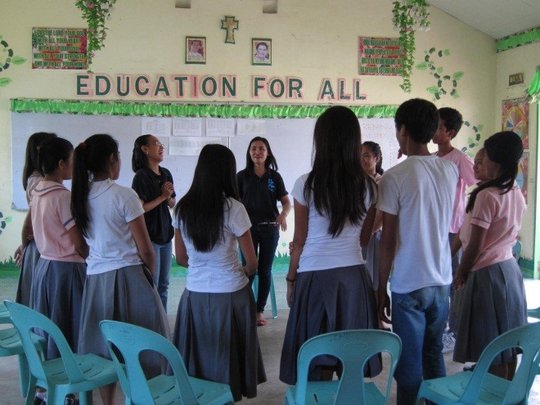 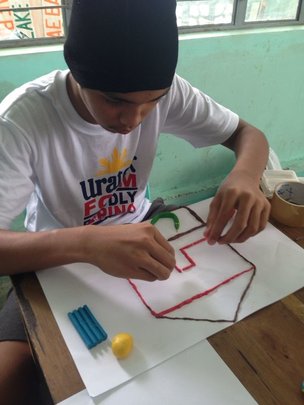 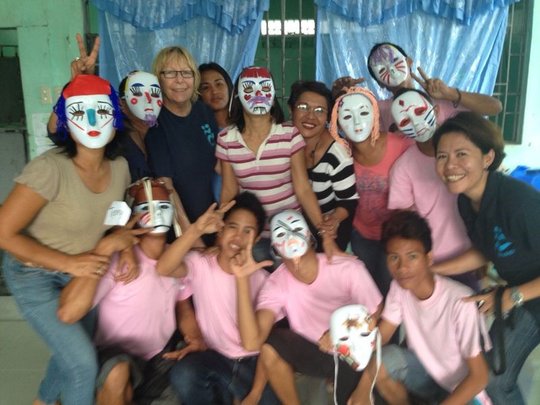 Core Group Intervention: (Boys Shelter 2)
‹ 1 ... 104 105 106 107 108 109 110 111 ... 113 ›
WARNING: Javascript is currently disabled or is not available in your browser. GlobalGiving makes extensive use of Javascript and will not function properly with Javascript disabled. Please enable Javascript and refresh this page.