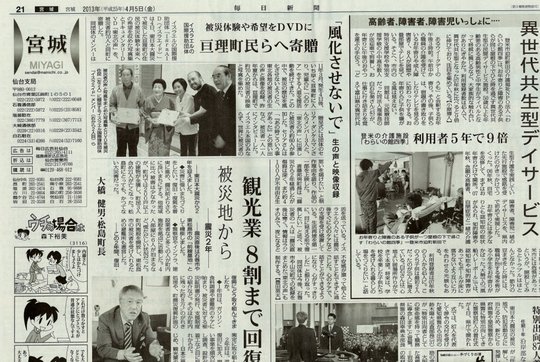 Opening of the first community archive in Watari

After the interviewers were trained, an IsraAID project coordinator scheduled interviews. Local community leaders started conducting interviews first with top ranking officials in the local municipality and then with other local groups and individuals. By doing so, IsraAID was able to document a wide perspective of the community story.

While interviews were only administered to those who wished to share their story, we were able to gather valuable stories from interesting people such as teachers who ran the evacuation shelters, firemen who had saved lives, residents of the temporary houses, and people who had lived in the most affected areas.

Each interviewee was required to sign a release form, in which he /she could choose whether they would like to "share their story with the world", or keep it within the local community.  Surprisingly, about 95% of the participants agreed to share their testimony with the public.

As of late May 2013, IsraAID has gathered over 110, 60-90 min testimonies from the towns of Watari and Yamamoto in Miyagi prefecture, and the collection is one of the largest video documentations related to the 2011 Tohoku disaster.

This large number of stories was collected mostly because of IsraAId's strong trust with the local communities. We have received full support from local municipality and our work has gained a positive momentum in the community.  Through word of mouth, we were able to find more and more people willing to share their stories.

Personal: Each person interviewed received a specially packaged DVD containing the full contents of their interview and a community book provided by Hewlett Packard (HP). The DVD booklet can be passed down generations, and especially for the elderly, a hard copy of their story serves to preserve their memories.

Community: IsraAID  launched the first community archives in Watari and Yamamoto on April 2013.

During the opening ceremony, about 120 participants including the mayor, communitiy leaders and temporary housing residents who were interviewed participated (see attached article).

So that the local community and schools can use this package for memorial and educational purposes, we have worked to make it as openly public as possible. In Watari, the archive has been given a special section in the central town library, where anyone can come and watch the stories.

The first was an academic event hosted by Prof.Amia Lieblich with professors from Japanese Universities  (University of Tokyo, Meiji Gakuin University, Kyoto University, etc.). In this event we discussed the possibilities of research based on the testimonies from Tohoku and presented samples of interviews.

The second was an awareness event under the title "Voices of Tohoku" in which we presented the project, as a whole including few testimonies and the community books. The event received large media coverage and the guests included 30 leaders from Tohoku including the mayor of Watari, Former Japanese Ambassador to the U.S. Fujisaki Ichiro, and representatives of NPOs working in Tohoku.

Some of the interviews are also in the process of being translated into English, so the stories can be viewed and understood by people worldwide.

Further, so these stories can benefit the future of Japan, we are currently in the process of digitally archiving these videos in various digital archives, including the “Hinagiku”, the Great East Japan Earthquake archive owned by the National Diet Library of Japan. In the archiving process, interviews will be transcribed, translated, subtitled, based on each archives’ needs. In the future, researchers will be able to access these archives to use the videos for qualitative research into the disaster. These archives will provide a sustainable framework that will allow this project to expand in the future as the diversity of the voices grows.

Since the launching of the “Voices of Tohoku” project in early September 2012, the scale of the project has grown dramatically and awareness of the project has further increased interest in the Tohoku region and in the academic communities around Japan. This increase in interest has allowed IsraAID to partner with academic institutions such as Meiji Gakuin University and local NPOs. Additionally, we have been able to create trust in other communities, providing IsraAID with the opportunity to expand the program into additional towns in Tohoku and within the towns we currently operate in. IsraAID believes that this project has a potential for further growth both on the local and national aspects. 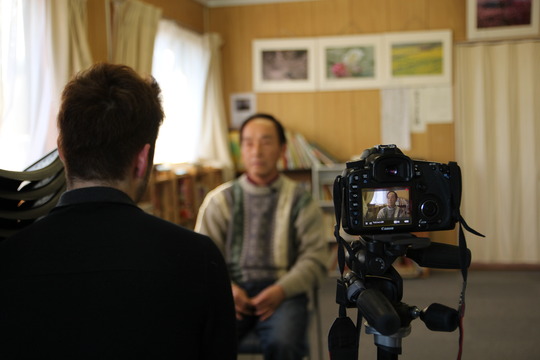 behind the scenes of an interview

Background of the Project

For the survivors of this tragedy, life will never be the same. Seeing homes and livelihood completely destroyed, and losing friends and loved ones in front of their very eyes, the survivors of the Tsunami experienced a horrific event that that shook the foundations of their existence. Even from the beginning of IsraAID's mission to Japan, we found that the survivors felt a strong need to share stories of their experiences and events. Reliving the effect of the tragedy is challenging, and it seems the weight of the experience and trauma was so heavy for the survivors that they felt a need to tell someone about it, or to 'let it out'. IsraAID believes that creating a space and platform for people to share their personal experiences is a fundamental part of the healing process of these survivors. In addition to its therapeutic importance, documentation of these stories preserves the collective memory of the community that was changed in the disaster.

In early September, IsraAID conducted a seminar for Japanese professors from various Universities and institutions (Tokyo University, Meiji Gakuin University, Akita, Dipex, World Health Organization). In this seminar, the main focus was on interviewing theory—how to approach interviewees and speak to them in effective ways. This seminar was conducted by Professor Amia Lieblich, an oral history expert who has conducted interviews for personal archive projects with Holocaust survivors, Tibetan refugees in India and others. After the seminar, the program moved to Tohoku, where 20 community leaders from Yamamoto-Cho, Watari-Cho and Sendai went through 5-day extensive interview training. During these five days, the group of interviewers learned video interviewing techniques and conducted mock interviews to prepare them for real interviews. During this time, photographer Alex Levac arrived for two weeks and with the help of local municipality and community leaders, gathered photos of places and activities that represent the spirit of the towns of Watari and Yamamoto.

After the interviewers were trained, an IsraAID project coordinator made a schedule for interviews. Local community leaders started conducting interviews first with top ranking officials in local municipality and then with other local groups and documented a wide perspective of the community story. While interviews were only administered to those who wished to share their story, we were able to gather valuable stories from interesting people such as teachers who ran the evacuation shelters, firemen who had saved lives, and people who had lived in the most affected areas.  Each interviewee was required to sign a release form that gives them the option to either allow IsraAID to use all of the materials freely or to limit the use of their personal testimony. Roughly 95% of participants agreed for their testimony to be open to the public. As of February 2013, IsraAID has gathered over 75, 60-90 min testimonies from the towns of Watari and Yamamoto, which currently is considered among the largest video documentation made to date in Tohoku. This large number of interviews was made do to IsraAId strong trust with the local communities,  We received full support from local municipality and our work has gained a positive momentum in the community.

On March 8th  2013 we will hold an academic event for professors from various Japanese Universities on Oral History Research based on the stories from Tohoku.

Also we will launch our community books and honor our local partners at a ceremony.

Following we will begin delivering the participants from Tohoku a package that will include each personal interview on DVD along side with the community book.

In addition we will launch local archives in the Towns of Watari and Yamamoto so that residents will have access to the videos produced by Voices of Tohoku project.

The local municipality will copy our digital files so that data will remain stored for the future.

Local Municipality will also hold a screening event for the local residents.

Since the start of the “Voices of Tohoku” project in early September 2012, the scale of the project has grown dramatically and awareness of the project has further increased interest in the Tohoku region and in the academic communities around Japan, and it allowed IsraAID to partner with academic institutions such as Meiji Gakuin and University of Tokyo and others so to expand the program into additional towns and within the towns we currently work. 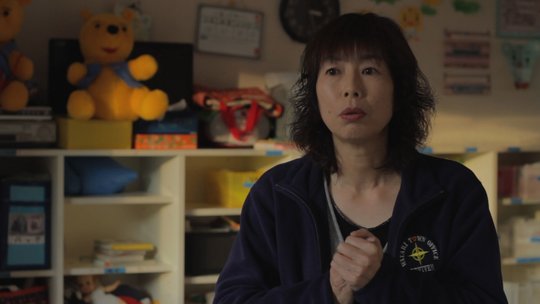 interview with teacher in Watari-Cho 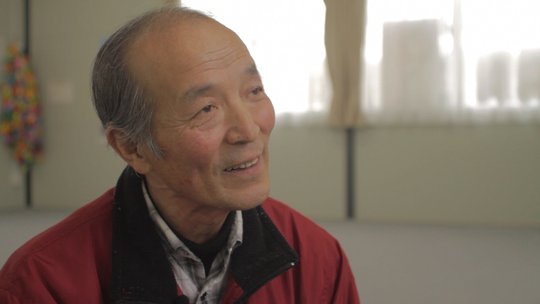 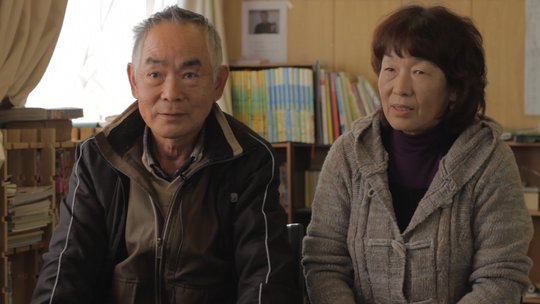 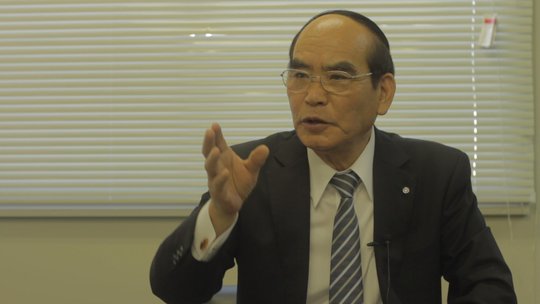 interview with mayor of Watari-Cho 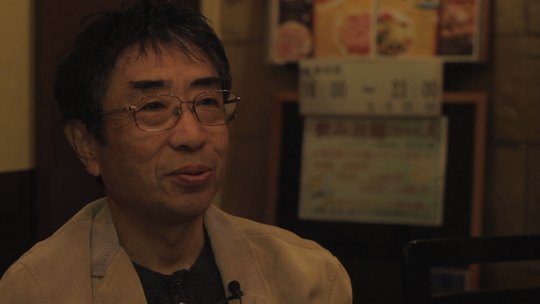 interview with resident of Yamamoto-Cho
‹ 1 ... 98 99 100 101 102 103 104 105 106 ›
WARNING: Javascript is currently disabled or is not available in your browser. GlobalGiving makes extensive use of Javascript and will not function properly with Javascript disabled. Please enable Javascript and refresh this page.