Bringing Care Closer to the Children 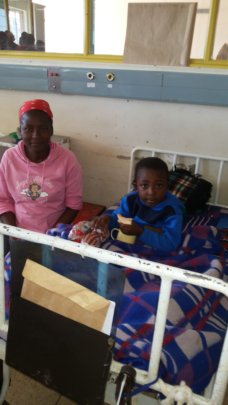 Reaching out with services

Taking cognisance that the centralisation of cancer services is greatly affecting children fighting cancer, Kidzcan is working frantically to decentralise its services and mostly to give information away. This is with the realisation that early detection of childhood cancer saves lives, and reduces the morbility and mortality rate. Almost 440 km away from Parirenyatwa Group of Hospitals' children cancer ward, Mpilo Central Paediatric hospital is treating children with cancer with the assistance that Kidzcan is giving. However, the cancer care that children get is not comprehensive enough, as part of the treatment and care is between 400-800 km away. The children commute between the two cities as and when they need the part that is not available.

Nothing much has changed, children are still being transferred to the specialist hospital and not all of them are able to go. For those who come, not all of them get around services efficiently. Kidzcan with one vehicle cannot do all. The need for bringing care to the children is getting bigger. As the organisation continues with the outreach programme for community education on childhood cancer, more children are seeking services. Unfortunately more children come at late stages of cancer and get discharged on palliative care. The health delivery system still registers the highlighted challenges:

With all the highlighted challenges, the need to assist the children with cancer get to services and care cannot be over emphasised. The ambulance is a requirement, so that the delay between point of need and point of care is reduced. Cummulatively Kidzcan has registred 2416, 489 have deceased, 5 are on remission and only 800 are active in the data base. The above statistics indiated a high number of children lost to follow up. The is due inaffordability of transportation between services. Kidzcan has been assisting children with the following types of cancer:

Only 29% of children requirng cancer services are from local and 71% require transport assistance. 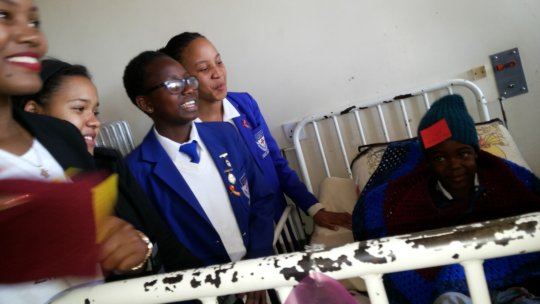 support in the fight, a strong hero! 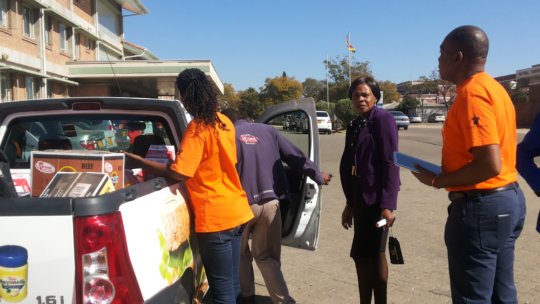 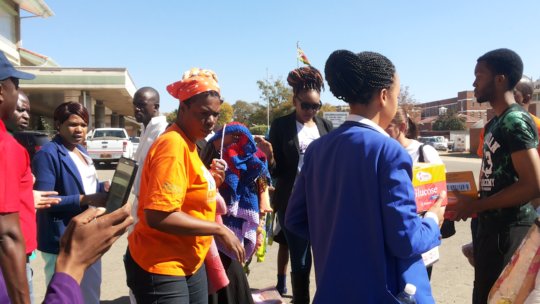 We came earlier than Santa! 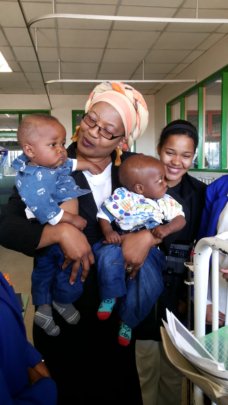 The economic challenges facing the country are affecting the health delivery system. The public health system is having challenges in coping with its priorities. However, cancer management is not one of the top priorities and childhood cancer is one of the least. Children with cancer have limited support in the fight. Kidzcan in many years has been battling to give assistance single handedly in the face of ever increasing demand.

The local sponsors have reduced as the country’s economic status is getting skewed by the day. Kidzcan is delighted that our plea was heard from a distance and corporates from Bulawayo came to our rescue. Fashion Design Expo held two fundraising events which were preceded by a kind donation to 6 children with cancer as well as 120 other children at Mpilo Children hospital. Part of the donation was given to more than 40 children in Parirenyatwa Group of Hospital’ Children Cancer Ward.

During the Fashion Design Expo fundraising Events, three girls from Girls College Zimbabwe (together with Michelle Mayiseni, a cancer conqueror), showed a lot of concern as they also walked door to door in the neighbouring suburbs asking for donations, selling T-shirts and Bandanas in a plight to raise money for children with cancer. There were various teams of tiny tots, toddlers and bigger children and even dads during the sport event competing with the knowledge that this was not just a game, but a lifesaving game for a child who does not have the opportunity to play and see the light of the day.

In a heartwarming gesture, another group of university students held a glow run which was attended by many students from various schools across the country. The Glow Run was an amazing even and the organisers (Roman Catholic Rhodevile Youth) worked tremendously to put the event together. This was a fundraising event for children with cancer in Zimbabwe. The attitude of young people is Zimbabwe is plausible and their concern towards children with cancer is amazing. They understand what childhood is and all the pain that comes along with not getting the childhood any child deserves because of confinement to hospital and the pain the children with cancer endure.

Many children with cancer deceased during this season and even those that seemed strong and doing better with medication. A gloomy play room in the hospital without Dr Rumbie. There is no explanation of what could have been done differently to save her life. Due to the complications of Acute Lymphoblastic Leukemia (ALL), she had a peaceful rest on the 20th of July. She and the other 2 girls deceased in an interval of a day apart. Watching them getting into the hospital never to come out, was traumatic especially with the bond that Kidzcan has with these young cancer fighters. The 3 girls were part of the 33 heroes and heroines that lost the fight since the beginning of the year. We believe there are many factors that contributed to this, some of which are, the quality of treatment children with cancer in  Low Income Countries get, the lack of funding for research in order to understand our genetic, which seem quite different than what history says it is, human resources (there are no paediatric oncologists in the country) hence paediatricians that have some experience with oncology have been trying as much as they can, poverty and centralization of cancer services which are more than 400km for some comminutes, among others.

During this month of September Kidzcan will carry the Golden Light and shine it very high as we stand in solidarity with children fighting cancer. We invite all in sundries to stand with us too.

Kidzcan believes, Children have the right to good quality health care, to clean water, nutritious food, and a clean environment, so that they will stay healthy; and that Rich countries should help poorer countries achieve this.

Our Desire is to ensure access to affordable cancer management services for Children with cancer reflected in increased allocation of resources towards cancer services provision in the national budget. 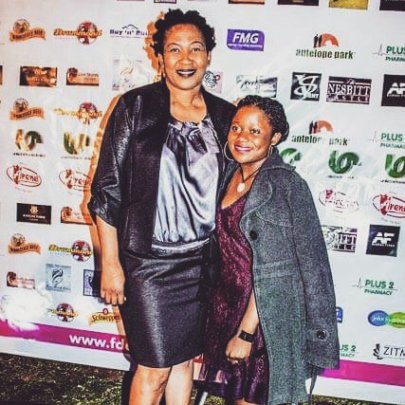 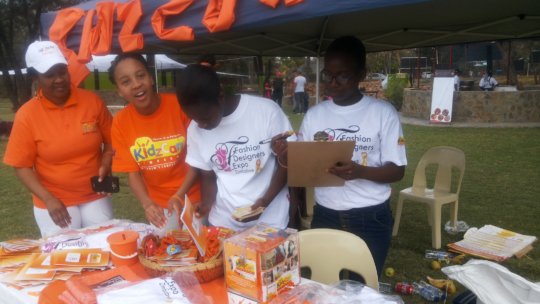 We will sell anything to pay for cancer treatment! 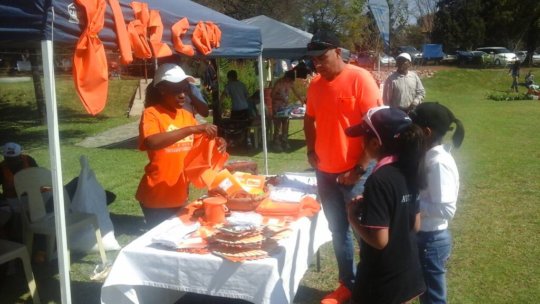 We raise awareness and raise funds! 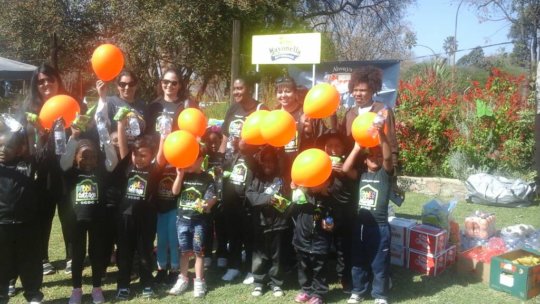 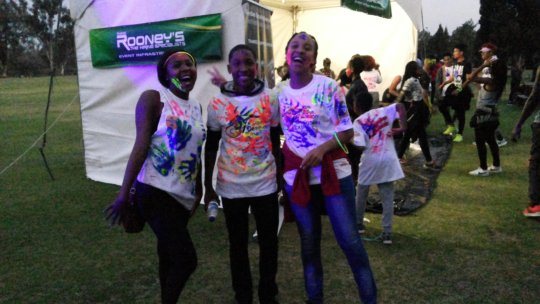 A Glow Night for the Support! 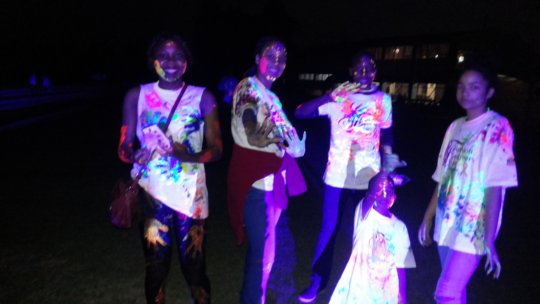 For Children by Youth! 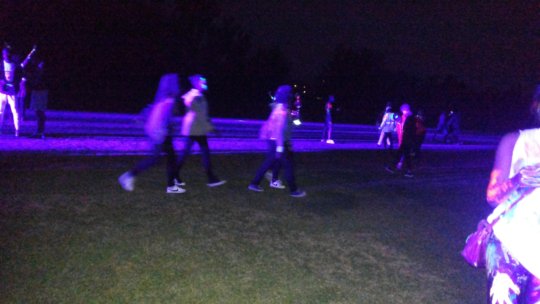 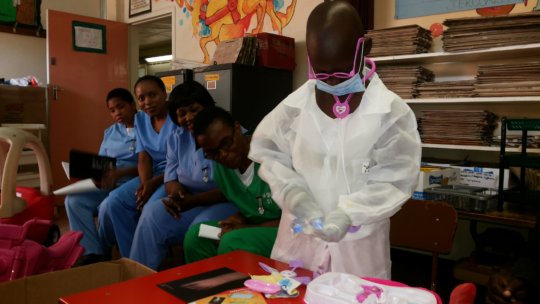 Children understand it better when they are in control of whatever situation they find themselves in. Fighting cancer needs courage and courage comes when children are privy of what is going on around them. To facilitate understanding of hospitalisation, after receiving medical toys, Kidzcan trained nurses on how to orient hospitalized children on their treatment care plan, procedures and process. The main aim was to ensure children with cancer understand the hospital routine in order to motivate their participation in their care. This was premised on the fact that hospitalization, medical examination and healthcare procedures and processes can be difficult for children of all ages. More so, unfamiliar faces, places, fear of the unknown and separation from family members can all increase children’s anxiety level and challenge their ability to cope with hospitalisation. Coupled with differences in cultural background and socio-economic statuses nurses have many other challenges preventing them from dealing effectively with and even getting cooperation from hospital ill children.

A total number of 30 nurses working in paediatric wards in 3 hospitals were trained in Make-Do-Doctors play. The training included allowing children to role play the doctors and nurses roles and what they understand them to be. It is important to note that children understand far much more than anticipated. Given enough time and in an enabling environment, children cooperate, understand and even participate in their care. They become more jovial and emotionally and socially functional and have increased tolerance to hospitalization and confinement. More so, there is increased understanding, tolerance and cooperation from parents/care givers of children with cancer. Parents/ caregivers are also preview to the information and aid (accessible services) offered by Kidzcan and the Ministry of Health and Child Care.

Kidzcan has been doing a lot in helping children with cancer. Currently, the only NGO focusing on childhood cancer, the following figures show how much need there is, in terms of cancer management and care, progressively over 10 years. It is pleasing to note 17 children are on remission, however, this figure falls far short of what the country ought to achieve. With prioritization and integration of childhood cancer to child health strategies, donor commitment, prioritized health financing, more epidemiology date in Zimbabwe, there will be more positive outcomes and increase in the figure of children on remission. The following statistics show the number of hildren registerd with Kidzcan as well as those that lost the battle to cancer in past years.

Through the kind donations from many friends that have been collated by Globalgiving, Kidzcan is able to save the lives of children with cancer in Zimbabwe 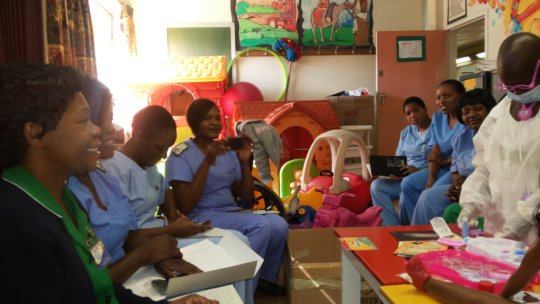 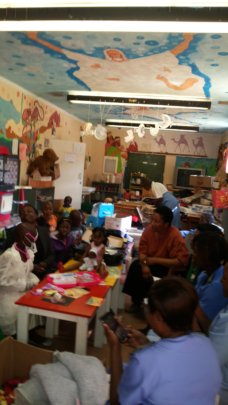 Children in charge of their own care and treatment 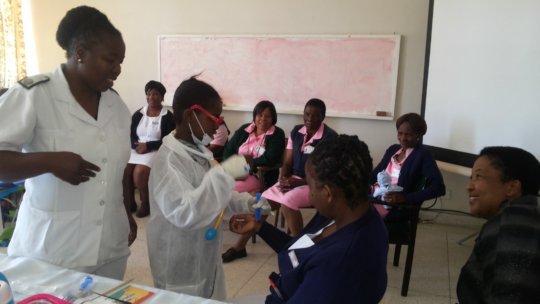 Withdrawing a blood sample
‹ 1 ... 5 6 7 8 9 10 11 12 ... 16 ›
WARNING: Javascript is currently disabled or is not available in your browser. GlobalGiving makes extensive use of Javascript and will not function properly with Javascript disabled. Please enable Javascript and refresh this page.