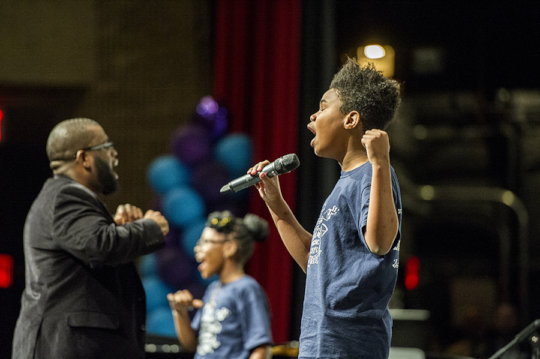 Summer vacation is almost upon us, and the students in ETM partner schools have come such a long way since the fall! Over the last three months, ETM partner school students have wowed audiences at spring concerts and the annual ETM Festival. This year, in addition to having a band day and an orchestra day, the festival also featured a day for choir. Over the course of the three days, 2000 students were able to showcase how far they’ve grown throughout the year. They were able to express themselves and be a part of a larger community with their peers from other schools.

One student in particular has come particularly far since the fall. Noah, a third grader at an ETM partner school in the Bronx, is a model student, but that wasn’t always the case. Back in September, Noah was well-known at his school for being a trouble-maker. So much so, that his music teacher was warned of his disruptive behavior and lack of focus. However, she was certain that music class could be just what Noah needed, and it turns out that she was right! She instantly noticed Noah’s aptitude for music. Noah constantly expressed his desire to learn new instruments, particularly the Djembe drum. His teacher told Noah that if he behaved himself during class, he could play the djembe at the end. Since starting music class, Noah gets to play the drum at the end of almost every class. He has shown a strong natural talent for drumming, and this gave him a major self-esteem boost. With his newfound confidence, he no longer acts out.

Noah’s drumming excellence is just one part of his transformation. His music teacher noticed that his behavior has greatly improved, and he is less of a problem in his other classes because of his stellar motivation. Music has given Noah an opportunity to express himself that is appropriate, and has helped him become that model student who understands the importance of listening and focusing.

Noah’s music teacher shared that when his class received recorders for the first time this year, he took initiative and reminded his peers how important it is to take care of the instrument, as it is just like using your voice. Music has helped Noah grow exponentially as a student and a person, and his teacher is confident that music will continue to be a part of his life.

By supporting ETM, you are helping students like Noah soar with confidence, leading to better motivation and focus. Thank you for supporting ETM and helping us serve the students that need it most. Show your support for ETM by sharing this report with a friend; let them know how great your impact is! 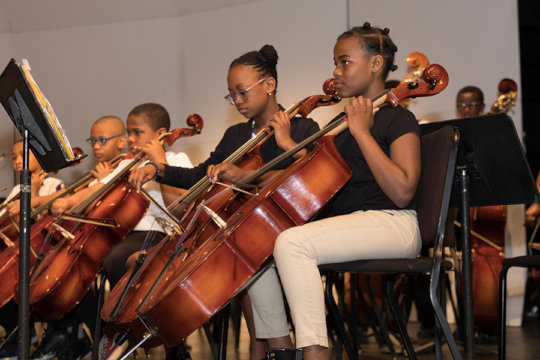 Spreading Positivity In and Out of the Classroom! 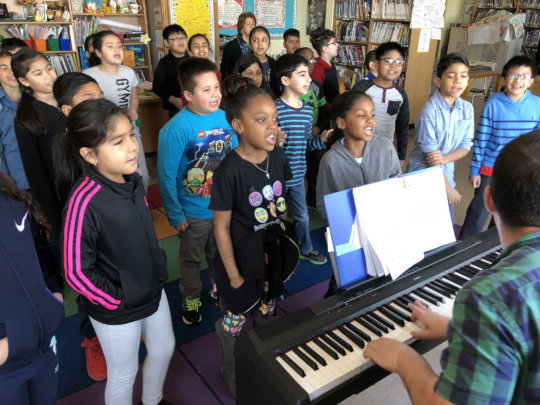 Happy spring from ETM! With little time remaining before spring concert season begins, ETM partner school students are working extra hard so that they can showcase everything they’ve learned this year. The growth these students have experienced is remarkable, especially for the 6,500 children in our newest partner schools. For these students, general music was not part of their regular school curriculum until September. Today, they continue improving and working together to become strong and well-rounded students.

For Xavier, a fourth grader at P.S./M.S. 279 in the Bronx, the introduction of music to his routine has made his overall school experience more fruitful and enriching. Xavier has had issues paying attention and staying on task. He loses focus very easily, which poorly affects his grades and general classroom performance. This has led to him getting very upset and having frequent emotional outbursts. However, Xavier’s music teacher noticed that Xavier was considerably calmer in her classroom. He participated in her class by asking and answering questions, and actively engaged with the subject matter.

Recognizing that he had musical gifts, Xavier’s music teacher encouraged him to join the choir, but he was hesitant since it meant staying after school for rehearsal. Initially, he would show up for rehearsal, but sulk the entire time. Within a few weeks, however, Xavier’s attitude started to change, and he now loves being in the choir. His teacher reports that he is one of the most dedicated choir members and is eager to get to rehearsal each week. Xavier’s positive experience in choir has transformed his total academic performance, and his other classroom teachers have commented on how much he loves music, and how he is doing much better at staying on task in their classes.

Music has provided a safe place where Xavier can positively express himself, and it’s renewed his excitement for school overall. Xavier will get to sing his heart out at the upcoming concert in May. A once reluctant choir member is now a dedicated and active participant. Your support of Education Through Music is helping Xavier and other students like him engage and focus in school. Thank you for your continued generosity and for helping the students in ETM partner schools get the opportunity to unlock their full potential. Show your support for ETM by sharing this report with friends or family, and let them know how far their support can go! 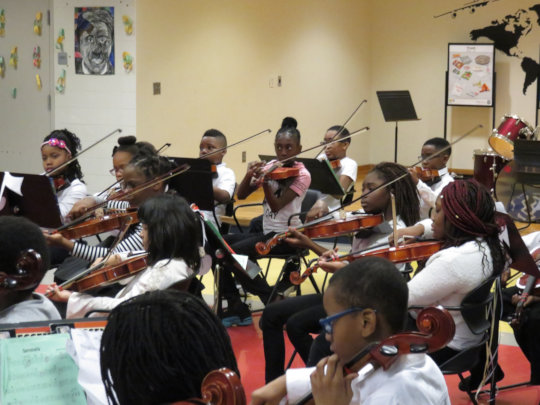 Growing and Shining Brightly Together! 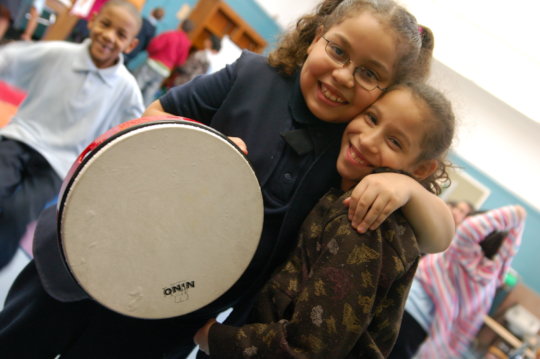 It’s hard to believe that spring is around the corner, especially with the recent storms keeping us all on our toes! Our partner school students continue working hard in the classroom and are improving each and every day. In January and February, partner school students performed in band and orchestra concerts for their parents and school community, and soon enough they will get to show off their ever-developing skills at the spring concerts!

One student whose star will be shining extra bright at the spring concerts is Daniela, a bright fifth grade student at an ETM partner school in the Bronx. Daniela’s transition to fifth grade hasn’t been easy, as this is her very first year in a public school. Previously, Daniela was home-schooled. Despite being motivated, Daniela started the school year without knowing any of her fellow classmates. She wasn’t used to being in a classroom all day with other students, and became very shy. She lacked the confidence to start up a conversation with her peers, which led to her not having many friends. This all started to change when Daniela started taking general music class. She really enjoyed going to music, and formed a great relationship with her music teacher.

At the encouragement of her teacher, Daniela decided to join the school band. Joining the band really helped Daniela come out of her shell, and she quickly became more social. Before joining the band, Daniela was too shy not only to make friends, but also to actively participate in class. She didn’t have the confidence to raise her hand and answer questions, even when she knew the answer. Once she was part of band, that shyness melted away. She is no longer afraid to raise her hand in class and answer questions, and she has more confidence to engage in class and with others. She has formed close relationships with her bandmates, and they encourage her to keep participating in class, even cheering her on when she answers questions correctly. Daniela recently auditioned for the middle school band so that, after she completes 5th grade, she can continue to grow as a student and with an ensemble.

By supporting Education Through Music you are helping student like Daniela flourish in their school environments, which will ultimately lead to their overall success. Thank you for your support and for helping us serve the students that need it most. Show your support for ETM by sharing this report with a family member or friend; let them know the impact their support has! 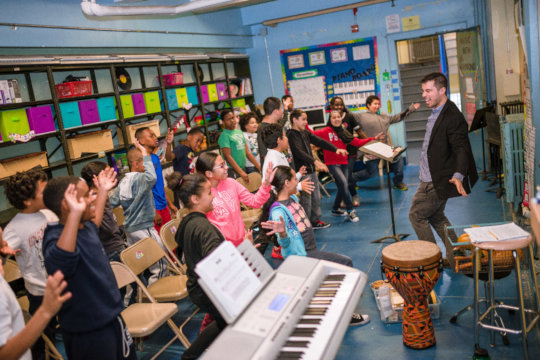 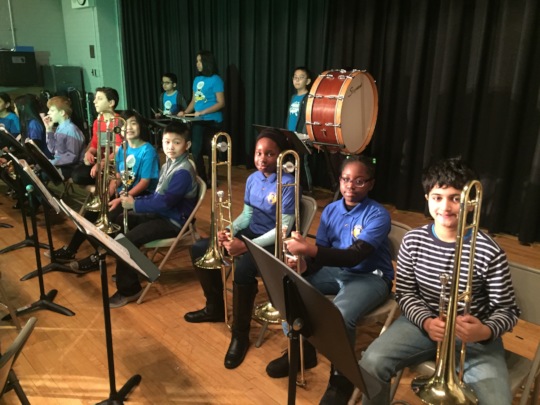 ‹ 1 ... 6 7 8 9 10 11 12 13 ... 25 ›
WARNING: Javascript is currently disabled or is not available in your browser. GlobalGiving makes extensive use of Javascript and will not function properly with Javascript disabled. Please enable Javascript and refresh this page.