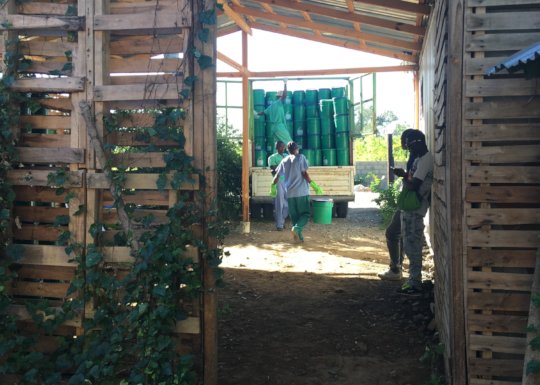 Since 2013, SOIL’s Cap-Haïtien team has operated out of an office we built from the ground up on a beautiful piece of land just down the road from our composting waste treatment facilities. Over the past six years, this space has served as a wonderful home for SOIL’s work as we have implemented and refined our ecological sanitation service EkoLakay

Now, as we embark on a journey to expand the reach of EkoLakay, SOIL came to realize that it was time to say goodbye to our office in Limonade. Why? We determined that moving offices would allow us to improve efficiency, reduce operating costs, and help ensure we have the best infrastructure and systems in place for when our office is overseeing the provision of sanitation services for a rapidly growing number of families.

Bit by bit, different parts of our teams in Cap-Haïtien have transitioned out of our old office and into new locations. First, our composting team expanded infrastructure at our waste treatment facility in Mouchinette so that those responsible for managing the safe transformation of waste to compost could be fully based out of an office on the site. Last summer, we also broke ground on a new depot in a quiet neighborhood of Cap-Haïtien, Ti Lary, which became the home of EkoLakay’s field teams and management. That left SOIL’s Regional Director, Romel Toussaint, and our Finance and Administration department still working out of our old office in the interim.

After thoughtful consideration and a short search of the properties available in Cap-Haïtien, we quickly realized that the best solution for SOIL’s needs was actually right in front of us at Ti Lary! Since then, we have been hard at work building a space on the land in Ti Lary that could become a hub for all of SOIL’s needs outside of the composting site. Though the construction process was put on hold for part of February due to ongoing protests, we were able to finish building the new offices at the end of March. Now, SOIL’s Finance and Administration department officially moved in.

Since we are now able to consolidate EkoLakay with Finance and Administration, SOIL can save time and resources by reducing the need to move between two offices and the Administrative team can better provide swift support to EkoLakay. EkoLakay and SOIL’s administration are also able to share utility expenses, which is just one of the ways that this transition is setting SOIL up to save money in the long run. Finally, we are thrilled to have SOIL’s Regional Director back in closer proximity to the EkoLakay teams as they continue the operational transformation program our teams undertook last October.

Though we are early into our new office consolidation, we are already discovering new ways that this move will streamline administration and field work. In the weeks to come, we will work on revising finance systems and administrative roles to optimize efficiency across our teams and finalize a few more pieces of the construction project. Next up? Finishing the toilet building station and installing solar panels so that SOIL can be powered by nature as we work to restore it.

Check back in the coming months for more exciting updates from our teams as we continue to prepare our systems for a successful EkoLakay expansion. Until then, join SOIL’s teams in a little celebration as we settle into our new Cap-Haïtien home!

Tracking the Reach of SOIL's Compost 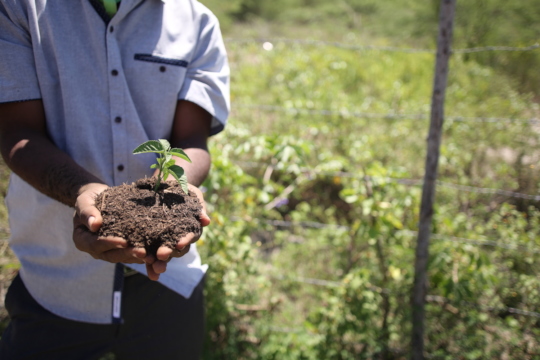 Every bag of compost we sell is a step towards a greener, more resilient future for Haiti. To help us improve SOIL’s compost marketing and sales and to grow the reach of our lush, organic soil amendments in a country with dangerously degraded soils, we track the reach of our compost meticulously.

As we crunch the numbers and work to incorporate the learnings into our strategy moving forward, we have four interesting findings to share about compost sales trends this spring:

+ Though we have a large, loyal customer base of clients that buy a bag of compost here and there to help their gardens grow, more than half of SOIL’s compost goes on to support the success of larger agricultural and reforestation projects.

+ In Port-au-Prince alone this year, we have sold more than 1,000 bags of Konpòs Lakay compost! That’s nearly 20 metric tons of organic fertilizer that’s already in the ground nurturing soil health throughout the country.

+ SOIL’s teams in Cap-Haïtien are going to have to help us keep up with the demand for compost sales in Port-au-Prince by sending some of the compost produced in the north to fill orders in SOIL’s Port-au-Prince office.

+ Every year, SOIL establishes a set of key performance indicators (think tons of waste treated, tons of compost produced, and tons of compost sold) to track our impact. We actually reached our ambitious goal for compost sales for this fiscal year an astonishingly four months early!

These successes and insights into how and when sales happen will help inform our approach in the months to come as we strive to expand our impact. An enormous chapo ba, or tip of the hat, to SOIL’s hard working compost teams for making it all possible and to our supporters in and out of Haiti for being a part of our efforts. 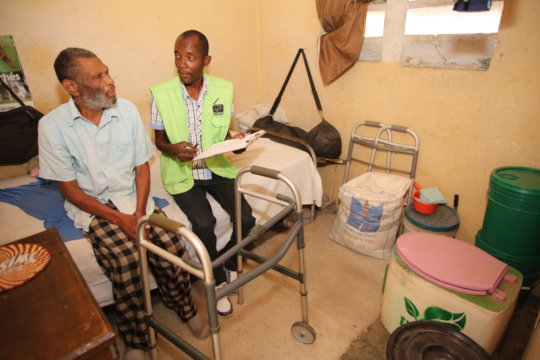 We talk a lot at SOIL about increasing access to sanitation in Haiti. We’re hard at work to expand our programs every day as we work to build a city-wide sanitation service in a country where 75% of people lack access to a toilet. But what does it mean to build a service that’s truly accessible?

As we work to expand our EkoLakay service into new homes and new neighborhoods in the years to come, we’re also thinking about expanding access in a different way. For people with different levels of physical ability, making your way to a room far from your bed to use the restroom can be a huge challenge. With that in mind, SOIL designed a toilet that could be portable, so that people like Jean Nelson, who has a physical disability constraining his mobility, are able to install it directly in their bedroom. Jean Nelson told us that this is one of the primary reasons that he decided to join SOIL’s service in Port-au-Prince. Our weekly collection service helps, too. Every week a SOIL team member passes by each and every house to collect full containers of waste and provide clean containers of carbon cover material, making maintenance easier for clients of all abilities.

The design of SOIL’s household toilets and maintenance service has undergone an iterative process throughout the years. By working closely and intentionally alongside members of the communities we serve, SOIL is proud to have designed a sanitation solution that meets the needs of our customers and is more accessible to people with disabilities than traditional systems. And we’re not done! We continue to partner with both local communities and sanitation researchers across the world to gather feedback and adapt our model to make it the best it can be.

Follow this link to read about SOIL’s ambitious plans for the years to come and don’t miss our latest annual report here.