JOSHUA, ONE OF OUR LITTLE PEOPLE. 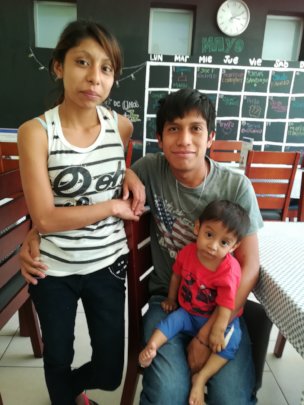 Joshua and his parents

Emilio, a young native of the Nahuatl ethnic group, was 20 years old when he decided to leave his father's home in Tlalnepantla, a community in the municipality of Tamazunchale, to venture to look for work in Monterrey, NL, since it is a huge city where many people from the Huasteca region will seek better employment opportunities. He was hired as a bricklayer and there he met Francisca, a girl a year younger than him, who worked cleaning houses and who is also from Tamazunchale.

They fell in love and decided to move in together. They spent three years and sought a baby, who was born healthy and beautiful. They called him Joshua. Francisca stopped working and stayed at home caring for her baby, until one day they realized that Joshua's stomach was too inflamed, they took him to the doctor and he gave them a terrible news: Joshua had a tumor called Hepatoblastoma, that is to say: a cancerous tumor in the liver.

Given this diagnosis, they decided to return to their land and bring it to the Central Hospital of this city, since it is the only place in our State that provides oncology for people with limited resources. Once in the hospital, the Social Worker of our institution registered this new patient, made a file and invited her parents to be able to offer them the supports that we granted.

Joshua is currently one year and five months old and one month in treatment; The pediatric oncologist has high hopes that he will respond well and, in several months, he can overcome the cancer that attacks him. His parents pray a lot for their baby to get ahead and we at AMANC SLP provide them with material things, all the love, understanding and tenderness that both the child and their parents need ... 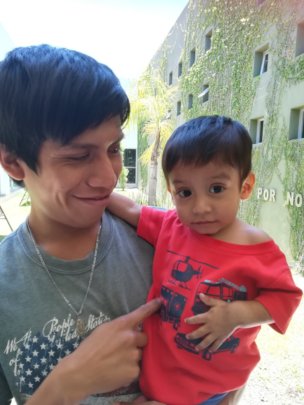 ITZEL, A HISTORY OF VALENTIA. 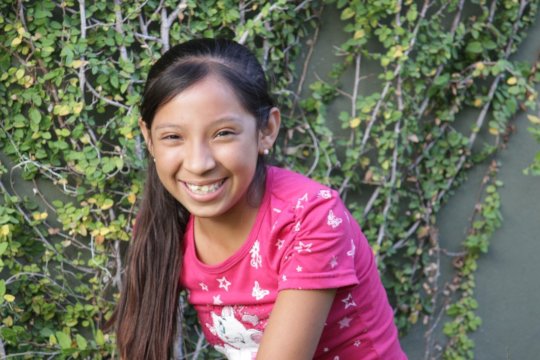 It was on April 2, 2009, when AMANC SLP received Itzel, a three-year-old girl whose diagnosis was: Wilms' tumor, which is a malignant neoplasm of the kidney. He arrived with his mother: Victoria, after spending a few days at the Central Hospital.

They lived in Ciudad del Maiz, some 207 kilometers away from this capital city. Immediately Vicky (an affectionate way of calling mom) and Itzel felt part of the AMANC SLP family, characterized by their great smile and their happiness despite that difficult experience that they began to live by knowing about the cancer that was attacking the girl.

Itzel's treatment was successful, after two years she was discharged and a stage called "vigilance" began, in which the patient is monitored by occasional medical studies to ensure that the cancer has not returned. Everything was going very well, when in February 2012, Itzel's mother was diagnosed with a type of cancer called Melanoma. At that time, the woman was 3 months pregnant and when the doctors suggested interrupting her pregnancy to start chemotherapy, she refused because her baby's life was more important than hers.

Vicky continued to accompany her daughter to medical consultations. At times, she felt very bad and since the AMANC SLP trip to the hospital takes about 10 minutes walking, she stopped several times to rest. The girl, who at that time was 6 years old, told us that her mom told her that, if she fell asleep without waking up, she would run to AMANC SLP to warn us to go where she was, but fortunately that never happened.

They had to wait until he was 7 months pregnant to perform a caesarean section and once the baby was born he started his oncological treatment, but it was too late ... Vicky passed away in July 2013, leaving her baby, Itzel and two other older girls.

Currently, the two oldest sisters are married and the children live with one of them. Itzel is in high school and lives with her little brother whom they called "Angel of Jesus", the boy whose mother did not want to have an abortion to save her life. Her dad lives in Monterrey, N.L. He does not visit them, but he sends them money when he can.

We need about 300,000 USD annually to provide all the support we provide to 465 children and adolescents with cancer today, to whom we also give love, understanding and empathy.

Everyone at AMANC SLP remembers Vicky with a lot of love and we are sure that Itzel is a happy young girl despite the circumstances that she had to live. 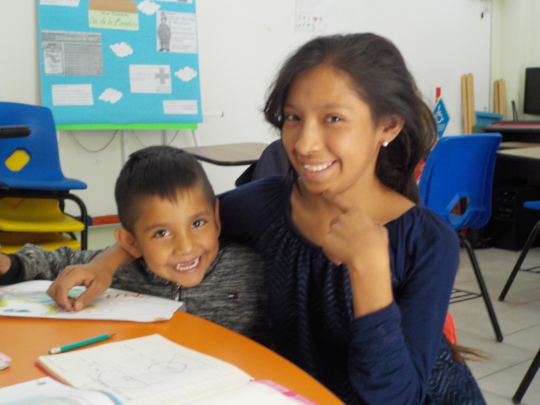 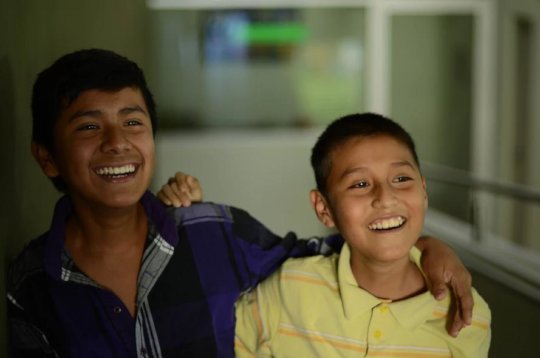 Joab and Juan did not know each other before they reached AMANC SLP. Both, living with their parents and brothers, without knowing that one day their lives will change radically.

Joab began to feel bad, his father took him to the health center of his community called Agua Zarca in the municipality of Tamazunchale, where the doctor told him that his son had something serious, that he had to be moved to San Luis Potosí , to the Central Hospital 8 hours away, for more specific studies. At that time, Joab was seven years old ... he was diagnosed with Non-Hodgkin Lymphoma ... For his father it was a hard blow and for the child, despite the painfulness of the treatment and how bad it felt after the chemotherapy, he started a new life in AMANC, in San Luis Potosí. He has always been a very restless child, eager to learn everything, excited by so many new things that the great city has and with a great charisma that earns the affection of the people who know him and from whom he receives many gifts and attentions. So three years passed in which he took his treatment to the letter, with his parents worried about him. His father was the one who took the most time to take him and accompany him to the hospital every time he was hospitalized for his chemotherapies and medical studies, since, being indigenous his mother speaks Nahuatl and little Spanish, so the lady was coming in few occasions.

Juanito, however, lived in Tancuilín, municipality of Matlapa, went to the school of his community, but began to feel pain in his feet and knees and to have a fever that did not give up. His parents, concerned, took him to the Hospital of the municipality of Axtla, which is 60 minutes by bus from Matlapa, where they confirmed in July of this year, that his son had cancer in the blood: Acute Lymphoblastic Leukemia and had to move it to this city, to the Central Hospital. The child arrived serious, with 800 mg / dl of blood glucose, but is currently at normal levels and takes his treatment properly. Sometimes his father brings him, but mainly his mother is the one who accompanies him. They are indigenous, they speak Nahuatl and Spanish fluently.

On one of the occasions when Juanito was in our facilities, Joab also received his medical check-up and, as they stayed several days with us, they became great friends.

AMANC SLP has treated more than 600 children and adolescents with cancer, of limited resources in the more than twelve years we have operating in San Luis Potosí and we have witnessed these great friendships that arise between our beneficiaries and their families and that last for all life.

Thanks to that we provide them with lodging, food and pay for all the medicines and medical studies that the Popular Insurance does not cover, they have a safe, clean and comfortable place to arrive in this city, and they also find friendly, cheerful and empathetic people. The cost per child annually is $ 1500 to cover the comprehensive support we provide. Fortunately, Joab is very well, currently is 13 years old and is in surveillance stage, so he comes to AMANC SLP three times a year. On the other hand, Juan, who is 11 years old, is in treatment, he must go to the hospital more often, but he knows that, following the instructions of his treating doctor, he will be as good as his friend. They are in constant communication and we are very happy that they can reach this center to meet, share and grow in that friendship! 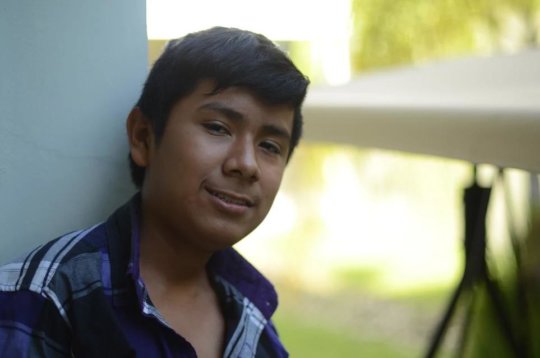 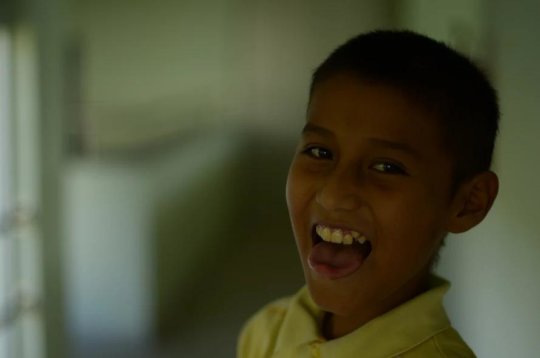 Juan
‹ 1 2 3 4 5 6 ›
WARNING: Javascript is currently disabled or is not available in your browser. GlobalGiving makes extensive use of Javascript and will not function properly with Javascript disabled. Please enable Javascript and refresh this page.