Through the Eyes of Our Nurses 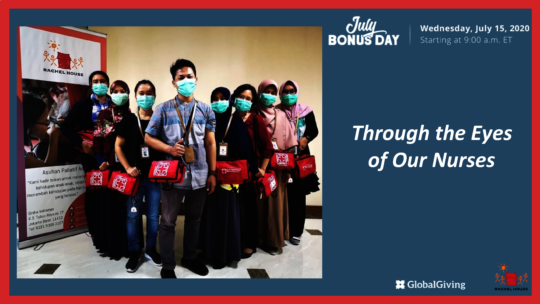 COVID-19 pandemic has dramatically altered all our lives. Perhaps amongst the people most impacted are those providing care for people living with life-threatening illnesses. The “frontliners” as they are fondly called.

As we continue in this new reality gripped by the horrific tales of the pandemic, we speak to some of Rachel House nurses to ask them about their fears and worries, their hopes, and inspirations.

Through their eyes, we hope to share with you a glimpse of the reality they see as they continue to provide care to the children from some of the most marginalized communities in Jakarta, and the inspiration that keeps the light in their hearts burning bright.

This is the work of our amazing and courageous “frontliners”.

Please do join us on this journey to add life to the children’s remaining days. Especially now.

Your donation made on 15th July 2020 will allow us to benefit from GlobalGiving’s July Bonus Day.

Our grateful thanks in advance for your kind and generous support. 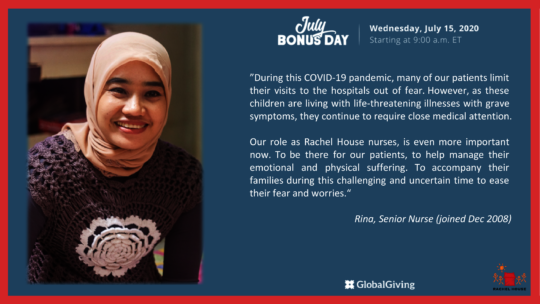 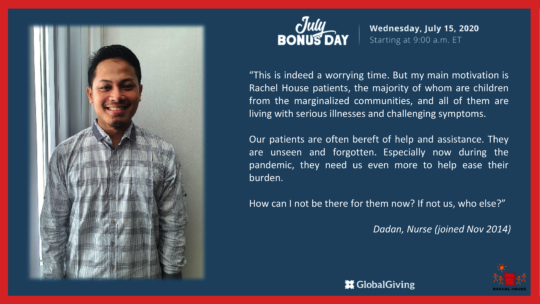 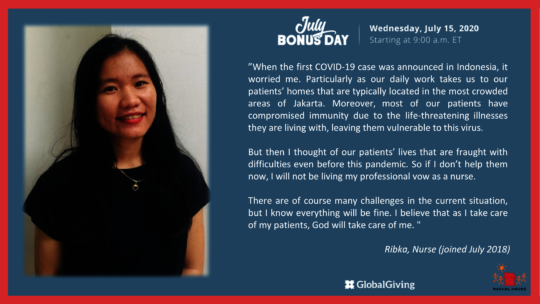 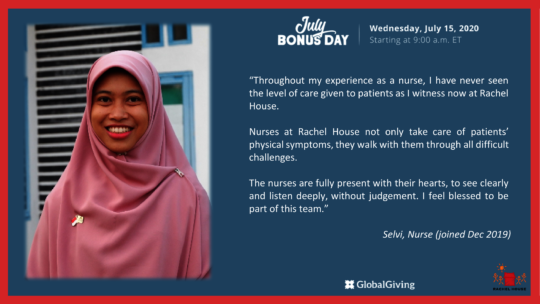 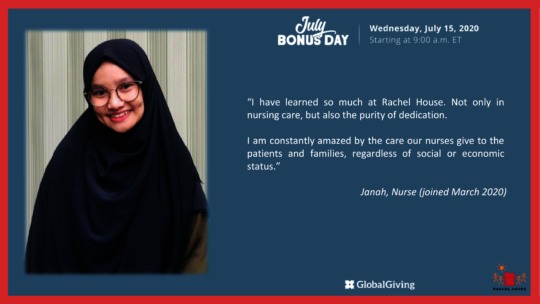 The Boy Who Stole Our Hearts 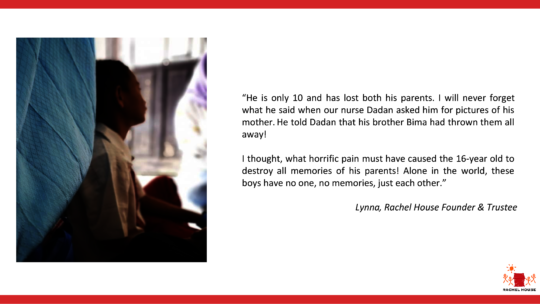 Rehan is a courageous 10-year old boy whose story has touched all our hearts.

Rehan is confronted daily with the challenges of an immunity compromised body, causing severe malnutrition coupled with maddeningly itchy skin fungal infections and ever-present diarrhea and oral candida. All combined would drive anyone into despair.

Both Rehan's parents have died, leaving Rehan in the care of his teenage stepbrother, with no other support system. They live in a tiny rented-room in heartbreaking condition. While his brother works as a motorcycle taxi driver from morning to night, Rehan has to fend for himself. This means that the 10-year old often misses his medications in the absence of adult supervision. Eating only 1 meal a day has also presented a challenge when medications often require a full stomach.

Since Rehan came under Rachel House's care, Nurse Dadan has been like a father to these boys - attending not only to Rehan's medical symptoms, but also his nutritional, social, and emotional needs. He has rallied support from the entire Rachel House family to help clean and refit Rehan's home, provide nutritious meals to support the brothers' health and wellbeing.

We hope the photo journal will help tell Rehan's story and how he has stolen all our hearts.

“Please give us your support and make your donation on July 15th, 2020 to benefit from GlobalGiving’s July Bonus Day” 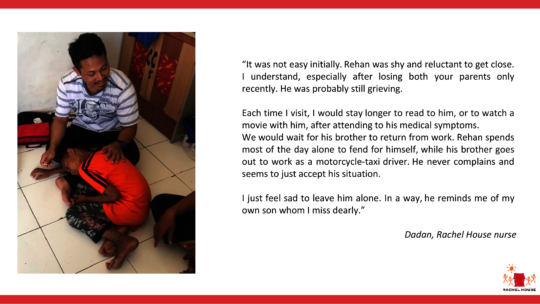 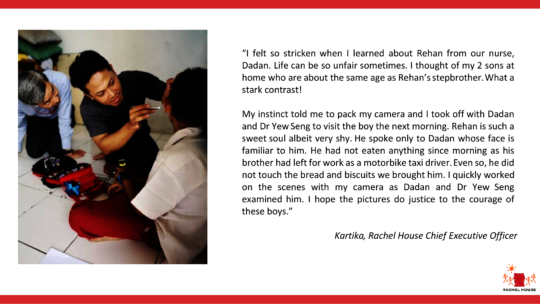 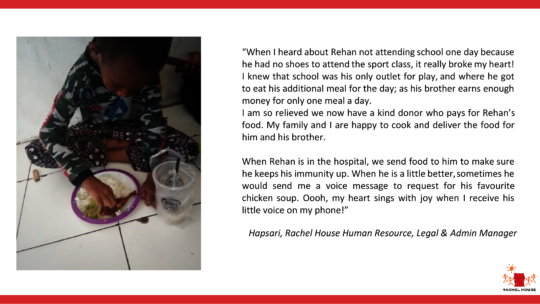 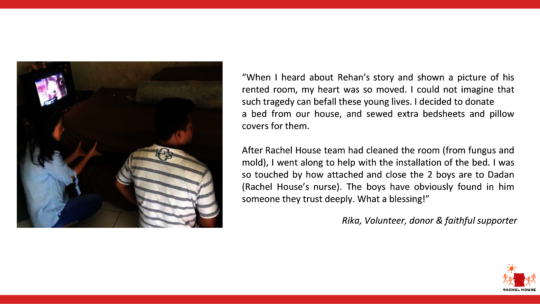 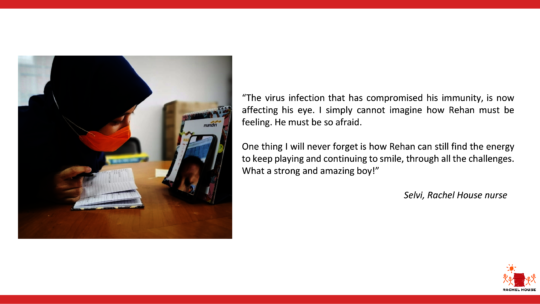 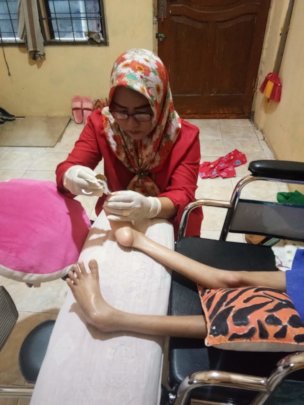 I first met Aldi* in early March 2020 with Dadan, the Rachel House nurse assigned to take care of him. Before the visit, I was prepared by Dadan about Aldi’s diagnosis; that he has nasopharyngeal cancer (or nose cancer) since 2017. Cancer has now spread (metastasized) to the tissues that cover the brain and his spinal cord (the leptomeninges). I was told that Aldi is referred to Rachel House to help manage the complicated symptoms at home.

I must admit I was totally not prepared for what I would encounter when we entered the house – Aldi’s uncle’s rented house. Aldi and his mother have been there since they arrived in Jakarta in search of treatment for Aldi’s condition. Aldi’s father and his brother remained in the Lebak Regency in Banten – about 140 km from Jakarta.

Aldi is 17 years old. Three years younger than my son. I can see how weak he is, lying motionless in bed. As Dadan speaks to his mother, I could see Aldi’s eyes open from time to time. His breathing is labored, aided by oxygen supply. His mother told us that Aldi is not able to open his mouth without experiencing pain and that the metastases of cancer to his spinal cord has caused paralysis of his lower body and legs.

We enquired about Aldi’s hopes and dreams. According to his mother, Aldi has been tossing between the desire to go home to see his father and brother, and the determination to fight on to get better. I remember leaving the house that day feeling the heaviness of impending sadness.

In the following weeks, I watched as Dadan develops a beautiful relationship with Aldi, a bond forged with a young man who is missing his father terribly. Slowly, Aldi began to voice his deep longing to be home. Initially, it was just a passing thought; but as time passed, these words carried a sound of urgency.

Dadan and I discussed this back at the Rachel House office. With the Covid-19 pandemic in the background and the increasing number of restrictions being imposed on people's movement, we realized that time may not be on our side. And the clock has been ticking softly but surely for Aldi. We made calls to countless ambulance and transportation companies, friends, and families with cars – checking if anyone would be willing to drive Aldi home. As more and more rejections came in, we realized the enormity of the challenge. The race against time was present in all our minds.

I could not shake off Aldi’s simple yet seemingly insurmountable wish from my mind; a rock sat heavily in my heart. When I got home I told my husband about Aldi, and his wish to go home to be with his father and brother. I was surprised by his matter-of-fact answer, “I can drive him – if someone can pay for the fuel.”

Without even stopping for a breath, I picked up the phone and called Dadan to let him know of the possible solution. Within hours, we found a donor for the fuel, informed Aldi and his mother, and with Dadan in the car, we made our way to Aldi. When we arrived, I was struck by the smile on Aldi’s face. First smile. A precious gift.

Dadan had prepared a bag with all the medications Aldi may need for the long journey and at home. I had prepared food and drinks for their car journey. As the sun was just rising in the east, Dadan and I bid Aldi and his mother farewell. Bittersweet feelings. I knew in my heart that we will not meet again.

Aldi made it home safely. He had 2 wonderful days of reunion with his father and his brother. He passed away on the morning of the third day. 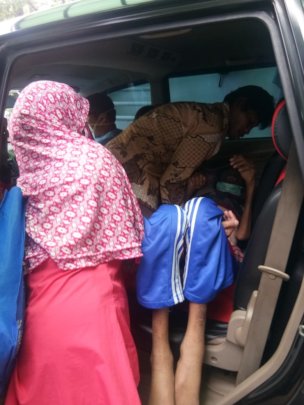 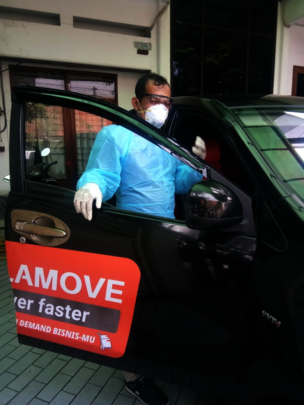 ‹ 1 ... 3 4 5 6 7 8 9 10 ... 25 ›
WARNING: Javascript is currently disabled or is not available in your browser. GlobalGiving makes extensive use of Javascript and will not function properly with Javascript disabled. Please enable Javascript and refresh this page.