Being part of the battle against HIV epidemic in Moscow

Since 2009, we provide harm reduction services to people who use drugs in Moscow. The political and financial climate as well as the epidemiologic situation are not very supportive for our work – Russia still has one of the fastest growing HIV epidemics in the world with more than 1 million cases being registered and more then 50 000 HIV positive people living in Moscow. Officially registered number of people who use drugs living in Moscow is over 30 000 people. Unsafe injection of drugs is still the major cause of HIV transmission in Russia (more than 60% of all new cases), HIV epidemic is escalating in the country and its capital, but the government still denies the effectiveness of harm reduction measures and provides zero support to NGOs working on HIV prevention among key affected populations. Russian drug policy is still known as one of the most conservative and repressive among those around the world – it continues to declare a zero tolerance towards drug use inflaming the stigma and discrimination towards people who use drugs because of their drug dependence and primarily they are considered not as patients who need proper treatment and support but as criminals. It restricts the access for drug users to vitally important for them information on health issues and to the health services needed such as needle exchange programs and opioid substitution treatment.

Recently the Vice News filmed our work on HIV prevention among people who use drugs on the streets of Moscow. We would like to share this video with you as it also explains the political conditions we are working in as as well as the attitude of the officials to the problem of HIV epidemic in Russia.

“There is no political will to face the truth,” sais our outrech coordinatir Maksim Malyshev, in the video. “Instead of writing reports saying that we are working on it and that everything is going as planned, they need to admit that things are bad — really bad.” 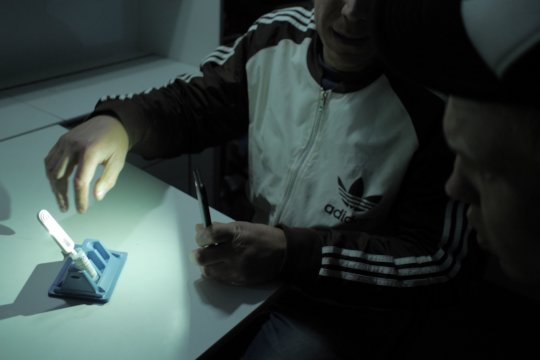 HIV testing and counseling in our minivan

Before the end of 2017, I would like to thank you once again for your unceasing support of our work on providing essential services to people who use drugs in Moscow. I also wanted to briefly share with you some heartwarming results of our work in 2017.

Unfortunately, in 2017 the health crisis in Russia keeps aggravating - unlike in other countries of the world the HIV epidemic is on the rise, especially among people who use drugs. Hepatitis C treatment is not available to people in need, and around 9000 overdose deaths were officially registered last year. The government of Russia is very persistent in its opposition to effective, evidence-based and humane approaches, such as opioid treatment and harm reduction. Our organization and like-minded NGOs remain under constant attack of the authorities - which included us in the Foreign Agents registry, fined and punished for our work. Russian drug policy is still one of the most conservative and repressive in the world. But despite all that, we believe we must resist and to keep helping our community and friends, even in this oppressive political climate.

One of ARF's most important activities is the harm reduction project -- the only one in Moscow -- that provides services, support, and prevention materials to people who use drugs. Most of our participants are very poor and very marginalized people. Some of them are homeless, some are migrants, some are sex workers. Some don’t have any documents, many struggle to support themselves and their children and almost everyone faces legal problems. Our work helps people to improve their health, protect them from infections and overdose, but most importantly, we treat people with loving, dignity and respect that they deserve.

Here are some numbers: in 2017 we served around 3500 clients and provided 222.105 clean syringes and a little over 41.000 condoms. We carried out 1 138 counseling sessions on HIV and hepatitis and provided 324 HIV rapid tests, 26 of them turned out positive.
We distributed informational materials on health and legal issues and a newspaper for drug users. We provided 1233 individual consultation on overdose and 3573 ampules of Naloxone - a medicine that prevents the overdose death. We ask people to come back and tell us if there were able to save their friend's life with the help of Naloxone. In 2017 we received a record number of such reports -- 416 lives were saved with the help of Naloxone, and these are only those people that we know of for sure!

Besides working on the streets, we accompany our participants to health and social services, to drug treatment if opportunities arise. We help our project participants obtain the medical and social assistance they are entitled to. We also document cases of human rights violations and assist people who want to act and protect their rights. This year our participants have submitted 40 complaints to different government structures regarding violations of their rights. 207 participants received legal support, 82 participants received support in restoring their official documents. We have over 25 legal cases submitted to the European Court on Human Rights which aim to strategically challenge the repressive Russian legislation and practices.

Finally, we run a number of tiny sweet projects that help to make the lives of our participants a little bit happier. Among them: activities for children of people who use drugs - we take them to theaters and museums, organize parties where they can spend time with their parents, right now we are preparing for a New Year celebration. We also host several support groups, a cinema club, a women's club, and various social activities for our participants.

2018 is going to be a challenging year for us since we will not be getting the financial support of the Global Fund to Fight AIDS, tuberculosis, and malaria any longer, and no other major donors have emerged on the horizon so far. But we believe in our cause and will keep our little fight for the lives and health of our community and the humane drug policy in Russia. In this, we feel very much supported by our friends and like-minded people like yourselves, and we are very grateful for this support.

We wish you fun holiday adventures and a very very happy 2018!

With deep gratitude, on behalf of the team 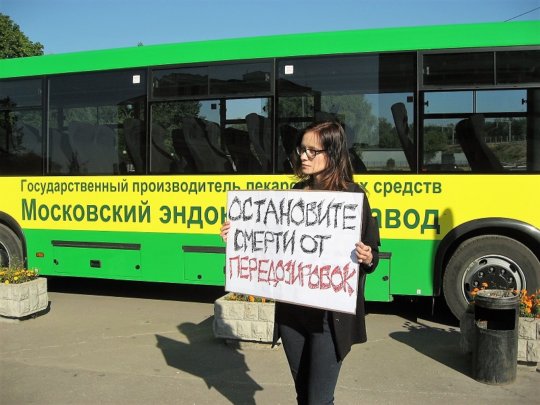 On August 31, the International Overdose Awareness Day, activists of Andrey Rylkov Foundation and Forum of people who use drugs in Russia picketed the Ministry of Health and the Moscow Endocrine Plant. The action aimed to draw the attention of the society and the state to the problem of opiate overdoses in Russia and to protest the government inaction on the matter.

In 2016, the Chief Narcologist of the Ministry of Health of Russia, Evgeny Briun, reported that almost 8000 people die from overdoses in Russia every year. [1] For comparison, in 2015, an unprecedented number of overdose deaths (8 400) was registered in 30 states (28 countries of the European Union, Turkey, and Norway). [2] Naloxone – the medicine which helps to save lives in case of an opioid overdose, remains inaccessible for people who use opiates in Russia as it remains a prescription drug. For the same reason, the public health NGOs working with drug users are not able to purchase and distribute naloxone.

The activists handed over petitions demanding that the Ministry develops a consistent strategy aimed at reducing the number of overdoses in Russia, and ensures that naloxone is accessible over-the-counter.

Our action near the Ministry of Health went smoothly. Security guards remembered me from the last time, and it seemed like they were happy to see me again. They remembered the “Support, don’t punish” action last year, thanked for the traditional photos, one of them was very interested in our plans and asked when the journalists were going to arrive and whether we remembered that petitions should be submitted to the office number 3.

The passers-by were passing by taking a blind eye. One guy asked me what kind of overdose causes deaths and hearing the answer “overdose of drugs” gave a valuable advice not to use drugs. It reminded me of what drug users used to tell me countless times that they wanted to quit but they simply can’t.

The security guard and I discussed the issue of drug dependency for a long time, whether it should be treated as an illness or a form of debauchery, whether the state should or should not support people who use drugs and ensure their access to medical care. We discussed that too many people are imprisoned for simply using drugs, and my companion responded enthusiastically: “Well, of course, they don’t have to be kept in prison!” (and my heart leaped). “They should be just shot!” But at least the police didn’t appear this time.

Our picket at the Ministry of Health went on in a warm and friendly atmosphere. The visitors of the building and the security guards attentively examined my poster “Naloxone without prescription” and expressed their interest. Passers-by also paid some attention but to a lesser extent. So, my picketing turned out to be a form of visual agitation.

We had a poster “Stop deaths from overdoses, ” and the three of us came to the Endocrine plant (a plant that produces Naloxone). At first, we went to the entrance checkpoint, but the guard ran out shouting that we were trespassing and tried to push us down the road.

Later, the guards approached us and said: “our drugs relieve the pain of patients who have cancer, they are not made for drug addicts!” And then I realized that they thought we were protesting against drugs. We explained to them that we demand access to naloxone for people who use drugs, that we aren’t against opioid drugs and that August 31 is the International Overdose Awareness Day.

Then we went to the administrative office and filed the petition. 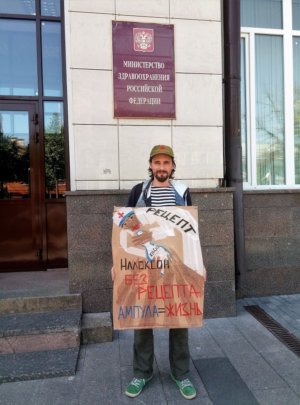 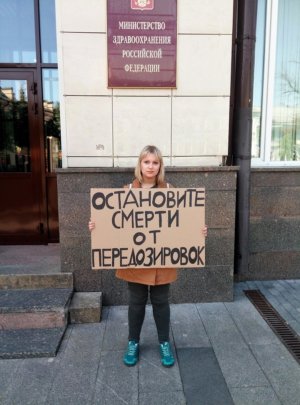 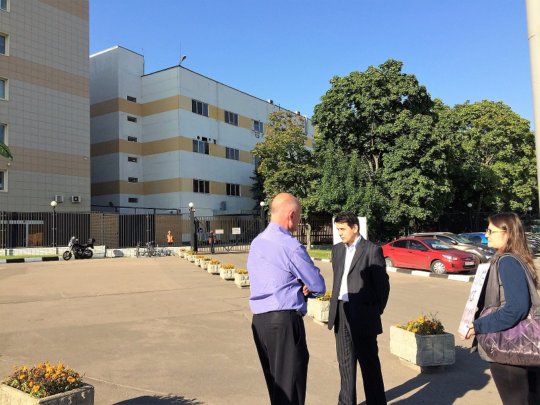 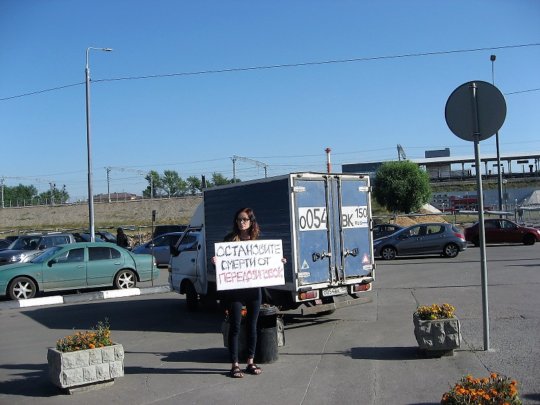