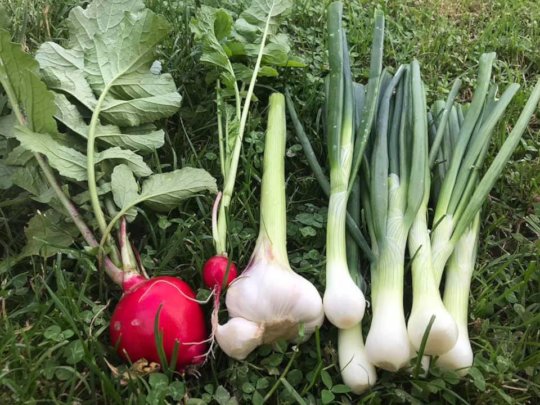 The situation regarding COVID-19 has already made economic changes. Many people are losing their jobs and are fearful about the coming time after the pandemic ends.

To address this problem Center for Peacebuilding has offered their land on the Peace farm in Sanski Most for the community to plant vegetables and work on food production. This will give the members some kind of control and security in these uncertain times. Selmir, CIM’ volunteer shares his thoughts:

“We have so many natural resources that remain unused. Although this situation has terrible consequences, and the phrase which comes up in the news “the world will never be the same” implicates firstly a horrifying scenario, we think it can be an opportunity for growth and changing of our mindsets and finally behavior. We need to get back to agriculture and food production and use our resources. The benefits are enormous!”

In recent months in our garden of opportunity we have planted many vegetables, made a corner for flowers and every day we see more and more progress We also cleaned the forest and made some banches for sitting. We are so happy to see our garden becoming more beautiful and full of new fruits every day.

Our local volunteers were such a great help for us and also the Volunteers club in Sanski Most they also gave their help and support in developing the garden.

As the situation is slowly getting better, Center for Peacebuilding will host the Peace Camp at the Peace Farm on the 26th of Juny till the 3rd of July, of course respecting all epidemiological measures prescribed by the crisis headquarters.

We now have two volunteers from Banja Luka, Milena and Slavica, former Peace Camp and Caravan participants, which decided to stay at Peace Farm and help us out in the garden and being a help for our future activities there.

In the coming months we can expect to pick our vegetables, which will of course be distributed to our volunteers who have helped us through these months. We also made nettle juice that goes on sale to local people. 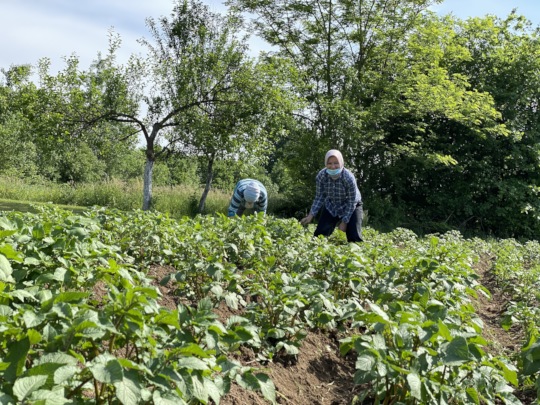 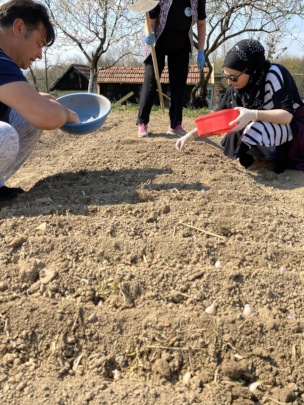 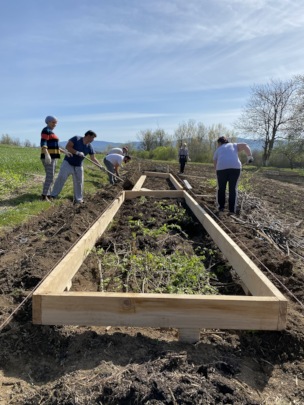 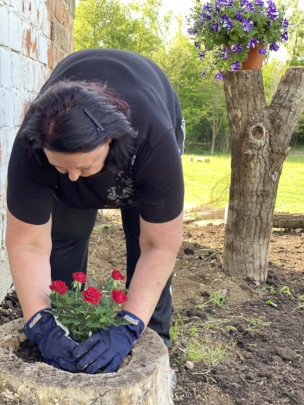 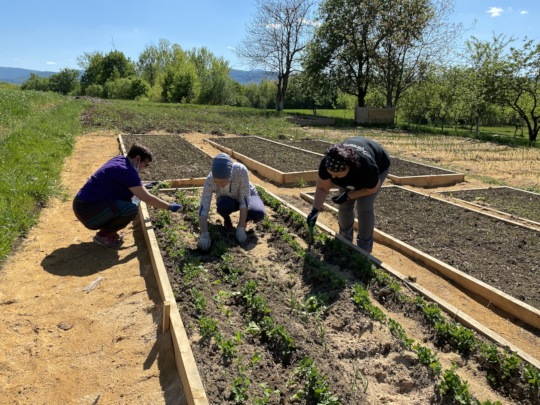 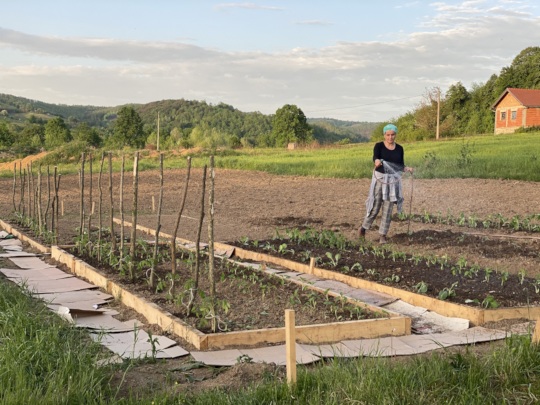 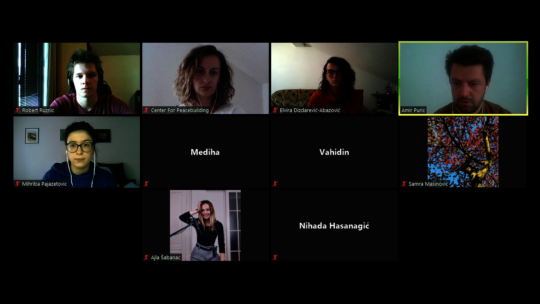 We hope that you are all okay, healthy and safe at your homes.

Before the start of the pandemic COVID-19, CIM's Peace Camp and Caravan participants which was held in December last year have implemented their local initiatives in February and March. The local initiatives were held in Doboj, Banja Luka, Sarajevo, Olovo and Sokolac and the youth from these communities had the opportunity to attend workshop on the subject peace and reconciliation.

After canceling all local youth initiatives planned in March and April because of the state of emergency caused by the COVID-19 pandemic, CIM staff has worked on a strategy to organize them online. We have held several online meetings with the team members to find a solution and adjust their working agenda to online workshops.

The first online workshop was held by the participants from Jajce, the two-day local youth initiative of Jajce “Peace activism in period of social distance” was organized on April 16th and 17th. During the first day the former Peace camp and caravan participants held a workshop about prejudices and stereotypes. On the second day, youth workers held an interactive workshop about youth activism.

The  next was the two-day local initiative of Velika Kladuša “With knowledge to peace” which was organized on April 18th and 19th via Zoom platform. During these two days 10 youth from Velika Kladuša had the opportunity to learn from the journalist and activist Amir  who is the recipient of a special plaque awarded in the frame of the Journalist Award "Sran Aleksic" for professional reporting in year 2019. The main topic of these workshops was media literacy. The youth defined media literacy as ability and skills to filter a great amount of information and extract the true ones.

On the April 25th and 27th the local initiative of Bijeljina named “Art and peace are not slogans but life” was organized via Zoom platform. In total 20 youth from Bijeljina and Sarajevo attended this activity. On the first day volunteers of PRONI club in Sarajevo, held an interactive workshop about teambuilding. On the second day, a psychology student and volunteers of PRONI youth club from Bijeljina Irena held an interactive workshop about stereotypes and prejudices. Through a survey she explained the definition of stereotypes and prejudice, the differences between them and the examples of them

The local initiative of Stolac called “With art to peace” was held on May 4th via Zoom. First, Davor who is a former Peace camp and caravan participant and an aspiring actor shared his experience and ways of using art in peacebuilding.  Dalila is a lover of fine arts. She showed her art work created during isolation. She emphasized the calming effect art has for her and the importance of finding an activity that makes us relaxed and satisfied. Amar and Adel are independent amateur musicians. They played various songs on a guitar and showed the magical effect of music by connecting people across the country and even region.

Local initiative of Mostar – “Shock seminar” was organized on May 4th via Zoom. The coordinator of PRONI youth club in Mostar held an interactive presentation about I-speech which is way of assertive communication. After this short but useful and concrete topic, a member of a theater group from Mostar spoke about his work and experience by working on peacebuilding in his community. He organized a theater performance which focused on the present division between Croats and Bosniaks living in Mostar. Through his work he wants to emphasize the absurdity of two sites of the city and the on going division, hate and distrust. And the third short presentation was about meditation and yoga, and the benefits she noticed practicing it.

On April 21st the initiative #letstalk from the former Peace camp and caravan participants and the Volunteers club from Sanski Most has officially started. #letstalk is conceived as a platform where youth can talk, discuss and exchange about various topics interesting to them and host guests like activists, athletes, psychologists, actors, musicians. After a survey started on Facebook, the youth choose to talk about books at the first meeting. Milena, a former Peace camp and caravan participant moderated this meeting.

The second meeting of youth – Art in Peacebuilding was held on April 25th. The guest and moderator of this meeting was Davor, a former Peace camp and caravan participant and amateur actor. He spoke about the role of art in peacebuilding. The participants discussed what art means for them and tried to find a definition of art.

For this next meeting the youth invited the director of the association Forgotten children of War Ajna. Although, her name and story are well known for citizens of Bosnia and Herzegovina, she shared her life experience with the participants. Ajna is a child of a women who was a victim of sexual violence – rape during war 1992-1995. She started to talk about the stigmatization her mother and she as her child were experiencing living in a small community. Her childhood was marked with bullying and rejection of the peers, community and, in her words “whole country”. After she waited over twenty-three years, she decided with other children of sexual violence during conflict to establish the association Forgotten children of War. The mission of this association is to change the mindset of society towards victims of sexual violence, reduce stigmatization and give psychological, social and legally support.

After Ajna, Larisa was the guest on the #letstalk platform. Larisa is a 29 year- old Bosnian judoka, and most successful Bosnian athlete ever. On the 30th of April, 12 young people talked to Larisa about the position of sports in Bosnia and Herzegovina, and the role of sports in society in general. During the 60-minute conversation, young people asked questions such as: "How to motivate young people to do professional sports?", "What does a professional athlete's day look like?", "How does sport help to overcome problems in society?" etc.

Let’s talk with Amel was held on May 7th via Zoom. Amel is a Bosnian athlete. He is currently the most trophy athlete in Bosnia and Herzegovina. His disciplines are short and medium track, and in these disciplines, he has set two national records and numerous European records. Looking at his successful career he emphasized the importance of one thing – dedication.

On the fifth of June the former Peace camp and caravan participants hosted Uroš, an actor and youth activist from Novi Sad, Serbia. Davor  moderated this meeting. Uroš introduced himself and his work from the beginning in the area of acting. Uroš presented the work of a theater group “Teatarnova” a project which enables youth to express themselves through theater. In the second part of the meeting he asked the participants to actively participate in reading and acting in a dialogue.

After the decision of separating Peace camp and caravan, CIM has published the call for participants for the Peace camp which will be organized in the period of June 26th till July 3rd. The call was officially published on CIM’s Facebook page on 8th of June.

We want to thank everyone who has been helping and following our work during the pandemic.  We wish you all who is reading this health and safety during this time, and don’t get unmotivated because our youth showed us that they you can do a lot of great work online too. 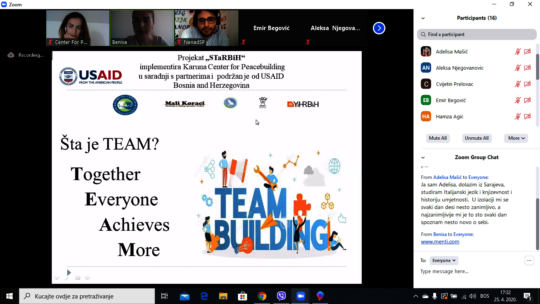 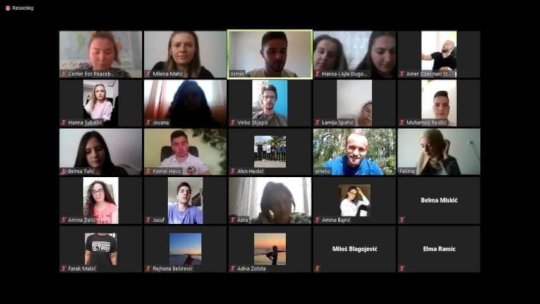 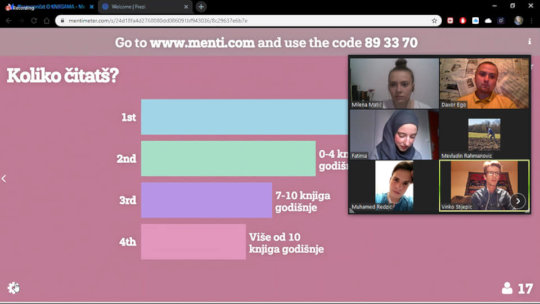 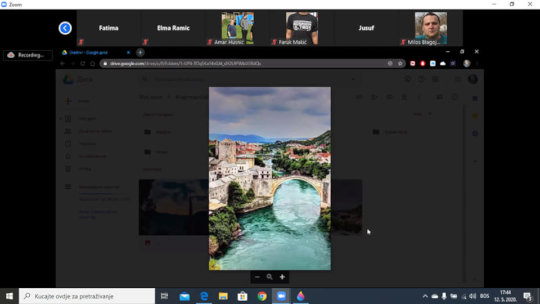 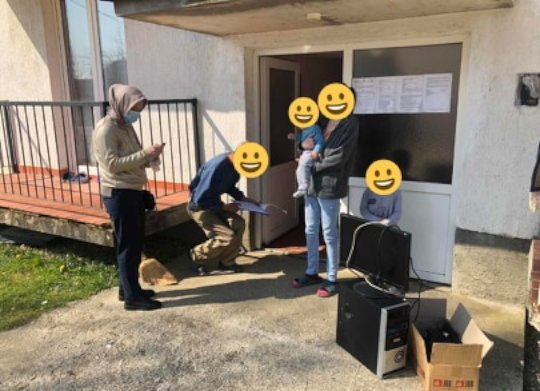 Dear all,We hope that everyone is doing okay and hopefully safe and strong at home.First we want to thank all of you who donated to this project and helped us provide children equipment for their online classes. Since the beginning of the action #stayconnected we got a lot of donations from our community in Sanski Most, foreign donors and with the help of you all across the GlobalGiving platform.

We have reached our goal and we were able to provide equipment to chlidren who needed it which helped them to follow their online classes whose cause was the emergence of the COVID-19 pandemic.

With the help of these donations, we managed to enable 36 children from primary and secondary schools in Sanski Most to attend online classes.During the action, 16 computers with equipment (webcams, microphone, headphones), 9 laptops, 10 smartphones and iPods and 1 tablet were distributed.

With this report we want again to thank everyone who contributed in helping our children to follow their online classes. 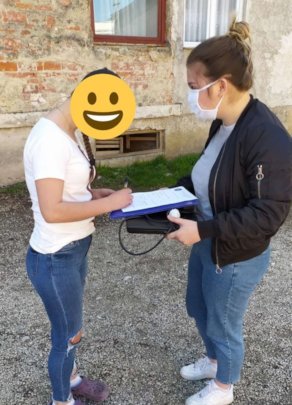 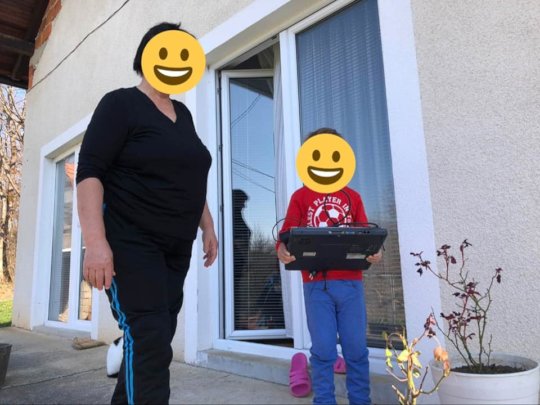 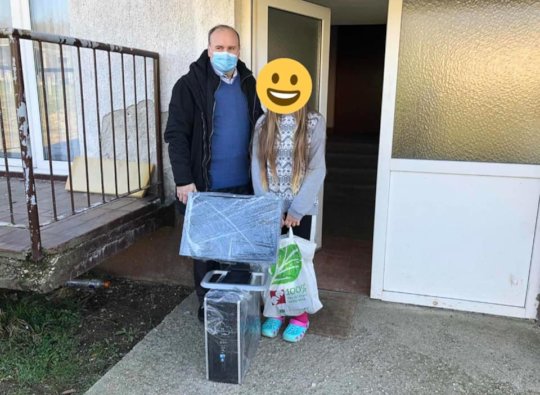