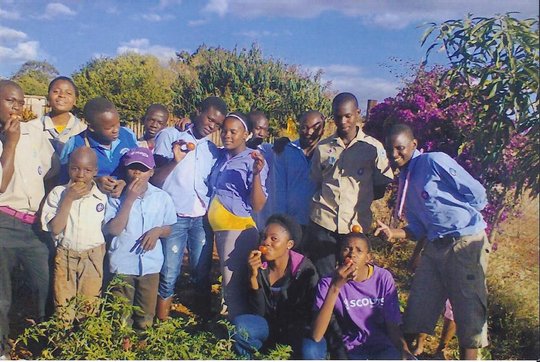 Scouts enjoy the fruit of their labour

Dear Friends and Partners of Keep The Dream196,

Well its September and its been a whirl wind year for us and our kids but first I want to sharel the impact that we have had over the last 10yrs. YES! We have been going unofficially for 10yrs. We started in November 2003 with 13 girls in our first group. By May 2004 we had 60 children. We trained 50 new leaders in May 2004 and dramatically climbed to over 1,000 children. My collegue and co-founder Elizabeth Mabuza and I were totally ill prepared for the explosion of kids and needs that we both decided in August 2007 to quit our formal jobs as nurse and teacher to start Keep The Dream196 at the beginning of the Global Financial Crisis.

The Global Financial Crisis is not only gripping individuals and multi conglomerates but nations, it was a gamble which has proved well worth it. I want to take this opportunity to thank you all for your commitment and I trust that you will continue to support the work that we are doing and the lives we are changing by partnering with us in Building Tomorrow Today.

1) Limpopo Province has a teenage pregnancy rate of 13% we have reduced that rate to 0.07% for 10yrs. We should be seeing approximately 170 pregnancies a year. We have had less than one pregnancy per year over the 10yrs.

2) Limpopo also has a HIV rate of 21.5% with the worst affected being females aged between 15-25yrs. With this pregnancy rate the youth are either abstaining (which they assure us they are) or are protecting themselves from unwanted pregnancies and HIV in the process

3) Limpopo Province is one of the worst for matriculation rates ie 47%- 55%.In 2008, 100% of matriculants in our program passed their matric. In 2009, 100% passed. In 2010, 100% passed. In 2011 89% passed and those who didnt returned to school to try again. In 2012, 54% passed but all have continued on to technical colleges, tertiary education or returned to improve their marks in secondary school. The decline in our pass rate is accredited to the general decline in the South African Education system and the very poor primary school preparation experienced by the children and change to Outcome Based Education system implemented yearsa go.

4) 70% of rural university students drop out in their first year. 10% only graduate their 4yr degree. Our first group of graduates graduated in 2012, all are employed in the private or goverment sector. Limpopo has a youth unemployment rate of 48.8%.

5) 10% of all natural deaths for children aged between 0-18yrs is suicide related. We have had no suicides in 10yrs

6) Non of our children, once they have joined the program, have been involved with crime of the police

7) Non of our children, once they have joned the program, use alchohol or drugs

9) We have now trained over 30 young adults who grew up in the process who have now decided to return as young adult leaders to be a role model and mentor other children.

10) We work into 91 different sites around Greater Tzaneen Municipality

11) Every child under the age of 18yrs has a birth certificate or Identity Document. This allows them to access free goverment services ie schooling, health services and also enables them to gain employment for the future.

We work with the parents of the children to create positive relationships within the families to promote cohesion:

“Before my child joined KTD196 he was always out late at night and being a bully. I always thought he was going to turn out like most youngsters who have given up on their dreams and are wasting their lives away. Since joining KTD196 he no longer drinks and his behaviour has also changed. I ‘ve also learned to communicate with my child and not yell at him,” explains one parent, Maite Mametja. (except taken from http://www.ngopulse.org/article/limpopo-based-npo-develops-winning-formula-youth-empowerment

Through your support we are literally changing children's lives, families and whole communities. We use the Scout Program particularly the Food For Life project as an entry point to do so much more. We are a staff of 3 full time and 6 part time people. Your support enables us to do so much. THANK YOU is so minimalistic in what want I want to convey but it is the only word I have. Louise

Voice of the Child:

I have made a lot of bad choices and decisions after leaving Scouts at aged 17. I did things that I wouldn't have done if I was still a scout. I decided to stop going to scouts early last year and since then life became hard for me in some ways. Scouts helped me get where I am today, if it weren't for 1st Shiluvane Scouts I wouldn't be in varsity. Scouts disciplined me, gave me focus and enabled me to have dreams. I then decided to enroll myself with the university that best offers law (LLB) University of Limpopo.

After quitting Scouts I lost focus, my mind was all over the place, I neglected my studies and I would stay in my room whenever I didn't feel like going to class. I didn't know why I was studying, I lost interest and just wanted to have fun. At least I managed to pass 8 out of 10 courses, it was not bad at all but I know I can do a lot better than that. I just needed to focus and I know that at Scouts that’s where I’m going to get motivated, that’s why I decided to go back.

Scouts is the best campus one can ever have. My mother is never around, her life is in Johannesburg, I have been growing up alone, I had no one to guide me but Scouts gave me all the guidance I needed. Scouts helped me make wiser decisions about my life. I even started drinking which was the most stupid move I have ever made, I would drink to get intoxicated because that was my way of having fun.

Intoxication lowers thinking and reasoning capacity, so I did crazy and stupid things due to intoxication and some of those things nearly cost me my life. I reached a point where I felt that life was just not worth living. I then decided to commit suicide by taking an overdose of pills. Fortunately I was hospitalized in time and decided to keep this a secret from my family.

Life was just hell for me last year but I brought this on myself. After all this I sat down and did some introspection. I realized that I got lost the moment I left Scouts and stopped living like a Scout. I finally decided to go back to Scouts and joined 1st Shiluvane Rover Crew. I’m doing much better than last year and this year, with the determination that I have, I'm going to bring out the best in me and I know that with the Scouts and Rovers in my life I will achieve anything I want to achieve. Scouts is definitely the way to go! Once a Scout always a Scout. 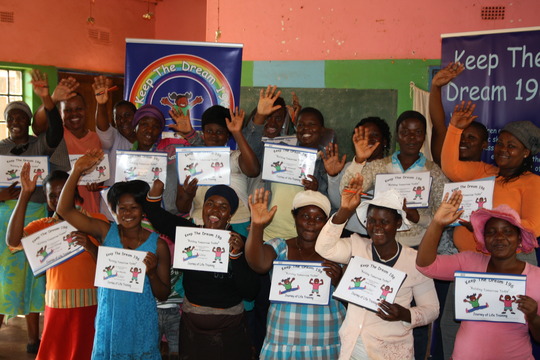 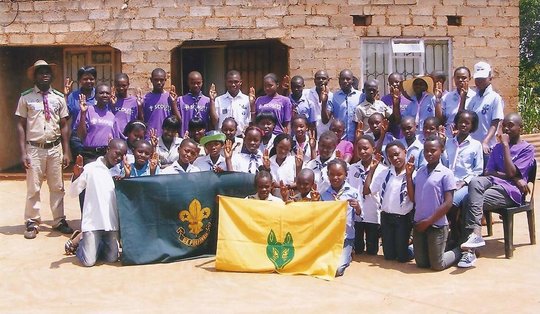 We are in full swing at Keep The Dream196, the year is going so fast that we are really peddling fast. Speaking of "peddling" Mark McNamara from Bike Africa completed his ride from Kampala in Uganda to Cape Town South Africa and through his hard work raised in excess of $12,500 towards our Global Giving target to become SUPERSTARS by April 2013. We have $1,709 outstanding to go and what a ride it was literally and figuratively. If you are interested in donating go to www.keepthedream196.com

At a time when money is getting tighter people from America, Taiwan, Australia, Canada and South Africa have dug in their pockets to help us achieve our goals. I cannot tell you how it has inspired and encouraged us to keep going as a team that people out there care and are willing to show that care by putting their money into our hands for the future of our children. It is very humbling as I know people are doing it tough out there so thank you. From the bottom of our hearts THANK YOU!

Well, the great news from Keep The Dream196 is that 10yrs ago we started with 13 girls in a small village called Shiluvane and now we are 2,500 children in 91 different sites around Greater Tzaneen and Venda (we have expanded into another district). However, that is not the only exciting news. Nkululeko Mabuza, one of those 13 girls was employed by Keep The Dream196 in January this year as a fully fledged Social Worker. She has returned to assist us to continue to build the future and she is determined to give back not just to us but also her community and the children we serve.

Our logo is "Building Tomorrow Today" and that is what Nkulu is doing with all her heart. It has been made possible by your continued partnership with us and ongoing giving. Its wonderful to see the 2nd generation working with and inspiring the 3rd generation to do their best and become all they can become. Each year we are becoming more sustainable through the work of the volunteers and now Rovers.

In 2013 we have brought Kheto Mongwe on to Keep The Dream196 again a Rover but this time he is with us for 12months and then will return to complete his Bachelors of Computer Science in 2014. It is wonderful to have the youth come behind us with their energy and enthusiasm and courage to take us further and higher than either myself of Elizabeth (Co-founder) thought possible. Louis Mawila has joined us as a Rover to assist all the different Scout Troops in Greater Tzaneen. Well done guys.

Rovers are the third branch of scouting. They are aged between 19-26yrs and we have 3 new crews because the kids just want to continue developing themselves and others to the point last year we were able to support 3 Rovers short term and now have been able to return to school in 2013 because of working with us last year.

I hope you enjoy this newsletter and are excited about the work we do, the achievements we have reached and the possibilities for the future. Please spread the news and WATCH THIS SPACE!!

In November 2012 we were visited by 1st Sasekani, 1st Gavazza and 1st Burgersdorp. We are sisters, we are brothers, we are friends and we work together as a team. On that day we were having a lot of fun, we were playing games, learning and doing different activities. We have learnt a lot of things eg we learnt about how teenage pregnancy affects our community. We made a decision about how to solve this problem We have decided to keep our teenagers busy by fixing roads because the roads have a lot of potholes and even cleaning our schools.

So this year 1st Gavazza, 1st Burgersdorp and 3rd Burgersdorp have started to fix those roads together with our school principal. In July he is going to help us with material likes stones and bricks and other stuff so we can do a good job.