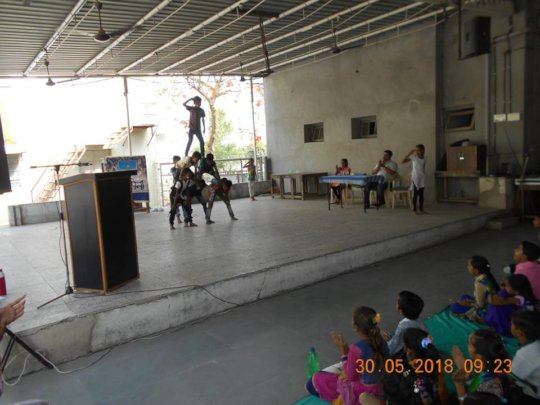 Wenlido is a self-defence training which is designed to improve the physical, mental and emotional capabilities of girl child happened in the month of May. 10 trainings happened during this period for three different age groups of Balsena and Tarunsena girls ranging from 7 to 11 years, 12 to 15 years and 16 to 19 years. We had a participation of 214 girls in these trainings.

On 30th May, 2018 we had a cultural event to celebrate the success of 12 days of vacation camp. Children have shown great diversity by performing skits, dance, speeches, songs etc. under different themes like cleanliness, patriotism, social equality etc. We had a participation of 218 children on this day. On this occasion our Guest was Shri. SarvadamansinghRana, the great grandson of renowned freedom fighter Shri. SardarsinghRana who prepared the first flag of India. He shared lots of stories of the life of this great freedom fighter and also showed a documentary film based on his life.

June, 2018 is the beginning of the academic year. We saw bundle of joy and enthusiasm among children as we started different activities in their respective areas. Through our regular Balsena activities, we reached about 745 children by the end of 30th June, 2018. Special programme like "Anti child labour day" on 12th June, was conducted to create an awareness among masses about the critical issue of "child labour". 124 Balsena children and many more children from outside joined the campaign.

By the month of July, we expanded to 8 more areas to conduct our activities. This makes the total 20 area points for Balsena activities. Apart from the regular area activities, 3 Balmelas were conducted on the theme of "Child rights". We had a participation of 145 boys and 127 girls in the Balmelas. Through different activities children got aware of the 4 basic rights of right to protection, right to survival, right to development, and right to participate. 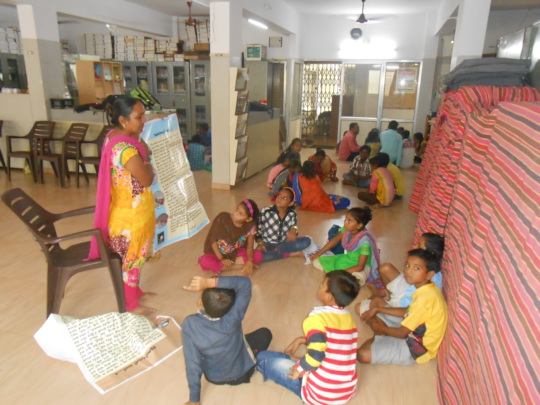 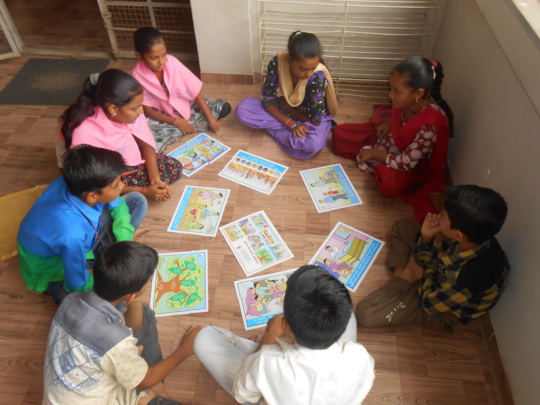 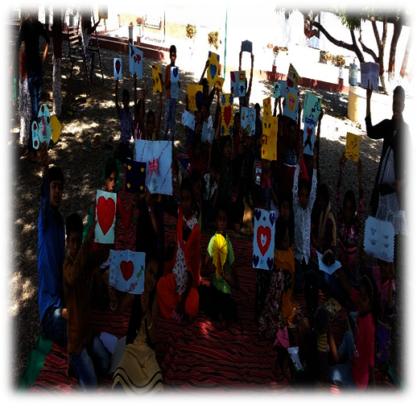 From 22nd April to 26th April, 2018 we had Mannar residential camp where children were exposed to activities related to Life skills. We had a participation of 58 children. All the children have actively participated and shared wonderful reflections.

Vacation camp happened from 8th to 20th May, 2018. This was around the theme of environment preservation and life skills. To make the best use of waste materials, children have used plastic to make banks, wall hangings and various containers to use in the kitchen. Other activities involved using their creativity to build complex origami houses. Film shows and Exposure visit to Museum and Auditorium were part of the vacation camp.

Nihar, one of the Balsena member said “Whatever Shaishav is doing is very important to us. My vacation time was properly utilized by learning about how to make different things with plastic and other used things. Whatever I have learnt here is very valuable for me and I would never forget them.”

Kusum, who is the president of Balsena Team said “I have seen children learning a lot by doing with their hands. A lot of skills have developed in the process. I have developed a new perspective towards environment and how to look at any object differently to use it in multiple ways.”

Wenlido training to improve the physical, mental and emotional capabilities of girl child happened in the month of May. 190 girls across different age groups participated in the one-day and two day trainings. Anjali who is a 10 year old girl said “This training is good. I know now, how to protect myself from getting beaten up from my mother.”Krishna who is a 13 year old girl said “I have learnt how to say “no” in any given situation and how to draw boundaries to protect myself.”

With the start of the new academic year, we have seen children coming to the one day training very enthusiastically. We had 2 Active and Council meetings in the month of June which was on “action plan” for this year.

One of highlight during this quarter was, Shaishav had celebrated its 25th anniversary with Balsena children on April 27th. Instead of blowing out candles on a cake, the children and staff chose to light a diya to signify their never ending hope that all children will have a safe and happy childhood. 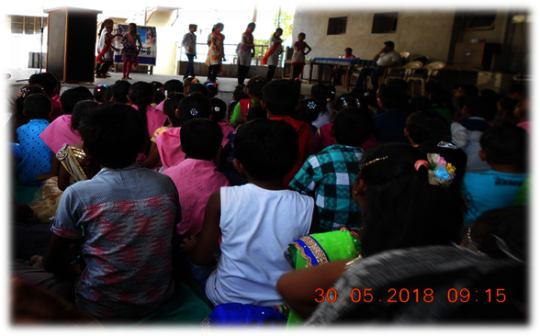 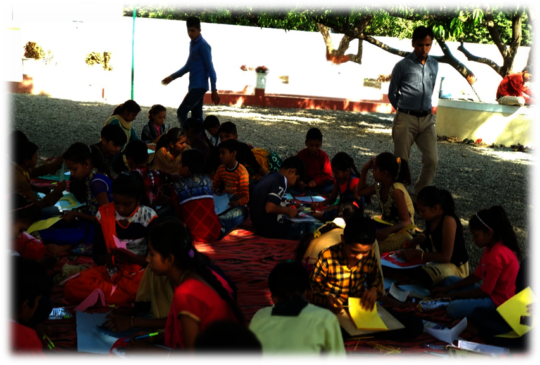 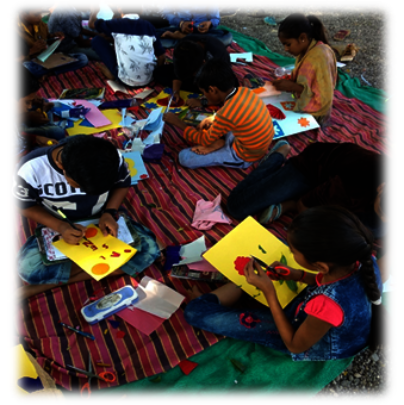 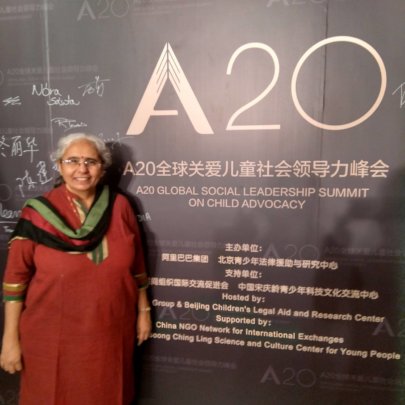 A20 Summit on Child Advocacy in Beijing

From March 17th through the 26th, Parulben attended the Global Social Leadership Summit on Child Advocacy in Beijing, China. Sponsored by the Alibaba group, this invitation only event brought together leaders in child rights from 20 countries to exchange ideas and recognize their achievements. Parulben gave a well recieved presentation on Shaishav's child participatory methods, its programs, and what our Child Rights Training and Resource Center offers.

The event was organized by Beijing Children’s Legal Aid and Research Center. The Center was established in 1999 and received special consultative status with the UN Economic and Social Council in 2011. It is the most influential child protection organization in China. Only one person from each country was selected for this summit and Parulben was India's representative at this prestigious event. Congratulations to Shaishav and Parulben on this great achievement!

Vacation camp is underway from May 8th through the 20th and this year's focus is environmental preservation and life skills. Plastic bottle were recycled into banks, wall hangings, and various containers to use in the kitchen. Other activities involved using origami to build paper houses, greeting cards, and various paper animals and objects. The children especially enjoyed using their creativity to build complex origami houses. Some even created two story homes with stairs, pools and backyards! A Hindi version of the famous Pixar film "Rio", the children really enjoyed it and took home the film's message on letting animals be free. Finally, the children also toured the Bhavnagar auditorium next door. The staff was kind enough to provide a tour of the stage, sound system and galleries in the building.

In other very special news ,Shaishav celebrated its 25th anniversary with cake and Balsena children on April 27th! Instead of blowing out candles on a cake, the children and staff chose to light a diya to signify their neverending hope that all children have a safe and happy childhood.

Here is what Parul, Shaishav's co-founder had to say about the special occasion:

"Happy to inform all of you that today we completed 25 years of Yatra in Search of Childhood through Shaishav! Yes, Shaishav completed 25 years today! Such a transforming, fulfilling, satisfactory, joyful time with most beautiful energy of the world called Children! I pray and wish to continue to work for rest of life and in future lives if there is. Only one pain is that while we see lots of changes at personal level, at the societal level, the children's situation is becoming worst then ever! Promises to keep and miles to go before we sleep!"

Upcoming in the end of the month will be the annual board meeting at which Shaishav is excited to share this year's acheivements, challenges and future plans. 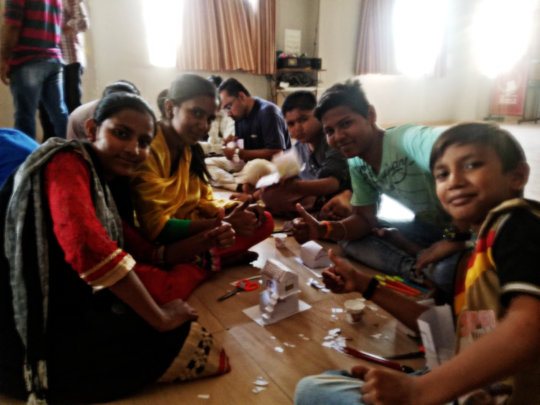 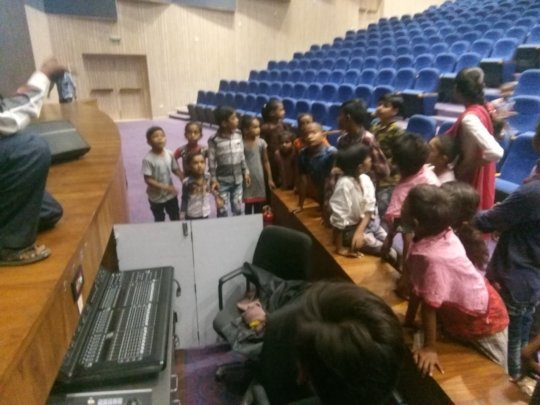 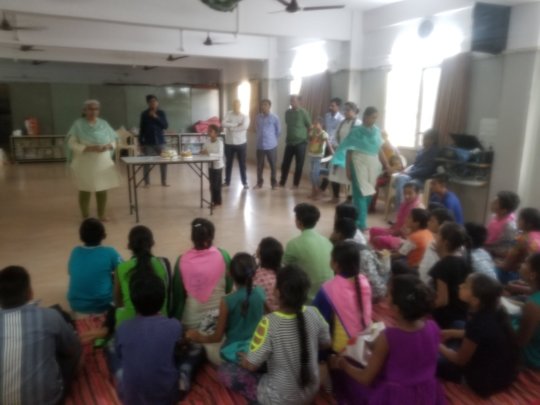 Shaishav's Anniversary Celebration
‹ 1 ... 5 6 7 8 9 10 11 12 ... 28 ›
WARNING: Javascript is currently disabled or is not available in your browser. GlobalGiving makes extensive use of Javascript and will not function properly with Javascript disabled. Please enable Javascript and refresh this page.