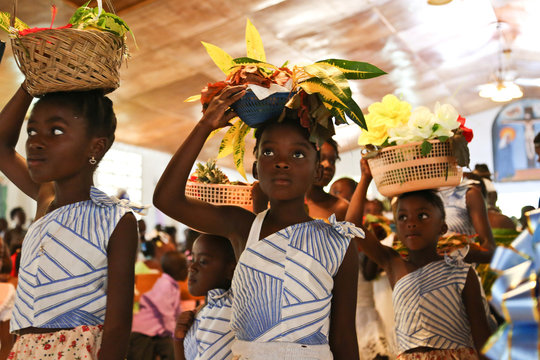 Students, teachers and families at St. Paul's School in Petit Trou de Nippes, Haiti really know how to throw a party! For months eyes were set on the weekend of Jan. 25th, 2014, which marks the 25th Anniversary of the founding of St. Paul's School. Begun under thatched roofs and stand-to's, with children gathered around teachers with no books or blackboards, St. Paul's now welcomes 700 students from pre-school to 10th grade to a modern and expanding site developed to be the best school in the region. St. Paul's staff and students had worked hard to become a government-recognized Center of Excellence, and they were ready to celebrate!

Dignitaries, political, social and cultural, poured into town for the weekend. Three visiting choirs joined their voices; parents brought gifts real and symbolic of their commitment to the school, and to show thanks for what the school does for the children. Madame Odette, one of the school's founders and behind-the-scenes provider of whatever is needed, received an award from the Colorado Haiti Project, which sent down 15 representatives. Some of the American guests were board members, former educational or medical mission trip participants, and long-standing supporters of the school.

Jean Fritz spoke at the party of a dream he had had over 25 years ago, that three men would come to the village and start a school. When three Episcopal priests showed up, he told them he had been waiting for them! And Guillot Tibert lived on the grounds of the school for many years, attending St. Paul's and now returned to it as bookkeeper, computer science and educator and star former pupil, who received a scholarship to higher education.

We hope you can taste some of the fun, music and celebration of our 25th Anniversary party through pictures and video on our website. And those of you that supported us last year, we invite you to donate now to the school in 2014 in increments of $25 in honor of our anniversary, to support the education of over 700 children. Thanks for everything you've done, and may do! 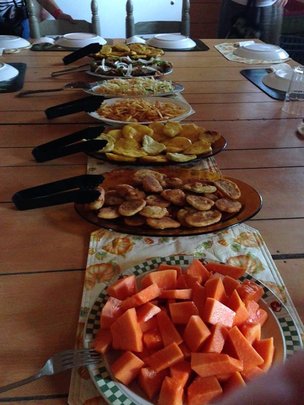 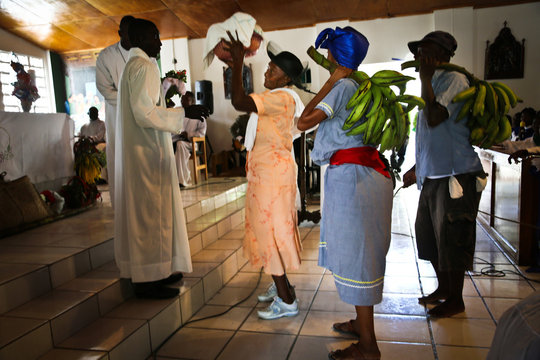 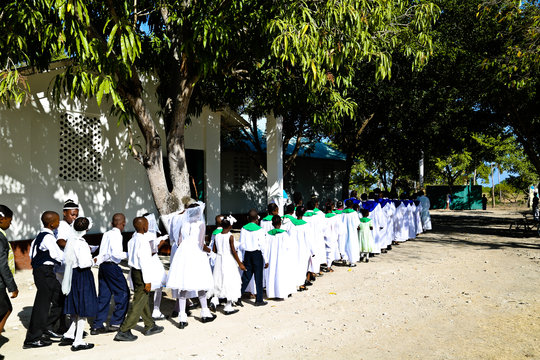 The Stars of the Show 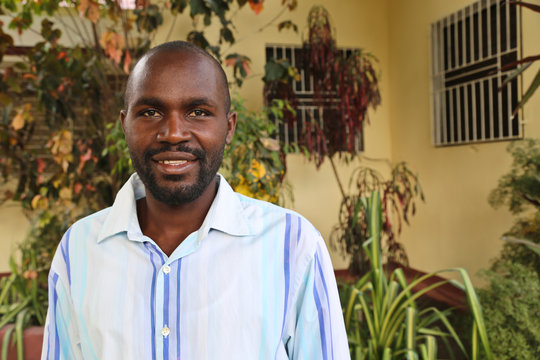 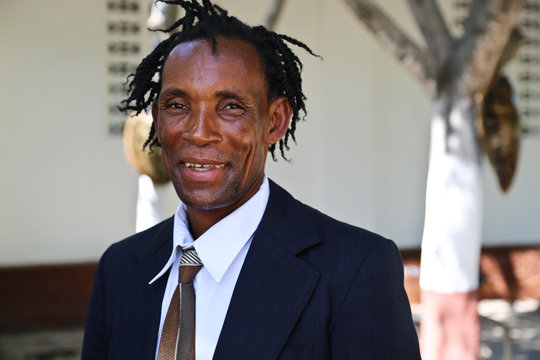 Jean Fritz, Who Had a Dream

The Latest We Are Thankful For! 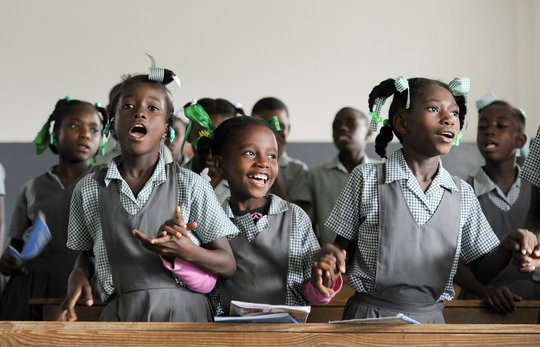 Singing in any Language is a Joy!

As Thanksgiving approaches in the U.S., here's 4 things St. Paul's School in Haiti is grateful for that you made happen through your donations:

-St. Paul's received a Certificate of Excellence from the Haitian Ministry of Education, based on the 100% positive exam results for our 6th and 9th grades at the end of the 2012-2013 school year this summer.

- more scholarships have been added in the 2013-14 school year for students in 11th grade and above to continue their education after they finish at St. Paul's.
- A group of our educators at St. Paul's this month taught continuing education for the Haitian teachers in English as a Third Language, after Creole and French.  A couple of them were musicians, and taught the children to sing Row, Row, Row Your Boat (for the youngest) and Michelle, My Belle (for the older). The "r" and "th" sounds are especially hard to learn, and this made it fun, the kids had a ball!
And we're especially pleased that a graduate of St. Paul's has returned this year--as a TEACHER, after getting her advanced degree in education. Long-term community capacity building is happening, with your help! We hope you will remember our children and their families this time of year. Joy and blessings to you and your loved ones! 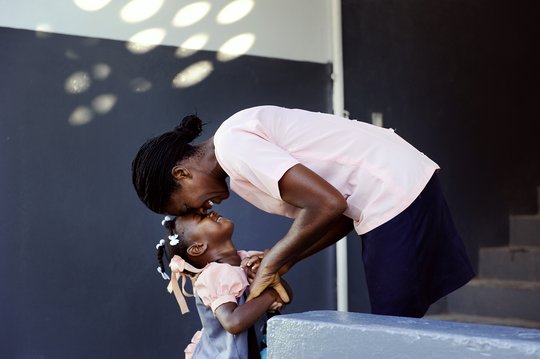 I Love My Teacher 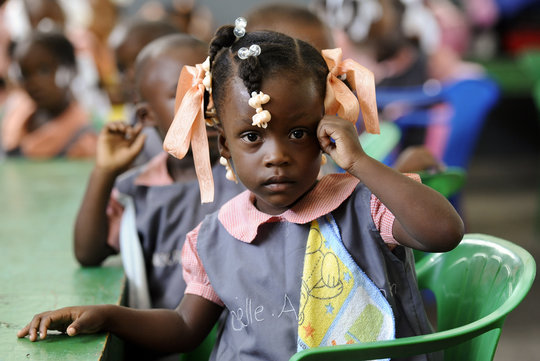 I'm At School Because of You! 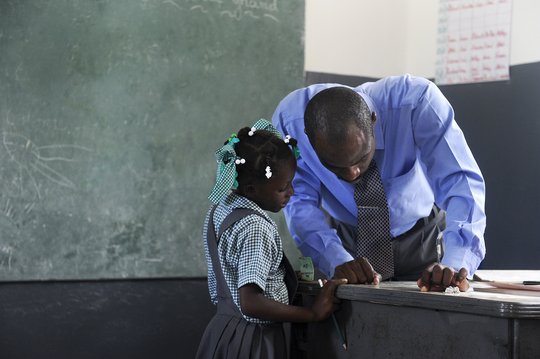 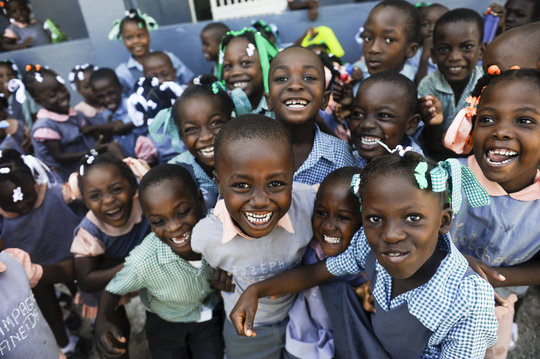 The Children of St. Paul's School

You did it! Global Giving donors gave Colorado Haiti Project the first $9,600 so 32 children can start school TODAY, Oct. 1st, at St. Paul's K-10th grade School in Petit Trou. MERCI to all who helped these kids get an education that helps them live longer, find a livelihood, and support their own families one day. And thanks to all the faith communities and friends who help the over 600 other school kids, too. These are gifts that LAST.

You remember bringing your children to their first days of school. They are shy, excited, looking around for old and new friends; you are anxious, grateful, ready to hand them on to excellent teachers who will continue the world-opening experience of a good education. Over 700 children and parents are going through those emotions, feeling that hope, this very day. The attendance is skewed to the younger grades, including 3-5 year olds in the earliest grades; we also have youth in their teens hard at work in the upper grades, some of whom will receive scholarships to trade schools or university for degrees and professions they will bring back to their home community. Imagine their pride in returning home to be a teacher at St. Paul's, a plumber, an electrician, a construction specialist, an agronomist, a physician or health care worker in Petit Trou, which critically needs their expertise.

The school year will run into July, 2014. All teachers, staff and administrators are Haitian. We will occasionally send down Colorado volunteers at the request of the school--experts in English as a THIRD language (Creole & French produce tri-lingual kids), geography, and however else we can help. We have asked Global Giving to leave our school donation page open, so we can raise up to $15,000, which at $300 per child would fund 50 children for the year. Thanks to all who've extended a generous hand so far, and Bienvenue to all we hope will join us to create a more positive and possible future for these kids and their families. 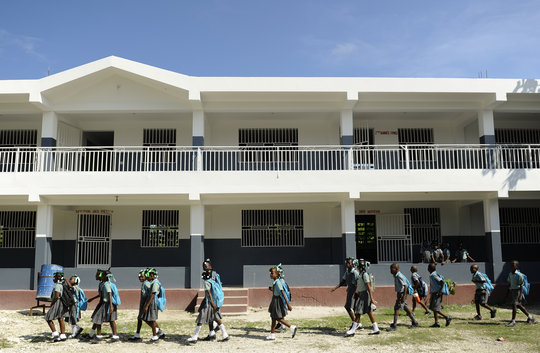 Lining Up in Front of St. Paul's 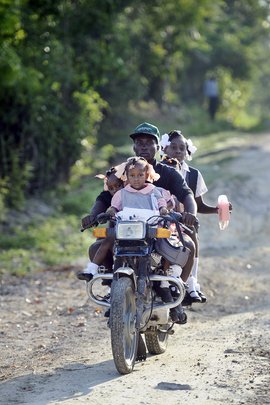 Daddy Bringing Us to School