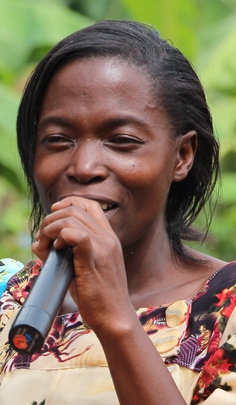 Thank you for getting me out of the dust and from being nobody….

Jackline, one of our first borrowers, a designer of the loan program, and now head trainer, wrote us an email last week that began:

With much joy and honor I want to take this opportunity to extend my appreciation and gratitude to WMI and to all Donors for the tremendous work done in my life in the following areas;

Without WMI (Women’s Microfinance Initiative) I wouldn't have gone this far. I remain thankful and grateful for the treasure WMI has given me. LONG LIVE WMI.       Jackline

We met Jackline almost eight years ago. She was a young mother in her late 20s with five children to support. Her home in Buyobo, Uganda lacked electricity, running water, and basic sanitation. It had a thatch roof, mud floor and the walls were plastered with cow dung. Despite these living standards, Jackline was better off than many - she was trained as a teacher and spoke English (her native language Lugiso is not written, so most education is in English). This skill brought her to us and she helped launch the loan program with 19 other determined women.

Philanthropists are always looking for hard evidence that their efforts are productive. Academics are always coming up with new theories. Today they focus on “metrics” as the measure of productivity. How many people were helped? How many shots were given, mosquito nets delivered? While these measures are important, they can also be manipulated and they are often difficult to verify. And, do they really measure lasting impact? This is something we at WMI look at all the time. We have realized that our village-level focus, being embedded in a small geographical area, has afforded us something very important: the opportunity to witness change over time. Not only do we see visible evidence of the change, the women also share ongoing narratives of how life has improved since the loan program launched.

Each of our 14 village programs has a small loan fund and costs less than $70,000 to set up. The programs are directed and run by local women and are designed to run self-sufficiently from the interest income generated by the revolving loan fund. This small amount of money has spawned change that is permanent. Visit Buyobo and you will see the new businesses – originally run from a mat on the ground, they are now housed in brick structures. You will see the children thriving and learning – and now going off to college through the profits from their mother’s businesses. You will see improved housing – concrete floors when a dirt floor once sufficed; tin roofs replacing thatch. You will see families working together on their businesses – and a significant drop in domestic violence. To see the change, all you have to do is look.

On behalf of the thousands of rural women and their families who have benefited from WMI, we wish to extend our sincere and heartfelt gratitude and appreciation to all of you for your generous support towards improving their social and economic conditions.  Your invaluable contributions have transformed the lives of a rural woman in profound and permanent ways. Without your support, all of this would not be possible. Thank you so very much. 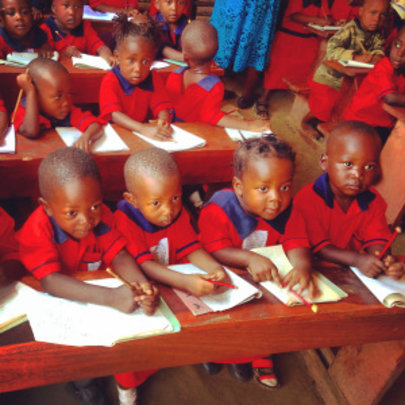 Along with running the WMI loan hub, our staff  are also teachers in Buyobo or nearby villages. It is a requirement our staff to be literate in English, and this targets the local teacher population. These women teach, coordinate loan groups and office operations, while also running businesses and raising their families. They are an impressive group of women!

Penina, one of the Local Coordinators, founded and directs her own primary school in nearby Budadiri: Ambassadors Preparatory Nursery & Primary School. She started her school in 2011, teaching four kids out of her living room. Four years later, another 130 young students have joined the original class, and the school has expanded to nursery through Primary 3.

Before starting Ambassadors Primary, Penina had been working at a school that honored her for her teaching but did not pay her for a year. She says it is much better to work for yourself! In order to expand, Penina used her four successive loans from WMI to rent a few shops in a row, construct a wall to close them in from the road, build an additional classroom, and buy desks.

Songs are built into the students’ daily routine. After a break in the courtyard, kids move off to their respective classrooms singing “class, class! We go to class, class, class! We go to class!” If a student volunteers or answers questions correctly, the teacher has her/him stand up with hands on hips, and do a little dance while classmates clap and sing: “Lovely, lovely, nice, a very good girl/boy!” Alternately they might give their classmate “flowers,” reaching their arms towards the student and waving hands for a few seconds in recognition. To remind students to sit still, teachers have them sing “I am sitting like a boss, boss, boss. I am a boss, boss, boss.” With their arms and legs crossed, they sit back in their seats and look silently all around them, like the big person in charge.

Respect for others, being humble, loving one another, and sharing: These are the leadership qualities that Penina exemplifies. She says to a fault she is slow to talk about her achievements. She prefers to let parents tell their neighbors about the school, and has expanded through word of mouth about the quality of education. Humble as she may be, Penina is ambitious too! She says her next steps are to own the land she rents and expand over the next seven years to a full secondary school. She wants to teach the original students all the way through up to college.

Today, Global Giving will give a 30% match to your contribution to Women’s Microfinance Initiative.  Won’t you take a minute to make a donation to support WMI’s loan fund and give another woman like Penina the opportunity to make her own business dream come true?  Thank you so much for your support!

I am now a wise woman! 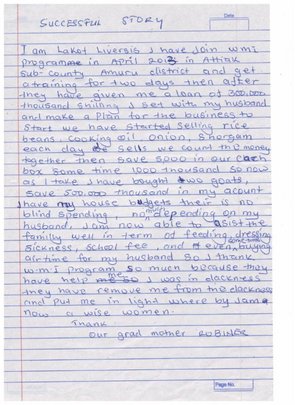 Letter from a Borrower

We wish all of you a very happy and healthy New Year! Your support of Women’s Microfinance Initiative during the past year has been instrumental in fostering healthier and happier lives for our rural women and their families. With your donations, our lending and financial education program has reached over 5,000 women and their families. Since our inception in 2008 we’ve made over 15,000 loans totaling nearly $2,500,000. And most important, we’ve been able to continue our track record as a high performance/low overhead organization. Our feet on the ground are the ladies in the loan program who provide the local administrative infrastructure. There are no high priced consultants involved in WMI – only high quality, village-level staff members who have taken ownership of the program and are vested in its success.

We think you will enjoy this letter from one of our Uganda borrowers. She lives in a very rural area near the South Sudan border. In her own handwriting she tells her “Successful Story.”

I am ______. I have join WMI program in April 2013 in Attiak sub-county Amuru district and get a training for two days then after they have given me a loan of 300,000 shillings (about $150) I set with my husband and make a plan for the business to start. We have started selling rice, beans, cooking oil, onion, sorghum. Each day we sell we count the money together then save 5,000 in our cash box. Some times 10,000. So now as I take I have bought two goats, save 500,000 in my account. I have my house budget. There is no blind spending, no (much) depending on my husband, I am now able to assist the family well in term of feeding, dressing, sickness, school fee, and even sometime buying airtime for my husband. So I thank WMI program so much because they have help me. I was in slackness. They have remove me from the slackness and put me in the light where by I am now a wise woman.