Jack's story of success, thanks to your support

Angry and disillusioned with school, Jack, 15, from Bristol, felt his future was slipping away. But after taking part in The Prince’s Trust Fairbridge programme, Jack re-entered education and is now looking forward to a promising career as a mechanic.

Frustrated by his dyslexia and disruptive in lessons, Jack was excluded from class and sent to a segregated unit within his school, where he spent the next three years.

“I wanted to do well, but it felt like everyone was against me, like I wasn’t worth believing in. I didn’t want to end up on the rubbish heap, but felt my future was slipping away - that I’d drop out of school with no qualifications and no prospects and possibly turn to crime.”

But then Jack started to attend Fairbridge, a Prince’s Trust programme aimed at empowering young people to turn their lives around. Beneath all his anger, his programme tutors saw how bright Jack was, but helping him see the potential they knew he had was a challenge.

Sometimes Jack engaged, and sometimes his anger got the better of him. But whenever he did well, his tutors commended and encouraged him.

“Mostly I didn’t want to hear or believe their praise; but part of me did. Then one day it all made sense. Everything they’d said. I went to bed one night and when I woke up, I knew I had to stop wasting my time and make the most of my education.”

He threw himself into Fairbridge and was one of the first young people on his programme to complete his Prince’s Trust qualification. Jack is now on the Connexions Choices programme of full time education and has a place at college for the next academic year on a mechanics course, a profession he wants to pursue as a career.

"Thanks to The Prince’s Trust, I’ve got something I never thought I’d have: a real future, and it feels great."

Thank you for supporting young people like Jack by donating to this project for The Prince's Trust.

How Dan transformed his life with your support

Dan, 26, was a professional soldier, but returned from Iraq after the birth of his second child feeling physically and mentally exhausted. Suffering from flashbacks, he concluded the army was no longer for him.

Once discharged, he went through a series of low-paid jobs to support his family. Around this time, his relationship ended. Dan gained sole custody of his two children and moved into his own house. With little support from his family he was barely getting by, experiencing periods of depression and loneliness. Doubting his abilities, Dan had lost confidence and belief in himself.

He had previously had the idea of starting his own gardening business. With both children soon to be in school, he thought it was a good time to focus on his future. While seeking advice, he joined The Prince’s Trust Enterprise programme, a scheme helping young people interested in self-employment explore their ideas in setting up a business.

He found the speakers on the course particularly inspirational. They made him realise anything is possible if you put your mind to it. His time on the programme gave him the desire to be a success by learning from his mistakes. With renewed confidence, Dan found the motivation to move forward. With support and funding from The Prince’s Trust, he started his business, Gardeners R Us. With several regular customers, including an estate agent, it is doing well.

Today, Dan is a different person to the world-weary ex-soldier he once was. With ambitions to expand his business, he has lots of ideas. However, Dan’s main goal is to provide for his family and be a positive role model to his children.

Dan said: "With amazing support from The Prince’s Trust I have achieved a lot in 18 months. In the past I had many dark days, but now my outlook is positive and I can see a bright future."

Another success story made possible with your help 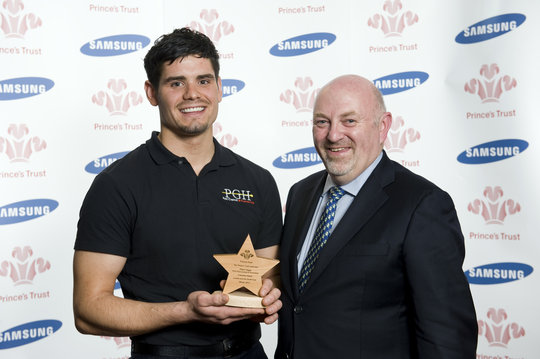 Peter receiving an award for enterprise

Peter encountered difficulty in secondary school while dealing with bouts of anxiety and stress. He moved between numerous children’s homes, boarding schools and secure units, and this instability badly affected his education, leaving him without basic communication and numeracy skills.

During this time, Peter discovered a passion for wildlife. He began to see a positive future in starting his own pest control company, but with missed school time and no solid working experience within the industry, he felt this was perhaps too much of an undertaking.

Facing financial insecurity, depression and isolation owing to his rural location, Peter enrolled on The Trust’s Enterprise programme, a course for young people who need support and funding to realise their business potential.

With the help of a business mentor Peter developed his business knowledge and the got the support he to set up his company, PGH Pest Control and Prevention. The process enabled Peter to overcome his difficulties with numeracy and literacy, which counted a long way towards getting him on his feet.

Since his engagement with The Trust, Peter’s communication skills have improved too, allowing him to form successful client relationships. The business has massively exceeded its financial targets, and Peter is looking at the possibility of diversifying into other areas to meet demand from his regular customers.

Your donation could pay for the written materials used by a talented young person like Peter who needs guidance to set up their own business.