Building a Legacy of Bonobo Research at Kokolopori 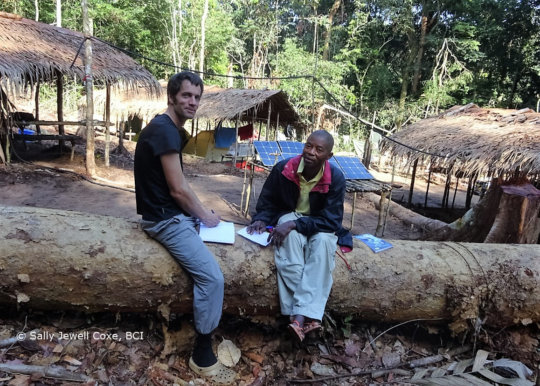 BCI President Sally Jewell Coxe has just returned from a trip to Kokolopori Bonobo Reserve. The main objective of this trip was to establish a new research project in partnership with the Max Planck Institute for Evolutionary Anthropology. Under the guidance of Dr. Martin Surbeck—a primatologist who has previously studied bonobos at Lui Kotale near Salonga National Park—the project aims to gain greater insight into how individual bonobos and their groups interact.

In early March, Sally and Martin, along with the rest of our team made a two week journey up the Maringa River, from BCI’s regional office in Mbandaka to Kokolopori. Along the way, they were treated by the sight of hippos in the river! Once the team was settled in Yetee, headquarters for our conservation programs at the reserve, they began process of setting up a forest research camp and orienting local tracking teams (led by longtime supervisor Leonard Nkanga Lolima) for the project.

The Yetee forest is home to two habituated bonobo groups (Ekalakala and Nkokoalongo), offering a rare opportunity to observe bonobo groups interacting in the wild. The team was fortunate to witness the two groups meeting and interacting while the camp was being constructed. This bodes well for the kinds of data and insights that the Max Planck research team will be able to collect.

This project would not be possible without the years of investment in the communities of Kokolopori and the research projects that have come before. Through the generosity of our donors, we have been able to train, equip, and employ local trackers to monitor bonobos in their forests. This foundation of local knowledge has been instrumental in attracting the interest of researchers, like Dr. Deborah Moore, who conducted a pilot study at the reserve two years ago.

Martin is enthusiastic about working with local people, and is keenly aware of the importance of local involvement in conservation within communities. He plans to collaborate with Congolese students in his research, to train a new generation of conservation advocates and ensure that the knowledge gained from his research benefits the Congolese people.

P.S. If you were wondering about the orphaned bonobo that was rescued over Christmas…Sally also paid a visit to him at the Lola ya Bonobo Sanctuary. Bikoro is thriving and has become quite a playful bonobo! He is in the capable hands of the “mamans,” who care for infants until they are ready to be integrated with the other bonobos at the sanctuary. 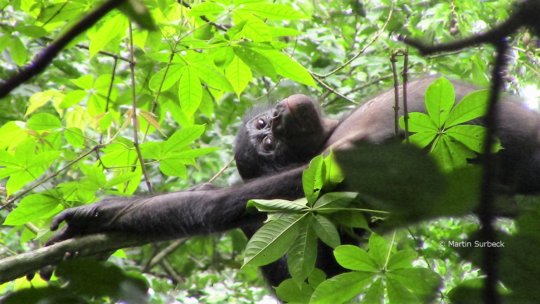 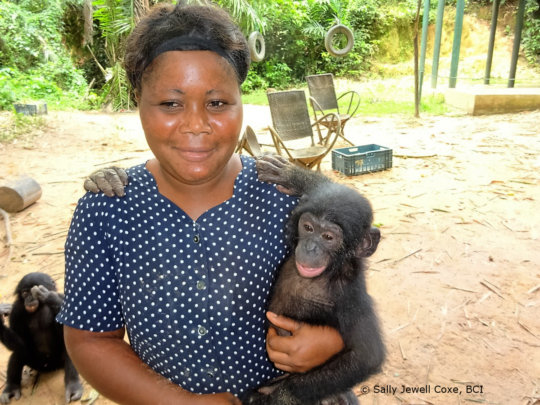 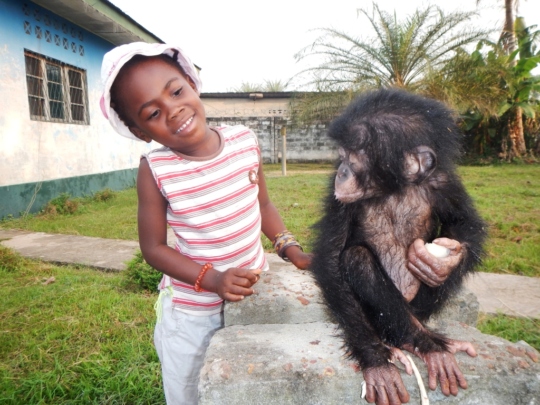 Bikoro in Mbandaka with a new friend, Sally

While most of us were winding down 2015 and spending time with friends and family, our team in the Congo was reminded that poaching doesn’t take time off. Our longtime colleague, Dr. Mwanza Ndunda (also known as Mpaka Bonobo, or "Grandpa Bonobo"), received a tip that a man was selling a baby bonobo in Bikoro, near our Lac Tumba site. Richard Eonga, bureau chief of BCI's Mbandaka office, and Dr. Norbert Mbangi, a Congolese primatologist who has worked on the frontlines for two decades, raced to Bikoro to rescue the baby. They encountered several difficulties on the path, including unpassable roads and floods, but they pressed on and confiscated the bonobo with help from the local police force. Our dedicated employees gave up much of the Christmas holiday with their families in order to stay in the office and care for our new friend.

Malnourished, stressed, and injured, the orphan quickly bonded with our staff. He was named Bikoro after the town where he was rescued, and affectionately nicknamed Noël in honor of the holiday. Bikoro took a particular liking to our dedicated team member Dieudonne Bahati Mwanza. Over the next week, Bikoro recuperated at our office while arrangements were made to transport him to the safety of the Lola Ya Bonobo orphanage near Kinshasa. He ate well and gained strength in his new surroundings—and even began climbing trees in the yard.

On New Year’s Eve, Bikoro was flown from Mbandaka to Kinshasa via Air Kasai. BCI’s Kinshasa team met him and he was transferred to the care of our friends at the sanctuary. A veterinarian assessed the orphan, estimating that he is approximately 4 months old and in otherwise good health. As a precaution, he has been placed in temporary quarantine, in order to assure the health of the other orphans at Lola. Soon, our new friend will have a chance at a happy and safe life with new bonobo companions at the sanctuary.

This story reminds us that, more than anything, we need to put an end to the hunting and selling of bonobos. For every orphan rescued, others have been killed, including the baby's mother. It is urgent that we provide greater support for our field teams near Lac Tumba, and throughout the Bonobo Peace Forest. This bonobo was rescued thanks to a tip from a community member and thanks to our network on the ground. It goes to show how crucial our work is, and how it requires participation and support from so many people. It takes a village—and then some!

As always, thank you for your support. Let’s make 2016 the best year ever for bonobos! 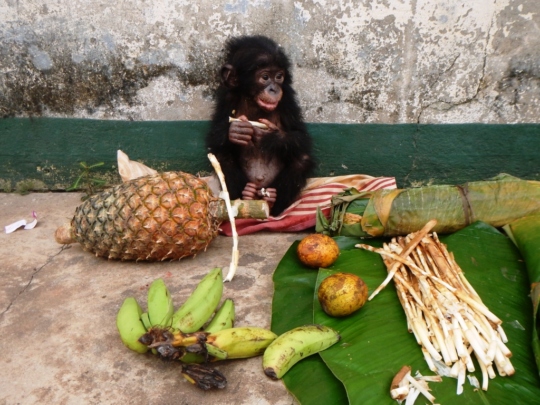 Bikoro and some much-needed nourishment 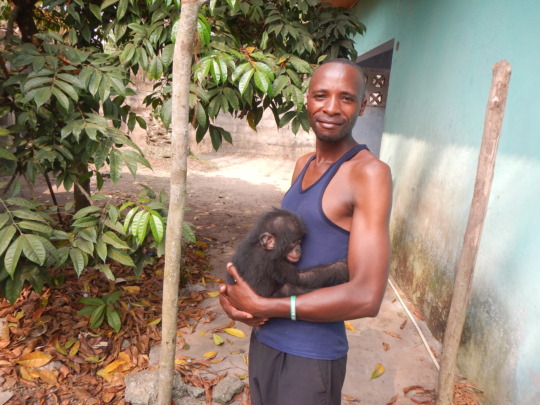 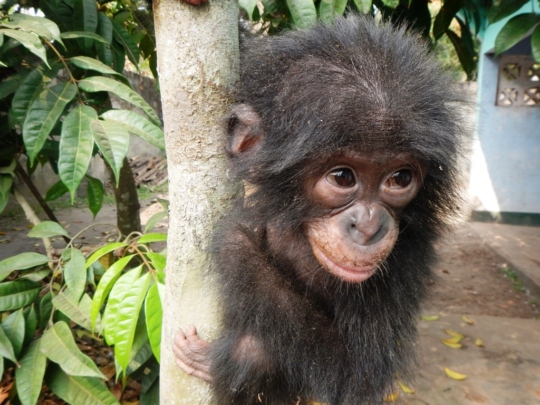 Are bonobos speaking our language? 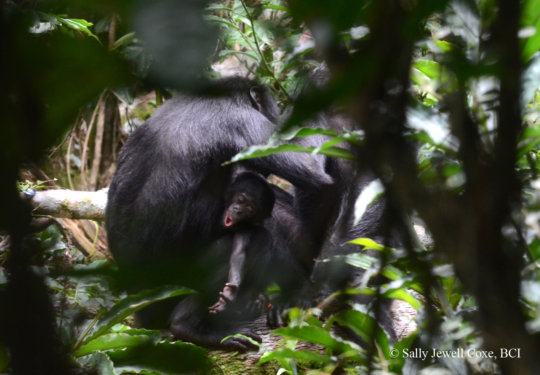 The results of a recent study of wild bonobos indicate that they use sounds to communicate in a way previously only thought to occur in humans. Zanna Clay and her research team recorded bonobos and their signature “peeps” across a range of behaviors (feeding, grooming, greeting, alarm responses, and many others). Analysis of the acoustical structure of the peeps showed that the same sounds were made in a variety of contexts. This phenomenon—known as functional flexibility—is not unlike the babbling sounds that human babies make before they learn language. It also differs from other primates who use specific calls in specific situations. This discovery, Clay proposes, provides insight into the evolution of human speech.

Communication is the cornerstone of BCI’s work with our Congolese partners. We take the time to talk with and listen to the people whose lives and livelihoods are impacted by our programs. In true partnership, we work together to develop solutions to both protect bonobos and to benefit the communities who are on the frontline of conservation efforts.

This approach recently paid off at the Lilungu site, where we are in the process of helping our indigenous partners to legally protect their forest. News of the success of our programs has spread by word of mouth—and now, neighboring communities have requested to join in. This will double the area of the bonobo habitat protected to nearly 5,500 square km!

But, we need your help to achieve these goals. Your donation supports vital, on the ground efforts to protect bonobos every day—and to secure their rainforest home for future generations.

Thank you for standing with us and please help to spread the word by sharing this update! 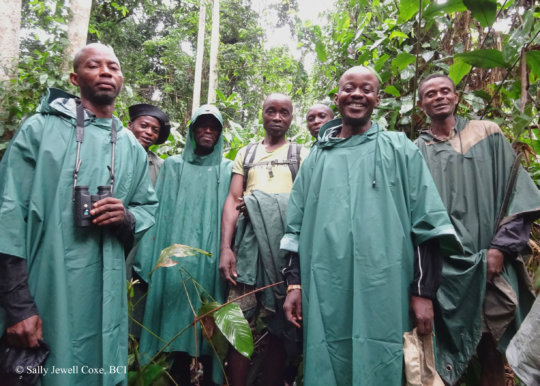 One of our dedicated bonobo tracking teams